“We don’t pay taxes; only the little people pay taxes,” is the infamous line attributed to Leona Helmsley — the hotel tycoon convicted of tax evasion in 1989. 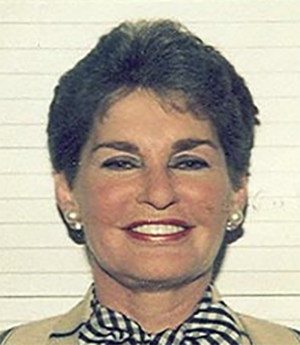 Helmsley’s mugshot from back in the day. We’ll save you the trouble of looking it up — the “Queen of Mean” did 19 months in prison and died in 2007.

Where Helmsley went wrong was using illegal workarounds to lower her tax bill. It remains a mystery why she ever bothered. Over the decades there’ve been scads of legal maneuvers available to her and her fellow billionaires.

We’re learning that once again this week with the leak of the tax returns of several billionaires — Bezos, Musk, Buffett, Soros, Bloomberg — to the nonprofit ProPublica news outlet.

Based on those documents, as well as other research, ProPublica says the richest 25 Americans pay an average 15.8% of their adjusted gross — less than most of “the little people.”

You can read about the details at ProPublica, or at dozens of websites with their Top 10 Takeaways or whatever. Our purpose in bringing it up today is to point up the hypocrisy of the wealthiest elites — i.e., Warren Buffett bemoaning how “the wealthy are definitely undertaxed relative to the general population” — and to warn about a bait-and-switch that might well ensnare you.

Before we go any further, a couple of things to remember when it comes to the topic of “inequality.” We reprise our words from January 2015…

With that, let us proceed…

In the first place, we’re dumbfounded by the naivete of the ProPublica reporting team.

“We were pretty astonished that you could get [tax] down to zero if you were a multibillionaire,” says senior reporter and editor Jesse Eisinger — a Pulitzer Prize winner who’s covered the business beat for scads of mainstream publications for over two decades.

“Actually paying zero in tax really floored us,” he tells the BBC’s Today radio show. “Ultra-wealthy people can sidestep the system in an entirely legal way.”

They can borrow against the wealth they’ve built in their companies.

As long as they don’t sell shares and don’t collect dividends, there’s no income and thus no tax. “They then borrow from a bank at a relatively low interest rate, live off that and can use the interest expenses as deductions on their income.”

While this ruse “floored” Eisinger and colleagues, it’s old hat to us — and to you too, depending on how long you’ve been reading these daily missives.

Indeed, this ruse is key to how wealthy elites make it look as if they’re standing up for “the little people.”

It comes back to a passage we’re fond of citing from the 2009 book Endless Money, by Baltimore-based money manager Bill Baker. Dealing with wealthy clients, he knows how it all works firsthand.

“Tycoons such as Soros and Buffett can call for higher taxation of income,” he wrote. “This is a very cynical and downright mendacious strategy, for they know full well this burden would fall primarily upon members of the upper middle class, who have not yet achieved the threshold that would permit them to shift income to tax-minimizing structures. [Emphasis ours.]

Thus, Google co-founders Larry Page and Sergey Brin “pay themselves just $1 in W-2 income,” Baker wrote, “but each year, they may accrue millions or even billions in unrealized capital gain.”

Under the present tax code, when Buffett and other billionaires finally meet their maker, their appreciated assets will not be not taxed as capital gains. Nor will their heirs have to pay capital gains tax unless they sell. And if they do, they’d owe tax only on the gains since their forebear’s death.

The Biden administration is looking to change that. The idea is to tax appreciated assets at death as if they’d been sold.

There would be an exemption on those assets — of $1 million per person, $2.5 million for couples.

Uhhh… Notice we’re not just talking billionaires now. We’re back to talking about the upper middle class — indeed, countless small-business owners, “little people” who’d like to keep the business in the family once they’re gone.

But doing so might be impossible unless the heirs have a pile of cash sitting around to pay long-term capital gains taxes as high as 43.5%. Otherwise, the only way to raise that cash is… to sell the business.

Gee, who might benefit from that? Why, Warren Buffett, for one.

Business owners already resort to life insurance as a vehicle to generate cash for heirs to pay estate tax. Buffett’s Berkshire Hathaway owns a huge life insurance business that might benefit from a steady stream of new customers who’d get hit by the new capital gains treatment.

We’ve lamented before how estate tax has eroded the local family-owned business in these United States. The current estate tax exemption is $11.7 million, generous by historical standards; a mere $1 million exemption on long-term capital gains would ensnare countless more businesses that would fall into the hands of billionaires.

Bottom line: For all the outrage over billionaires generated by the ProPublica documents, they will avoid the fallout. You, on the other hand, as one of the “little people,” might not be so lucky. Just a word to the wise.

Before we move on, a word or two about how ProPublica came into possession of these newsworthy documents.

For its part, “We do not know the identity of our source,” says ProPublica. “We did not solicit the information they sent us. The source says they were motivated by our previous coverage of issues surrounding the IRS and tax enforcement, but we do not know for certain that is true.

“We have considered the possibility that information we have received could have come from a state actor hostile to American interests.”

Ah yes, those dastardly Russians — or maybe Chinese or Iranians? — busily “sowing discord” among the American public because everything in our nation would be sweetness and light were it not for foreign “interference.”

Well, good on ProPublica for plowing ahead regardless. As long as the documents are authentic and in the public interest, they’re fair game. While its reporters shouldn’t have been “floored,” the returns do put meat on the bones of a long-standing tax strategy used by the very wealthiest that’s unavailable to nearly anyone else.

Privacy considerations, you ask? Not here. We’re not talking about the tax returns of everyday schmoes minding their own business. Nearly everyone who’s been exposed has sought to use his wealth and power to achieve one or another outcome in the realm of government policy — often to the detriment of “the little people,” as we have demonstrated.

To the markets, briefly, where it’s another “meh” day.

No economic numbers of note today; tomorrow brings the consumer price index and what will surely be a barrage of mainstream noise about inflation. We’ll be here to unpack it. 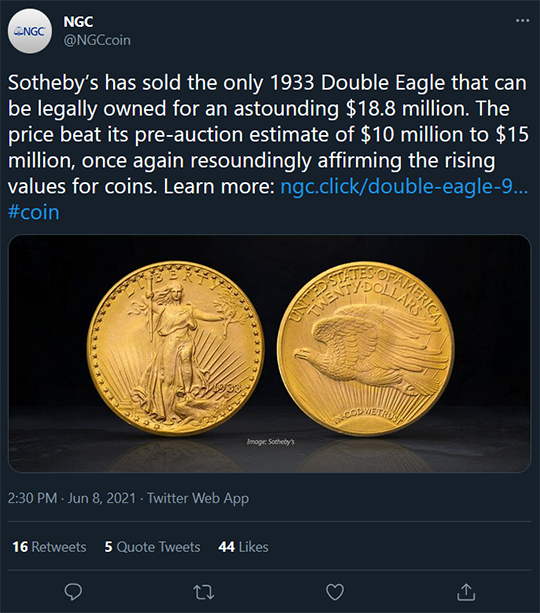 Oh, don’t get us wrong: The 1933 gold Double Eagle is one of a kind — never released into circulation after FDR’s gold-confiscation order. Only a handful exist, and this is the only one privately owned.

And the $18.9 million auction price at Sotheby’s yesterday is indeed a record for any coin, anywhere, anytime. The buyer’s identity is a mystery; the seller is the shoe mogul Stuart Weitzman.

Which tells us Weitzman had more money than sense. Plain ol’ gold bullion has appreciated 510% during that time.

Lesson: Deal with collector coins only if you know what you’re doing… or if the beauty and rarity have value for you that’s not monetary…

P.S. Coming into office, Joe Biden was keen to lower the current $11.7 million exemption on the estate tax.

Now? Crickets. Apparently that $1 million exemption on capital gains at death is a much juicier target.