Ahead of Biden’s meeting with Vladimir Putin tomorrow, one of our favorite independent journalists noticed the softball questions lobbed to the president… 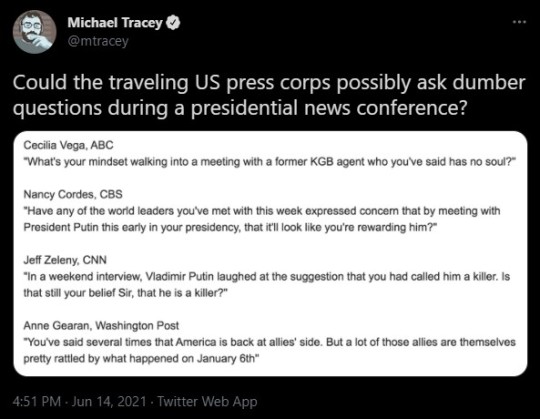 So while corporate mediaites fixate on the times Biden called Putin “soulless” and a “killer” — not to be confused with a soulless killer — they’re glossing over a high-stakes story.

After Washington saddled Moscow with a bundle of new sanctions in April, Russia’s doubling down on de-dollarization.

As it was announced at the St. Petersburg International Economic Forum last Thursday, Russia plans to completely excise the U.S. dollar from its $186 billion National Wealth Fund (NWF).

Finance Minister Anton Siluanov drove the point home: “Like the central bank, we have decided to reduce investments of the NWF in dollar assets.” He went on to say the NWF will invest mainly in — what else? — the Chinese yuan, the euro and gold.

CNBC notes: “The changes to the NWF are expected to happen within the next month. Once complete, the share of euro assets in the fund is expected to stand at 40%, the yuan at 30% and gold at 20%. Meanwhile, the Japanese yen and British pound will likely make up 5% each.”

According to senior strategist Timothy Ash of BlueBay Asset Management: “The messaging is ‘We don’t need the U.S., we don’t need to transact in dollars and we are invulnerable to more U.S. sanctions.’”

“What alarms me is if Russia… operates outside of the dollar and other countries [follow] them,” says former Treasury official Michael Greenwald. “That would be alarming.”

It seems the mainstream media and even *ahem* a certain U.S. Treasury official are a day late and literally a dollar short when it comes to the de-dollarization narrative…

“I’ve written for years about persistent efforts to dethrone the U.S. dollar as the global reserve currency and the main medium of exchange,” counters our macro expert Jim Rickards.

“At the same time, I’ve said this isn’t something that happens overnight, but happens slowly…

“The dollar displaced sterling as the leading reserve currency in the 20th century but it took 30 years, from 1914–1944, to happen,” Jim chronicles. “The decline started with the outbreak of World War I and the U.K.’s liquidation of assets and money printing to finance the war. It ended with the Bretton Woods agreement that cemented the role of the dollar linked to gold as the new global standard.

“Even after the gold link was broken in 1971, the dollar standard remained intact because there was no good alternative,” he explains. “Still, the erosion of the dollar’s role has begun and is visible in many metrics.

“The dollar price of gold — an inverse measure of dollar strength — has gone from $250 per ounce to over $2,000 per ounce between August 1999 and August 2020. And the IMF’s special drawing right (SDR), Bitcoin and gold are waiting in the wings to step up as the dollar falters further.”

“The Russians are moving quickly to protect themselves from this inevitable decline,” says Jim. “Russia has already increased gold as a percentage of its reserves — only the U.S., Germany, Italy, France and the Netherlands have higher percentages of gold among the 20 largest developed economies.

“Now Russia will completely eliminate dollar holdings from its National Wealth Fund, which is a sovereign wealth fund that holds oil for the future benefit of the Russian people,” Jim notes.

“By itself, this move does not mean the end of the dollar as the leading reserve currency,” he says. “But it is one step closer on the slow path toward the dollar’s inevitable decline as a trusted medium of exchange.

“When the rush for the exits begins in earnest, you don’t want to be the last one out the door. It’s a good idea to diversify… if you haven’t already done so,” Jim concludes. “That way you’ll be keeping up with the Russians and be one step ahead of the dollar’s decline.”

[Note: The vacillating forces of economic warfare cause $6.6 trillion to change hands daily (yes, you read that figure correctly). But for everyday investors, this big-picture trend served up scant profit opportunities. Until now…

Jim Rickards and his team recently formulated a strategy he calls COBRA — a first-of-its-kind chance for retail investors to capture the upside as governments wage economic warfare all over the world.

Join Jim for a Special Profit Briefing set for Wednesday, June 16, at 1:00 p.m. EDT. As we mentioned yesterday, access is free and your spot is already reserved. All you need to do is follow this link to confirm it.]

“Check out the big ‘As’ — Apple and Amazon,” says our market analyst Greg Guenthner.

“Apple finally snapped to attention yesterday. The stock broke above our key $128 level and finished the day higher by about 2.5%,” Greg says. “Apple shares have been coiling for months and are still 10% below the all-time highs set back in January. I think AAPL is now clear to make a run at $135.

“Not to be outdone, AMZN has also quietly rallied over the past week. The stock has gained almost 6% over the last six trading sessions and is now knocking on the door to those highs set back in April,” says Greg. “This is definitely a stock to watch.”

We have a profusion of economic data to report…

Of course, a reading above zero signals expansion… and New York manufacturers are keeping the faith: The survey’s six-month outlook rose 11 points to 47.7

“Higher costs and declining availability for softwood lumber and other building materials pushed down builder sentiment in June,” says NAHB Chairman Chuck Fowke. “These higher costs have moved some new homes beyond the budget of prospective buyers, which has slowed the strong pace of home building.” The price of lumber tacked $36,000 to the price of a new home last month. No telling today…

The vacation gods seem to be against me, folks… if the tree gods don’t get me first!

I already mentioned my family’s scheduled a little R&R in Maine this weekend, but what I didn’t mention is that we had a near-miss last night with a neighbor’s tree… which came within eight feet of a direct hit on our suburban rancher.

The house and its occupants are intact — we’re counting our blessings — but the 100-foot-tall tree took out a power line, along with our home’s connection to it, around 11:30 p.m. A massive internet outage, too. (I’m writing today courtesy of my parents.)

Of course, we didn’t know how long it would take Baltimore Gas & Electric to get things up and running. My thoughts last night? “Good thing I bought that trip insurance… because I might spend my vacation cleaning out a fridge and freezer.”

But all’s well that ends well: Power has been restored! Internet? Not so much. Maine, however, might be a bust for an entirely different reason…

“The loss of student workers this year has ripple effects across [Maine], throwing a spotlight on employers’ heavy reliance on out-of-state labor to make summer work,” the Portland Press Herald reports.

“Closed embassies, international travel restrictions and a backlogged visa process mean only a fraction of the usual number of students will make it to the U.S., leaving seasonal employers scrambling even more to hire workers in a tight labor market.”

Take Funtown Splashtown USA, one of Maine’s biggest amusement parks (not on my family’s itinerary, but perhaps it should be), which opened three weeks late this spring because of an employee shortage… 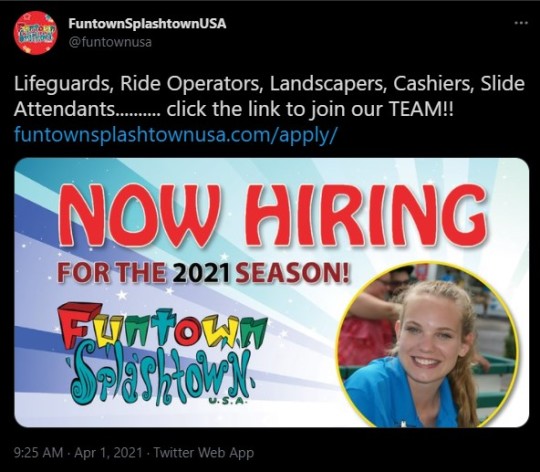 “Funtown is one of the biggest employers of foreign students in the U.S. on short-term ‘J1’ visas that permit about four months of work and travel,” the article says. “Two years ago, it employed about 110 visa workers. This year, [general manager Cory] Hutchinson expects about 45 students to make it.”

And those “ripple effects”? The amusement park has had to raise admission prices $2 and close the park two hours earlier each evening than the typical summer schedule.

“We are in a labor shortage – people think it is unemployment compensation and visa workers, but it is more than that,” says HospitalityMaine Government Affairs Director Greg Dugal. “It’s a disaster, plainly and simply a disaster.”

Things are really looking up for this vacation… heh. We’ll be back tomorrow…