It’s as if the powers that be aren’t even trying to keep up appearances anymore. They simply extend a big ol’ middle finger in the faces of us peasants… 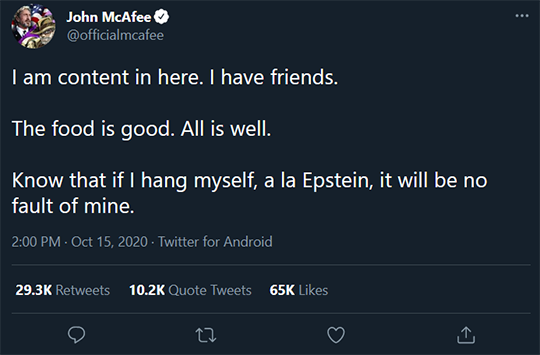 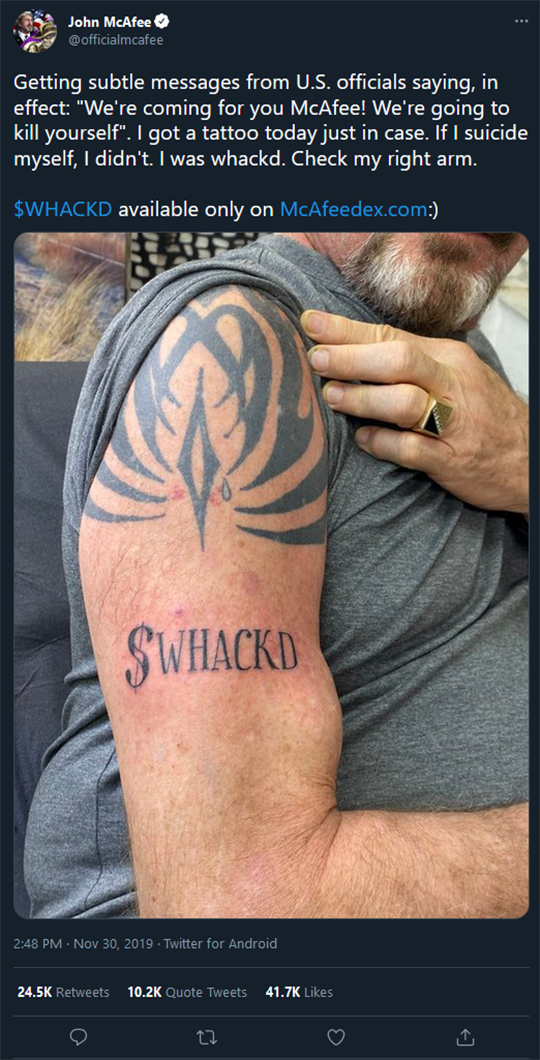 We won’t expend any digital ink rehashing what everyone else is reporting about the prison death of the software pioneer, cryptocurrency enthusiast and tax protester John McAfee; it would be a waste of our precious 5 Mins.

But seeing how McAfee brought up the case of the financier Jeffrey Epstein — this was last October, shortly after McAfee’s arrest in Spain on a U.S. warrant for tax evasion — it’s a good excuse for us to revisit the nature of “conspiracy theories.”

If you’re a longtime reader and some of the following material looks familiar, well, we invoke Samuel Johnson’s words about how “Men more frequently require to be reminded than informed.”

To set the table, dig the juxtaposition of headlines on The New York Times’ mobile app the day after Epstein’s death… 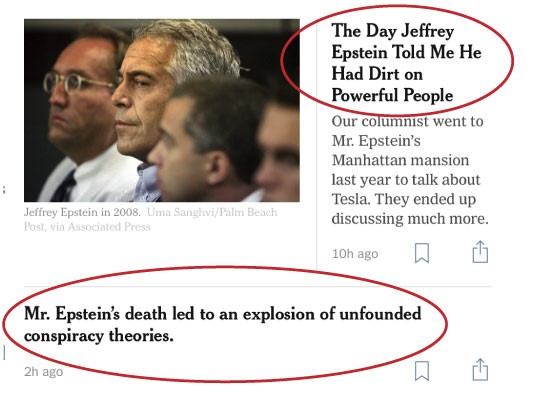 Here’s the thing that still frosts us about Epstein nearly two years later. You don’t have to believe he killed himself to marvel at the culture of impunity among the power elite.

Recall that Epstein was already a known suicide risk, and that he could potentially implicate other people in monstrous crimes.

Which means after Epstein’s initial suicide attempt, Attorney General William Barr had one job — one job — to make sure Jeffrey Epstein stayed alive.

Hours after Epstein’s death, we said Barr should resign in disgrace. But no — he stayed on, only to slink away weeks before the Trump administration was history. (Then again, we expected nothing more from the guy who covered up both Iran-Contra and Ruby Ridge during his previous stint as AG under Poppy Bush.)

“The term ‘conspiracy theory’ was invented by elite media and politicians to denigrate questions or critical presumptions about events about which important facts remain unrevealed,” wrote the veteran D.C. journalist Sam Smith.

“The intelligent response to such events is to remain agnostic, skeptical and curious. Theories may be suggested — just as they are every day about less complex and more open matters on news broadcasts and Op-Ed pages — but such theories should not stray too far from available evidence.

“Conversely, as long as serious anomalies remain, dismissing questions and doubts as a ‘conspiracy theory’ is a highly unintelligent response.”

From the web’s earliest days, Smith’s Progressive Review was one of the best internet news aggregators out there. Mr. Smith is a man of the left. But he also sniffed out Bill Clinton as a grifter from the get-go. That stance got him disinvited from polite company in Washington — when he wasn’t being labeled a “conspiracy theorist.”

“The unresolved major event is largely a modern phenomenon that coincides with the collapse of America’s constitutional government and the decline of its culture,” Smith continued.

“Beginning with the Kennedy assassination, the number of inadequately explained major events has been mounting steadily, and with them a steady decline in the trust between the people and their government.”

At that time, the U.S. government released a stack of documents seized during the raid on Osama bin Laden’s quarters in 2011 — plus a list of books and magazines he kept there. Among the titles was a shabby exposé of the Federal Reserve by a Holocaust denier. The implication, of course, was that any critique of the Fed is kookery.

The timing of the release was glaringly obvious to us — a shiny-object distraction from an article published a few days earlier by the legendary investigative reporter Seymour Hersh. It demolished the official version of bin Laden’s last years and ultimate demise.

He wasn’t hiding out in Abbottabad, Pakistan — he’d been imprisoned there since 2006, his upkeep paid for by Saudi Arabia. It wasn’t brilliant work by U.S. intelligence (with a little help from torture) that uncovered his whereabouts — it was a retired Pakistani intelligence officer motivated by a $25 million U.S. bounty. Nor was there a firefight when bin Laden met his maker — the Americans were the only ones shooting.

Hersh’s sterling reputation notwithstanding, the Establishment trashed him as a conspiracy theorist. “Hersh’s story reads like a fantasia of clandestine intrigue and deception,” said a typical smear piece.

We suggested at the time that Hersh would be vindicated in the end… but not until he’s dead. (Hersh is now 84.)

That’s how it went for Gary Webb, the reporter who blew the lid off the relationship between the CIA and the drug trade.

Webb documented how the agency turned a blind eye to drug dealing by the CIA-backed Contra rebels of Nicaragua during the 1980s. Large amounts of Contra cocaine wound up on the streets of Los Angeles.

Webb’s 1996 series in the San Jose Mercury News was ripped to shreds by more “respectable” newspapers like The Washington Post and Los Angeles Times. As with Hersh, the “conspiracy theory” trope was pulled out. Successfully, too: It wasn’t long before Webb’s editors threw him under the proverbial bus. He ended up killing himself in 2004.

Only with the release in 2014 of the thriller flick Kill the Messenger, based on Webb’s life story, did the mainstream acknowledge that while Webb might have flubbed a few minor details, he basically got the story right. Of the smear campaign, “It was a really kind of tawdry exercise,” recalled Jesse Katz — who wrote some of the LA Times’ most egregious hit pieces.

Perhaps there’s an unspoken two-decade moratorium on the truth being acknowledged. In addition to the Contra cocaine trade, two other “conspiracy theories” of the mid-1990s became conventional wisdom by the mid-2010s…

It is no longer “conspiracy theory” to say the feds missed obvious clues before the Oklahoma City bombing in 1995. Nor is it kooky to wonder whether people other than Timothy McVeigh and Terry Nichols were involved in the plot.

Both matters were tackled forthrightly in the 2012 book Oklahoma City: What the Investigation Missed — and Why It Still Matters. It won considerable mainstream praise.

But it didn’t break particularly new ground. Much of the territory the authors covered was trod by the newsletter Strategic Investment only months after the bombing. (That’s one of many reasons we say financial newsletters were the original “alternative media.”)

It is also no longer “conspiracy theory” to question the official story about the midair explosion of TWA Flight 800 off Long Island in 1996.

In 2015, a veteran pilot whose assignments included flying Barack Obama’s campaign plane in 2008 was given space in the New York Daily News. Wrote Andrew Danziger: “There’s hardly an airline pilot among the hundreds I know who buys the official explanation — that it was a fuel-tank explosion — offered by the National Transportation Safety Board…

“After the explosion, more than three dozen witnesses reported they’d seen contrails going up into the sky toward the plane; 18 of those people said they saw something coming up from the water, rising to meet the plane.

Danziger wouldn’t venture whether it was a terrorist attack or a U.S. military training exercise gone wrong. “But as an experienced commercial pilot,” he concluded, “I know this much: Planes do not blow up by themselves. I firmly believe that this plane was shot down.”

In a grim irony perhaps we’re the only ones to notice… McAfee’s death came the same day as the release of a survey of people in 46 countries revealing Americans trust their media the least.

Pollsters commissioned by the Reuters Institute surveyed 92,000 people across the globe. They asked folks whether they trust “most news most of the time” in their country.

Overall, 44% say they do. Finns are the most trustful of all, at 65%; Kenyans and Portuguese are close behind.

Among the 46 countries, the United States comes in dead last — only 29%. Little wonder, right?

Let’s get to the markets before our 5 Mins. are up. “Market momentum remains a powerful force,” says our floor-trading veteran Alan Knuckman.

“Money flow movement has left the leaders and is lifting the laggards, adding breadth to this week’s rally and bringing the S&P and Nasdaq to new all-time highs this week. Next up is the Dow… still down from the previous peak.” Alan is seeing attractive dips to be bought in many individual names.

At last check, the Nasdaq is adding onto yesterday’s record close — up nearly 1% past 14,400. The S&P 500 is solidly in record territory after a modest loss yesterday at 4,270. And the Dow has hefted itself past 34,000 again; there’s still work to be done before the Big Board reclaims its early-May highs.

The big economic number of the day is… deceptive.

Durable goods orders — that is, anything designed to last three years or more — jumped 2.3% in May, more than reversing April’s decline.

But that number is skewed badly by a 27.4% jump in aircraft orders — not surprising given the pace of reopening, the crowded airports and all, right? (Your editor is boarding a plane next week for the first time since November 2019. Wish me luck.)

If you strip out aircraft and military hardware — both categories notoriously volatile month to month — you get something the Commerce Department calls “core capital goods.” That figure slipped 0.1% last month, in contrast with expectations for a 0.5% jump. The blistering pace of recovery indeed appears to be slowing, just as Jim Rickards has been telling us.

Meanwhile, first-time unemployment claims rang in above 400,000 for a second-straight week. At this pace, the June job numbers — due for release a week from tomorrow — are shaping up to be still another disappointment.

A short item from the mailbag: “Funny, but I don’t remember a drastic reduction in consumer prices when corporate tax rates were cut!” is a reader’s riposte to our assertion that corporate tax increases will result in rising prices for everyday folks.

True enough. It would have been nice if corporate America had taken the largesse from the Trump tax cuts and plowed it into research and development, factories and equipment. Instead, it went mostly to dividends and buybacks.

But that’s not an argument in favor of higher corporate tax rates. It is an indictment of a financialized economy and central-bank money printing whose benefits have accrued mostly to the top 0.1%.