The Fundamentals of Gold

“It turns out that fool’s gold may not be so useless after all,” says an article at Live Science.

A study published this month at Geology finds “Pyrite crystals sometimes contain the occasional nanoparticle of real gold that gets caught up in the crystallization process,” the article says.

Put another way: “Gold can lurk in tiny defects in the pyrite’s crystal structure.” 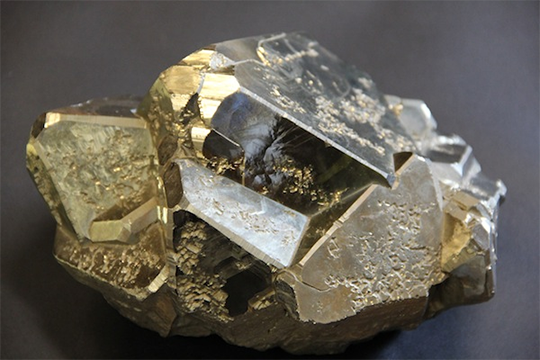 The real question: Can the trace amounts of gold be extracted? “Generally, gold is extracted using pressure oxidizing techniques (similar to cooking),” says study leader Denis Fougerouse at Curtin University in Australia, “but this process is energy hungry.

“We wanted to look into an eco-friendlier way of extraction,” he says.

“The researchers found they could remove the nanothreads of gold with a technique called selective leaching, in which a fluid dissolves the precious metal out of the sample,” Live Science says. “This worked well because the same tiny nooks that trap the gold also act as channels that help the dissolved gold travel out.

“Alas, the gold hidden inside the shiny yellow mineral isn’t enough to make you a millionaire, but it could be enough to extract by industrial mining in a relatively environmentally friendly way.”

Which leads us today to longtime gold enthusiast Jim Rickards, and his final gold-pricing model…

“The fundamental model,” says Jim, “is straightforward. It relies on supply and demand.

“The most significant development on the supply side is the flatlining of new mining output,” he says. “Mining output measured in metric tonnes for the most recent five years” — excluding 2020 — “reveals a mere 6% cumulative increase.

“Fundamentally, gold mining output has been flat for six years,” Jim says, “during a period when gold prices were rising and miners were motivated to expand output.

“This is not to argue that the world has reached ‘peak gold’ — output could expand in the future for a variety of reasons.” Fool’s gold, anyone? Heh…

“Still, my contacts in the mining community consistently report that gold is becoming more difficult to source, and the quality of newly discovered ore is low-to-medium at best.

“Central banks have been net buyers of gold since 2008 after decades of being net sellers,” he observes. “World official gold reserves increased from 29,964 metric tonnes in Q1 2009 to 35,244 metric tonnes in Q4 2020… a 17.6% increase in 12 years. And the trend toward central bank accumulation of gold bullion continues.”

Jim adds: “Much of the demand from hedge funds is in derivatives such as gold futures contracts and over-the-counter forwards and options,” he says. “Derivatives generally do not involve physical delivery of gold, but expanding open interest and buying pressure do support gold’s price.

“And after declining for most of 2021, ETFs showed net gold inflows of 21.8 metric tonnes for the week ending May 21, 2021,” says Jim. “Given recent gold prices, ETFs seem set to add gold holdings and to amplify momentum in gold prices.

“Overall, the picture is one of flat supply and increasing demand,” Jim concludes, “which tend to cause price increases — prices consistent with the monetary and technical models we already discussed.

“The lesson for investors is to buy gold now,” he says. “You’ll get more gold for your money at the outset and high percentage returns as gold rallies from a lower base.

“Toward the end of the long march to $15,000 per ounce, others will jump on the bandwagon, but you’ll already have a comfortable seat.”

Unlike many underhanded gold dealers, who mark gold up like crazy, you’ll only get transparent pricing and fees when you join the Hard Assets Alliance.

And once you’ve set up your account, which is free to do, you’ll see up-to-the-minute prices on precious metals.

Speaking of transparency, our firm has taken a stake in HAA, and you can assume we’ll take a cut of the profits. But we endorse what the company can do for everyday investors.

So join the Hard Assets Alliance today. Set up your free account and ride the gold bull market all the way up.]

Crude continues to break out: up another 1% to $73.72 for a barrel of West Texas Intermediate. No wonder gas prices are at a seven-year high… just in time for the Fourth of July weekend.

The only noteworthy economic number, the ADP employment report, shows 692,000 private-sector jobs were added in June versus the 600,000 economists estimated. The report’s predictive power for Friday’s BLS employment report, however, is generally considered nil…

“As Microsoft crosses this threshold, let’s take a moment to dissect the company’s financials,” he says. “And the foundation of any profitable company starts with its sales.

“As you can see from the chart, quarterly revenue for MSFT has steadily grown by adding new products and services and expanding its reach to cover customers around the world.

Zach says: “One of the things I like about MSFT is the company’s transition to a subscription-based model. The company now charges a quarterly or annual fee for many of its products like the popular Microsoft Office,

“This model ensures that customers will continue to pay period after period. And that means investors can count on those payments year in and year out — even during weak economic periods.”

Zach continues: “Once a company gets to where revenue growth is working, the question arises: What should the company do with the profits?

“Typically companies have two options,” he notes. “First, the company could choose to reinvest profits into new opportunities to grow the business. Big Tech companies like MSFT [might] invest in new technology, which can lead to better products for customers.

“A second option is to return some of those profits to shareholders through dividends or stock buybacks,” Zach says. “Since MSFT is now a more mature company, it’s now time for the company to reward its shareholders…

“Currently, MSFT is using two traditional strategies for returning cash to investors,” says Zach. “The first is through dividend payments, and MSFT has been consistently growing its dividends for the last 15 years.

“If you buy shares of MSFT today, you’ll be treated to a $0.56 quarterly dividend,” he says. “I expect this dividend to continue to increase.

“A second way that MSFT gives money back to shareholders is by buying back shares of stock,” says Zach. “When a company buys back its shares, it spends money to essentially retire its shares and take them off the market.

“This means if you held a position in MSFT over that period, you now own about 50% more of the company than you did 15 years ago.

“All told, this $2 trillion storybook stock has added a tremendous amount of wealth for investors who bought and held this stock over the last several years,” says Zach.

But… should you buy MSFT today?

“If I have one complaint about MSFT as an investment, I’d say the stock is a little bit expensive right now.

“If you buy shares today, you’ll be paying about 34.5 times next year’s expected earnings to own a piece of this iconic company,” Zach says. “This is at the high end of the range that investors have paid over the past couple of years…

“However, while you’re paying more for this company today, remember MSFT is growing quickly,” he says. “And MSFT looks like a perfect candidate to keep rewarding investors even if we’re paying a bit more to buy the stock at these levels.

“I’d suggest using a dollar-cost averaging strategy where you put a bit of money into MSFT today and then a bit more every few weeks,” Zach recommends. “That way, if the stock pulls back a bit, you’ll have some money waiting to buy shares at a discount.

“And if shares of MSFT continue to surge higher,” he concludes, “you’ll already have some of your capital invested and profiting from the move.”

Oopsy-daisy! One of the world’s largest banks just made a critical staffing error… Starting in July, Deutsche Bank AG will be suspended from sponsoring IPOs in Hong Kong after the bank neglected to replace two key staff members.

For some context, in Hong Kong, a bank IPO sponsor is required to employ two principals, according to the region’s regulator, the Securities and Futures Commission (SFC).

“One of them must have at least five years of corporate finance experience in Hong Kong,” Bloomberg says, plus prior experience sponsoring IPOs in the Chinese special administrative region.

But talk about bad timing: DB’s in the process of cutting 18,000 jobs worldwide, and practically “shed almost all its equity capital markets teams in Hong Kong,” the Financial Times says.

While it’s unclear whether the two IPO principals were among the pink-slipped, what is clear is one left her post on June 16 and the other principal leaves the German bank’s employ in early July.

“Deutsche called the IPO license issue a ‘timing mismatch’ and said it had already recruited replacements, although the bank declined to specify when they would start,” FT says.

But an unnamed Deutsche Bank exec was less politic: “He said it would be ‘crazy’ for a global bank with a large legal and compliance division to let its IPO license expire and not have a plan in place to replace the two authorized individuals.”

Heh, we always get a little charge when banksters miscalculate… and are found out.

Have an outstanding day! And we’ll be back tomorrow.

P.S. We just learned Jim Rickards is removing this video from circulation tonight.

In it, he reveals his latest findings on global financial markets…

And an uprising he calls the “Sixth Domain of War.”
Thousands have already viewed Jim’s singular presentation, straight from his personal war room.

We think you’ll benefit from watching too… But it’ll be scrubbed from the internet tonight.