A “No Compromise” Electric Car

“Even though Americans are warming up to the idea of EVs, only around 2% of vehicles sold in 2019 were electric,” says our technology expert Ray Blanco.

“There are still major gripes about EVs’ practical use,” he continues. “Answer this: What’s the biggest thing holding you back from getting an electric vehicle?

“My guess is you don’t like the uncertainty of getting stranded on the road without a charge… And you’re not alone.

“For instance, the best Tesla batteries right now have a range of just over 400 miles,” says Ray. “And they can take up to 40 minutes to charge on even the fastest road chargers. 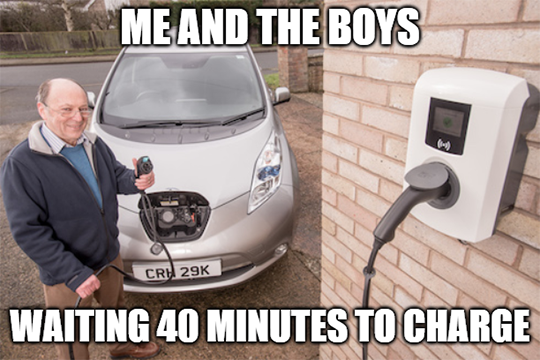 EV owners wanted: Must have the patience of Job…

“That’s fine if you only commute back and forth from work every day. But what if you want to visit family in a different state or take a weekend vacation somewhere?

“Something has to change if EVs want to outsell their gas-guzzling brethren,” Ray says.

“Lithium-ion batteries power most modern electric vehicles,” Ray notes. “The issue is they have a lot of problems. Not just range and charge times but safety, lifespan and especially cost.

“And until these issues are worked out, EVs will never become mainstream.

“Fortunately, a new battery tech will soon change the industry forever,” he says. “Solid-state batteries are the next step in battery evolution.

“Solid-state batteries help resolve some EV issues and have a lot of advantages:

“For the consumer, these advantages put together make electric vehicles a no-brainer,” Ray says. “You cut down on emissions and pocket your gas money.

“Best of all” — with a solid-state battery powering an EV — “you don’t have to sacrifice any of the perks of driving a ‘normal’ vehicle,” Ray says.

“We’ve already seen huge investments from automakers in this field,” he says. “BMW invested $20 million in Solid Power Inc. to scale the production of solid-state batteries, launching vehicles by 2025.

“Hyundai recently invested in Ionic Materials, a U.S.-based startup expecting to have a commercial vehicle on the road by 2025.

“And Toyota and Panasonic formed a joint venture to produce next-generation solid-state batteries for electric vehicles by 2030.”

Ray’s take: “The current EV lithium-ion batteries are going to be outpaced” — and replaced? — “by solid-state batteries. And you’d be wise to keep an eye on companies taking the next step.”

[Note: One of Tesla’s senior battery engineers handed in his resignation letter… and started his own battery company. Plus, he brought the leader of Tesla’s entire battery division with him.

Get the details about this technology upgrade… while this startup is still a tiny company. And before it’s bought by Tesla, the $600 billion EV titan… or one of its competitors.]

More noteworthy market news: “Beijing is stepping up its oversight on the flood of Chinese listings in the U.S., which are overwhelmingly tech companies,” CNBC says.

“China’s most powerful companies — including Didi, Alibaba and Tencent — are suddenly under immense scrutiny as [Beijing] vows to crack down on domestic companies that list on U.S. exchanges.

“That move could upend a $2 trillion market loved by some of the biggest American investors,” CNBC says.

All of which is particularly bad news for ride-sharing app Didi — a recent IPO — with shares tumbling 20% Tuesday after China’s State Council said it would be reevaluating “the overseas listing system for domestic enterprises.”

Another indicator of China’s regulatory pressure: “The Invesco Golden Dragon China ETF (PGJ), which tracks U.S.-listed Chinese shares consisting of ADRs of companies… headquartered and incorporated in mainland China, has lost a third of its value from its February peak.”

The Bank of Thailand disclosed it purchased 90 tonnes of gold throughout April and May — the biggest central bank gold purchase of 2021.

“That’s a non-trivial purchase for a small economy,” says our macro expert Jim Rickards. “To put that in perspective, it’s 0.25% of all the official gold in the world.”

Jim continues: “Other large central bank purchasers in recent years include Mexico, Iran, Turkey and Kazakhstan.” On the list this year? Hungary and Poland.

Which is quite the reversal…

“Central banks as a whole were net sellers from 1970 to 2010,” says Jim. “In 2010, they turned on a dime and became net buyers. Global official reserves have increased on net by over 2,000 metric tonnes in the past several years.

[To reinforce Jim’s assertion, Poland’s central bank was transparent about its own gold-buying motivations, saying in 2019: “Gold is the ‘most reserve’ reserve asset: It diversifies geopolitical risk and is a kind of confidence anchor, especially in times of tensions and crises” while it “increas[es] the country’s strategic financial security buffer.”

Furthermore, Jim says: “The reason central banks are buying now is obvious: They know the U.S. has to inflate its way out of its debt binge and gold is the best hedge against dollar inflation.

And while we’re on the subject…

On July 1, Ohio became the 41st state to end sales tax on precious metals — gold, silver, platinum and palladium — bullion and coins. And the moratorium on Ohio’s precious metals sales tax goes into effect on Oct. 1, 2021.

“These efforts are common sense,” says state Rep. Kris Jordan (R). “We should not be taxing money” (emphasis ours).

“This form of double taxation discourages Ohioans from buying precious metals in the state and drives their business elsewhere,” he says. “Ohio precious metal dealers [can now] better compete with our neighboring states as well as on the online marketplace.”

We see you, Vermont, Kentucky, New Mexico and D.C.…

More on state sales taxes: “New Jersey is in the process of removing medical marijuana from its sales tax base,” the Tax Foundation says. New Jersey!

According to an article at the New Jersey Herald: “The sales tax phase-out was a key part of last year’s Jake Honig Compassionate Use Medical Cannabis Act, which also legalized medical marijuana edibles, raised the monthly allowance to three ounces per patient and required them to recertify just once a year.”

“That doesn’t mean medical weed will be completely tax-free: Municipalities are still permitted to levy a 2% ‘transfer tax’ on purchases within their borders, though no town has instituted such a tax yet,” the article concludes.

A U.K. study finds “the number of complaints about poor service in the last six months [is] at its highest level since 2009,” the BBC says. With the typical excuse for a negative customer experience being… it’s “because of COVID.”

The U.K. Institute of Customer Service surveyed 10,000 participants. “A quarter of those… said that some organizations had used COVID as an excuse for poor service.” While that excuse might have held water in 2020 — even in early 2021? — consumers’ patience is wearing thin.

The BBC notes: “The sectors with the biggest issues were transport, local public services… police services and telecommunications.”

One example? After his home was fitted with a “smart” energy meter during the COVID lockdown, a 50-year-old Gloucestershire resident says the meter showed he was using £45,000 worth of gas per hour. With no bill for four months.

When he attempted to contact his energy provider… crickets. “There has been no resolution,” he says. “I would like to know what I owe.”

At least the energy company didn’t blame it on COVID? But silence isn’t always golden…

Have you been a recipient of “the COVID excuse”? Let us know…