… with a stern reality check.

As usual, the banks start earnings season this week.

Yes, JPMorgan Chase and Goldman Sachs delivered results this morning that were “better than expected.” We have every reason to believe Bank of America, Citi and Wells Fargo will do the same tomorrow. And Morgan Stanley on Thursday.

It’s all good for the banks right now. As we mentioned last month, the two dozen biggest all passed the Federal Reserve’s latest “stress test” with flying colors.

This is an annual exercise the Fed started after the Panic of 2008, basically war-gaming an extreme economic or market event: Would the banks have enough capital on hand, or would they need another taxpayer bailout?

The 2021 results were so good, the Fed nixed its limits on the banks’ dividend payouts and share buybacks.

“There is no stress in a test that every bank passes comfortably, particularly when that result is predictable because the test-giver’s (the Fed’s) massive intervention in the markets ensures the test-takers (the banks) have everything they need to ace the test.”

That’s been the essence of our complaint about every permutation of the stress tests since they began in 2009; it’s always heartening to see we’re not alone.

But Kelleher says it’s even worse than we realize, in light of changes made starting in 2018: “The stress test program has been seriously weakened under the Powell chairmanship by, among other things, the removal of two key components: the inclusion of dividend payouts and a growing balance sheet. If those factors were included, as they should have been, the banks would have had materially lower post-stress capital ratios.”

As Kelleher sums up, “Of course, the largest banks have ample levels of capital to weather the economic downturns reflected in the Fed’s scenarios – that is the Fed’s policy objective.”

Result: The too-big-to-fail banks are paying out more in dividends and share buybacks than they report in net income.

“In fact, they’ve been doing it for years under the unwatchful eye of their captured regulator, the Fed,” write Pam Martens and Russ Martens at Wall Street on Parade. In 2017, for instance, Bloomberg reported the four biggest banks paid out $1.26 to shareholders for every $1 in net income.

Now this trend is set to go on steroids: The removal of the Fed caps “will result in a flood of dividends and share buybacks likely to approach $200 billion,” says Mr. Kelleher.

In the case of Wells Fargo, that might well translate into shareholder payouts equaling 167% of the bank’s earnings, according to estimates from Evercore ISI cited by the Reuters newswire.

“What’s happening between the Wall Street mega banks today and the Fed is a replay of the dynamics that led to the 2008 crisis,” warn the Martenses.

“The question is, will the Biden administration take action in time to thwart another economic crash that America can ill afford?”

The question answers itself — even before we look up the figures we cited on the eve of the 2020 election: Contributions to the Biden campaign from the securities and investment industry totaled roughly $74 million. The Trump campaign garnered $18 million.

No, we’re not saying a replay of 2008 is just around the corner. But now would be a good time to take some precautionary measures in your portfolio… so you’ll be ready whenever that day arrives. We’ll start offering some guidance along those lines later this week.

It’s the Nasdaq’s turn to be the engine pulling the stock market forward today.

As it happens, the aforementioned JPMorgan Chase and Goldman Sachs are both losing ground today — a classic “buy the rumor, sell the news” reaction.

At least for the moment, inflation is still heating up.

That’s the clear takeaway from the June Consumer Price Index, out this morning. It soared 0.9% from May — which translates to an official year-over-year inflation rate of 5.4%. No one among dozens of economists polled by Econoday saw that coming.

The last time the figure was this high was August 2008 — the month before everything went to hell and the Panic of ‘08 was in full swing. (Maybe we’re being too complacent today about a replay of 2008? Hmmm…)

Even if you strip out food and energy, the “core” inflation rate is 4.5% — also way higher than expected, indeed a level last seen coming out of the 1990–91 recession.

Meanwhile, the real-world inflation rate from Shadow Government Statistics — using the same methodology the feds used during the Carter administration — is now 13.4%. Like the official rate, it’s the highest since the summer of 2008.

The way things are going, The 5 could start doing daily updates on supply-chain snags — stories that get buried deep on the websites of traditional financial media. So as a public service, we pass along the following two items…

First, a “perfect storm” is shaping up with COVID outbreaks aboard commercial ships, according to Esben Poulsson of the International Chamber of Shipping trade group. “With this new delta strain, there’s no doubt it’s setting us back and the situation is getting worse,” he tells Bloomberg.

At any given time, about 1.6 million people are at work aboard international shipping crews. But at this point, Poulsson’s group estimates 40,000 at most have been vaccinated. “The shipping industry is sounding the alarm as infections increase and some ports continue to restrict access to seafarers from developing countries that supply the majority of maritime workers but can’t vaccinate them,” Bloomberg reports.

Meanwhile, rising shipping rates are putting a hurt on small and midsize businesses.

“With retail giants like Walmart Inc. and Amazon.com Inc. rushing to restock to meet booming demand from U.S. consumers, smaller competitors are battling over dwindling cargo space on boxships coming in from Asia,” says The Wall Street Journal.

Per the Freightos Baltic Index, the typical price of shipping a container from China to California is now 344% higher than it was pre-pandemic in early 2020. Walmart and Amazon can eat those costs a lot more easily than the small fry.

On the surface, small-business owners are their most optimistic since last fall. But beneath the surface? Eek.

The National Federation of Independent Business is out with its monthly Optimism Index. The number leaped more than expected in June, from 99.6 to 102.5. That’s a strong number, especially compared with the years-long slog coming out of 2008… 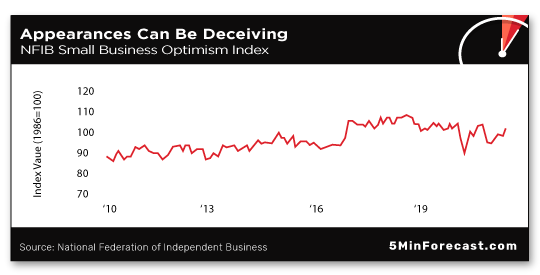 But ugh, the “internals” of the survey. “Small businesses optimism is rising as the economy opens up, yet a record number of employers continue to report that there are few or no qualified applicants for open positions,” says NFIB Chief Economist Bill Dunkelberg. “Owners are also having a hard time keeping their inventory stocks up with strong sales and supply chain problems.”

Yep. Asked to identify the “single most important problem” they face, fully 26% now say it’s finding qualified help. Taxes are in second place at 18%… and inflation has vaulted its way into third place at 13%, pushing regulation into fourth place at 11%.

We’re not sure if it’s entirely attributable to inflation, but… 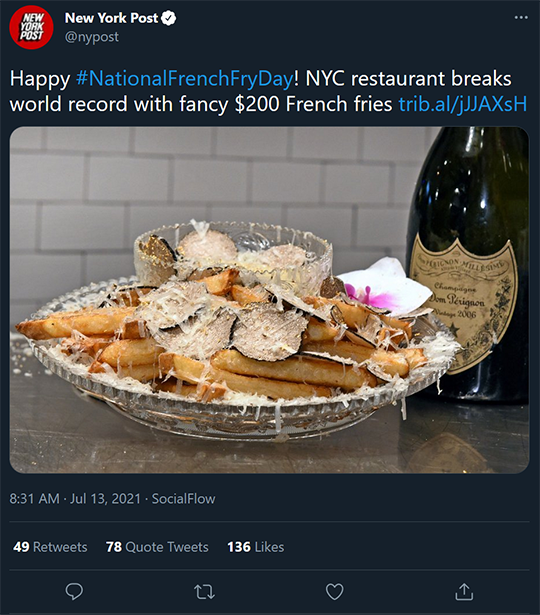 It is indeed “National French Fry Day” and a New York restaurant has indeed set a record for the most expensive order of fries.

The Guinness folks awarded the record to Serendipity3 on Manhattan’s Upper East Side. Yours for $200, here’s a description courtesy of the UPI newswire…

The restaurant reopened only four days ago, having survived 16 months of lockdown — which is more than you can say for a lot of Big Apple eateries.

Then again, Serendipity3 has a flair for publicity; the New York Post says this is its 10th Guinness record.

“Minor comment on the road tax issue,” a reader writes: The feds don’t do roads, or a lot of other things either.

“But they do send money to the states to maintain the roads (and many other federal ‘priorities.’) The states then prioritize projects and spend the federal highway funds as they like. The states can add funds for roads and such, which may or may not be fully funded by fuel and registration fees.

“So the feds tax us and ‘graciously’ give us some of our money back, and the states extract fees that go to the general fund and might make it back to fix that tired highway we all drive on. Love The 5!”

The 5: And don’t forget those federal dollars come with strings attached. People forget, but that’s how we ended up with a national drinking age of 21.

Congress never passed a law mandating age 21 coast to coast. But it did pass a law in 1984 slashing the federal highway funds of any state that didn’t pass a state law to that effect.

Reminder: The federal legislation was signed into law by Ronald Reagan. Yet another example of conservatives being “fair-weather federalists.”