“This feels a lot like 1999 to me,” says Hussein Kanji of U.K. venture capital firm Hoxton Ventures at CNBC. “You had so much supply, so much enthusiasm.”

But 22 years hence, how’s this for supply and enthusiasm: “The number of so-called ‘mega rounds’ — massive, $100 million-plus venture deals — has climbed to 751 in 2021 year to date, already beating the 665 mega rounds that were raised last year.”

So far in 2021? There’s been more than $292 billion venture capital raised so far this year… 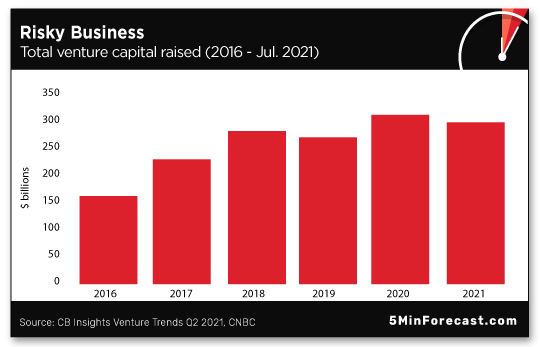 Add to that, there have been a record-setting 249 “unicorn” firms valued at $1 billion (or more) in the first six months of 2021, according to CB Insights, nearly double the number during 2020.

CNBC notes: “Skyrocketing valuations of private tech firms are causing concern for some investors.” As if the 1999 reference wasn’t clear enough, the financial media outlet conjures a Sequoia Capital memo circa the Panic of 2008 titled: “R.I.P. Good Times.”

So if CNBC is getting hot under the collar, then acclaimed The Big Short investor Michael Burry has been apoplectic.

In particular, Dr. Burry cautioned the frenetic buying of meme stocks reminds him of the dot-com era plus the real estate boom of the mid-aughts.

“The Scion Asset Management chief noted the people who went all-in on technology stocks at the turn of century, and those who took out massive loans to buy multiple homes in the mid-2000s, didn’t expect the good times to end,” says an article at Business Insider.

“Meme-stock investors are falling into the same trap and risk getting burned,” Burry warns now BI tells us.

“We probably do not have to wait too long,” he continues, “as I believe the retail crowd is fully invested in this theme, and Wall Street has jumped on the coattails.” Business Insider notes: “Wall Street professionals are now tracking social-media chatter and cashing in on the latest meme stocks.”

So the “Reddit Revolution” — which started with mostly millennial investors with time and a modicum of money to burn — has been mimicked by the Wall Street set.

With a major caveat: “They are in a better position than retail to participate, sniff out and start gamma squeezes in the options market,” Burry says.

Not that Wall Street, even with its bottomless-seeming pockets, won’t be scorched by overheated markets.

“Frankly, I see that as detrimental to long-term sustainability… because businesses are not focused on generating value, they’re focused on burning and deploying cash.”

Of course, if Wall Street feels the heat, it’s all but certain retail investors will be the ones burned.

[Ed. note: Legendary hedge fund manager Ray Dalio agrees with Michael Burry, saying: “We are in a worse position than 2008.”

And everyone you talk to seems to agree: Things are weird. So much so, the financial media aren’t even bothering with the go-go pandemic “recovery” narrative anymore. Plus, let’s face it, the Federal Reserve is out of options to prop up the economy.

We are teetering on the edge… and it’s scary as hell.

However, there is a simple solution; it could be your last chance to protect your portfolio before a catastrophic market pullback.

The key is to act BEFORE the bubble pops… That’s why one of the best traders in America wants to show you one simple trade — a trade you can place in any regular brokerage account… a trade that could protect your entire portfolio if the markets fall off a cliff.

Watch your inbox tomorrow at 10:00 a.m. EDT for a link to learn more about this strategy, completely FREE.]

“Summer trading keeps us chopping along and wondering if we’re ever going to see any meaningful follow-through,” says our analyst Greg Guenthner.

“Under the surface, things aren’t looking great. Almost 80% of all stocks on the market finished in the red on Tuesday,” he says. “Here’s what’s working against the market:

As for commodities, oil is down 2% to $73.70 for a barrel of West Texas Intermediate; it appears the United Arab Emirates have come to terms with the rest of OPEC about production increases.

“Lumber, which at one point was among the world’s best-performing commodities… has officially wiped out all of its staggering gains for the year,” says an article at Bloomberg.

“At one point, lumber futures were trading as high as $1,733.50 per thousand board feet, more than quadruple the level of a year earlier.”

The price of lumber was one of the most spectacular examples of rising commodity prices early in 2021, something which threatened to undercut the “recovery” narrative.

But after lumber prices descended from peaks in May, even Fed chair Jerome Powell “cited lumber’s decline as evidence that price pressures will cool as supply bottlenecks from the reopening economy are worked out and stimulus fades,” the article says. 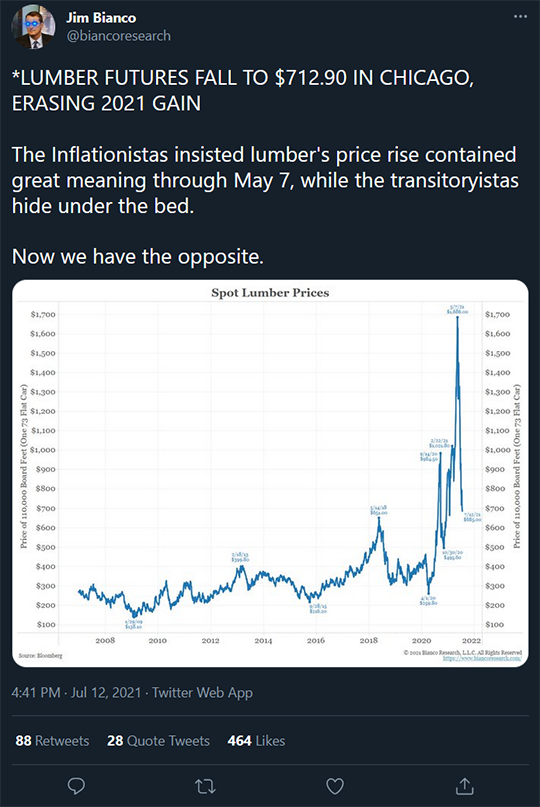 When it comes to the price of lumber, expect a “paradigm shift… determining a new and much higher average price level as a result,” Kuta concludes.

“Hotel room prices were 44% higher this June than last June,” she says. “Airfares were 24% higher in May 2021 compared to last May, according to the Consumer Price Index.

“But some of what appears to be major price inflation is really about comparisons to super-cheap prices at the height of the pandemic in 2020,” Nomi continues. “That’s something called the base effect.

“Still… key business travel destinations, such as New York, Chicago and Washington, are still showing prices far below 2019 levels because business travel has been slower to rebound than leisure travel,” she says. “In New York City, which is usually more of a business mecca, hotel prices were sitting at about 25% below where they were in the same week of 2019,” Nomi says.

Contrast that with holiday destinations Orlando and Miami, where hotel rooms were up 6% and 48% respectively the week before the Fourth of July.

Then there’s Vegas: “There are about 150,000 hotel rooms in Vegas,” says Nomi. “As the pandemic restrictions rolled out, many hotels in Vegas had to shut down completely. Some stayed open, but at 25% occupancy.

“During the July Fourth weekend, though, hundreds of thousands of visitors descended upon Las Vegas on the busiest holiday weekend since before the pandemic.

“This is just one example of life starting to return to normal as the pandemic wanes,” she says. “As the economy opens up and restrictions are lifted, many Americans are looking forward to life as we knew it in 2019.”

The Cannabis Administration and Opportunity Act — as it’s initially titled — is “being released to spark conversation to inform what will be a formal introduction of the bill at a later date,” says an article at Marijuana Moment.

“Beyond ending [federal] prohibition, Schumer said the proposal he and his colleagues are working on will ‘ensure restorative justice, public health and implement responsible taxes and regulations,’ similar to what New York lawmakers sought to accomplish in a legalization bill that the governor signed into law this year.”

And this is interesting: “Schumer made a point in March to say that [legislation] will specifically seek to restrict the ability of large alcohol and tobacco companies to overtake the industry. Instead, it will prioritize small businesses, particularly those owned by people from communities most impacted by prohibition.”

The 2017 case of the purloined 220-pound gold Canadian Big Maple Leaf from Berlin’s Bode Museum has come to a conclusion.

“A German federal court on Tuesday rejected the appeal of two defendants who had been jailed for stealing a massive gold coin,” says a Deutsche Welle article.

Once the second-largest coin, now lost to history…

“Two of the defendants were from an organized crime clan and were known to law enforcement before the theft,” DW says. “The other man worked at the Bode Museum as a security guard and was found to have helped the other two gain entry to the facility.”

And while the mammoth coin is most likely no longer intact, German law enforcement is still attempting to recover coins that might have been struck using its gold.

Not only that, “the German government announced in May that it had created a program to improve security at select museums.”

P.S. If Michael Burry — the guy who made $725 million off the Panic of 2008 — is worried that the markets are setting up for a replay of 2008 and 2000 combined… doesn’t it make sense to take some protective measures?

Tomorrow, Dave will introduce you to one of the nation’s leading traders… who will show you how to do exactly that.

You don’t have to go all-in on gold or retreat into cash. In fact, this trading expert says that’s the absolute wrong thing to do.

The right thing is super-simple. And it will buy you something priceless — peace of mind.

Again, watch your inbox tomorrow at 10:00 a.m. EDT. Then open our email and see for yourself. It might be the smartest thing you do all year.