“The last 12 months have been a classic finale to an 11-year bull market,” the investing legend Jeremy Grantham tells Bloomberg.

We’ve been keeping tabs on Grantham’s periodic media appearances all year, seeing as he’s one of the few people who’s accurately “called the top” of one bull market after another.

He bailed from Japanese stocks just as they were crashing in 1990. He anticipated the dot-com meltdown in 2000. He was among the lonesome voices — along with our own firm — who said the mid-2000s housing bubble would end in tears.

Here in 2021, he’s been ruthlessly consistent. Asked by Bloomberg in January whether now is the time to “sell everything,” he replied, “I suspect selling everything would work out just fine.”

In February he said on a podcast, “We’ll be rather lucky to have this bubble last until May.”

May came and went, but all along he cautioned that he’s not trying to time his call to the nanosecond and that bubbles can last longer than anyone expects.

In other words, nothing has changed from six months ago: “Checking all the necessary boxes of a speculative peak, the U.S. market was entitled historically to start unravelling anytime after January this year,” he says in his most recent Bloomberg interview.

If anything, the dynamics are even more alarming now — with stocks, bonds and real estate all rallying in tandem, and commodities along for the ride.

“That trifecta-and-a-half has never happened before anywhere – the closest before was Japan in 1989,” says Grantham. “The consequences for the economy were dire and neither land nor stocks have yet returned to their 1989 peaks!”

Word. In 1989 the Japanese juggernaut was supposedly going to take over the world; Japanese buyers had even snapped up that most American of icons, Rockefeller Center in New York. Now Japan’s been in an economic funk for three decades, with no end in sight.

So what’s he doing to prepare?

Here too, Grantham is sticking to his guns as he has all year: value stocks instead of growth stocks, emerging markets instead of developed markets. That’s easy for retail investors to mimic with ETFs like VTV and EEM.

But other elements of his strategy are harder for everyday folks to pull off. Venture capital? Forget it. And his fondness for cash? Also a non-starter.

As we pointed out earlier in the year, only the extremely wealthy like Grantham can afford to hide out in cash. They’re not trying to build a nest egg for retirement, or live off an income stream post-retirement. You are — and 1% on a 5-year CD (for instance) won’t cut it.

We suspect, although we can’t prove, that Grantham is doing something else with his money that he’s not disclosing.

It’s the sort of trade that’s paid off insane amounts of money for the very wealthy in years gone by. We mentioned one example yesterday — the $725 million made by Michael Burry of The Big Short fame, playing the 2008 crash.

Don’t get us wrong; it’s totally legal and above-board. If Grantham is making this sort of move and doesn’t want to talk about it, that’s his prerogative.

Our point is this: You can do something very similar.

And you don’t even have to “sell everything” to make it work. With as little as maybe 1% of your holdings — we’re talking $500 of a $50,000 portfolio — you can take out a “disaster insurance” policy that could make you up to 40 times your money in a worst-case scenario.

Just one simple move that buys you peace of mind.

Want to learn more? Follow this link and I’ll show you what it’s all about, with the help of one of the best traders in America.

As we turn to the day’s economic numbers, another statement of Grantham’s is nagging at us: “It won’t take bad news to bring this down,” he told an Australian newspaper six weeks ago. “It will take a slightly less optimistic outlook than we had last week.”

Begin in China… where second-quarter GDP grew 7.9% year over year. That’s less than the 8.1% expected. It’s also less than half the previous quarter’s pace.

True, year-over-year comparisons are tricky. China was already recovering from the pandemic in the second quarter of 2020 — Wuhan came out of lockdown on April 8.

But even if you take the number at face value — which Chinese leaders do not, we learned that long ago from WikiLeaks — it’s a disappointment.

Thus a statement from China’s National Bureau of Statistics doesn’t even try to spin the number: “The epidemic continues to mutate globally and external instabilities and uncertainties abound.”

Meanwhile, here at home… the semiconductor shortage is taking a meaningful bite out of American industry’s recovery. That’s the takeaway from the Federal Reserve’s June industrial production figures.

Vehicle production — hit hardest by the shortage — tumbled 6.6%. That dragged down the overall number for manufacturing. It fell 0.1% in contrast with economists’ expectations for a 0.3% jump. Factory output has now fallen in three of the last five months.

Total industrial production — which combines manufacturing, utilities, mining and energy production — did rise 0.4%. But that’s less than the expected 0.7%, and it’s being goosed by the wrong things — intense demand for air conditioning, and rising prices for commodities and energy.

“Less optimistic” economic news notwithstanding, the markets are holding their own — at least right now.

After record closes on Tuesday and a pullback yesterday, the major U.S. stock indexes are treading water today — the Dow unchanged, the S&P 500 down a quarter-percent and the Nasdaq down a half-percent.

Precious metals are consolidating after a nice run-up yesterday, gold at $1,823 and silver at $el.

That tidbit emerges in a report from the Federal Reserve, spotted by Pam Martens and Russ Martens at Wall Street on Parade.

We’re talking JPMorgan Chase, Bank of America, Wells Fargo and Citi with $9 trillion in assets. The other 4,974 institutions hold $13.56 trillion.

The Martenses decry something we’ve lamented ourselves over the years — the incredible consolidation in the banking industry. When the Depression-era Glass-Steagall Act was repealed in 1999, the number of banks totaled 10,220. The number has shrunk by half in two decades.

“One business day later,” write the Martenses, “the Federal Reserve… wait for it… approved another bank merger.” The Fed hasn’t rejected a single merger application since at least 2006.

A few years ago, the Visual Capitalist website illustrated how the Big Four got so big. Note especially the shotgun marriages that came out of the 2008 crisis… 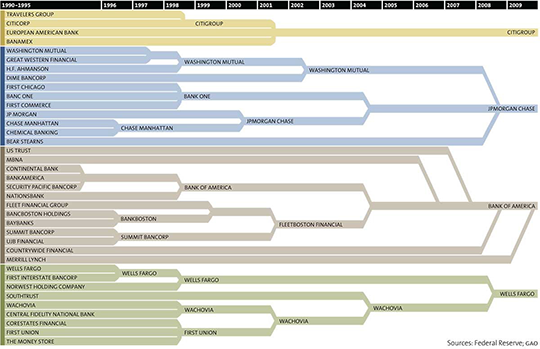 And as we noted here on Tuesday, the big banks are now returning more money to shareholders (dividends and buybacks) than they’re booking in net income.

“What’s happening between the Wall Street mega banks today and the Fed is a replay of the dynamics that led to the 2008 crisis,” said the Martenses.

More supply-chain squeezes: The nationwide shortage of truckers we’ve mentioned now and then is starting to make life challenging for produce farmers.

The U.S. Department of Agriculture is out with its monthly “Fruit and Vegetable Truck Rate Report” — granular data describing the availability of refrigerated trucks in 23 regions of the country that generate much of our produce.

At this time, availability is rated “adequate” in only five regions — two Mexican border crossings, as well as Louisiana, Mississippi and eastern Washington.

Meanwhile, anecdotal evidence is emerging that “this year’s wheat harvest is shaping up as dreadful,” declares Kansas-based agronomist Bart Hall, writing at the Instapundit site.

[In other news, Instapundit is still a thing. But we digress…]

“Durum, used for pasta and bread flour, looks to be the worst in at least 60 years,” writes Hall. “Soft White Winter wheat, used for pastry flour, and Hard Red Winter (all-purpose) are facing the worst harvests since the 1988 drought.”

Your editor remembers that 1988 drought. It was brutal for the farmers — nightly fodder for the local TV newscasts I produced that summer, first in Illinois, then in Kansas.

And it’s not just a wheat thing or a U.S. thing. “Canola oil is also likely to see a price jump,” Hall writes, “as the crops across Alberta and Saskatchewan have also been clobbered.”

Enough doom for one day. Check out this Intriguing job listing… 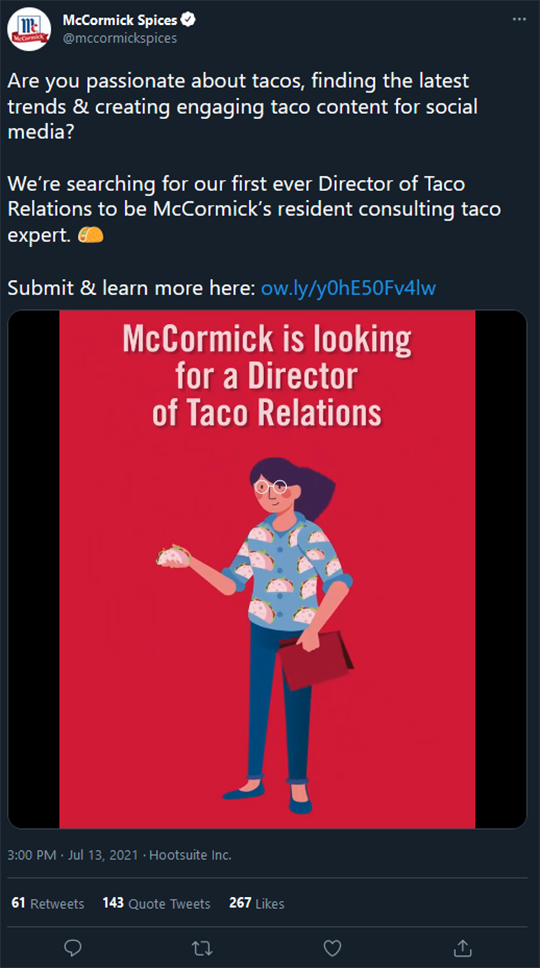 In our Baltimore-based firm’s backyard, the spice maker McCormick is advertising for a “director of taco relations.”

From an article at the website of Washington, D.C.’s all-news radio station WTOP: “Per the job description, responsibilities including keeping tabs on taco trends, trolling TikTok, and taking part in virtual calls to learn about taco offerings from taco chefs across the country and sharing those findings with the McCormick team.

“The director of taco relations will also be responsible for developing content, including videos of McCormick’s social media pages, and must be able to travel to the McCormick headquarters and other taco locations across the country about 10% of the time.”

Just a word to the wise: HQ is in the northern Baltimore suburb of Hunt Valley. It’s nowhere near the airport. And you’ll take your life into your hands getting to and fro on I-695. Heh…

P.S. “3 Things That Could Cause the Stock Market to Crash in the Second Half,” says a recent Barron’s headline.

We read the article so you don’t have to. All three seem credible to us. They are…

We’ll add a fourth to the list — the debt-ceiling drama in Washington, with a drop-dead date of July 31. We’ll devote a good-sized chunk of our 5 Mins. to that possibility tomorrow, but in the meantime, you owe it to yourself to check out the “disaster insurance” briefing I just held with one of the best traders in America. You can start watching right away when you click here.