The U.S. government is retreating on one front of global economic warfare… and advancing on another.

On the retreat side of the ledger, the Biden administration is formally giving up a years-long attempt to halt the Nord Stream 2 pipeline project carrying Russian natural gas under the Baltic Sea to Germany.

Biden, Trump, Obama — they all tried to stymie it, relying on several rationalizations…

To try to get its way, Washington turned to the usual weapons waged in economic warfare — sanctions and threats to cut off access to the global dollar payments system.

In late 2019, we chronicled how the authors of a sanctions bill signed by Donald Trump — Sens. Ted Cruz (R-Texas) and Ron Johnson (R-Wisconsin) — sent a nastygram to Edward Heerema, CEO of the Swiss contractor Allseas, a multinational employing 4,000 people worldwide.

It was an ultimatum: Give up your work on the pipeline… or “risk putting your company out of business forever.” Those were the senators’ actual words.

Heerema withdrew from the project.

But at that point, only 200 miles of the total 1,500-mile pipeline had yet to be built. Other companies, mostly Russian, stepped into the breach.

Now, with the project all but done, Team Biden is throwing in the proverbial towel. As early as today, Washington and Berlin will announce a deal that tries to save face for Washington; Germany will shovel $175 million to Ukraine for various energy projects.

We saw the writing on the wall two months ago: Pressing ahead with sanctions would have alienated Germany — Europe’s most powerful nation-state — to a point where Germany might start seeking alternatives to the U.S. dollar as a reserve currency. A bridge too far.

But while Washington’s economic war planners are retreating from Russia, they’re advancing on Iran and China.

Team Biden is looking to impose sanctions targeting Iran’s oil sales to China. The thinking is that sanctions, or the threat of them, would be leverage to help revive the Iran nuclear deal negotiated under Barack Obama but abandoned by Donald Trump.

Oil sales to China are a lifeline for Tehran. “There is not much left to sanction in Iran’s economy,” as an anonymous U.S. official explains it to The Wall Street Journal. “Iran’s oil sales to China is the prize.”

“The plan,” says the Journal, “would involve the aggressive enforcement of current sanctions already banning dealings with Iran’s oil and shipping industry through new designations or legal actions.”

Exactly what “aggressive enforcement” would entail the story did not specify. In the recent past, Washington has seized tankers hauling Iranian gasoline to Venezuela… as well as a ship carrying Iranian crude to an unknown destination.

Also left unsaid is how Beijing might react to a seizure on the high seas of crude it bought and paid for. And what would Washington do then?

Economic warfare is much like Mike Tyson’s description of boxing: “Everybody has a plan until they get punched in the mouth.”

[Ed. note: No less than $6.6 trillion changes hands every day as nations around the world wage economic warfare.

And now, for the first time, our Jim Rickards has developed a strategy that lets you skim impressive profits off the top of that total. We’re talking about average gains of 160% every 45 days. Follow this link and Jim will walk you through how his system works.]

To the markets, which are putting Monday’s sell-off even further in the rear-view.

Our floor-trading veteran Alan Knuckman isn’t surprised. He points us to figures from Bespoke Investment Group: Anytime the S&P closed below its 50-day moving average this year, it bounced back an average 3.95% in the following week. Until proven otherwise, the market is being moved by a “buy the dips” mindset.

Crude is rallying hard after the latest weekly inventory numbers from the Energy Department — up $2.71 at last check and only a dime away from $70 again.

The suspension began Sunday and is set to continue through this coming weekend. The railroad hopes that’ll buy time to clean up an enormous mess moving goods from trains to trucks.

“International supply chains have been straining under the weight of economic growth since the early stages of the COVID-19 recovery,” explains a Union Pacific spokesperson.

“Container processing at port terminals in Southern California has increased and Union Pacific’s rail shipments to and from the ports have risen and are near record highs. Union Pacific is concurrently experiencing significant congestion at our inland intermodal terminals, most notably in Chicago.”

Whelp, that ought to back things up real good at the ports of Los Angeles, Long Beach, Oakland and Tacoma.

Going into this newest snag, the most recent figures from IHS Markit show the typical container ship arriving in North America is waiting on anchor 33 hours for a berth. Two years earlier, it was only eight hours.

Gotta admit we didn’t see this coming at the outset of the pandemic: State budgets are so flush that 11 states have cut income tax rates.

In most states, fiscal 2021 ended on June 30. By and large, the states wound up “with substantially more revenue than most thought possible in the early days of the COVID-19 pandemic,” says a new study from the Tax Foundation.

“While one-time federal aid has played a large role in helping states withstand the pandemic, many states’ economies continued growing of their own accord, with income and sales tax collections proving resilient despite the circumstances.” 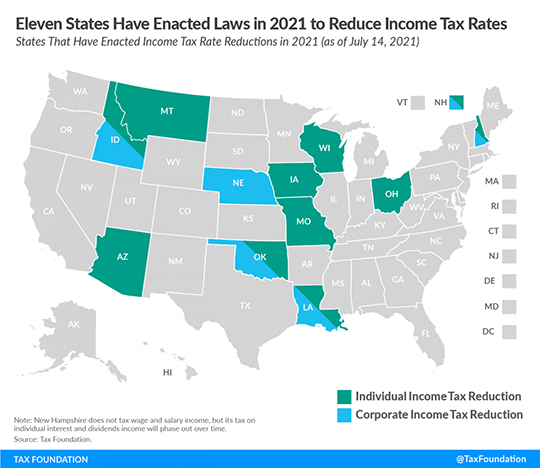 You can read the whole report here if you like; it does a comprehensive state-by-state rundown.

It’s not just that the politicos are feeling generous. Many see it “as a necessity,” says the report — “a way of demonstrating their state’s commitment to tax and overall economic competitiveness” in a world where growing numbers of remote workers can vote with their feet.

Word. When my wife and I made plans to take up the remote-work life several years ago, our hearts were in Wisconsin. But the yawning gap in income tax rates was one factor that ultimately tipped the scales in favor of Michigan. (Even after Wisconsin’s cuts this year, we’re better off in the Great Lakes State.)

From the “there is no justice” file… 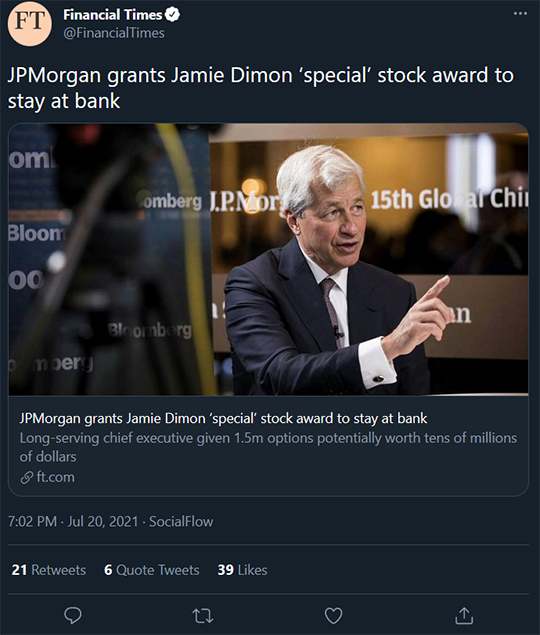 The JPMorgan Chase board has given CEO Jamie Dimon a “special award” of 1.5 million stock options, in hopes of encouraging him to stay on the job for several more years.

Dimon became CEO in 2005. By 2013, JPM had racked up $20 billion in fines for misdeeds before, during and after the Panic of 2008. It had also paid out over $32 billion in litigation, regulation and related expenses.

“Something is wrong,” observed money manager Barry Ritholtz, “with a board of directors that tolerates this sort of egregious incompetency and/or rampant illegality.”

Tolerates? “Richly rewards” is more like it. By 2015, we took note of how Dimon was likely the first banker to achieve billionaire status. (For most finance types, hedge funds or private equity are much more lucrative.)

From 2014–2020, JPM admitted to an unprecedented five criminal felony counts — which is five more felonies than the bank pleaded guilty to in the preceding 100 years. So of course the board is bending over backward to keep Dimon from pondering retirement now that he’s turned 65.

Dimon has become one of those people “who have moved beyond being motivated by money, who cannot realistically buy any more lifestyle with more money,” writes Bloomberg columnist Matt Levine, “but it’s still nice to feel loved, and the love language of a public-company board is pretty much always going to be options grants.”

To the mailbag, where our latest rant against how the Federal Reserve enriches the power elite prompts the following observation…

“I shuttle rental cars for Hertz. We live in Idaho Falls, Idaho. It’s two hours to Jackson, Wyoming. 2 and a half hours to Sun Valley, Idaho. Three hours to Bozeman, Montana. Our usual shuttle trips.

“We ride in a 12-passenger van to take or bring back rentals to where they are needed next. We meaning me and the other drivers.

“On our van ride to Sun Valley two weeks ago the conversation was about the annual Allen & Company event in Sun Valley, which is why we were picking up now-excess cars. The airport was still jammed with private jets even when we got there a week after. It was said that a trillion dollars of net worth was at that party.” 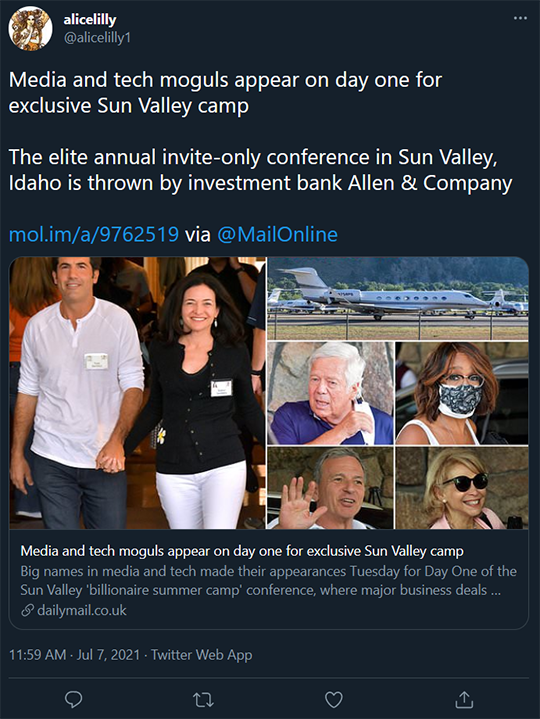 “My question is with the Fed and ‘friends’ coming to Jackson Hole next month, who has more power — the Fed or billionaires in Sun Valley?”

The 5: Your question assumes they’re not working in tandem. But as we said yesterday, it’s the billionaires who are able to position themselves closest to the Fed’s money spigot. That’s not a bug, it’s a feature.

By the way, most of the time, those Fed events in Jackson Hole every August don’t make news. We have a feeling this year might be different. Jerome Powell just might lay out a plan for “tapering” the Fed’s asset purchases — which as we saw yesterday have swelled its balance sheet to over $8 trillion.

Still more than a month away, but the market reaction could be hostile. Just sayin’…

P.S. Anyone watch the Frontline documentary about the Fed recommended here yesterday? If you’ve got any reactions after watching, shoot ‘em our way and we’ll share the best ones tomorrow.