It is perhaps the market mystery of the summer: Why is the U.S. dollar so strong relative to the globe’s other major currencies?

Here’s a chart of the U.S. dollar index. Granted, the DXY is a flawed yardstick: It measures the dollar against only six other currencies. The euro makes up 57% of that basket, and currencies from developing nations aren’t included at all. But for better or worse, it’s what market pros have in mind whenever they talk about a “strong” or “weak” dollar… 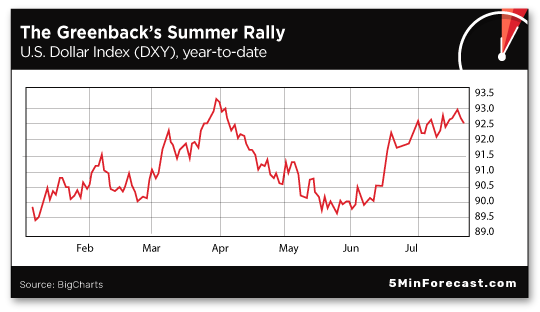 The DXY is near its 2021 highs after a huge rally the last five weeks or so. The dollar’s looking strong even though Wall Street has abandoned its “roaring recovery” narrative amid falling interest rates and rising COVID case counts.

Answer: Right now, America looks like the cleanest shirt in the dirty-clothes hamper.

The dollar rally “says more about global weakness than it does about U.S. strength,” explains our Jim Rickards.

“Global asset allocators are concerned by new coronavirus outbreaks, slowdowns in China, lockdowns in Australia, protests in France and a range of negative economic and political developments abroad. Their response is: When in doubt, run for the dollar.

“Asset allocators simply don’t like what they see around the world right now so they take the easy way out and buy dollar assets, mainly Treasury notes and bills.”

That explains why longer-term interest rates are falling again, by the way. Rates fall as prices rise.

Key point: “Before you can buy dollar assets, you have to buy dollars,” says Jim. “That accounts for dollar strength existing side by side with plunging interest rates.”

It all comes down to two words, in Jim’s estimation — capital flows.

“Hot money goes for the safe haven when the future is clouded as it is now. Asset allocators from sovereign wealth funds to institutions are not overly concerned about where U.S. growth will be six months for now or next year. They don’t care about what the Fed says about possibly raising rates in late 2022 instead of early 2023.”

Thus, “investors are selling euros, yen and Swiss francs for dollars, then investing the dollars in safe Treasury securities.”

So how long can this last? When does the strong-dollar trend reverse? And how can you play it?

“With a strong dollar,” says Jim, “the U.S. imports deflation, hurts its own exports (such as aircraft and agricultural products) and kills export-related jobs.”

With an eye toward the 2022 midterm elections, Team Biden will tolerate that state of affairs only for so long.

“At that point, it will be back to the currency wars, which never really ended. The currency wars have been running hot and cold since 2010. They’re about to heat up again.

“The U.S. will refuse to carry the global economy on its back. A cheap dollar is a quick (if temporary) fix for deflation and offers both job creation and export-led growth. The U.S. did this in 2011 (when the dollar hit an all-time low). The administration will do it again in 2022.

“The forecast is straightforward. For the next several months, the strong dollar will prevail. By late this year and into 2022, a weak dollar will be the remedy for weak growth,” Jim concludes.

And when that pivot point arrives, readers of Jim’s new premium advisory, Tactical Currency Profits, will be poised to pounce.

Several times a month, Jim and his team identify these pivot points in the currency markets — then they deliver actionable trades to readers.

Best part: You don’t have to set up a forex account or engage in risky leveraged trades to collect substantial gains. You just have to use a system Jim developed called COBRA — and set yourself up for average gains of 160% every 45 days. Click here and Jim shows you how it works.

Stocks are backing and filling today — as you might expect after two days of solid gains on the back of a big drop.

A healthy sign going forward: The rally yesterday and the day before “were not propped up by just a few mega caps,” says our chart hound Greg Guenthner. “Instead, we’re seeing most stocks and sectors benefiting from the rising tide.” If that sort of “breadth” can be sustained, that’s bullish, at least short term.

The economic data gods delivered a nasty surprise today: You can’t really see it on this chart, but first-time unemployment claims jumped substantially in the last week to 419,000 — way off the “expert consensus” calling for only 350,000. 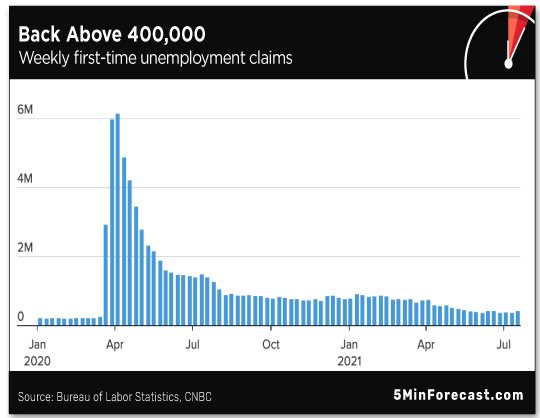 Elsewhere, the National Association of Realtors reports existing home sales rose 1.4% from May to June. But ouch, a median sales price of $363,000 — that’s a 19.6% leap so far this year.

Even with a typical 30-year fixed mortgage back below 2.8% for the first time since February, prices like that become a deterrent.

So far, it’s been a gangbusters earnings season.

Going into today, about 10% of S&P 500 companies have reported their numbers, and more than 85% have beaten the vaunted “analyst expectations.”

Zach says AmEx is due to boost its dividend sooner or later. At present, “It pays a quarterly dividend of $0.43, which gives you $1.72 per year. And with annual profits well above the company’s dividend, AXP has room to increase those payments to investors”

The “Delta variant” of COVID-19 is throwing a few assumptions into a cocked hat — which might open the door to some vaccine upstarts, says our tech-and-biotech maven Ray Blanco.

“The new variant is spurring the case for booster shots in those who are already vaccinated,” Ray tells us. “Reuse of existing vaccines has been suggested, but it might be problematic to add a third dose of Moderna or Pfizer’s mRNA vaccines to the mix. According to Jay Butler, deputy director at the CDC, mRNA vaccines have shown a stronger risk of serious side effects after a second dose, and a third dose could carry even higher risks of adverse reactions.

“That helps make the case that if we are going to do a third, ‘booster’ dose to deal with the newer Delta variant, we’d be better off using a vaccine based on a different modality.”

Ray is eyeing one in particular for readers of his Breakthrough Technology Alert. In addition to its booster potential, “billions of people haven’t been vaccinated, and this company’s shot is cheap to produce and easy to store and transport. The vaccine could earn the company billions.”

If Bitcoin mining has been around for over 12 years now… well, why not devote a museum to it? 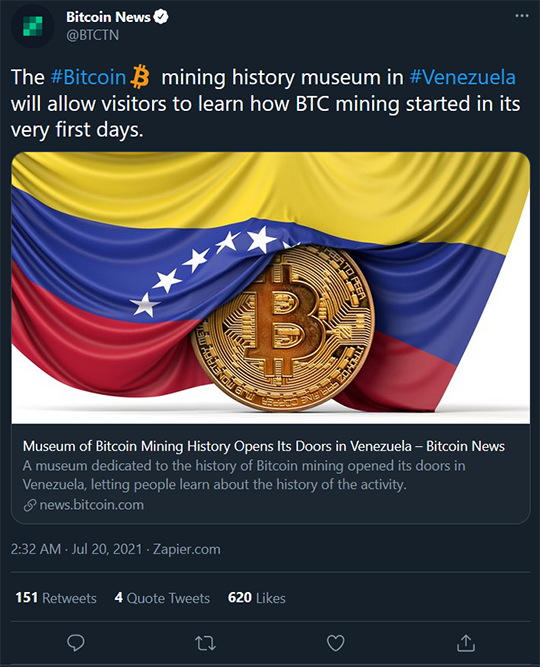 “A newly created Museum of Bitcoin Mining History opened its doors to the public in Venezuela last weekend,” according to Bitcoin News.

“The new initiative pushed by Criptoavila, a private company whose members have nine years of experience in the mining business, aims to introduce people to the world of Bitcoin mining. The museum, which is located in Caracas, will be open to all audiences and will be free to enter.”

OK, yeah, but what does it look like? What exhibits can you see but not touch? We’re talking about, you know, a virtual currency, after all. 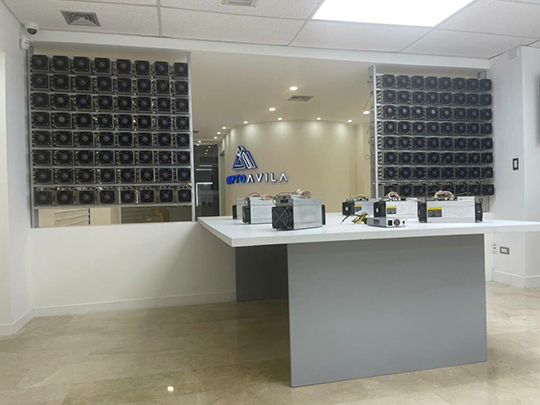 More from the article, cribbing from a Latin American crypto site: “According to Criptonoticias, the exhibition will show the evolution of Bitcoin mining since its central processing unit (CPU) origins, passing through the graphics processing unit (GPU) mining stage. Then finally arriving at the current application-specific integrated circuit (ASIC) or integrated circuit (IC) mining era that the industry is experiencing.”

As for the question, “Why Venezuela?” the Cointrust site informs us, “Venezuela is among the top hashrate providers to the Bitcoin network.” Now you know…

After our latest foray into the subject of sanctions and other economic-warfare measures, we heard from one of our longtime readers…

“One day the U.S. will get punched in the mouth for scattering sanctions like a gigilo scatters his flawed genetic material around. Perhaps one day the punch will not be in the mouth but elsewhere it might really hurt and be effective.

“The chickens will come home to roost.”

The 5: It’s for that reason we’ve been on the “de-dollarization” beat for seven years now — ever since Russian and Chinese officials convened a meeting aimed at finding ways to up their trade in rubles and yuan, bypassing the dollar.

Not coincidentally, that meeting occurred on April 24, 2014 — only weeks after Washington imposed sanctions on Russia for its annexation of the Crimean Peninsula.

By 2018, Washington was waging economic warfare against one-tenth of the world’s nations comprising more than a quarter of the globe’s population and an economic output nearly equal to our own.

People far beyond the targeted countries were feeling the effects — and starting to chafe. “The international reach of U.S. sanctions makes the U.S. the economic policeman of the planet, and that is not acceptable,” said the French finance minister, also in 2018.

It’s apparent that the risk of pushback from allies is the reason Washington is giving up its Ahab-level obsession with stopping the Nord Stream 2 pipeline. Sticking it to the Russkies isn’t worth alienating the Germans.

But the target nations still want to get out from under the dollar’s thumb. And yes, a time could come when they hit back hard. We’ll stay on top of it.

P.S. As nations wage economic warfare against each other, $6.6 trillion changes hands daily in the currency markets.

Until now, making money in forex was something best left to the pros — setting up a special account, using leverage to make risky bets and so on.

But the new COBRA system developed by Jim Rickards opens up this vast market to everyday folks with a regular brokerage account — using trades that keep your risk strictly limited, while giving you exposure to huge upside, an average 160% every 45 days.

For a limited time, Jim’s Tactical Currency Profits service is open to new subscribers. And we do mean limited.