“I never would have imagined writing this a year ago,” says our retirement specialist Zach Scheidt.

“You might remember me telling you to avoid some of the largest, most popular tech stocks. After all, for years these stocks have been…

“It just didn’t make sense to put too much capital into names that were trading at expensive prices compared with the profits that they were generating,” Zach says.

“And there were plenty of better options out there, helping to grow and protect your wealth without the risks that FAANG — Facebook, Amazon, Apple, Netflix and Alphabet — stocks carried.

“Hopefully, you took my advice,” he says. “A more balanced approach would have helped you tap into a shift toward small-cap value names.

“It would have helped you make money while the FAANG stocks were stuck treading water.

“But today, I’m changing my tune,” says Zach. “These FAANG stocks are now much more attractive than they were a few years ago.

“A few of these stocks actually look attractive compared with the earnings these companies generate and deserve a spot in your balanced investment portfolio,” he continues.

“Meaning, you can now invest without paying exorbitant prices and without the risk of these stocks falling sharply to a more reasonable valuation.

“How did this happen?” Zach asks.

“Whenever you have a stock price that’s way above what would normally be considered reasonable, the situation can be resolved in one of two ways.

“First, the stock can trade back lower. This typically happens when a bubble sends stock prices higher and then investors eventually panic and sell.

“Often these bubbles can be extremely painful and cause some of the most vulnerable investors to lose a lot of wealth,” says Zach. “But it doesn’t always have to end that way…

“Second, a company can grow into its high valuation,” he says. “As a company grows its business and generates more income, it can eventually expand to a size that matches the stock price the market has given it.

“For this to happen, the company’s profits must grow faster than its stock price. Over time, the two match up, giving investors a more balanced opportunity.

“Let’s take a look at two of these mega-cap tech stocks,” Zach says, “and show how these companies have evolved to match their high stock prices.

“Google’s parent Alphabet Inc. (GOOG) has traded steadily higher over the past year… 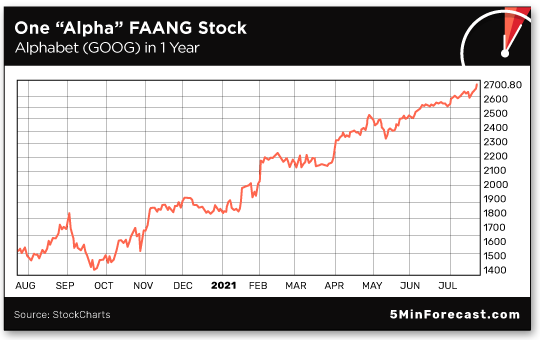 “What you can’t see on the chart is the swift growth of Google’s underlying profits — along with very optimistic expected growth over the year ahead.

“The strong fundamental growth for GOOG has Wall Street analysts projecting earnings of $95 per share next year,” Zach says. “Based on GOOG’s current price near $2,700, investors are paying 28 times earnings for the stock.

“So while this may still be a premium price compared with some of the value stocks I’ve recommended, it’s a far cry from the company’s inflated price-earnings ratio (or P/E ratio) that investors had to pay in the past.

“Another factor driving success for investors is the fact that Alphabet has been using its cash to buy back shares from the market,” Zach notes. “This leaves fewer shares outstanding, which leaves more profit for every share of GOOG outstanding.

“As long as this trend keeps up, GOOG will continue to be a great investment for years to come.

“While shares of GOOG continued their climb over the past year,” Zach says, “Apple Inc. (AAPL) has been moving sideways.” Range-bound… 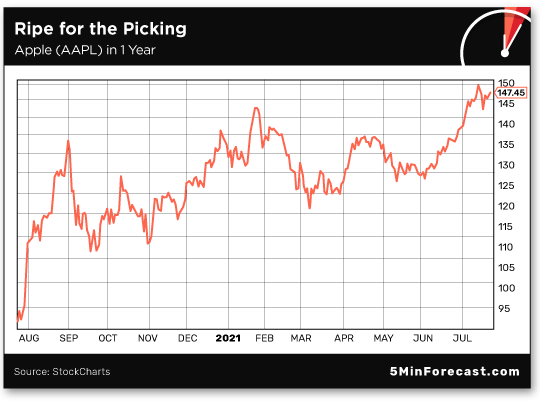 “It may be boring to sit and hold a stock that stays in one place for a few months, but if you’re watching AAPL’s fundamentals, there’s a lot to get excited about.

“Apple’s profits have been growing quickly,” says Zach. “In fact, over the past 12 months, AAPL earnings per share have increased by more than 40%.

“Going forward, analysts expect Apple stock to earn $5.35 per share. Based on the current share price near $145, the stock is trading about 27 times expected earnings.

“Again, that’s not a cheap price for any stock. But given the consistency with which AAPL grows earnings, the company’s growing dividend and the stability in Apple’s overall business, shares now look very attractive.

“Of course, I wouldn’t recommend going all in on any one of the FAANG stocks (or into any one area of the market),” Zach advises.

“Having a balanced approach to investing will always be a cornerstone of your success.

“But with the mega-cap tech companies now starting to grow into the high stock prices they’ve enjoyed, I think these big companies deserve consideration as a part of your overall retirement investment plan,” he concludes.

“We began the week with the bears trying to flex their muscles,” says analyst Greg Guenthner. “But it appears the week will end with them retreating back into the woods.”

Which brings to mind… 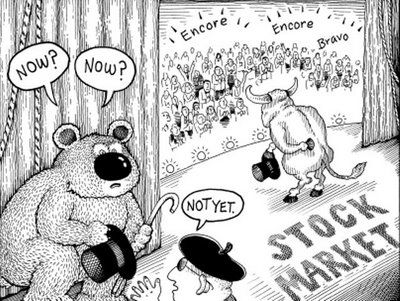 “Headline earnings are adding to the growing positive vibe,” he says. “TWTR and SNAP both beat estimates and popped double-digits after hours. So far today, TWTR is up… and SNAP is flying to new highs.’

“It’s good to see a little excitement around some of these recognizable tech stocks,” Greg says.

And he aligns with Zach’s sentiments: “In fact, we’re starting to see some more money pouring back into growth, which is great news for traders,” he says.

Precious metals? Gold and silver are hanging out above $1,800 and $25 respectively, and oil is taking a breather at $71.77 for a barrel of West Texas Intermediate.

“Crude is a barometer of the macro market,” our market analyst Alan Knuckman said in a recent interview at Fox Business’ Cavuto: Coast-to-Coast. “If you look at [crude’s] comparison with the stock market, there’s a very, very high correlation. 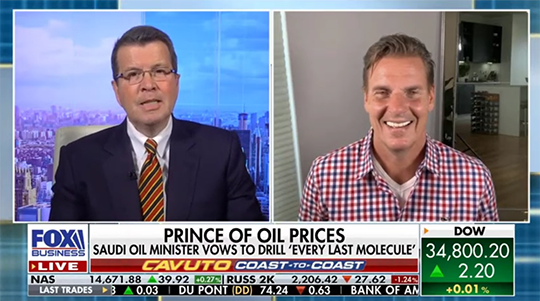 “The stock market is up 45% in the last year, and crude oil is up 35%,” he said. “While we may not like paying higher gas prices, it’s a sign of a booming, bull market. There are a lot of optimistic things happening…

“The most important component that I want to focus on is that when crude oil was at an all-time record high, the dollar [index] was at 70,” Alan noted. “The dollar index is at 90 right now. It’s got temporary firmness, but even in the face of that, crude oil’s been strong.

“I’m looking for this trend to continue, but like the stock market, you’ve got to be able to buy the dips and respect the overall trend,” Alan said in closing.

The major economic number of the day, the Flash U.S. Composite PMI Output Index, came in at 59.7 this month, down from June’s 63.7. July’s number, in fact, represents a four-month low; however, recall that any number above 50 represents expansion.

For further context, the flash services PMI registered at 59.8 in July, down from 64.6 in June, and off analysts’ expectation of 62. “Where a loss of growth momentum was noted,” says IHS Markit, “firms linked this to labor shortages and difficulties acquiring stock.”

On the other hand: “Manufacturing continues to power ahead,” Reuters says. “The survey’s flash manufacturing PMI rose to an all-time high reading of 63.1 from 62.1 in June.” Analysts anticipated a reading of 62.1 in July, or zero change from June’s number.

While June’s numbers came in less than expected, it was spun as good because the economy wasn’t running “too hot.” The narrative today is Q2 represents “peak growth” post-pandemic. So… Where to from here?

Wells Fargo, the eighth-largest bank in the world, announced it would be terminating personal lines of credit.

According to the bank, after a review in 2020, Wells Fargo found the lending instrument had fallen out of favor with customers who seem to prefer personal loans.

(For those unfamiliar, a personal line of credit — offered in amounts from $3,000–100,000 — is similar to a credit card, but generally has a higher credit limit and a lower APR.)

To be clear, Wells Fargo isn’t just shutting down personal lines of credit moving forward; no, customers with existing lines of credit were notified that their accounts would be closed too.

Consumers should be aware: Not only will they not be able to draw from their lines of credit, but their credit scores might be dinged in the process.

“With Wells Fargo shuttering an account, there is a good chance it will have an effect on people’s scores… though the bank claimed it does not ‘determine or know’ the factors that make up a credit score,” says an article at Yahoo Finance. FICO is a mysterious entity…

For those with balances remaining on their credit lines, Wells Fargo is offering loans “locked at a reasonable rate and then minimum payments would be required to pay off the rest.” But consumers will have to apply for a loan, and the bank can’t tell whether dinged credit scores will affect consumers’ interest rates. Dizzying… The other alternative? Transferring balances to a Wells Fargo credit card.

At any rate, Wells Fargo claims it has been considering closing personal credit lines for a year… and waited to do so until after the worst of the pandemic. But we all know Wells Fargo isn’t exactly a beacon of integrity. (Ahem, recall the 2016 fake accounts scandal?)

“[Wells Fargo] doesn’t care that many of these personal lines of credit are actually used as working capital for small businesses,” Jim Rickards says.

“The personal lines of credit Wells Fargo is closing may result in small businesses having to shut their doors or scale back operations,” says Jim.

“Wells Fargo said it could meet customers’ credit needs with credit cards instead of PLCs. Of course, credit cards have high interest rates, annual fees and a 2.5% merchant acquirer fee on each transaction.

“This solution… is a transparent effort to charge higher fees and impose tighter restrictions on its customers,” Jim says.

“At what point does a bank cease to be a business offering financial products at a fair rate and morph into a parasite that sucks customers dry, using every means at its disposal?” Jim muses.

“New research using artificial intelligence and voice analytics rates Powell as the most negative of the last three chairs of the U.S. central bank,” says an article at Reuters.

He’s been a little preoccupied…

“… and Ben Bernanke before that [was] a comparative cheerleader.”

“The effect, as much as 200 basis points on the S&P 500 (.SPX) index for a shift from a positive to a negative tone at a Fed chief’s news conference.”

The NBER study concludes: “It appears that a certain level of acting skill may be helpful to ensure that the public receives the policy message fully and correctly.”

Well, when he first accepted the Fed position, Dave did say Powell had the looks of an “aging matinee idol.” Guess he could use a few more method acting lessons.

You enjoy the weekend, and take care!