Gotta say, after the recent space forays of Richard Branson and Jeff Bezos… we feel a little sympathetic to this line of argument… 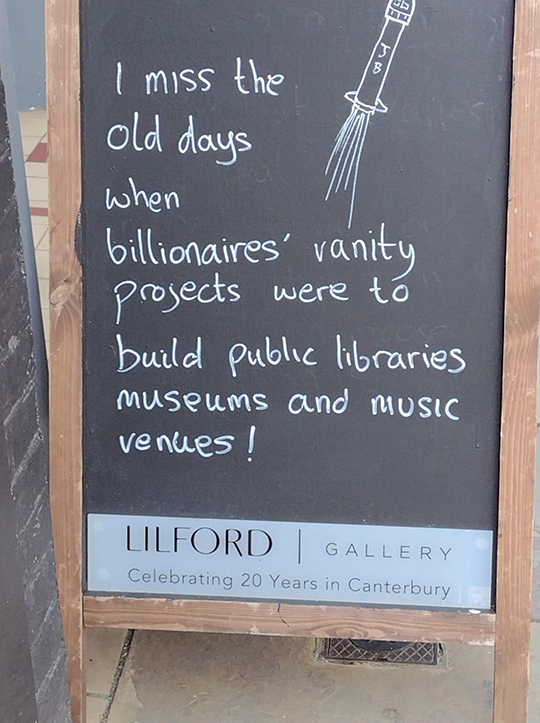 Yes, of course we’re sympathetic to the counterargument that it’s a free country (kinda sorta) and the billionaires are free to do with their billions as they please.

Our temptation is to simply throw up our hands in disgust. We’ve had it with these oligarchs who’ve feathered their nests in large part because they’re able to position themselves closest to the Federal Reserve’s endless money spigot… while everyday folks deal with the less pleasant consequences of Fed money-printing like rising food and energy prices.

But our tech maven Ray Blanco implores us not to give up hope. There’s value, he says, in what look superficially like suborbital ego trips.

“Space technology has resulted in the development of technologies that have changed the lives of many around the world,” Ray reminds us.

“It has resulted in the development of products like prosthetic limbs, GPS, better farming equipment, safety in weather warnings and anything to do with the internet.

“You solve problems and create better technology by pushing the limits to the extreme and learning from those moments.

“And while everyone focuses on the fact that the billionaires were aboard the spacecraft, the astronauts on these flights were also collecting important data.

“Moreover, these trips were extremely cheap compared with a normal space flight, which can cost millions of dollars to perform,” Ray continues.

“Think about where airplanes were 100 years ago. They were extremely dangerous, inefficient and very costly. That’s where we are today with space flight. It may start as space tourism for the ultra-wealthy who want to be called ‘astronauts’…

“But eventually, this tech will be better understood, improved, commercialized and open for the masses,” Ray concludes.

“That means flights that sometimes take days to get across the world could be done in a couple hours.

“It doesn’t just stop at human travel, either. Cargo shipments that are time-sensitive and need to go across the world can be done in a fraction of the time.

“Then, once we start mastering suborbital flight, you have a whole slew of other ventures out in space. Mining asteroids for precious materials, setting up space stations farther out… and eventually even colonizing different areas of space, like what Elon Musk wants to accomplish with Mars.”

Ray’s bottom line: “Don’t think of Branson’s and Bezos’ trips as just a joyride. They were also a stepping stone to something better.”

Ray is scouting out the very best investing opportunities on the back of those trips — something comparable to the 250% gains he generated for his readers as Virgin Galactic went public over 18 months ago. In the meantime, here’s his favorite space play of the moment.

While the major U.S. stock indexes eked out record closes again yesterday, a three-peat is looking like a tough climb.

The big mover of the day is Tesla — down 2.3% as we write, in what looks like a sell-the-news reaction to TSLA’s record quarterly profit.

The big economic number of the day is a mixed bag. The Commerce Department says durable goods orders — that is, orders for anything designed to last for three years or longer — rose 0.8% in June. That’s far short of the “expert consensus” among dozens of economists polled by Econoday, who were looking for a 2.1% jump.

But that’s just the headline figure. Strip out aircraft and military hardware — both notoriously volatile month to month — and orders for “core capital goods” rose 0.5%, in contrast with expectations for a flat number. Even better, the previous month’s figure was revised higher.

Don’t count out the homebuilders yet, counsels our retirement specialist Zach Scheidt.

True, in recent days we’ve chronicled several indicators that point to a slowing housing market — high prices crimping affordability, even with low, low interest rates. And homebuilder stocks are pulling back as a consequence.

“This sets up a perfect risk-reward opportunity,” Zach suggests. “If home prices pull back, homebuilder stocks are already priced lower to account for this risk. So we shouldn’t see much more of a pullback in these names. In other words, there’s not much risk because skeptical investors have already set the bar low.

“On the other hand, if home prices continue to increase, and homebuilder profits continue to grow, stock prices should surge higher. Skeptical investors will be proved wrong and buyers should scramble to buy these stocks.”

You could play it with ITB, the big homebuilder ETF, which just rose back above its 50-day moving average. For individual names in the sector, Zach likes DR Horton (DHI) and Lennar Corp. (LEN) — both of them with P/E ratios in the single digits. Cheap…

Supply-chain snag of the day: The chronic shortage of tanker truck drivers is on the verge of fouling up airline schedules even more than they are already.

More than two months ago we cited figures from the National Tank Truck Carriers: A shortage of qualified drivers had idled 20% of available fuel trucks. Many drivers chose to retire during lockdown; others took on the easier job of hauling Amazon boxes.

Result now: “American Airlines says it’s running into fuel shortages at some smaller and midsize airports,” reports The Associated Press, “and in some cases the airline will add refueling stops or fly fuel into locations where the supply is tight.”

Supply is tightest out west, and American expects the situation to persist through mid-August. The airline is urging pilots to conserve fuel by, among other things, leaving one engine off while taxiing.

As for other airlines, Southwest says all’s well but Delta admits to feeling the pinch — especially at Reno, Nevada.

Meanwhile, we see the shortage of help in the restaurant industry has put one CEO in an especially awkward spot.

Domino’s Pizza reported its quarterly numbers last week. On the call with analysts, CEO Richard Allison acknowledged that in some parts of the country, a driver shortage has led to longer delivery times. “We’ve slipped a minute or two,” he said. “That is a big area of focus for us as we look going forward.”

But… a minute or two relative to what? CNN’s account of the call says, “A Domino’s spokesperson declined to elaborate on the exact time period that he was referring to.”

As well they wouldn’t. It was a generation ago you might recall Domino’s got in trouble for its guarantee of delivery within 30 minutes or you get $3 off your pizza.

From Wikipedia: “In 1992, the company settled a lawsuit brought by the family of an Indiana woman who had been killed by a speeding Domino’s delivery driver, paying the family $2.8 million. In another 1993 lawsuit, brought by a woman who was injured when a Domino’s delivery driver ran a red light and collided with her vehicle, the woman was awarded nearly $80 million by a jury, but accepted a payout of $15 million. The half-hour guarantee was dropped that same year.”

Allison didn’t join Domino’s until 2011. But he surely knows the history.

“Stupid should hurt. Sometimes it should hurt a lot. That’s how we as children learn to not do stupid things,” a reader writes after Jim Rickards’ take on Wells Fargo yanking its personal lines of credit, surely to the detriment of some small-business owners.

“Wells Fargo is a bank (allegedly) with a long and illustrious and very well documented history of sodomizing their own client base over and over and over again. In light of their well-known history, anyone who is doing business with them in 2021 deserves every bad thing that happens to them. Sorry, not sorry.”

The 5: Meanwhile, the fox will be watching the henhouse at the Criminal Division of the Justice Department.

The new division head, confirmed by the Senate last week, is Kenneth Polite — who comes from a law firm that frequently represents the banking giants. His disclosure form reveals JPMorgan Chase was one of his clients within the last 12 months, a period when the feds brought two felony counts against JPM.

And then there’s this, flagged by the invaluable Wall Street on Parade website: “Despite Polite owing more than $1.5 million in debts according to his financial disclosure form and public mortgage records; paying over 18% interest on an outstanding balance on a credit card; 19.99% interest on a personal loan; and now accepting a job where his income will be slashed by about 77% – not one senator on the Senate Judiciary Committee asked a single question about this man’s bizarre financial picture during his confirmation hearing on May 26 or in written questions that followed.”

“Wait a minute,” a reader writes after yesterday’s 5. “I just read your item about the CDC considering mask mandates for vaccinated Americans.

“That doesn’t sound like a ringing endorsement for the efficacy of the vaccine. Or masks.

I know the source was CNN, but still….”

The 5: Remarkable, right? But again, it’s the imperative of any government official: “Something must be done. This is something. Therefore, it must be done.”

After we cast a side-eye toward the “11-dimensional chess” capabilities of Chinese leaders (and government officials of any nationality), we got this response…

“While sharing your general skepticism regarding the foresight of politicians, I would point out that the influences on Chinese strategy — not chess, but Go and Sun Tzu — support your reader’s suggestion that China is thinking several moves ahead in the currency wars.

“It may not be so much that they are playing super-chess but rather that American policymakers are playing checkers while their opponents study strategy deeply as a matter of course.”

The 5: Entirely possible. Then again, Xi Jinping keeps turning the screws on some of his nation’s most prosperous companies. The latest developments have sent the Shanghai Composite index tanking 3% in just the last three trading days.

If Xi truly fancies himself the next Mao Zedong… well, remember Mao was the guy who tried the “Great Leap Forward,” with backyard steel mills among other tragic absurdities.

Mao was as inspired by Sun Tzu as any other Chinese leader. But it was only after he was dead that China started climbing out of poverty. Can’t discount the possibility that Xi will send China backsliding…

Not bad for just two weeks. And for a limited time, you can still get in on Tactical Currency Profits at the charter-subscriber price. Jim shows you how his trading system works at this link.