Cryptocurrency prices are hanging tough in the face of perhaps the most credible threat of U.S. regulation to date.

“We just don’t have enough investor protection in crypto. Frankly, at this time, it’s more like the Wild West,” Securities and Exchange Commission chair Gary Gensler said yesterday at something called the Aspen Security Forum — which, yes, is an offshoot of the hoity-toity power elite hangout Aspen Institute.

Gensler promised the SEC will use all its current powers to regulate crypto, and called on Congress to enhance those powers.

Presumably, Gensler knows a thing or two about crypto, having taught a crypto course at MIT in between gigs for the Obama and Biden administrations.

But there he was with the hoary old complaints about crypto in his speech. “Mr. Gensler,” reports The Wall Street Journal, “said large parts of the sector operate outside of regulatory frameworks that seek to protect investors and consumers, reduce crime, promote financial stability and protect national security.”

It’s the tired song-and-dance about how there’s no “use case” for crypto beyond money-laundering, tax evasion, yada yada. 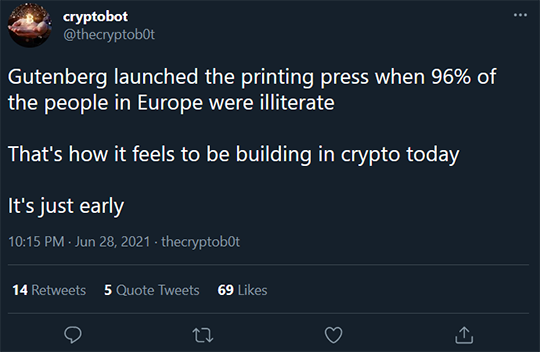 Jim Bianco, head of the institutional research outfit that bears his name, elaborated: “In 1440, how many demanded Gutenberg explain in detail the use case for the printing press when only 4% could read? Answer, the printing press created widespread literacy when 96% thought it was not necessary.

“So,” he asks, “what is crypto creating that most think is not necessary?”

We’re seeing glimmers of possibility with the development of DeFi or “decentralized finance.”

DeFi is the broad-brush name for software applications whose users can borrow, lend, earn interest and trade assets. Much of it is built on similar architecture to cryptocurrencies.

Right now its most compelling “use case” is for people borrowing against their crypto holdings to make even bigger bets. But what makes DeFi so attractive is that the software is automated, not run by people or companies. Nor do they hold traders’ assets.

So in the long run, DeFi has the potential to cut out all manner of middlemen in the realm of finance — banks, credit card companies, even those hip, trendy “tech” companies like PayPal and Square.

That’s what has Gensler worried. He’s a “TradFi” or traditional finance guy, complete with 18 years of faithful service to Goldman Sachs — making partner at the tender age of 30 — before he joined the Clinton Treasury Department then run by the ultimate power-elite money man, Robert Rubin.

Yes, it’s uncharted territory. That’s what makes it so exciting. Gensler, the Treasury Department, the Federal Reserve… they’re all trying to make heads or tails of the phenomenon before it steamrollers them.

No wonder Frank Holmes, old friend of The 5 and head honcho of the U.S. Global funds family, has updated his longtime guidance: In addition to placing 10% of your portfolio in gold and mining stocks… he now suggests a 2% allocation to crypto.

Even within that 2% you’re best off spreading your bets and diversifying into several cryptos. You stand a good chance that most will go to zero. But you need only one to pay off enormously and make you forget about the losses in the others.

We’ll stay on top of the story…

On to more traditional asset classes: The major U.S. stock indexes are flat to down on this hump day.

The mainstream can’t settle on an explanation: The ADP job number was a disappointment. Ditto for General Motors’ earnings; GM is down more than 8% on the day. Or maybe it’s that lingering trepidation about the Delta variant screwing up the “reopening” of the economy — to say nothing of the Lambda variant or something called Delta-plus.

Gold continues holding the line on $1,800; silver’s down a bit to $25.39. Crude is taking another dive after the weekly inventory numbers from the Energy Department — down more than two bucks as we write to $68.32.

Sign of the times: The company known as “the Tesla of China” plans to float $1.9 billion worth of new shares… not in New York.

While the electric-car maker Li Auto listed on the Nasdaq last year, the firm plans to issue these new shares closer to home, in Hong Kong.

“The move comes as Chinese firms listed in the U.S. face increasing scrutiny by Beijing and Washington,” reports the BBC, with characteristic understatement. If you were with us yesterday, you’ll recall it also comes on the heels of a Chinese state-run newspaper denouncing the country’s online gaming firms as peddling “spiritual opium.”

But it’s not just this week. “Chinese stocks fell about 10% in late July,” says our Jim Rickards. “The Nasdaq Golden Dragon China Index fell 15%. That particular index lost $769 billion in value in a matter of days.

“The immediate catalyst was a Chinese government crackdown on DiDi, a ride-hailing app (similar to Uber) that had just completed an IPO on the New York Stock Exchange. The Chinese Communists were enraged that DiDi did not consult with the Communist Party more closely before the IPO and did not modify its app to reduce the amount of information available to users.”

“The message to global investors is clear,” says Jim. “Loyalty to the Communist Party comes first before financial gain to investors or entrepreneurs.

“China has nothing against large companies as long as they toe the party line. But that is inconsistent with the flexibility and transparency demanded by U.S. and European markets and regulators.

“China’s not-so-hidden agenda is to cause Chinese companies on U.S. markets to delist and then re-list their shares on the Hong Kong Stock Exchange, also under Communist Party control.” Word to the wise…

On the matter of New York’s impending vaccine mandate to enter restaurants, bars, gyms and indoor entertainment venues, we pass along the following without comment…

“So where’s the limit on children?” a reader writes after we took note of the rather draconian implications of a climate-change study.

“Anyone with any environmental education knows the worst thing a young couple can do to the environment is make babies.

“The greenies want to limit the size of my house, how much gasoline I burn, how many flights I take, but no limits on the number of children I make who will build a house, burn gas, fly, buy clothes, eat, etc.?

“I am sure there are dumber ideas yet to come. Looks like I better drive the hell out of my V8 Mustang while I still can!”

The 5: Also worth noting: In general, the more prosperous a society becomes, the fewer children people have.

Which leads to the counterintuitive conclusion that if you really think climate change is a problem, the best solution would be to bring middle-class prosperity to as many people in as many developing countries as possible…

Next, a riposte to Byron King’s assertion here yesterday that “politicians have not fully considered the total lifecycle impact of the decision” to favor development of electric vehicles.

“Of course they have!” says a reader. “As you state, it’s all about ‘driving up sticker prices and locking large segments of the population out of car or truck buying…’

“Let them take buses or light rail from their (no more than) 640-square-foot apartments to their workplaces! Groceries? They will each receive weekly delivery of their government food ration, right to their door. Vacations? They will take time off when they are permitted, and then they will take a bus to relax at a government-sponsored ‘workers’ resort.’”

The 5: At the risk of repeating ourselves, there’s an unintended consequence of the pandemic that does not advance the climate-change agenda — namely, all those people who’ve fled big-city high-rises and bought cars over the last 16 months.

Pivoting to a new topic, “I am confused by what appears to be so much misunderstanding of federal expenditures,” a reader writes.

“You are right when you point out the amusing misstatement to ‘keep your government hands off my Medicare.’ I wonder if the source of this quote truly understood where Medicare comes from.

“It is equally interesting that most citizens and taxpayers are unaware that three federal agencies account for approximately 60% of all federal expenditures, each accounting for about 20% of the total. The big three: Defense, Social Security and CMS (Medicare and the federal share of Medicaid).

“While two of the three face serious funding shortfalls the third (Defense) is garnering greater scrutiny regarding the failure of so many of its weapons systems. I wonder how many of us realize that underfunding defense and health care might save many taxpayers significant dollars but could result in many more unemployed — and I’m not speaking about government employees. I am talking about unemployed defense contractor employees and hospital and nursing home employees. As for Social Security, compare its funding problems with the advent of Medicare (hint: access to better health care means longer life means more SSA checks).

“Unfortunately for all of us (including members of Congress) each of these big three programs permeates every congressional district in the nation. Our futures are inexorably tied to the ups and downs of each of these programs. As they say at the theme park after they have strapped you into your seat, ‘Relax, and enjoy the ride.’”

The 5: Who says defense is “garnering greater scrutiny”? The Biden administration asked for a 2022 Pentagon budget of $715 billion… and the Senate Armed Services Committee just jacked it up to $740 billion. The additional funds passed by a vote of 23-3. (Who says bipartisanship is dead?)

Also, please don’t labor under the idea that defense spending is somehow an economic net-plus. Every tax dollar that’s extracted from the productive economy for the military is a dollar you and I can’t spend bettering our lives.

President Eisenhower even ran the numbers during his “Cross of Iron” speech in 1953: “The cost of one modern heavy bomber is this: a modern brick school in more than 30 cities. It is two electric power plants, each serving a town of 60,000 population. It is two fine, fully equipped hospitals. It is some 50 miles of concrete pavement. We pay for a single fighter plane with a half million bushels of wheat. We pay for a single destroyer with new homes that could have housed more than 8,000 people.”