We return this morning to a call Jim Rickards made in our virtual pages three weeks ago: “For the next several months, the strong dollar will prevail. By late this year and into 2022, a weak dollar will be the remedy for weak growth.”

That was on July 22. You can already see Jim’s forecast starting to be fulfilled in this chart of the U.S. dollar index… 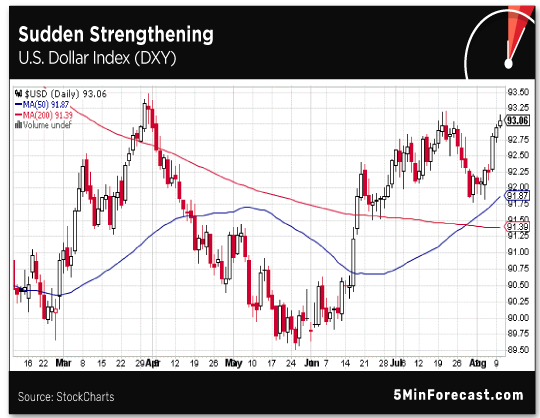 A good chunk of that move up came on Friday with the release of the July job numbers — which the mainstream gave a near-Pollyannaish spin. “It is a welcome sign that, as of the middle of last month, the economy is healing rapidly,” said New York Times business columnist Neil Irwin.

“The White House and the U.S. Treasury do not understand just how weak the U.S. economy is at the moment,” Jim Rickards counters.

As you saw in the Calculated Risk chart we shared with you on Friday, the job losses from the pandemic recession — even now, 17 months after the first lockdowns — are still worse than the worst job losses from the recessions in 1973–75 and 1980–82. (And if you’re old enough to remember, those were pretty bad.)

In addition, Jim has pointed out to us in recent days how there’s less than meets the eye with the “rosy” second-quarter GDP numbers. Exports are looking punk, with the rest of the world recovering from the pandemic lockdowns at an even more sluggish pace than the United States. In addition, private incomes have been flat for eight months now.

“Joe Biden and Janet Yellen will get the message about the weak economy by November of this year,” says Jim, “when the third-quarter GDP and several more months of inflation and employment data make it clear.

“By then, it will be too late to stop the economic slide. The 2022 midterm elections will be less than a year away. The White House will panic and turn to the Treasury for measures to weaken the U.S. dollar.”

So there’s the longer-term forecast — weaker dollar, late 2021 into 2022. But what about Jim’s shorter-term outlook for a stronger dollar? What gives, really?

“The answer is that a global liquidity crisis is now underway,” says Jim.

“Crises of this type do not emerge overnight. They often take a year or more to grow behind the curtain before markets and the general public are fully aware of the gravity of the situation.”

But with that in mind, Jim lays out four warning signs of global financial distress…

“It’s impossible to predict exactly when a global liquidity crisis will hit the headlines if it even becomes that acute,” says Jim.

“But these trends have been growing stronger since March, indicating that pressures are building and a crisis may emerge as early as this October,” Jim concludes.

“What is certain is that if a crisis emerges, the dollar (and gold) will strengthen in response to a global rush to safety.”

Jim has readers of his trading service Tactical Currency Profits perfectly poised to reap big gains from the rising dollar now, a falling dollar later and wild fluctuations in other major currencies around the globe.

Let Jim walk you through how COBRA works when you follow this link.

The Dow and the S&P are reaching further into record territory on this hump day.

Really, there’s nothing going on this week to alter our Alan Knuckman’s near- to medium-term targets of 4,500 on the S&P and 15,500 on the Nasdaq.

The big economic number of the day is inflation — which appears to be plateauing.

The Labor Department says the consumer price index jumped 0.5% from June to July, in line with expectations. That translates to a year-over-year inflation rate of 5.4%. While that’s the highest since the summer of 2008, the key point is it’s no higher than it was last month.

This, too, aligns with a call Jim Rickards was making much of this year — that inflation would top out in the summer and begin to retreat for the balance of 2021.

True, it’s not as if the price increases you’re eating in your daily life will get dialed back… but at least the rate of increase is leveling off. Small favors, right?

Meanwhile, the real-world inflation rate from Shadow Government Statistics — using the same methodology the feds used over 40 years ago — works out to 13.4%. This figure is also plateauing.

The next new COVID-19 vaccine might well be available late this year.

Our science-and-wealth maven Ray Blanco has been following the fortunes of a drugmaker that’s valued at only 10% of Moderna.

“Moderna won the small biotech company COVID-19 sweepstakes by being one of the first to receive an FDA Emergency Use Authorization,” Ray reminds us. “It will earn somewhere north of $20 billion this year. But that’s already baked into the company’s whopping $195 million market cap at the moment.”

From where Ray sits, Moderna serves as the model for the company he’s following as it awaits its own Emergency Use Authorization. (Yes, we’re withholding the name out of respect to his paying subscribers.)

“There are still billions of unvaccinated people worldwide representing an enormous, as-yet-untapped market, and the company’s vaccine put on a strong showing in massive clinical trials in the U.S. and U.K., where it demonstrated strong efficacy and safety.

“Plus, even for the already vaccinated, a strong market is emerging as the more transmissible Delta variant rages along with calls for additional booster shots to protect people.”

And with evidence that third shots of Moderna-like mRNA vaccines generate stronger adverse reactions… well, you can see the potential for a newcomer. We’ll keep you posted.

Wow, they snuck in a mileage tax in the dead of night. Sort of.

We mentioned a while back how the White House floated the idea of a per-mile vehicle tax to help pay for an “infrastructure” bill — and quickly shot it down.

But buried in the spend-a-palooza infrastructure bill passed by the Senate yesterday is a provision for a “pilot program” exploring the feasibility of such a tax.

Oh, and to ensure that drivers of electric vehicles help pay for the upkeep of the highway system, seeing as they don’t pay gasoline tax.

The experiment could take as long as three years — assuming this provision even makes it into the final legislation. The House plans to interrupt its summer break to return to D.C. on Aug. 23 to take up both infrastructure and a $3.5 trillion budget blueprint.

“Financial canceling,” reads the subject line of a reader’s email — no doubt a response to Monday’s exploration of social media’s ham-fisted enforcement against “hate speech” and “misinformation” — now spilling over into financial services.

“We already had this type of activity occurring with ‘Operation Choke Point’ where gun dealers, pawn shops and marijuana dealers were denied ordinary banking services,” the reader writes.

“On a more ridiculous note, here in my town, Wells Fargo bank refused to maintain an account for the UDC, United Daughters of the Confederacy. Their domestic terrorism today consists almost totally of a group of senior citizens who meet primarily for social occasions, teas and luncheons.

“I haven’t seen a group of 80-year-old ladies charging the barbed wire fencing around the Capitol with the Confederate Battle Flag.”

The 5: The reader refers to an effort by the Obama-era Justice Department, pressuring banks to close the accounts of legal businesses that might, hypothetically, have a tie to “money laundering.”

Payday lenders, firearms merchants, tobacco shops, even adult film starlets — they all got nastygrams from their banks saying their business was no longer wanted.

We chronicled the effort in real-time. We heard from a reader in 2014 who told us Chase was closing all five of his business accounts along with his family’s accounts, even though his self-described lines of business — “financial services, a retail store and an affiliate marketing company” — didn’t sound like potential money-laundering fronts.

The Trump administration put an end to Operation Choke Point in 2017, although it had already run into stiff resistance before then in the form of lawsuits filed by targeted businesses against the FDIC — the agency that issued broad-brush guidance the banks were acting on.

For that reason, a revival of Operation Choke Point — at least in the form it took originally — appears unlikely. But as we’re already seeing, there are other ways the feds can bring pressure to bear.

Meanwhile, to be clear, cannabis businesses have never had access to the banking system— because banks are federally regulated and marijuana remains banned at the federal level.

That might be on the verge of changing, though. More about that tomorrow.

P.S. Amazing fact about the currency markets: $6.6 trillion changes hands every day as the dollar and other currencies fluctuate in value.

But until now, skimming some of that $6.6 trillion for yourself was a complicated and very high-risk affair.

Jim Rickards’ COBRA system — developed in part from financial war games he took part in at the Pentagon — makes it easy.

No special trading account, and no leverage that can blow you up… yet you could bag average gains of 160% every 45 days. Click here to see how it works.