Yesterday, Twitter’s Jack Dorsey issued a cryptic message on the “microblogging” website he founded in 2006…

Few people got it. We did right away. Earlier this year, we drew your attention to a website called WTF Happened in 1971? It’s chock-full of charts like this one, nicked from the Center on Budget and Policy Priorities… 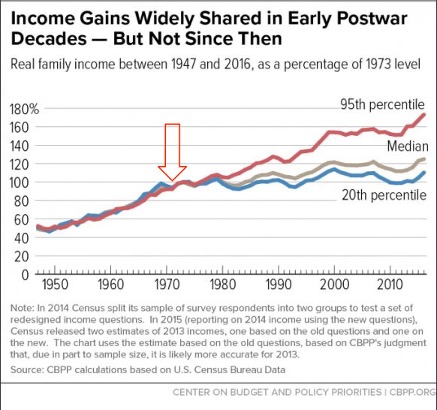 It was 50 years ago last night that President Richard Nixon broke into the nation’s No. 1 TV show to announce he was cutting the dollar’s last tie to gold. 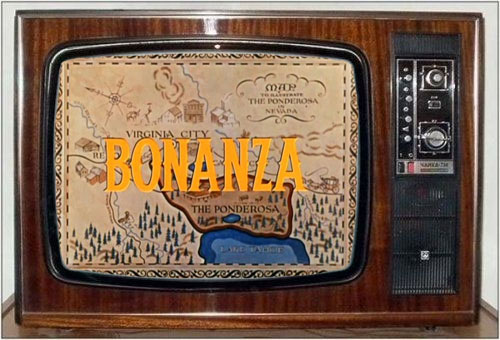 The short story: Between the Vietnam War and LBJ’s Great Society programs, the national debt was mounting quickly. Foreign governments — especially France — were losing confidence in the U.S. dollar. Under the terms of the 1944 Bretton Woods agreement, those governments were exercising their right to trade in dollars for gold.

“Nixon said the suspension of convertibility was ‘temporary,’” recalls our macro maven Jim Rickards with some lesser-known history.

“I spoke with two of the officials present at Camp David with Nixon the weekend of the announcement, Paul Volcker and Kenneth Dam. They both confirmed to me that the suspension was meant to be temporary.

“The plan was to have a new Bretton Woods-style conference, devalue the dollar against gold (and against other currencies such as the yen, the Deutsche mark and French francs) and then return to the gold standard at the new valuations.

“The first part happened — there was an international financial conference in Washington, D.C., in December 1971 — but the rest did not. While the world was waiting for the conference, countries moved to floating exchange rates without reference to gold.

“The Washington conference did devalue the dollar relative to gold (to $42.22 in stages), but there was never a return to a gold standard. We’ve been stuck with floating exchange rates ever since.”

“Ronald Reagan once told me that no nation has abandoned gold and remained great,” recalls retired Rep. Ron Paul (R-Texas).

It was Nixon closing the gold window that prompted Dr. Paul to make his first run for Congress in 1974.

“America’s experiment with fiat [currency] has led to an explosion of consumer, business and — especially — government debt,” Paul writes for The New York Sun. “It has also caused increasing economic inequality, a boom-bubble-bust business cycle and a continued erosion of the dollar’s value…

“Fifty years after Nixon closed the gold window, prices are heading toward 1970s-era increases. Yet the Fed cannot increase interest rates as long as the politicians keep creating billions of new debts.”

As long as the good doctor brings up Ronald Reagan and gold, we can’t resist retelling the following story — because it illustrates how the deep state works.

Reagan formed a U.S. Gold Commission early during his first term to investigate whether the United States should return to some sort of gold backing for the U.S. dollar.

In the end, the commission voted 15-2 against. Paul was one of the two dissenters.

During his second term, Reagan granted a one-on-one interview to the late columnist Robert Novak. From Novak’s 2007 autobiography…

“I asked Reagan: ‘What ever happened to the gold standard? I thought you supported it.’

“‘Well,’ the president began and then paused (a ploy he frequently used to collect his thoughts), ‘I still do support the gold standard, but —’ At that point, Reagan was interrupted by his chief of staff. ‘Now, Mr. President,’ said Don Regan, ‘we don’t want to get bogged down talking about the gold standard.’

“‘You see?’ the president said to me, with palms uplifted in mock futility. ‘They just won’t let me have my way.’”

Key point: It was Donald Regan — the Merrill Lynch veteran who was Treasury secretary during Reagan’s first term — who stacked the U.S. Gold Commission with supporters of fiat money.

Paul saw the long-term consequences of a fiat dollar from the get-go: “Scheming, speculation and sophisticated tax avoidance have replaced productive efforts, savings and planning for the future.”

Those words come from The Case for Gold, the “minority report” of the Gold Commission — published in 1982 by Paul and his fellow dissenter, the investment banker Lew Lehrman.

What kind of “scheming and speculation” did they have in mind?

Well, that gets us back to those floating exchange rates. “Trading in currencies can now be more rewarding to banks than the conventional business of brokering loans from savings,” they wrote.

“The futures and options market has turned into a giant gambling game. The new markets that have developed since the dollar lost its precise definition reflect the ingenuity of man. Now we see futures sold in currencies, betting on the monetary inflation of various governments.”

None of it would be happening if we still had sound money. There’s not much you can do about it… so you might as well try to make some profit off it and make up for your depreciating dollars.

And until this year, currency trading was the province of professionals — requiring a special trading account, and high-risk leveraged bets to make the big money.

What changed this year? The aforementioned Jim Rickards developed his one-of-a-kind COBRA system — where you can skim some of that $6.6 trillion in daily trading volume for yourself.

Using a plain-vanilla brokerage account, you can piggyback the pros… and potentially generate average gains of 160% every 45 days. Follow this link and Jim walks you through COBRA, step by step.

One more thought before we move on: There’s a symmetry, at once both beautiful and horrible, about the capture of Afghanistan’s capital by the Taliban 50 years to the day after Nixon’s fateful announcement.

Again, the costs of the Vietnam War contributed mightily to the abandonment of gold and the adoption of a fiat dollar.

By the late Reagan years, the historian Paul Kennedy was warning about the risks of “imperial overstretch.”

When the Soviet Union fell, it was a chance for America to once again be “a normal country in a normal time.”

But most of America’s power elite felt otherwise, and they sought to seize the “unipolar moment.”

They aimed to “kick the Vietnam syndrome once and for all” in the 1991 Gulf War — those were George H.W. Bush’s words — but to keep the shaky peace, American troops were garrisoned in Saudi Arabia.

Christian troops occupying the land of Islam’s two holiest cities? That was Osama bin Laden’s prime grievance when he decided to embark upon the 9/11 attacks to “bleed America to the point of bankruptcy.”

Per the Costs of War Project at Brown University, the “war on terror” has cost $6.4 trillion to date — more than the entire national debt on Sept. 11, 2001.

Staggering. Afghanistan wasn’t even where the plot was hatched — most of that took place in Hamburg, Germany, and Hollywood, Florida — but as our founding editor Addison Wiggin once observed, “The empire has a logic all its own. That logic will bring about events beyond your control.

“It is far better to understand those events and plan your life and your ‘portfolio’ accordingly… than to allow them to blindside you and your family.” (Again, we direct your attention to Jim Rickards’ presentation, here.)

To the markets, where it’s a backing-and-filling day for the major U.S. stock indexes.

And while the Nasdaq Composite is struggling to top its record levels of earlier this month, the Nasdaq-100 — a more concentrated index — had no trouble at all on Friday.

Meanwhile, “a U.S. dollar dive on Friday could be the start of an unwind,” says Alan — and another positive catalyst for stocks.

We have our first indication of the economy’s performance so far in August: Factory activity in New York state is still growing strongly, though not as much as expected, according to the Federal Reserve’s Empire State Manufacturing Index.

Unfinished earnings-season business: The giant institutional food supplier Sysco had no choice but to come clean about supply-chain snags in its recent earnings call.

Back on Aug. 5, we took note of scattered local news reports around the country that Sysco had suspended deliveries to some of its smaller restaurant customers.

CEO Kevin Hourican acknowledged his firm is having trouble getting enough pork and poultry to meet demand. But he’s promising to use his firm’s size as leverage with its suppliers. “We have significant scale and purchasing, which is an asset,” he said.

For once, we bring you a lemonade-stand story that does not involve heavy-handed law enforcement… 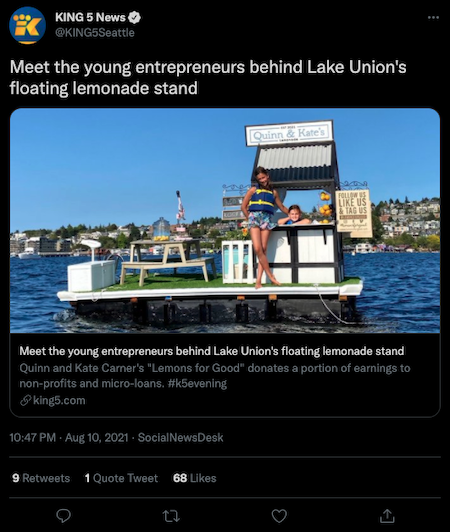 No, the novelty here is simply that we’re talking about a floating lemonade stand on Lake Union — the freshwater lake inside Seattle city limits.

Folks are getting accustomed to hearing 11-year-old Kate Carner calling out, “Come get your lemonade!” And once in a while, even her 8-year-old sister Quinn.

“We moved to a boathouse so we can’t really have a lemonade stand because there’s nowhere really to do it,” Quinn tells KING-TV. “So we decided to do a floating lemonade stand.”

Their dad, Ned, gave them a loan to launch the business; a third of the proceeds go to charity.

“Every time they take it out, they have to make a $25 microloan, and they’ve selected women in predominantly poor countries to help them start small businesses,” Ned tells the Seattle Refined website. “Every time we go out, we scroll through the website and pick an individual that they want to help start a business and pay it forward, and they have to keep doing that until they paid the loan that I paid them.”

And with no busybodies in sight demanding a permit? No boating-safety inspectors or something, either? In Seattle?

P.S. One more thing about Jim Rickards’ COBRA system. For a limited time, you can still access this revolutionary strategy — opening you up to currency-trading profits without the complexity and risk of the forex markets — at the charter-subscriber price. Details here.