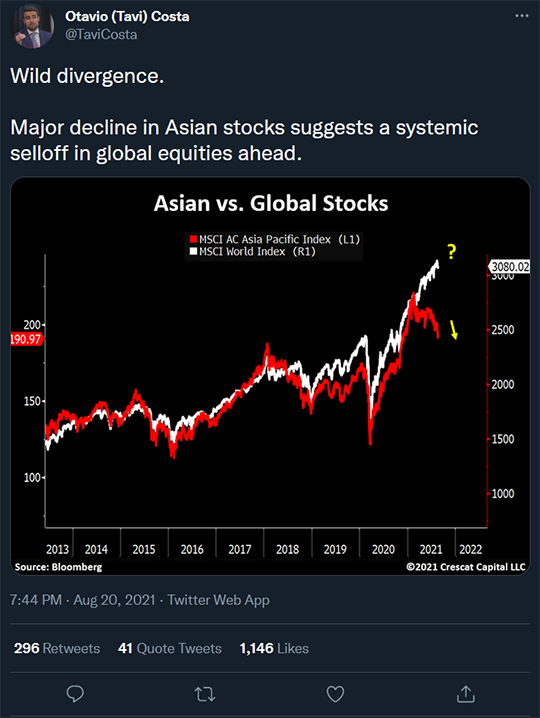 Interesting. Nor is that the only “wild divergence” we’re encountering…

The most recent spate of U.S. economic data is “missing expectations at the highest pace since the depths of the pandemic,” says the Financial Times.

“Several closely watched US economic measures published in recent weeks have come in well below Wall Street expectations, indicating the powerful economic growth from the depths of the COVID crisis may be losing steam.”

Citigroup publishes something it calls an “Economic Surprise Index.” Readings below zero indicate that incoming economic numbers are consistently registering worse than expected.

Behold America in the blue line, and the world’s 10 biggest economies in the red line… 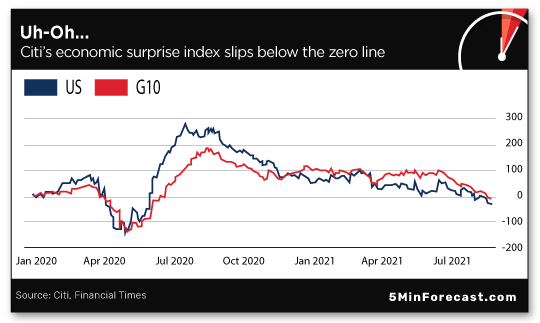 And that chart was issued before another ugly surprise this morning with the “flash PMI” numbers — a critical reading on the economy’s performance so far in August.

The overall figure slid sharply from 59.9 in July to 55.4 in August — lower than even the gloomiest guess among dozens of economists polled by Econoday.

Manufacturing slipped from 63.4 to 61.2. That too is a worse reading than anyone in the “expert consensus” was looking for.

Many more surprises like these and the stock market could easily fall out of bed. As noted here last week, we’ve been through an unusually long stretch without even a 5% pullback. Will you be ready?

Econoday puts its best spin on the disappointment, but it’s a disappointment all the same: “A mid-50s score is still very solid and arguably just right: neither overheated nor overcooled…

“But such a reading in the early part of the recovery may be less than ideal,” the summary continues.

Worse, the survey respondents “are also reporting record pass-through of these costs to their customers,” says Econoday — “a detail that does not fit with the Federal Reserve’s transitory inflation thesis.”

Yup. And the media’s buildup to a big speech by Fed chair Jerome Powell this coming Friday is already out of hand. It’s only Monday, fer cryin’ out loud.

Barron’s, for instance: “Investors will closely watch the central bank chief’s words for clues on when and how the Fed intends to begin tapering asset purchases.”

Gonna be real interesting to see how Powell will try to justify winding down those bond purchases — especially in light of events in the last 72 hours.

After we hit the “send” button on Friday’s 5, word came down that for a second year running, the annual conference where Powell will deliver his speech will be held online only — not in its usual venue of Jackson Hole, Wyoming. 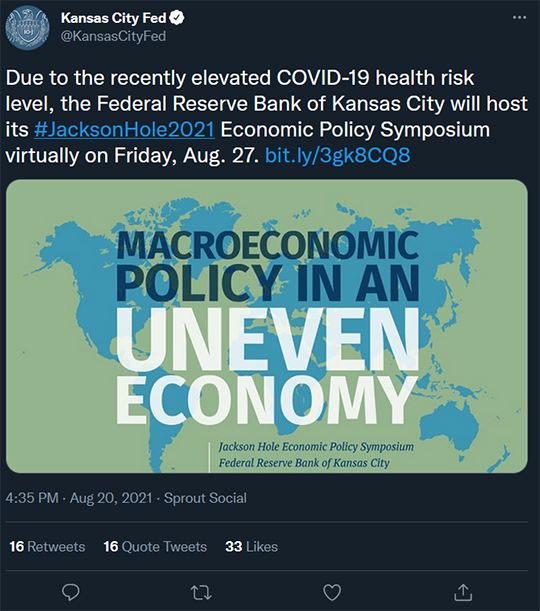 Yeah, good luck saying “It’s time to dial back on our emergency monetary measures” when these people — every one of them fully vaccinated, we presume — can’t even bring themselves to meet in person.

OK, you get the idea: There’s any number of factors that could knock down the market a peg or three — a Powell blunder, another nasty surprise in the economic numbers or just the U.S. market tumbling in sympathy with Asian markets.

Since last spring, we’ve been pounding the table for a strategy our trading-floor veteran Alan Knuckman calls “disaster insurance.”

With only a small chunk of your portfolio — as little as 1% — you hedge yourself against a sudden market shock.

Worst case, the trade acts like an actual insurance premium: Disaster doesn’t occur and you’re out the money that you put up.

But “best case,” the market does fall out of bed and the “insurance” policy pays off in a way that more than covers the losses elsewhere in your portfolio. In an extreme case, you might even make 40 times your money.

Alan has put $10,000 of his own money on this sort of trade — which is remarkable considering he’s often been labeled a “perma-bull.”

In the meantime, though, the major U.S. stock indexes are powering higher.

Among the big stock movers this morning is Pfizer — up nearly 2.5% after full FDA approval of its corona-vaccine.

No more “Emergency Use Authorization” — the Pfizer shot has complete FDA blessing now, even though the trials still won’t be done until early next year.

The approval “will pave the way for new vaccine mandates,” says The New York Times — although as of a few days ago, a mandate did not apply to Pfizer’s own employees. Weekly testing is still an option in lieu of getting the jab… 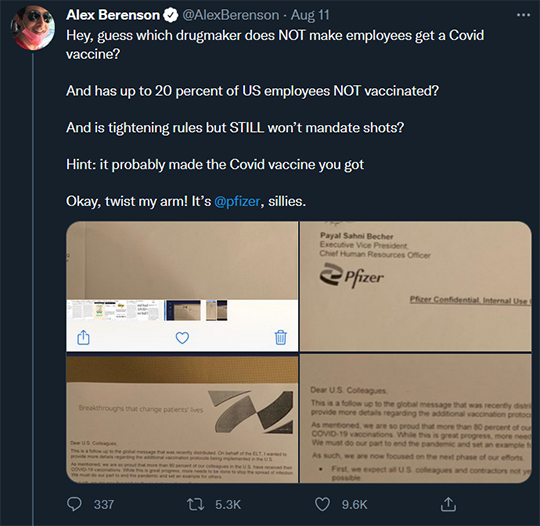 Here’s what we’re wondering, and what we’ve not seen anyone in the media address: Can Pfizer now be sued in the event of an adverse reaction?

That’s not been the case so far. From a CNBC story last December…

In February [2020], Health and Human Services Secretary Alex Azar invoked the Public Readiness and Emergency Preparedness Act. The 2005 law empowers the HHS secretary to provide legal protection to companies making or distributing critical medical supplies, such as vaccines and treatments, unless there’s “willful misconduct” by the company. The protection lasts until 2024.

That means that for the next four years, these companies “cannot be sued for money damages in court” over injuries related to the administration or use of products to treat or protect against COVID.

Either it’s the biggest story to rock the gold world in years or there’s a huge misunderstanding.

For nearly as long as we’ve been publishing The 5 — over 14 years — we’ve kept an eye on China’s official gold reserves. A large gold reserve translates to “a seat at the table” when leaders of nation-states set global economic policy.

For the most part, it’s been China’s MO to update its gold-reserve figures very rarely — once every few years — even though no one doubts the Chinese central bank has been stacking steadily month after month. That’s how you end up with a weird chart like this one… 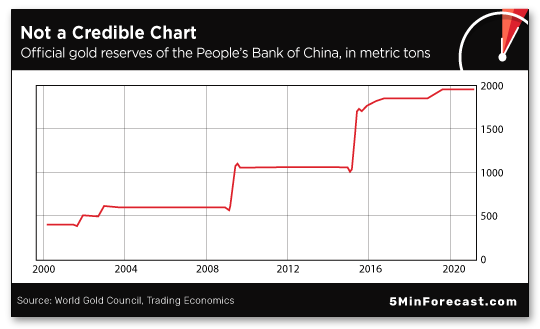 Right, we’re really supposed to believe the People’s Bank of China hasn’t added any gold to its stash since mid-2019?

So that’s what makes a report from China’s state-run Xinhua news agency so curious.

We reproduce the lead verbatim: “China’s gold reserves have grown every year for 15 consecutive years, reaching 14,727.16 tons by 2020, according to a yearbook issued by China Gold Association (CGA).”

No, there’s nothing in the story to address the discrepancy. The rest of the article discusses the country’s gold production, gold trading volume and so on.

Nor do we find any other media outlet taking up the matter; well, there’s a gold dealer in Canada that has a “news” service that hastily rewrote the Xinhua story without attribution. Useless.

We can only surmise that the figure of nearly 15,000 tons includes the Chinese central bank’s stash along with some other governmental or quasi-governmental reserve that’s never been included in the official total.

One thing’s for sure: The real total is more than 1,948.31 metric tons. A few years ago, our Jim Rickards reckoned that as a percentage of its economy, China had already achieved a gold stash on par with America’s — about 2.7% of GDP, or 4,800 metric tons at that time.

But it’s all an educated guess. As we’ve said all along, China will come clean about its gold stash at a time and place of its choosing.

Supply-chain snag of the day, and this one’s serious…

Carnival Cruise Line “has temporarily moved to an every-other-day bacon schedule fleetwide, citing supply issues,” per a report from the Fox affiliate in Orlando.

The story cites a Facebook video from John Heald, the company’s “brand ambassador”…

[Pardon us while we gag]

… in which he says, “We purchase thousands and thousands of pieces of bacon every week, and our suppliers — the people that supply us and the cruise industry – are having some challenges sourcing bacon for our ships at the moment. Every other day, the bacon is going to go on a ‘bacation.’”

Ham and sausage are not affected, and the company says it expects the staggered bacon schedule to go on for only one week.

Reading between the lines, we’re guessing refunds for bacon-deprived passengers are not in the works…

“As a lifelong do-nothing Democrat and a loyal reader of The 5,” writes a reader, “I would appreciate it if you would stop using your publication to bash those of us who believe Trump was, and is, a far bigger threat to our country than any Democrat.

“Your conservative financial commentary is appreciated, just quit slandering half of your readers in the process.”

Really, what brings on your complaint? We’re skimming over the last week’s worth of issues and we’re flummoxed. Never mind our general “antipartisan” stance, which also elicits outbursts of rage from MAGA types now and then.

Seriously, lay it on us. What did we say to offend? Not that we’re going to take it back. We just want to keep the mailbag lively here in the summer doldrums, heh…

P.S. Even though they’re only making news within the last couple of weeks, readers of The Profit Wire made money off of Pfizer booster shots more than four months ago.

For real. We recommended PFE call options on March 16. Then on April 14, CEO Albert Bourla dropped the news that patients would likely need a third dose of the vaccine, along with regular boosters after that. More shots, more revenue.

The next day, readers booked a 50% gain on half of their position. Then in early May, they booked a 100% gain on the rest of the position when PFE issued its quarterly numbers, beating Wall Street estimates.

That’s the power of The Profit Wire’s proprietary QIT-4 indicator — capable of sniffing out market-moving news before it happens, based on the activity of connected insiders in the derivatives market.

The Profit Wire is also where you can get the downside protection of our “disaster insurance” strategy — which, as we said off the top of today’s 5, is more timely now than ever.

We’re keeping this premium service available to new readers for only a few more hours. Check out what it’s all about right here.