“Possession is nine-tenths of the law.”

The origins of this saying are rather murky. When researching it a few years ago, we settled on the following attribution — “from a Scottish expression.”

The point is that your claim of ownership to an object is easier to enforce if the object is actually in your possession.

Otherwise you face — to use a financial term that came into vogue during the Panic of 2008 — “counterparty risk.”

If you’re a longtime reader, you know we’ve invoked this principle regularly when talking about precious metals.

For every ounce of physical gold out there, there are at least 100 “paper ounces” in the form of futures and other gold derivatives.

As the lockdowns took effect worldwide last year and markets went haywire, the price of real gold ran away from the paper price quoted in New York, London and Hong Kong. People who wanted the real thing couldn’t get it — or if they could, they had to pay a super-steep premium.

Folks who already had the real thing in their possession, on the other hand, were feeling secure — maybe even smug.

Even now, premiums over the paper price remain elevated; paper gold trades for around $1,800 as we write this morning, but you’ll pay about $1,900 for a U.S. Gold Eagle from our friends at Hard Assets Alliance — and they charge among the lowest premiums in the industry.

The same principle applies to cryptocurrency.

“Even if you bought Bitcoin, you may not actually own it — at least not if you used several of the biggest cryptocurrency exchanges out there today,” says Jonas Elmerraji, a veteran of our research team who’s devoting much of his energy these days to crypto.

“Not all exchanges are equal, it turns out. And some of the most popular places to buy Bitcoin may actually be the worst!

“There are two important considerations when it comes to buying Bitcoin or other cryptocurrencies,” Jonas explains: “transaction costs and custody.

“Transaction costs should be familiar to stock investors — they’re the commissions you pay to buy or sell. But let’s talk about custody for a second…

“Custody refers to who holds onto your Bitcoin. If you buy Bitcoin on an exchange, that exchange typically hangs onto the actual cryptographic keys for you by default. Often, they pool customer coins into wallets managed by the exchange. This is convenient, but it can also pose a security risk, since a hacker (or malicious employee) who compromises that wallet could have access to all customers’ coins.”

“You can also transfer your bitcoins to your own digital wallet,” Jonas goes on, “or even to a ‘cold storage’ wallet like the Ledger Nano:

One of many options for possession of your crypto…

“Point is, you control where your bitcoins are stored.”

If only it were that simple: “Not all exchanges let you control where your bitcoins are stored,” says Jonas.

“For example, two of the biggest fintech companies that have popularized Bitcoin, PayPal and Robinhood, don’t currently let you transfer your cryptocurrencies off their platforms. And there are other Bitcoin trading venues that work the same way.

“That means, for all intents and purposes, you don’t really ‘own’ it. It’s trapped unless you sell it.

(Both companies say they’ll allow for third-party transfers soon — but the timeline is unclear.)”

“Unlike with stocks, it can be worthwhile to pay a little more in fees to go with a regulated exchange that spends resources on security infrastructure, especially if you don’t want to deal with the hassle of taking custody of your own cryptocurrencies.

“But if you want to actually use your bitcoins for transactions at some point, you may incur some hefty transaction fees to convert your holdings to dollars on those platforms. Until they get around to allowing third-party wallet transfers anyway.”

We’ll take Jonas’ guidance a step further, mindful of that old proverb with which we began today: If you’re doing anything more than dabbling in cryptocurrency — that is, if crypto makes up more than 1% of your portfolio — you need to at least start exploring crypto wallets.

Yes, it’s more work. But it’s work you need to do to make sure you keep what’s yours.

[Ed. note: With considerations just like this one in mind, our resident crypto evangelist James Altucher is hard at work on a new “crypto bible” for folks who are just starting to explore the wild-and-wooly cryptocurrency world. Watch this space.]

To the markets, where it appears Federal Reserve chief Jerome Powell — against all odds — successfully threaded the needle.

A half-hour after the market opened, the Fed released the text of his annual “Jackson Hole speech” — which he did not deliver in Wyoming because for the second year in a row, the event was moved online-only.

Powell affirmed the Fed will likely start “tapering” its $120 billion a month in bond purchases before year-end. Look for a precise timetable at the Fed’s mid-September meeting.

But that’s as far as monetary tightening goes. Raising short-term interest rates from the zero bound? Forget it: “With substantial slack remaining in the labor market and the pandemic continuing, such a mistake could be particularly harmful,” he said — doubling down on his assertion that the current uptick in inflation will prove to be “transitory.”

Heh. Ninety minutes before his speech, the Commerce Department released the Fed’s preferred measure of inflation, known as “core PCE.”

It’s running 3.6% year over year — same as it was the month before. Perhaps it’s leveling off. You certainly can’t say it’s in retreat. 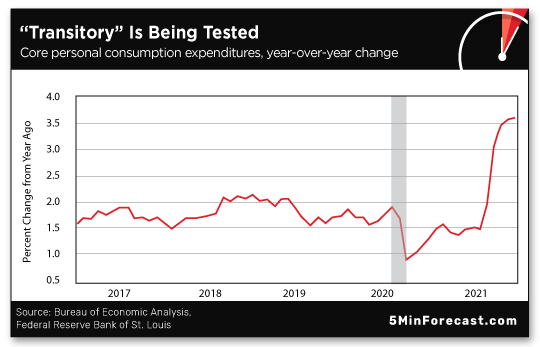 The usually deadpan summary from the research firm Econoday was strikingly cynical: “These readings do not suggest that inflation is letting up for consumers as of July and will call into question the Fed’s interpretation of the underlying causes as ‘transitory.’”

But as we said, Powell managed to thread the needle and avoid setting off a renewed “taper tantrum” on Wall Street.

After yesterday’s pullback, the S&P 500 is back in record territory. Ditto for the Nasdaq, now approaching 15,100. The Dow is also in the green, but it’s pulling up the rear: At 35,435, it still has a couple hundred points to make up before touching its mid-August record.

Gold is also rallying and, barring any surprises, will end the week over $1,800. Silver is within a dime of $24 again.

For the “economically sensitive” commodities, it’s been a heckuva rebound this week. Crude is up another buck today to $68.61 a barrel, while copper is at $4.26 a pound.

OK, this might be reason to wonder if the stock market’s looking toppy.

From the Financial Times: “Investors in the U.S. have started to dial back their use of leverage for the first time since financial markets were rattled by the coronavirus crisis last year, removing some of the borrowed money that has since fueled a rally in stocks.”

As we’ve said for years now, there’s never a shortage of internet screamers eager to point out whenever MARGIN DEBT IS AT ALL-TIME HIGHS!! as if that’s a sure sign of impending doom.

As we’ve also said for years now, the time to actually worry is when margin debt starts declining from all-time highs.

Uhh, per figures from the Financial Industry Regulatory Authority, we’re there now… 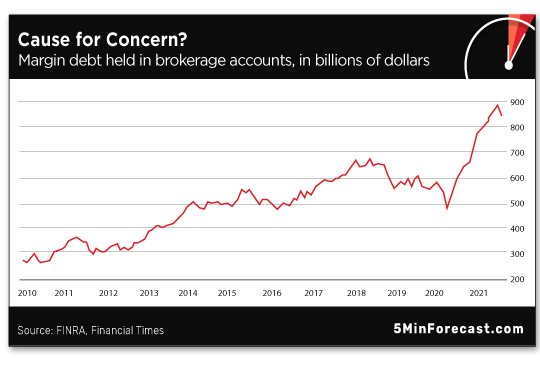 We’ll caution, however, that these figures don’t account for who’s behind this decline — retail investors or institutions. For whatever it’s worth, Interactive Brokers says its clients’ margin debt fell 2% in July, while margin at Schwab still inched higher.

Embarrassment of the week… 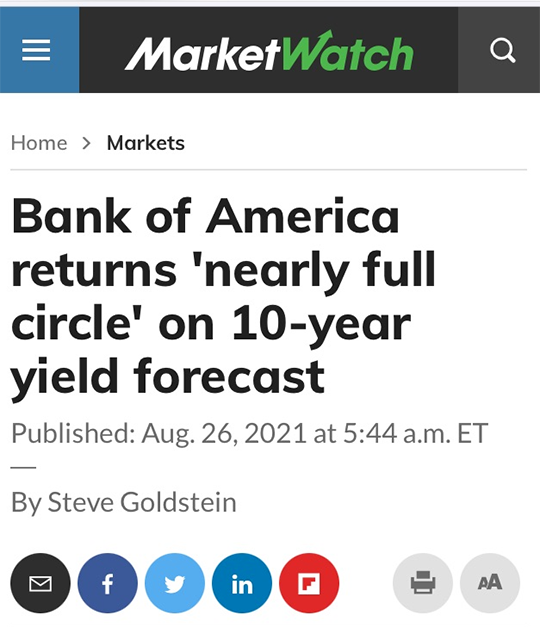 Yesterday, Bank of America lowered its year-end outlook for the yield on a 10-year U.S. Treasury note. And in the most humiliating fashion.

“We came into 2021,” BofA’s analysts write, “with a 10-year year-end target of 1.5% but subsequently revised higher to eventually above 2% after the Democratic clean sweep, vaccine progress and sharp upward revision of economic expectations from our U.S. economists.

“We now return nearly full circle. We are forced to acknowledge that the Delta variant has caused a considerable reassessment of the economic outlook as priced in by rates markets globally.”

Love it. Last spring, when the 10-year yield had raced up to 1.75% and the mainstream was SO CERTAIN it was going only higher, our team said otherwise.

Jim Rickards approached the question from a slowing-economy viewpoint, while Alan Knuckman was watching the action in the eurodollar market. But they both came to the same conclusion: Rates in fact had nowhere to go but down.

Checking our screens this morning, the 10-year is at 1.32% — about the same as it was six months ago.

To the mailbag, and some reactions to our revisit of The Alpha Strategy, the late John Pugsley’s “lost” inflation survival guide of 40 years ago…

“While Mr. Pugsley’s basic advice is sound, everything on his list is a brand-name product, and nothing is said about accumulating your trove gradually by buying only when items are on sale. That can of beans that’s priced $1.39 at the supermarket today will go for 50 cents during the ‘Fall Harvest Case Special’ a month or two down the road. And who needs brand-name paper towels for 99% of the tasks you use paper towels for?

“As far as razors go, I’ve got a lifetime supply of single- through triple-blade disposables that I’ve acquired from drugstore sales and the Dollar Tree over the past decade. I’ll have to will them to my sons.

“If you want to store some meat or poultry without running a freezer, 12-ounce cans of boneless white meat of chicken or Danish ham go for about 3 bucks apiece on sale and have manufacturer-dated shelf lives of three–five years. Corned beef, tuna, salmon, etc., are other options in the canned protein department.

“I would, however, advise against buying most items of clothing with the intention of wearing them years in the future. The problem is not with shelf life, but with your life. There’s no way I could have worn at 40 (after adding almost 20 pounds to my frame) what I wore at 30. (My handkerchiefs and socks still fit OK.)”

On Pugsley’s stated 10-year shelf life for most liquors, a reader weighs in: “I have about a liter of 15-year-old Scotch in my liquor cabinet.

“That’s well past 10 years. Perhaps I should invite some good friends over to dispose of it?

“Thanks for your good work!”

The 5: Crazy, right? When we published the original version of our write-up in October 2013, used-book sites were littered with copies for a penny plus shipping.