When The 5 last touched on the subject in May, Jim Rickards extolled the Russian Central Bank’s genius. 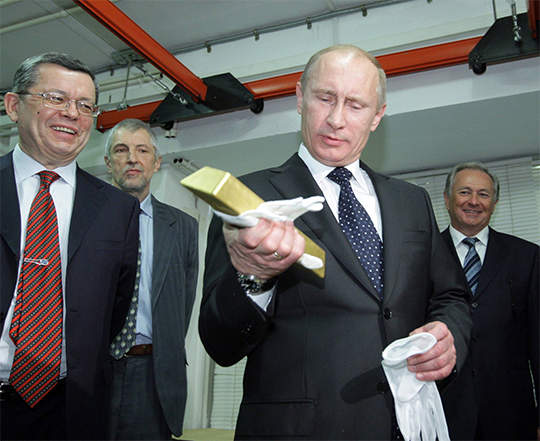 Putin curls 27.4 pounds of gold, and leaves no fingerprints. (Thanks to his KGB training?)

The Russian Central bank didn’t amass gold with any chest-thumping. Rather, Jim says: “They did it with slow, steady and predictable purchases on a monthly basis.

“That more than decade-long buying program put Russia in the position where gold now constitutes 21.7% of Russia’s total reserves,” he says.

The outcome? “Russia has the highest gold-to-GDP ratio of any major economy and has the fifth-largest gold hoard of any country in the world, after the U.S., Germany, Italy and France.”

Jim notes, however: “This acquisition program hit a wall in April 2020. Russia was a net seller of 0.4 metric tonnes that month… 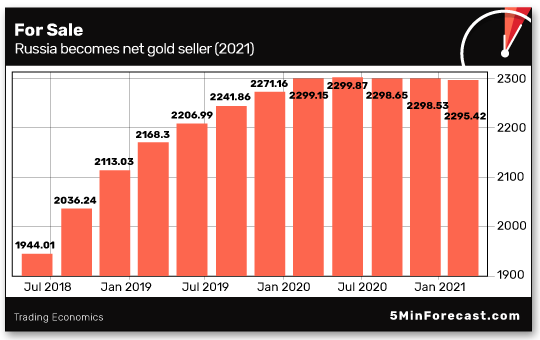 Overall, Jim says: “Russia has been a net seller of almost 7 metric tonnes of gold in the past 15 months including two months as a buyer, seven months as a seller and six months with no activity.

“A superficial analysis of this pattern,” he continues, “might lead one to conclude that Russia has cooled off on gold or is discounting its prospects and quietly dumping its position.

“Nothing could be further from the truth,” says Jim. “Russia had a specific goal in mind, which was to bring gold to approximately 20% of total reserves,” he says.

“In short, once Russia reached the 20% of reserves level in terms of gold, it did not need more gold and it curtailed purchases accordingly.”

Jim points out: “Russia is leading the way both in terms of maintaining a substantial reserve position in gold and astutely managing that position as a percentage of total reserves.

“From there, the head of Russia’s central bank, Elvira Nabiullina, simply has to buy or sell in small increments to manage the ratio.”

And the central bank can stay nimble: “Russia is the second-largest gold producer in the world, after China and ahead of Australia, the U.S. and Canada,” Jim says. “If Russia were to decide it needed more gold in its reserve position, it could easily requisition gold from domestic producers even if it were shut out of foreign markets.”

Jim’s takeaway? “Don’t believe the official narrative that gold is not money,” he says. “None of these moves by Russia… would be taking place unless gold were considered an important form of money by the most powerful nations in the world.

“Don’t be left behind,” Jim urges. “When gold skyrockets, you won’t be able to find it at any price. The time to build your target allocation is now.”

That’s why we strongly recommend you own physical gold and silver… especially as the dollar loses its value. We also recommend you get yours from Hard Assets Alliance.

They ONLY deal in high-quality bullion; plus, they offer automatic gold and silver savings accounts as well as IRA accounts.

If you don’t know how to get started, let HAA help you… Open an account here with the Hard Assets Alliance today.

Reminder: Our firm owns a share of Hard Assets Alliance — so you can assume we’ll take a small cut of any fees… which, by the way, are among the lowest in the business. .]

“It’s been a mixed start to the short trading week,” says our market analyst Greg Guenthner. “Maybe all the big-time money managers extended their beach stays?”

On Tuesday, Greg notes: “Fewer than 30% of stocks finished in the green.

“Industrials took a hit and the Dow swung to a loss of almost 0.8%. The S&P was off by about 0.35%. But the Nasdaq ended the day in the green,” he says, “thanks to strong action from some of its biggest names: TSLA, FB, NFLX and AAPL.”

It’s a mixed bag for commodities: Oil’s rallied 1.5% to $69.38 for a barrel of WTI. But precious metals are languishing — gold and silver sit at just under $1,800 and barely above $24 respectively.

“Crypto’s provided more than enough excitement to make up for the dull stock market,” Greg says.

“Yesterday, after getting a little wobbly in the morning, Bitcoin and Ethereum flash-crashed near midday,” he says. “Ethereum briefly tagged $3,000, while Bitcoin dropped almost $10,000 before eager buyers stepped in to gobble up the dip.

“I think it’s safe to say that mini-crashes and rallies are all part of the crypto game,” Greg concludes.

Or is crypto gamed? 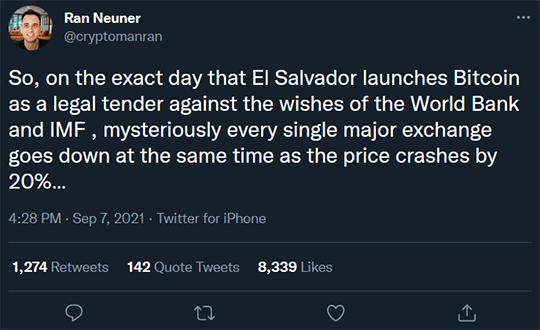 It’s hard to make heads or tails of El Salvador’s Bitcoin adoption… plus crypto’s flash crash… plus outages at major crypto exchanges Binance, Kraken and Coinbase… all on the same day.

But our cryptocurrency expert James Altucher and his team are working on something to help everyday investors stay in the loop on the latest trends in the crypto space. Plus, help you buy, sell and store crypto. Safely.

James is gearing up to share his big-picture outlook and predictions… For now, he believes Ethereum has a lot of upside, and of course, he still thinks Bitcoin isn’t going anywhere.

“Manufacturers who use resins for everything from plastic straws to industrial pipes, car parts and heart valves are facing higher prices and increased supply chain hiccups that could persist for years,” the article says. “And the pandemic is only partly to blame.

“One of the biggest drivers of spiking resin prices this year has been the winter storm that essentially shut down Texas for part of February.”

It took resin manufacturers in Texas and Louisiana several weeks to get back to work; even still resin producers aren’t completely operational. “As a result, demand for resins is far outstripping supplies, leaving manufacturers scrambling for polyethylene, PVC, nylon, epoxy and more.

“Because resins are a byproduct of petroleum refining processes, anything that causes a decline in refining activity or the demand for fuel can set off a domino effect that makes resins harder and more expensive to find.

“As it stands now, more than 60% of manufacturers are reporting resin shortages, according to survey data from AlixPartners,” Supply Chain Dive reports. “It expects the problem could persist for up to three years until production capacity catches up with demand.”

“The posh people’s store is joining the war on plastic and will be axing its iconic green-and-gold carriers,” says the U.K.’s dishy Mirror. (Do I detect a slight Cockney accent? Heh.)

“The upmarket West London store will take 4 million plastic bags a year out of landfill as they are replaced with 100% recyclable ones.” 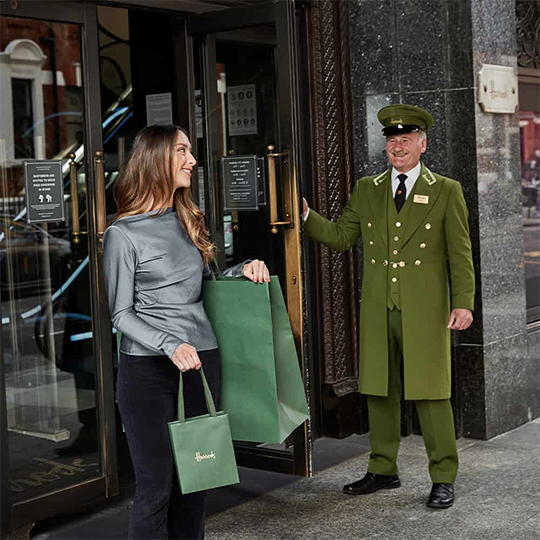 Courtesy: Harrods
Perfect for the conscientious “ladies who lunch”…

“As proud as we are to see customers leaving our store with the iconic Harrods green bag,” says Harrods’ managing director Michael Ward, “going forward we want to see as few of them as possible.”

But if you want a Harrods shopping bag of your own, you can buy one at — appropriately enough — online marketplace Poshmark. On sale now for just $25 (plus S&H).

Which reminds me of one of my favorite British sitcoms: Keeping up Appearances…

“Just wondering if The 5 is keeping tabs on the looming debt ceiling drama in Congress.

“What happens if the Treasury runs out of T-bills until the can gets kicked down the road… again? This hasn’t been in the mainstream press yet, but the hour is at hand.

“Batten down the hatches and buckle up! Not exactly a black swan for those paying attention.”

The 5: The debt ceiling has been on our radar since July (but thanks for keeping us honest).

And while we haven’t forgotten about it, it’s just all mixed up now with infrastructure, a separate $3.5 trillion spendapalooza and the Sept. 30 end of the fiscal year. Sheesh…

We’ll have more of The 5 tomorrow. Until then, take care!

P.S. Congratulations to readers of The Profit Wire — who pocketed 100% gains after only 22 days this morning on Baxter International, the giant medical-device manufacturer.

Our proprietary QIT-4 indicator accurately sniffed out BAX’s takeover of Hill-Rom Holdings — at a time the media were certain the deal was off.

The Profit Wire is currently closed to new subscribers, but we’ll be opening it up again in the coming weeks. Stay tuned…