Sept. 11, 2001 — the day Osama bin Laden pulled off the most brilliant leveraged bet in history.

Welcome to a uniquely 5-ish commemoration of the 9/11 attacks, a day ahead of the 20th anniversary.

We leave it to others to recount the day’s events and remember the dead. Here, we take on our usual money-and-markets angle… and weep for lost liberties.

We begin by recalling the words attributed to bin Laden in a speech from 2004: “We, alongside the mujahideen, bled Russia for 10 years until it went bankrupt and was forced to withdraw [from Afghanistan] in defeat… So we are continuing this policy in bleeding America to the point of bankruptcy.”

Mission accomplished — for bin Laden. We’ve recounted the numbers before, but they’re worth a revisit.

The final report of the 9/11 Commission estimated al-Qaida spent about $500,000 to carry out its mission.

As noted here last week, the Costs of War Project at Brown University has updated its running total of the forever wars’ price tag: $8.043 trillion, including veterans’ health care and interest on the wars’ share of the national debt.

The return generated by the “defense” industry isn’t quite as impressive… but it’s still eye-watering.

Per figures from the Center for Responsive Politics, the Big Five military contractors — Lockheed Martin, Boeing, Northrop Grumman, Raytheon and General Dynamics — spent over $1.1 billion on lobbying between 2001–21.

A substantial sum, yes, but look at the payoff: According to Stephen Semler, co-founder of the Security Policy Reform Institute, Congress awarded $2.02 trillion to those five companies over the last 20 years. 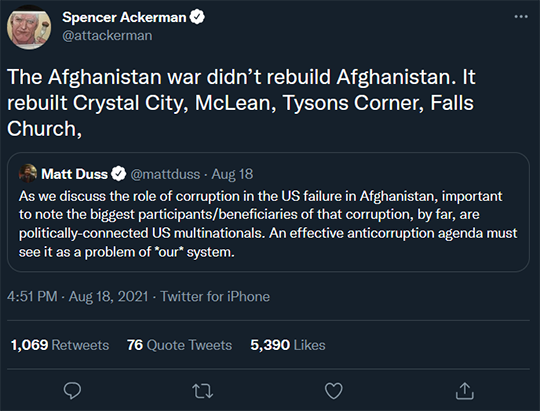 Sept. 11, 2001, was also the day many conservatives abandoned their suspicions of Big Government.

Despite the epic intelligence failures in the weeks before the attacks, conservatives suddenly found a new faith in lumbering government bureaucracies. Indeed, they couldn’t wait to create more of them.

“At the time of the 9/11 attacks,” journalist James Bovard recalls this week for the Mises Institute, “I had been bashing government policies for 20 years. Conservatives relished my battering of the Clinton administration in books such as Feeling Your Pain.”

But then Bovard cast an equally jaundiced eye toward the Bush administration in volumes like Terrorism and Tyranny and The Bush Betrayal. “The Patriot Act,” he wrote in the former volume, “treats every citizen like a suspected terrorist and every federal agent like a proven angel.”

Conservatives didn’t want to hear it. On one book tour after another, “I was chagrined to see folks more fearful of alleged invisible Muslim perils than of rampaging federal agencies.”

And so began an ugly taking of sides: “Remember how Republicans in the Bush era talked about blue-state enemies?” journalist Matt Taibbi writes at his Substack site. “Their conventional wisdom was that liberals equated with terrorists, liberalism was a ‘mental disorder,’ liberalism was ‘treason.’ Their rhetoric did not include a vision for the other half of America outside of conversion or expulsion.

“Plenty of this is still going on, but the updated version is prevalent now among Democrats,” Taibbi continues, “who are trying to make a strategy of absolute non-engagement stick with additional tools like platform censorship and domestic surveillance.”

The federal government has brought sufficient pressure to bear on the social media giants that across large swaths of the internet the First Amendment has been effectively gutted.

And when it comes to surveillance? We’re not sure where it all ends, but we got a hint from NBC Nightly News on Aug. 13, 2021. This screengrab summarizes a pre-9/11 anniversary alert from the Department of Homeland Security — a rampaging federal agency that we’ll remind you did not exist before 9/11… 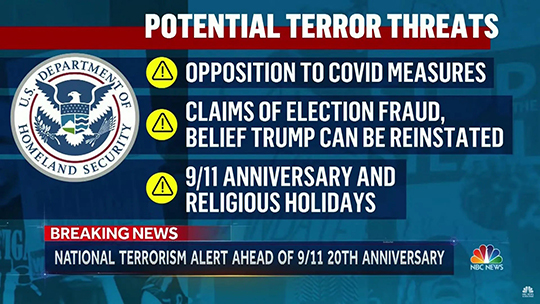 But really, it wasn’t 9/11 where conservatives lost their way. You have to go back to Ronald Reagan.

Within every Reagan speech… throughout every Reagan policy paper… behind every carefully choreographed Reagan photo op… there was an underlying assumption.

It went like this: The American government can have a giant military-industrial complex wielding its might around the globe… but the American people can still have individual liberty and limited government here at home.

The Founders would have thought Reagan’s construct was nuts.

We come back once more to our favorite quotation from the Founders: James Madison, 1795…

“Of all the enemies to public liberty war is, perhaps, the most to be dreaded, because it comprises and develops the germ of every other.

“War is the parent of armies; from these proceed debts and taxes; and armies, and debts, and taxes are the known instruments for bringing the many under the domination of the few… No nation could preserve its freedom in the midst of continual warfare.” [Emphasis ours.]

Nor, for that matter, in the midst of continual mobilization for war — which has been the American way of life since passage of the National Security Act of 1947.

The conservatives of those early Cold War years also would have thought Reagan’s construct was nuts.

Conservatives back then disagreed about the wisdom of pursuing the Cold War — but none of them believed it possible to wage a Cold War abroad while still living as a free people at home.

The “Old Right” faction that fought valiantly against FDR and the New Deal shared the Founders’ deep suspicion of “standing armies” — professional militaries maintained in peacetime. With World War II won, they said it was time to demobilize — as America had done after all its previous wars.

“Even if it were desirable, America is not strong enough to police the world by military force. If that attempt is made, the blessings of liberty will be replaced by coercion and tyranny at home.

“Our Christian ideals cannot be exported to other lands by dollars and guns… We cannot practice might and force abroad and retain freedom at home. We cannot talk world cooperation and practice power politics.” [Emphasis ours.]

Wise words those were, 74 years ago. But the Old Right was fighting a losing battle. The “New Right” threw in its lot with the burgeoning deep state.

They too recognized the impossibility of waging the Cold War overseas while holding onto freedom stateside. But in their worldview, there was no choice: Our founding values would have to take a back seat to militarism for the duration of the conflict with the Soviet Union.

Conservative icon William F. Buckley Jr. stated the case in Commonweal in early 1952: “We have got to accept Big Government for the duration — for neither an offensive nor a defensive war can be waged, given our present government skills, except through the instrument of a totalitarian bureaucracy within our shores.”

Thus, he went on, we must endure “large armies and air forces, atomic energy, central intelligence, war production boards and the attendant centralization of power in Washington — even with Truman at the reins of it all.”

As it happens, Buckley wrote that article during a two-year stint on the CIA’s payroll. Conflict of interest much?

But when the Berlin Wall fell and the Cold War was over… well, it’s not as if folks in the military-industrial complex were going to pat themselves on the back for a job well done and go find real jobs that didn’t sponge off the taxpayer.

Only a few lonely voices in the Establishment said America had best return to being “A Normal Country in a Normal Time” — the title of an article in The National Interest by Jeane Kirkpatrick, Reagan’s U.N. ambassador.

“The end of the Cold War frees time, attention and resources to American ends,” she wrote in 1990.

“The United States performed heroically in a time when heroism was required, altruistically during the long years when freedom was endangered. The time when America should bear such unusual burdens is past. With the return of ‘normal’ times, we can again become a normal nation.

“A good society is defined not by its foreign policy but by its internal qualities… Foreign policy becomes a major aspect of a society only if its government is expansionist, imperial, aggressive or when it is threatened by aggression. One of the most important consequences of the half century of war and Cold War has been to give foreign affairs an unnatural importance.”

Too late: Facing no threat of aggression, the United States nonetheless embarked on the Gulf War in 1991 — an act that ultimately set the stage for 9/11 a decade later.

Recall that once the war was over, “containing” Iraq’s Saddam Hussein for the rest of the 1990s entailed a large detachment of U.S. troops in Saudi Arabia.

Christian soldiers garrisoned on Muslim soil, indeed in the country that’s home to Islam’s two holiest cities: The presence of “Crusaders” was bin Laden’s prime grievance with Washington, D.C. — and his chief motive to “bleed America to the point of bankruptcy.”

But the costs of permanent mobilization for war were mounting long before 9/11.

In 1953, eight years before his famous warning about “the acquisition of unwarranted influence… by the military-industrial complex,” President Dwight Eisenhower delivered a startling cost-benefit analysis in his “Cross of Iron” speech.

“Every gun that is made, every warship launched, every rocket fired signifies, in the final sense, a theft from those who hunger and are not fed, those who are cold and are not clothed.”

That wasn’t a plea for welfare-state socialism. It’s basic economics: Every tax dollar that’s extracted from the productive economy for the military is a dollar you and I can’t spend improving our lives. In that regard, it’s like any other form of government spending.

Ike even ran the numbers in that speech: “The cost of one modern heavy bomber is this: a modern brick school in more than 30 cities. It is two electric power plants, each serving a town of 60,000 population. It is two fine, fully equipped hospitals. It is some 50 miles of concrete pavement. We pay for a single fighter plane with a half million bushels of wheat. We pay for a single destroyer with new homes that could have housed more than 8,000 people.”

Unless you’re pushing 100 years of age, no American reading this missive today has an adult memory of what it was like to live in “a normal country in a normal time.”

We passed from republic to empire — an Empire of Debt, as Bill Bonner and The 5’s founding editor Addison Wiggin titled their 2006 book.

Nor is the prospect of normal anywhere in sight. Even when deep-state types write earnest Op-Eds about how, yes, it’s finally time to disengage from the Middle East… they justify it by saying it’s time to pivot to China.

Always an enemy somewhere. The sitting president says, “We’re in a competition with China and other countries to win the 21st century.”

Whatever the hell that’s supposed to mean. We’ll find out soon enough, right?