“The land mines for the market are growing,” says an article at CNBC under the gloom-and-doom headline “The Stock Market is Undergoing a Slow-Motion Deterioration.”

“For the last several months,” says Sam Stovall of CFRA Research, “most stocks have declined more frequently than they have advanced — evidence of a weakening market condition.” 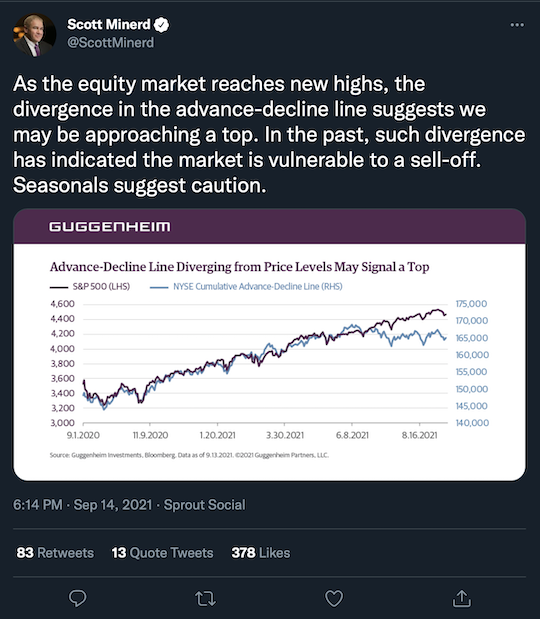 To wit: “About 15% of S&P 500 stocks are more than 20% below 52-week highs, but much larger swaths of the midcap and small-cap universe are down 20% or more,” CNBC says. “The latter groups are less tech-focused and more susceptible to an economic slowdown.”

Indeed, here’s the breakdown of stocks that are down 20% — or more — below their 52-week highs:

It should come as no surprise then that one of the market’s soothsayers, Jeremy Grantham, is alarmed. Why heed his observations? Well, he accurately predicted the Japanese asset price bubble of 1989, the dot-com implosion of 2000 and the financial crisis of 2008. So yeah…

“If history repeats itself, investors are likely to consider that the high profit margins will last forever,” he continues. Accordingly, that’s the first variable in the making of a bubble. The second? Easy money…

And there’s plenty of that to go around with historically low, low interest rates and the most significant expansion of the money supply ever — a 25% YOY increase .

Add to that: “It is clear to me that this is the most dangerous package of overpriced assets we have ever seen in the U.S.,” Grantham wrote earlier this summer. “[It] is a contender for the highest-priced market in American history.”

During the 30-odd years between the 1960s through the ’90s, “market share was all that mattered,” says MoneyWeek.

Today, mega corporations (yes, think Big Tech) are all about profit margins, and instead of using war chests for R&D or M&A, companies have been cash-flowing stock buybacks — something CEOs love because it’s very low-risk. (And let’s be honest, it enhances execs’ stock options.)

And back to Big Tech, about 85% of those profits have been accumulated by a combination of FANG, FAANG, MAGA or now FAAMG companies.

“The performance of [Big Tech] has been extraordinary — there’s been literally nothing like it in history, anywhere,” says Grantham.

“Take Apple, the company with the biggest market value in the world,” MoneyWeek says. “Last quarter it announced that sales had risen 50% in the past 12 months.”

“Give me a break,” Grantham says in MoneyWeek. “Traditionally, a brilliant year for a company of this size would mean growth of, say, 5–6%. There is no precedent for this kind of expansion… These are exceptional companies.”

But according to Grantham, the pain point for the U.S. market is that trillions of dollars in market cap are tied up in a handful of these enormous tech giants.

And while the DOJ and SEC have turned a blind eye to corporate shenanigans — including monopolization — Grantham wonders if that’s about to change.

He looks to China’s handling of its own tech companies as a warning sign, given Beijing has taken to relentlessly “bashing its new, special, powerful monopolistic entries,” including Jack Ma’s Alibaba, Tencent, DiDi and more.

Is Grantham saying a mass exit out of Big Tech stocks will be the catalyst for a market correction?

“No one can tell you what the pin was in 1929,” Grantham says, in reference to what finally bursts a financial bubble. “We [were] not even certain in 2000.

“It’s more like air leaking out of a balloon,” he says. “You get to a point of maximum confidence, of maximum leverage, maximum debt and then the air begins to leak… because tomorrow is a little less optimistic than yesterday.” (Emphasis ours.)

Grantham calls these niggling market jitters “confidence termites.” And MoneyWeek says: “They start with the speculative stuff and gradually reach the rest of the market.”

Grantham notes: “Before the great bubbles ended in 1929, 1972 and in 2000, in the U.S., the three great events of the 20th century, there was a very strange period in which the super-risky, super-speculative stocks started to underperform.”

With that in mind, Grantham’s keeping an eye on SPACs, WallStreetBets stocks and Bitcoin as bellwethers of the bull market’s end.

So we repeat what Grantham said at the top: “Today, it is clear to me that this is the most dangerous package of overpriced assets we have ever seen in the U.S.,” he concludes.

“That, combined with an equity market that can easily lose $5 or $10 trillion, depending on the magnitude of the break, is a contender for the highest-priced market in American history.”

The outcome? “A write-down in perceived wealth that would have no precedent,” says Grantham. To wit: “Whatever you do, do not let yourself believe that everything is fine,” MoneyWeek says. “It isn’t.”

[Editorial mention: While Grantham can’t pin down a specific time, the slow leak out of the market has already started.

The canary in the coal mine? The most speculative assets come back to Earth first. Only later does the rest of the market follow suit.

Back in 2000, for instance, highflying tech stocks fell 30% while the broad stock market kept rising. But in time, “confidence termites” ate through everything. Result? The beams and support walls gave way and the S&P 500 collapsed in slow-motion — down 46% across two years.

All to say, we don’t want the “confidence termites” to eat through your hard-earned investments. Which is why we’re so keen on Alan Knuckman’s unique “disaster insurance” strategy.

For as little as a few hundred dollars, you too can take out “disaster insurance” that could cover the losses elsewhere in your portfolio.

Learn more right here. And remember, it’s too late to take out homeowner’s insurance after the house is already on fire.]

“It’s clear that the bulls have one foot out the door,” says our market analyst Greg Guenthner .

“The stock market is almost completely flat on the week. The S&P is perched right at its 50-day moving average, which has been acting as up-trending support all year,” Greg says.

“It’s fall,” he continues. “The herd suspects a wider correction is in the works. Yet at the same time, many stocks have already undergone stealth corrections over the summer and are possibly setting back up for a rally.

“The best we can do is slow down (check). Clear our minds (working on it). And focus on potential opportunities (always!),” says Greg. Sound advice.

Around that time, Robert Kaplan and Eric Rosengren — presidents of the Dallas and Boston Feds respectively — released separate statements indicating they would divest their single stock holdings by Sept. 30 and pause their trading activities in individual stocks for the duration of their Fed tenures.

This after both executed “multimillion-dollar share purchases that generated the ‘appearance’ of conflicts of interest,” Business Insider said.

Now Fed Chair Jay Powell is ordering an ethics review, saying: “This review will assist in identifying ways to further tighten those rules and standards. The Board will make changes, as appropriate, and any changes will be added to the Reserve Bank Code of Conduct.”

“Because the trust of the American people is essential for the Federal Reserve to effectively carry out our important mission,” Powell says. (LOL)

[Our founder Bill Bonner commented this week: “Apparently, Fed governors made millions, trading on their insider knowledge. Will they be prosecuted? Investigated? Shamed? Not likely. The elite look out for their own.” Probably so. Unless ultra-elites need fall guys.]

Powell’s investigation might have something to do with a dozen letters Sen. Elizabeth Warren (D-Massachusetts) sent to regional Fed presidents, “demanding stricter ethics from the nation’s top central bank officials,” CNBC says.

While we’re on the subject, Warren might have inadvertently launched an Amazon bestseller…

[Another day, another strongly worded letter?] This time, Sen. Warren’s letter was addressed to Amazon CEO Andy Jassy, detailing her concerns that the website’s algorithms “appear to contribute to the spread of COVID-19 misinformation.”

“The Massachusetts senator pointed to research from her staff, which found that searches on pandemic-related topics ‘consistently included highly ranked and favorably tagged books based on falsehoods about COVID-19 vaccines and cures,’” The Guardian reports.

Warren chastised Amazon for “potentially leading countless Americans to risk their health and the health of their neighbors based on misleading and inaccurate information that they discover on Amazon’s website.”

In a statement at NPR, Amazon responded: “We are constantly evaluating the books we list to ensure they comply with our content guidelines, and as an additional service to customers, at the top of relevant search results pages we link to the CDC advice on COVID and protection measures.”

If Amazon could be less discreet, we think the company might respond: “Apart from outright censorship, what else do you want us to do?” We think Amazon knows the answer… 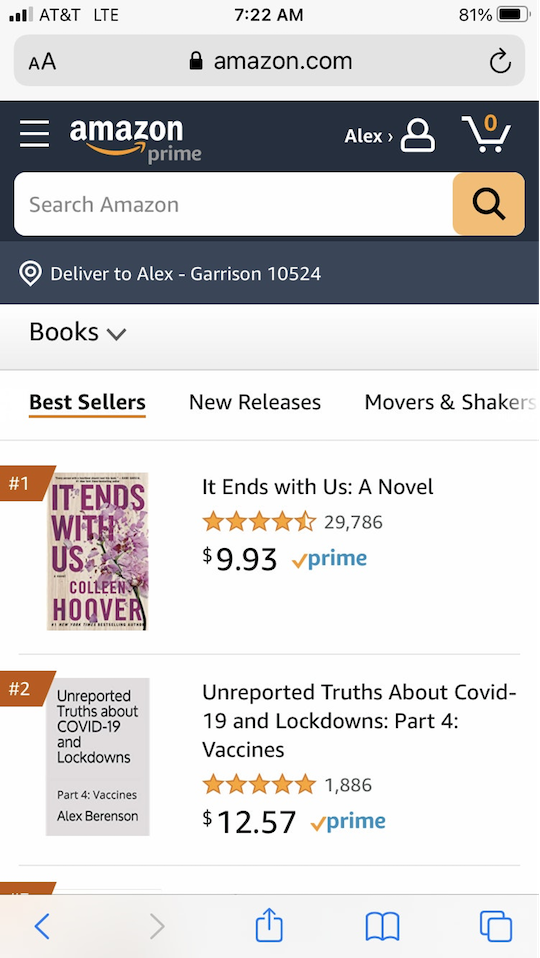 To be clear, we’re not endorsing Mr. Berenson’s work. More to the point, we don’t countenance suppression and censorship… Happy Constitution Day!

Now for the ultimate make-work project: 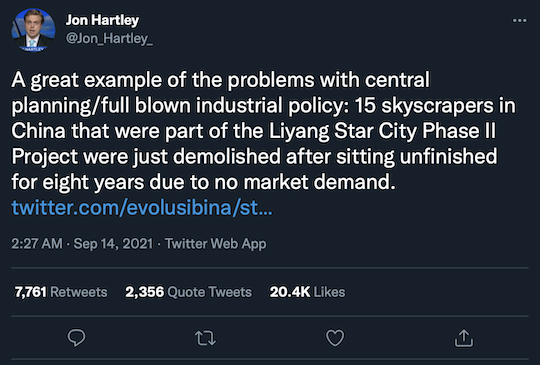 Proving “if you build it, they will come” only happens in the movies. Speaking of, the video of the implosion is nothing short of cinematic…

Enjoy your weekend, and check out our best-of issue tomorrow. Take care!