OK, so today’s the day that the implosion of China’s Evergrande starts mattering to U.S. markets. Or not.

We’ve been eyeing the trouble with Evergrande — a giant property company — all month. Today is the day a huge debt payment came due.

But instead of collecting interest, Evergrande’s debtors were paid back in property — which might be fine were it not for the slight nuance that property isn’t anywhere near as liquid an asset as cash.

Many of Evergrande’s debtors — 292 by one tally — were counting on cash payment with which to pay their own debts owed to still other entities. And it’s a safe bet some of those other entities are Western in general and American in particular.

Comparisons between Evergrande and Lehman Bros. are apt — not least because the powers that be will likely allow Evergrande to go bust while they scramble to bail out everyone else.

We pause a moment to ponder the absurdity that is Evergrande.

“If you can imagine Tesla owned by Fannie Mae, you’re on the right track in understanding Evergrande.”

As we say, absurd. Then again, as noted here on Friday, we’re talking about a country where they just demolished 15 skyscrapers in one city after they sat unfinished for eight years with no takers.

In any event, Evergrande’s Hong Kong-traded shares collapsed 10% today — setting off a domino effect spilling westward across the globe.

The Dow is doing somewhat better, although that still translates to a drop of nearly 500 points. The Nasdaq is doing worst among the major U.S. averages, down 2%.

Alas, gold is not benefiting from the rush to safety. At last check, the bid is $1,758 — up imperceptibly from Friday’s close. Cryptocurrencies are falling in sympathy with stocks, Bitcoin off 7% and back below $44,000.

On the other hand, maybe it’s not about China or Evergrande at all. Maybe it’s about what happened on Friday stateside. 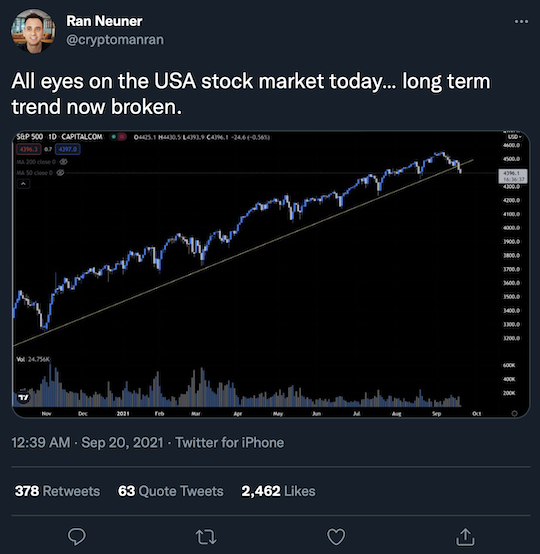 Nor is that the only bad sign from a chart standpoint. Nine times this year, the S&P 500 has bounced off its 50-day moving average — a remarkable occurrence that even market pros with decades of experience can’t recall.

The index ended Friday on the precipice. Would this be the 10th time? Obviously not. Look out below.

For all we know, what’s happening in China might stay in China. But as Jim Rickards reminds us, there are plenty of other concerns here at home that could tank the market.

“Markets are beset with uncertainty,” he says. “Will the Fed taper in November or not? Do historically high valuations in stock markets signal a crash or will the bull market continue? Will the government shut down partially at midnight on Sept. 30 if the Congress can’t agree on a budget? Will the Treasury go broke in mid-October if the Congress does not approve an increase in the debt ceiling?

“Even the best analysts with the best predictive models have to admit to uncertainty when it comes to politically driven decisions in a sharply divided government.”

As we write midmorning, we don’t know whether the sell-off will accelerate and today will turn into another “Black Monday” of market legend.

But we do know time is running out to take out “disaster insurance” on your portfolio — a strategy we discussed in depth last Thursday and Friday.

It takes as little as 1% of your assets — $500 on a $50,000 portfolio — to give yourself a protective hedge. If an outright crash materializes, you might well generate a 40X return. That’s peace of mind while your friends and neighbors are losing theirs.

Jim Rickards gives you a quick introduction to the idea right here. It behooves you to watch right away before the market takes a further tumble.

Apple’s annual iPhone dog-and-pony show was billed as “California Streaming,” but our Ray Blanco says it was more like “California Snoozing.”

Yes, there was some intrigue in the run-up to last week. As we’d mentioned, rumors abounded the new phone would have satellite-communications capability — anytime, anywhere access with or without a cell tower.

“The rumors sent shares of satellite operators Globalstar and Iridium soaring,” says Ray. “Globalstar’s satellite network uses frequencies that are part of the band that Apple was supposed to bring to the new iPhone. Why Iridium shares soared is less clear, since Iridium’s network uses a different band to communicate with people on the ground.”

But even before the announcement, Ray was skeptical: “The new rumored satellite support was supposed to be for the n53 band, also known as S-band. This band, used by Globalstar’s satellites, only supports relatively low speeds, the kind of performance that allows for a phone call or slow-speed data link.”

Kinda half-fast, don’t you think? Not exactly the Apple way.

“I believe that a future ‘Apple-Fi’ product would have to support high-speed satellite communications,” says Ray. “I don’t think Apple would settle for less in its flagship products.”

And so Apple unveiled new phones that are more evolutionary than revolutionary. “With no news, Globalstar and Iridium shares tanked.

“Furthermore, there is a startup currently working on bringing 5G-like performance to your smartphone, no special roof antenna needed. The company has done this by creating and patenting new technology that can turn satellites in space into the equivalent of orbital cellphone towers.

“And the great thing about this tech is that it will work with any current smartphone on the planet, be it an iPhone, or an Android phone or whatever phone supports current 4G and 5G standards.”

Intriguing, no? Readers of Ray’s premium Catalyst Trader service are already in the know.

The Culture of Impunity, Domestic Edition: It wasn’t just two regional Federal Reserve presidents trading securities the Fed was effectively propping up last year. It was Chairman Jerome Powell, too.

As noted here a week ago Saturday, Dallas Fed president Robert Kaplan and Boston Fed president Eric Rosengren both held positions in individual stocks at a time the Fed was intervening to halt the corona-crash in March 2020.

Both issued statements saying basically, “We did nothing wrong and we promise we’ll never do it again,” and that was seemingly the end of it.

Then, as noted here on Friday, Chairman Powell is opening an “ethics review” covering “permissible financial holdings and activities by senior Fed officials.”

Whelp, it turns out Powell himself owned at least $1.25 million in municipal bonds at a time the Fed was bailing out munis last year. CNBC deduced as much from reviewing his financial disclosure forms.

The Fed tried to wave it off by saying Powell held the bonds in a family trust over which he has no control… but no, they’re actually in a joint account he does control. 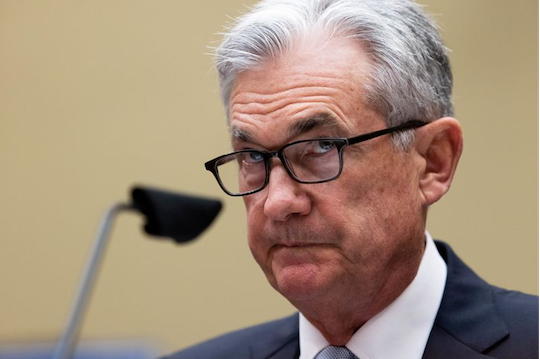 Aw man, how can I rig this ethics review now?

For whatever it’s worth, the betting markets believe this latest revelation won’t ding Powell’s chances of being appointed to another term as chairman by President Biden.

That said, we can’t help wondering if CNBC got its initial tip from someone in the camp of Powell’s most likely rival for the job, Fed governor Lael Brainard. Heh…

The Culture of Impunity, International Edition: The World Bank has junked its annual “ease of doing business” survey in the wake of a scandal we mentioned late last year.

The rankings offered an intriguing glimpse into what extent the globe’s governments offered a business-friendly environment. Governments often cited the rankings to attract foreign investors.

Alas, an internal investigation finds senior World Bank management pressured the analysts to make China look better than it should have — at a time China was seeking a World Bank loan, wouldn’t you know.

Rather than try to reform the system, the bank opted to discontinue the research.

Too bad. There’s valuable data in those reports that was untainted by scandal. We didn’t rely on the report’s overall rankings for insight as much as we did on a crucial subranking — for the ease of starting a business.

As we like to say every chance we get it, startups — businesses less than five years old — are responsible for nearly all net job creation in the United States since 1980. That’s according to a landmark study by the Kauffman Foundation.

On that score, the United States ranks a miserable 55th in the world — just below the Democratic Republic of the Congo.

New Zealand is No. 1, and four former Soviet republics are in the top 10. Oh, four of the five Nordic countries, so infamous for “socialism,” rank higher than the United States as well.

Sometime this week, the White House will resort to economic sanctions in a ham-fisted attempt to crack down on cryptocurrency usage in ransomware attacks like the Colonial Pipeline incident.

From Saturday’s Wall Street Journal: “The Biden administration is preparing an array of actions, including sanctions, to make it harder for hackers to use digital currency to profit from ransomware attacks, according to people familiar with the matter.”

The logistics are gonna be real interesting.

“The Treasury Department declined to comment and the people familiar with the matter declined to specify the targets of sanctions,” says the article.

“But to effectively disrupt illicit crypto transactions, Treasury would need to target the digital wallets that receive ransom transactions, the crypto platforms that help exchange one set of blockchain coins for another to obscure the culprits and the people that own or manage those operations, according to analysts who specialize in such transactions.”

Yeah, good luck with that. We’ll keep you posted…

“Utopias,” they’re called. “We typically only brew about 13,000 bottles every other year,” says the Samuel Adams website. The 2021 edition is set for release on Oct. 11.

However… it registers 28% alcohol by volume, or ABV, in contrast with a typical craft beer’s 6–7%.

Thus, it’s verboten in… well, we’ll let the website do the talking for us.

“Many states have ABV-based rules around where alcohol can be sold,” writes Elizabeth Nolan Brown at Reason.

But an outright ban on beer above a certain ABV? When spirits are routinely sold with 40% or higher ABV?

In many cases, it’s a holdover from state laws passed shortly after Prohibition was lifted in 1933. Only with the craft-beer phenomenon did the insanity come to light.

States started adjusting the rules in the early 2000s — at least a bit. “In recent years, this trend has grown,” Brown writes, “with more states loosening ABV restrictions by locale or overall and some, like West Virginia, pushing them even higher.”

But at 15%, the West Virginia limit is way below that of Utopias. In every surrounding state, it’s all right.

All we can do is marvel…