You never know what you’ll learn watching the reactions of financial Twitter — FinTwit, as the cool kids say — to a Federal Reserve press conference…

Granted, we needed a little help from Urban Dictionary…

Powell spoke after the Fed issued its every-six-weeks “policy statement.” The upshot of the statement is that the Fed will likely begin shrinking its bloated balance sheet starting in November.

Meanwhile, fully half the membership of the Fed’s Open Market Committee now expect to start raising the benchmark fed funds rate from its current near-zero levels sometime next year. What’s more, half the members expect a rise to 1% by year-end 2023.

That still tracks fairly closely with the market’s expectations before the Fed meeting.

As our Alan Knuckman pointed out here last week, the Wall Street consensus — as measured by the trade in fed funds futures — was looking for a rise to 0.75% by year-end 2023.

So no nasty surprises. As a result, yesterday turned out to be a good day for the stock market — each of the major U.S. indexes rising about 1%. Monday’s big spill is fading into the rearview.

And for the moment anyway, Wall Street can live with Powell’s porkies — which were plentiful.

All that bond-buying has swollen the Fed’s balance sheet to over $8.4 trillion. The purchases can’t go on forever because they would call the dollar’s credibility into question overseas. 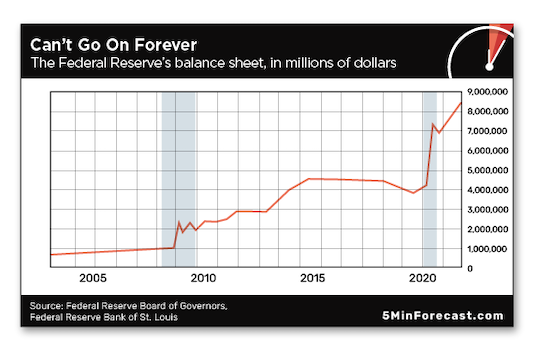 Under the timetable Powell laid out yesterday, the purchases would be trimmed back by about $15 billion a month until the line on the chart plateaued in mid-2022. All told, the process would take about eight months.

Which tees up a huge porky: Compared with the previous 10-month tapering a few years ago, “I think this will be a shorter period,” said Powell. “The economy’s much farther along than it was when we tapered in 2013.”

This is actually two porkies in one — a paired porky, you might say.

In the first place, the Fed did not taper in 2013. Then-chairman Ben Bernanke talked about tapering in 2013… but the stock and bond markets threw a “taper tantrum” and the Fed held off on starting the taper until early 2014. It’s right there in the chart above.

To be clear, by “the economy” he means the job market. That’s the yardstick by which the Fed is measuring its progress these days.

Let’s take a look at the big chart from Calculated Risk that we share each month — comparing the job losses and recoveries in every recession since World War II. 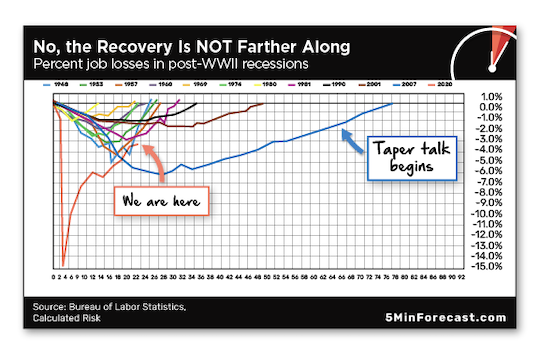 Even now, about 3.5% of the jobs that existed in February 2020 haven’t come back yet. But when Bernanke started his taper talk in May 2013, the job losses relative to the start of the 2007–09 recession were substantially less.

Thus, another amusing — if hastily typed — Twitter reaction, this one from the silver expert David Morgan… 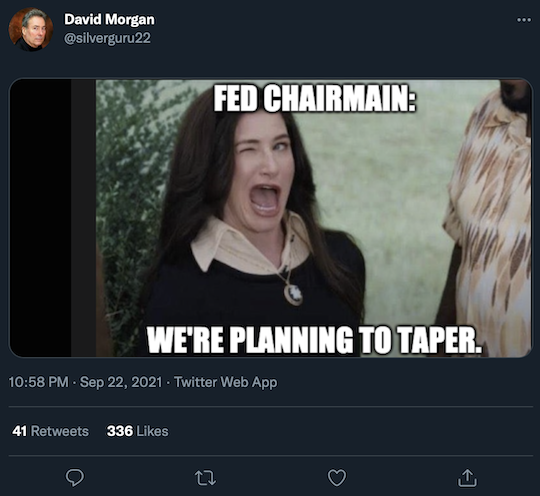 Then there’s the matter of the Fed’s pending “ethics review.” Here’s a good Powell porky: “We’re going to gather all the facts and look at ways to further tighten our rules and standards.”

As we’ve mentioned in recent days, it turns out Fed pooh-bahs owned various stocks and bonds that stood to benefit from the Fed’s pandemic rescue schemes last year. Powell himself owned municipal bonds, while Dallas Fed president Robert Kaplan was playing S&P 500 futures —- which trade at odd hours, often when the Fed makes market-moving announcements amid a crisis.

Note Powell’s language here: “It is now clearly seen as not adequate in sustaining the public’s trust. We need to make changes, and we’re going to do that as a consequence of this.”

See what he did there? He didn’t cop to any, you know, wrongdoing on the part of the Fed or any of its personnel. He simply acknowledged it’s a bad look — poor “optics,” in D.C.-speak.

So whatever “tightening” of “rules and standards” is in the offing will be all for show, not for go.

But gee, maybe we’re being too hard on Porky Powell here. Maybe he wants to believe his own BS,but he still retains some semblance of both analytical skill and a conscience.

Here we come back to an insight of the late economics blogger Robert Wenzel. Years ago, he noticed a verbal tic of Powell’s predecessor Janet Yellen.

“Whenever she faced a hostile question, she started her reply with ‘so.’ The ‘so’ makes no grammatical or logical sense. But she did put it at the start of every hostile question.”

As we said back then, answering a question this way betrays that you’re not 100% confident in what you’re saying. Or that it doesn’t jibe with what you said earlier.

Poring over a transcript of yesterday’s presser, we count 26 reporter questions — including follow-ups.

How long can he keep this up? As we’ve pointed out more than once, the gig of Fed chairman is visibly taking its toll on Powell. His aging-movie heartthrob good looks? Gone. Just compare his official Fed photo with how he looked during the “virtual” press conference yesterday… 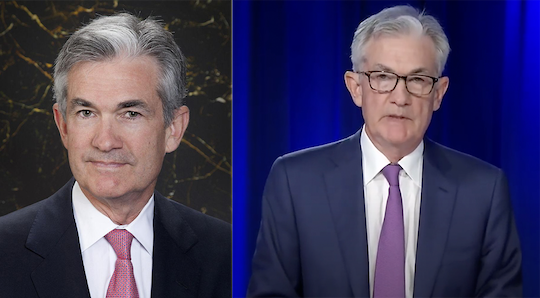 But at age 68, it appears he wants to be appointed to another four-year term. What was it Henry Kissinger said about power being the ultimate aphrodisiac?

Yesterday’s post-Fed rally is extending into today — and the Dow is leading the charge.

The one economic number of note today points to still more job-market sluggishness: First-time unemployment claims in the week gone by jumped to 351,000. Literally no one among dozens of economists polled by Econoday expected that outcome. Chalk it up in part to the supply-chain snags that have shut down several automobile factories.

The Evergrande saga has retreated from the brink of all-out crisis — for now.

The Chinese property giant says it struck a deal with domestic bondholders yesterday — sending Evergrande’s Hong Kong-traded shares up 17% on the day.

Just one problem: The announcement said nothing about how much interest would be paid or when. All told, $35.9 million was due on Monday.

Also, as we go to virtual press there’s no word on the fate of an $83.5 million payment due today to foreign bondholders.

But hey, it’ll all work out, right?

“Chinese regulators believe they have the resources to bail out or restructure Evergrande with some haircuts for creditors,” says our Jim Rickards.

“They probably do, but that misses the point,” Jim goes on. “The damage will not be confined to Evergrande. It will spread quickly to counterparties of Evergrande, including other developers and banks.”

Evergrande is knee-deep in the WMPs or “wealth management products” that many Chinese count on to fund their retirement. “Retail investors are led to believe that WMPs are like bank deposits and are backed by the bank that sells them,” Jim explains. In reality, many of them are little more than Ponzi schemes.

“A run on all WMPs will begin. When a Ponzi starts collapsing, no one wants to be the last one out. Everyone wants his money back right away… The Chinese are only looking at what’s inside the four walls of Evergrande and ignoring the fact that their entire property and financial system is on the verge of a world-historic crack-up.”

The order took effect 10 days ago — forcing many indoor businesses to allow entry only to employees and customers who supply proof of COVID vaccination.

“The lawsuit claims that unequal enforcement of the ‘Key to NYC’ mandate amounts to discrimination based on content of speech and type of speaker,” writes Rikki Schlott at Reason, “citing exemptions provided for religious services and performances at community centers and schools.”

In addition, religious services are often held with no restrictions in the very same theaters hours after performances that are subject to the mandate.

It’s a novel argument. Then again, the orders are novel too. To be continued… 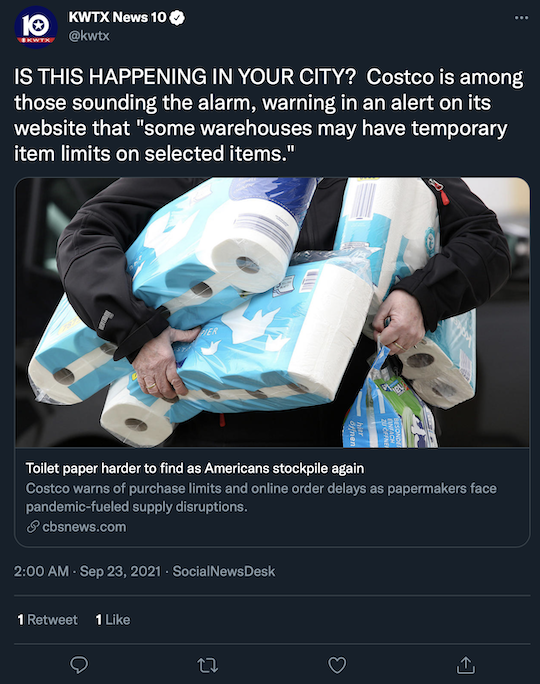 Folks ordering toilet paper from Costco online are getting notices that “Due to increased volumes, you may see a slight delay in the processing of this order.”

Meanwhile, social media is abuzz with reports of brick-and-mortar Costco stores being out of both toilet paper and bottled water. But the company is only saying “some warehouses may have temporary item limits on select items” without specifying which items.

“Regarding non-working pensioners,” a reader writes, carrying on a theme from Tuesday’s 5…

“Don’t forget that a lot of those retired pensioners may have to return to work because poor investing/planning has caused the balance sheets of those pension funds to drop.”

Probably doesn’t make any difference, does it?

One of the fascinating things that happened after the Panic of 2008 is that the size of the over-55 workforce actually grew — while the 25–54 workforce shrank steadily until 2015.

But in the wake of the corona-crash, it appears large numbers of older workers are opting for retirement — whether to avoid the virus or for other reasons.

That’ll work out as long as the stock market stays elevated. Otherwise…