Did This Tech Giant Mislead Shareholders?

“Frances Haugen, a data scientist by training and a veteran of Google and Pinterest, had been recruited to Facebook in 2018 to help the platform prepare for election interference,” says Ars Technica.

“When she quit in May, she took with her a cache of tens of thousands of documents that now underpin a sweeping congressional investigation into Facebook’s practices.” 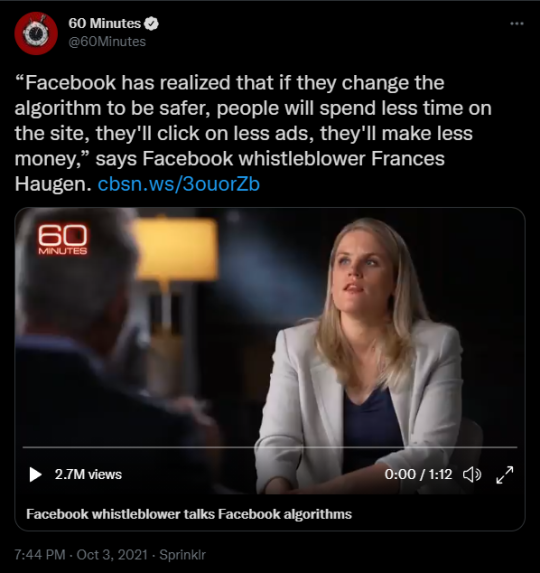 Ms. Haugen, in fact, was part of Facebook’s Civic Integrity team during the fraught campaign season, and the team was dissolved post-election in early December 2020. Facebook’s sentiment, being: Phew, that’s a wrap! Then came the Capitol riot on Jan. 6…

“It was the moment where I was like, ‘I don’t trust that they’re willing to actually invest what needs to be invested to keep Facebook from being dangerous,’” Haugen told 60 Minutes. So on Jan. 7, she contacted The Wall Street Journal and presumably took up residence in a Facebook copy room.

We could go down the garden path about social media… or freedom of speech… yada yada. But not today. What we find most interesting is a method Ms. Haugen has employed to strike a blow at Facebook…

“Haugen’s leaked documents now form the basis of eight complaints filed by her attorneys with the Securities and Exchange Commission,” Ars Technica says.

“They allege the company breached its fiduciary duty by not revealing information that was material to investors,” the article says. Her attorneys cite: “As a publicly traded company, Facebook is required to not lie to its investors.” Well, yeah…

Further, they claim the SEC has jurisdiction to investigate and impose penalties if the company lied — either by commission or omission — thereby adversely affecting shareholders.

On Tuesday, Ms. Haugen gives congressional testimony… that said, perhaps it’s a good time for Facebook to explore other options.

“Mark Zuckerberg said that in five years, Facebook would be a ‘metaverse company,’” says an article at The Guardian.

“Sharing his vision of what it might look like, the founder and controlling shareholder of the $1 trillion company described an online world where people wearing VR headsets… would not just view content but be inside it.

“It would be an online space built by companies, creators and developers in which people could also live their lives — virtually going to performances and even work…

With Clegg highlighting how the metaverse might influence society in a talk titled Journey to the Metaverse at the Atlantic Festival last Monday.

If all this sounds like a new Disney attraction, fair enough. The Guardian concludes: “While to most people the metaverse is an abstract term, internet giants are already investing much hope — and money — in it.” So why shouldn’t mainstream investors like you profit from the trend?

More on that in the weeks ahead…

After Sunday night’s whistleblowing revelations, the stock is “looking tired,” Greg says. “Of course, the stock already dropped double digits last month,” he says. ”It’s down again early this morning, but we’ll soon find out if this news is already priced in.”

All told, Greg says: “I’m not going to dig Facebook’s grave just yet.

“Meanwhile, we’re hearing more about the China situation as Evergrande stock is apparently halted in Hong Kong. That’s probably not great, but China’s markets are closed until later this week, so this news might be a slow burn in Asia until Friday,” he says.

After OPEC+ agreed today to stick to “current output policy,” says Reuters — or an extra 400,000 barrels per day through November — “oil rose sharply to multiyear highs.” Crude is up, in fact, 2.4% to $77.72 for a barrel of West Texas Intermediate.

And here’s a supply-chain workaround (as opposed to our daily “snag”)….

“Tesla shares are ticking higher after the company announced it delivered more than 240,000 cars during the third quarter,” says Greg. “That’s a record, which is impressive since we’re in the midst of a chip shortage we all can’t stop talking about.”

Indeed. While the Nasdaq index flounders, TSLA shares are up 1.25% today.

In what might become a regular feature at The 5 (seriously), we serve up another story of a Fed member behaving badly. This time it’s Fed Vice Chairman Richard Clarida… and his own skeevy trades…

Bloomberg broke the story late Friday that one day before Chair Powell announced policy changes at the Fed to accommodate for the pandemic, Clarida traded out of a bond fund into stock funds. Somewhere in the range of $1–5 million.

More specifically, according to Business Insider: “Forms filed with the government ethics office show that Clarida shifted funds out of a Pimco bond fund on Feb. 27 last year, and bought into the Pimco StocksPlus Fund and the iShares MSCI USA Min Vol Factor exchange-traded fund on the same day.”

Hmm… Feb. 27, 2020? That’s a couple weeks before the WHO pulled the trigger on the “p” word (pandemic) but just one day before Powell issued a press release, indicating…

A handful of days after the press release, the Fed cut its benchmark interest rate to near zero for the first time since 2008. “A low-interest rate environment is seen as a positive for markets because that spurs businesses and consumers to borrow, driving investment and boosting GDP growth,” says Business Insider.

The Fed’s Voluntary Guide to Conduct for Senior Officials, however, says “the System should never be used for personal gain.”

And Fed officials should “carefully avoid engaging in any financial transaction the timing of which could create the appearance of acting on inside information concerning Federal Reserve deliberations and actions.”

But in Clarida’s defense, a Fed shill tells Bloomberg there’s nothing to see here, Clarida’s massive portfolio swaps “represent a pre-planned rebalancing to his accounts” which “were executed prior to his involvement in deliberations on Federal Reserve actions to respond to the emergence of the coronavirus and not during a blackout period.

“The selected funds were chosen with the prior approval of the board’s ethics official.”

Be that as it may, more shenanigans at the Fed — on top of the disgraced Dallas and Boston Fed presidents – don’t bode well for Powell. The vice chairman is very important in the Fed’s power structure. Chances of Powell’s 2022 renomination? Diminishing…

Heh, speaking of Pimco, the firm’s co-founder Bill Gross was found guilty for harassing his neighbors in California.

Almost one year ago, we reported on the “Bond King’s” cantankerous feud with his Laguna Beach neighbors… over an outdoor sculpture.

The trouble started when Gross and his wife installed a 22-foot-long blue glass Dale Chihuly sculpture. Neighbor Mark Towfiq, a tech entrepreneur, said he and his wife could deal with that — but not with the giant netting that Gross installed to protect the work after it was damaged.

The wrangling escalated, and Gross took out his frustration — blasting the Gilligan’s Island theme song on a loop to torment his neighbors. Points for creativity? 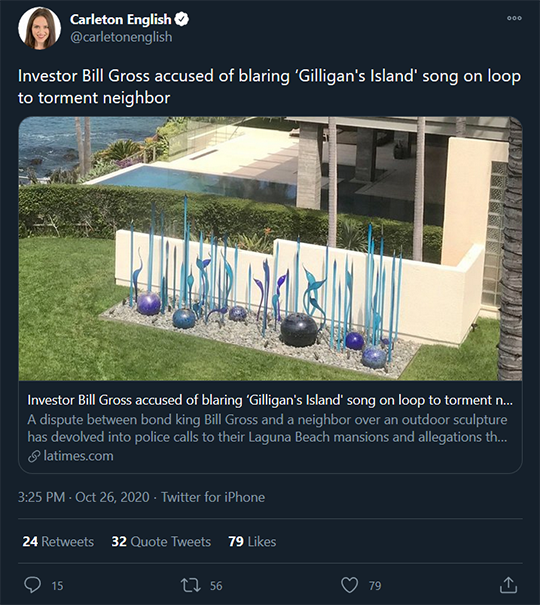 Now CNN says: “Orange County Superior Court Judge Kimberly Knill ruled that Gross and his wife, Amy Gross, violated a 2020 order that prohibited the couple from playing loud music outside their home. Now the two have been fined $1,000 each and face five days in jail as well as a ban on outdoor music.”

First of all, the fine’s literal pocket change for the billionaire. Second, CNN says: “Due to the pandemic, however, their jail sentences were suspended and replaced with two days of community service. The remaining three days also could be suspended — if they abide by the restraining order for a year.”

For his part, Mr. Gross calls the court’s ruling “a travesty of justice and a black mark on the Orange County judicial system.”

He’s not an out-of-touch billionaire, is he?

For a double dose of quirk today: The Boston housing market is so hot… How hot is it?

This charmer in the suburb of Melrose was on fire in August, listed for sale and is already under contract… 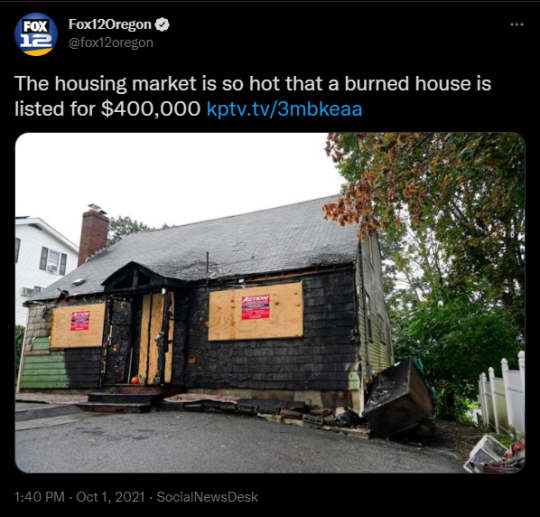 The website’s listing says: “ATTENTION CONTRACTORS! This home suffered a fire that damaged the front facade. House is in need of a complete renovation or potential tear down and rebuild… House being sold as is.

“Great potential to build a new and adorable home in desirable Melrose, a town where property values continue to rise, boasting a thriving downtown, a commuter rail to Boston, excellent schools and multiple restaurants, coffeehouses and local boutiques.”

Take care, and we’ll be back tomorrow…