“A Mad Rush to the Exits”

It’s the week when the next Evergrande shoe is set to drop. Or to be more accurate… shoes.

As a reminder, China Evergrande Group is the peculiar property firm — our Jim Rickards likens it to “Tesla owned by Fannie Mae” — that’s having trouble repaying its creditors.

The firm has hundreds of debtors, both domestic and foreign, who are counting on payment from Evergrande — the better to pay off their own creditors.

Just who those other creditors are is shrouded in mystery… but it’s a safe bet many of them are Western in general and American in particular.

In other words, what happens in China doesn’t stay in China. All those empty skyscrapers we Americans have spent years mocking? There might well be Americans left holding the bag. 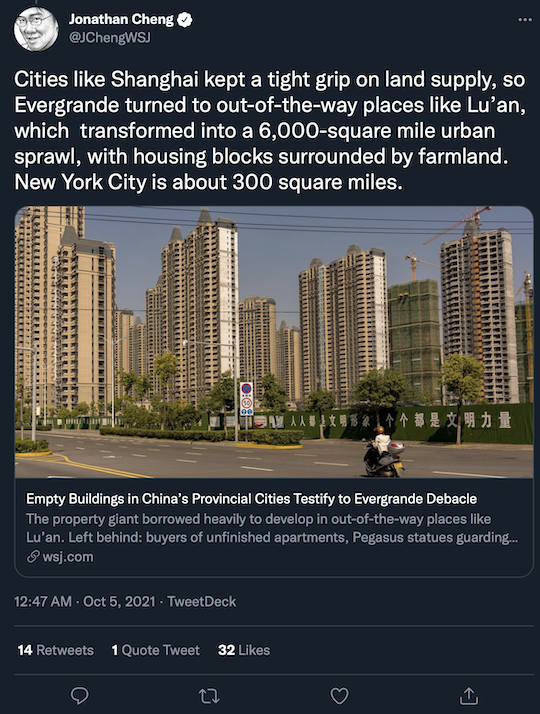 Yesterday, trading in Evergrande shares on the Hong Kong exchange was suspended in advance of “an announcement containing inside information about a major transaction” — presumably selling off a major unit of the company to raise cash.

Alas, no such announcement was forthcoming.

The next two shoes to drop are two other Chinese property firms that have missed their own debt payments.

Punishment has been swift and sure. One of them, Sinic Holdings, has just been downgraded by Fitch Ratings.

The other, Fantasia Holdings, took a 50% hit to its share price yesterday.

Adding to the uncertainty is the fact mainland China markets are closed all week for a holiday. They won’t reopen till Friday.

Key point Jim Rickards has been making to his readers for weeks now: “You can’t wait for the shock to occur because by then it will be too late. You won’t be able to get your money out of the market in time because it’ll be a mad rush to the exits.”

What’s the safest, surest way to protect yourself from the fallout?

Moments ago, Jim completed a Zoom call with several thousand of his most loyal readers, outlining what he sees as a coming “four quarters of chaos.”

But if you didn’t take part, we didn’t want to leave you out of the loop. The replay is available for you to watch right here; check it out right away while the information is still fresh.

In the meantime, the major U.S. stock indexes are clawing back most of yesterday’s losses.

Facebook is enjoying a relief rally of sorts — up 1.8% even as the “whistleblower” Frances Haugen testifies to Congress and flatters the congresscritters who believe that Facebook doesn’t engage in enough censorship.

As for the giant Facebook outage yesterday, the company is chalking it up to “networking issues.” Heh, it’s a heckuva networking issue when the employees best equipped to fix it can’t even get into the building because their keycards don’t work. 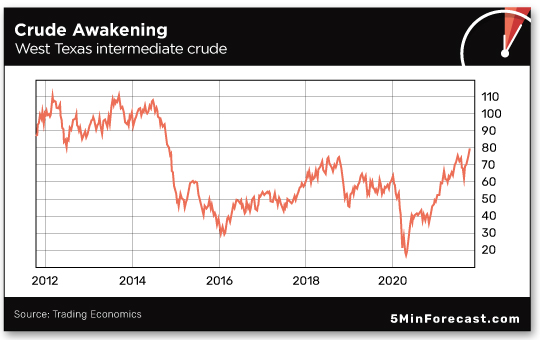 Crypto continues hanging tough despite the big Chinese crackdown a few days ago — Bitcoin less than $100 away from $50,000.

Earnings season starts a week from tomorrow… and it could prove a mighty disappointment.

Yes, the economy continues to pick itself up off the floor, the media’s Delta doom notwithstanding. “Businesses are growing profits… employers are hiring… consumers are shopping and eating out and going on trips,” says our Zach Scheidt.

But on the flip side… “the high rate of growth over the past year now creates a bit of a hurdle for companies about to report earnings.

“In the last few quarters, these companies have reported amazing growth rates. It hasn’t been uncommon to see sales surge by 100% or more (compared with the year before). And profit increases have hit similar levels. But what happens when these same companies report profits that are ‘only’ up 30%?

“Since investors are already conditioned to expect big numbers, it’s going to be very difficult for companies to keep meeting (not to mention exceeding) investor expectations.”

Result? “Speculative stocks of companies with grand growth plans are much more vulnerable,” Zach goes on.

“Investors will soon move capital out of these speculative stocks and into shares of companies with actual profits, dividends and reasonable stock prices.

“Ironically, the safest stocks on Wall Street may soon be the ones with the biggest returns.

This typically happens during periods when investors become more concerned and move capital into stable areas and away from speculative growth areas.

“By investing in these solid companies before the market temperature changes, you’ll protect the profits you’ve accumulated over the past year.

“Focus on stocks that pay reliable dividends… companies that sell products and services that people buy no matter what… and be sure to invest in firms that have a strong financial position with enough cash and not too much debt.”

While the mainstream is devoting much digital ink to the “Pandora papers”… we’re having trouble stifling a yawn.

Ironically, we’ve seen the smartest takes from folks who are far left of center on economics… 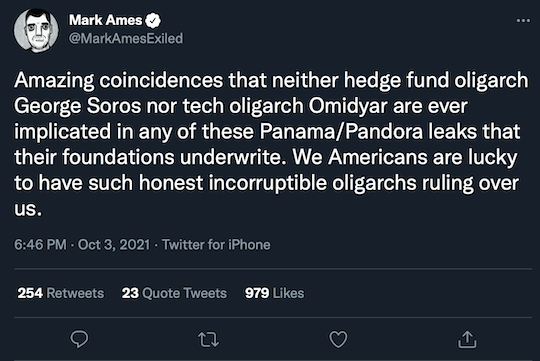 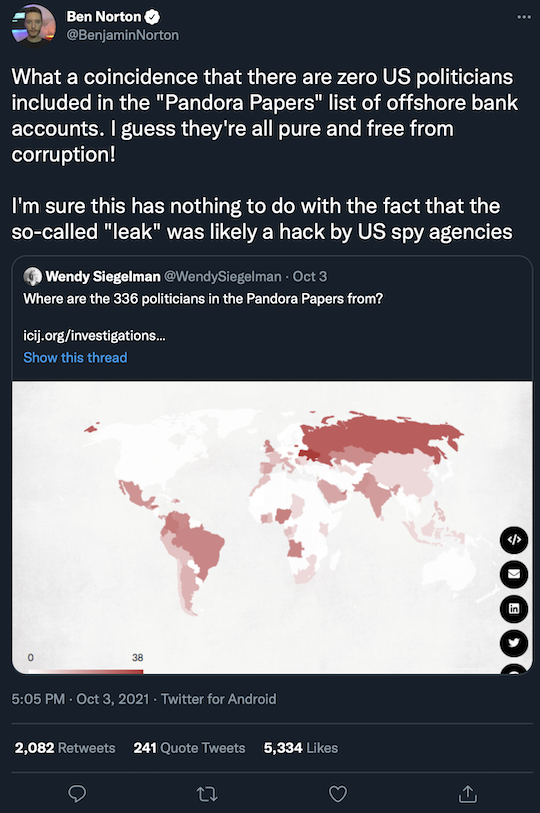 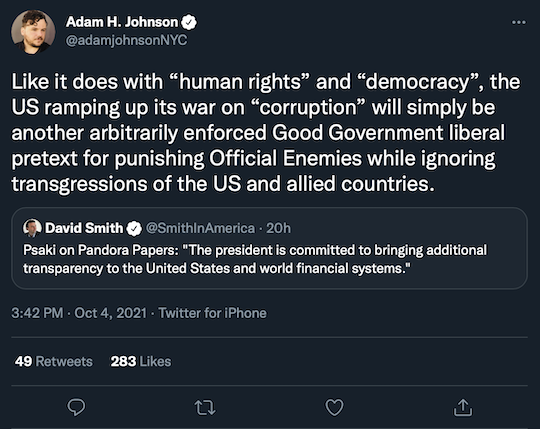 Less than meets the eye: “A Florida-based silver miner has filed a damages claim against JPMorgan,accusing the bank of manipulating the silver market to push prices so low the company’s mine had to close,” according to the Reuters newswire.

The suite claims Hidalgo Mining Corp. raised $10.35 million from investors to fund operations at a silver mine in Mexico. But with silver prices crashing from $31 to $19 between 2012–2014, the company had to walk away from the project.

Per Reuters, the suit leans heavily on “an investigation by U.S. regulators which found that JPMorgan staff between 2008 and 2016 sent fake buy and sell orders into metals and Treasuries markets to move prices in their favor” — in other words, the practice known as “spoofing.”

“Yes, yes, spoofing is bad,” says our friend Chuck Butler writing at The Daily Pfennig, “but for once I would like to have the government file a suit for price manipulation using short paper trades.”

No, Chuck’s not holding his breath… and neither are we.

Sign of the times: The cult-favorite LaMar’s Donuts chain is jacking up prices 20% nationwide in the wake of an employee walkout in the well-heeled Kansas City suburb of Overland Park, Kansas.

“LaMar’s said the hike is necessary so it can pay employees more as well as cover other costs that have increased since the beginning of the pandemic,” reports Kansas City’s Fox affiliate.

As for that walkout? “The employees claimed they were underappreciated, underpaid and overworked. The LaMar’s location reopened the next morning with a crew from Denver, according to the company.”

Having once lived on the Great Plains, your editor has it committed to memory that the distance between Denver and Kansas City is a round and rather large number — 600 miles. Not an insubstantial expense to eat to keep the store open.

To be clear, the price increases apply only to corporate-owned stores. Franchisees can make their own call.

On the subject of supply-chain snags, “The shortage of completed semi trucks really is inconsequential,” a reader writes with tongue firmly in cheek — “as there is a lack of truck drivers to drive said trucks.

The 5: The problem solves itself, right?

Seriously, though, let’s think even further ahead: What happens when parts shortages start to bite? When the tractor-trailers literally can’t run without a part that’s stuck aboard a containership wandering off Los Angeles for lack of a berth?

Forget trucks. What about parts for power plants?

Could be a rough winter. These lockdowns are the gift that keeps on giving, aren’t they?

“A long time ago (before quantitative easing), you predicted the federal government would eventually require IRAs to have a certain percentage of the balance be invested in U.S. Treasuries.

“Quantitative easing seemed to alleviate the need for that coercive allocation.

“Then negative interest rates in Europe and Japan helped to generate demand for U.S. Treasuries.

“Some people say that the boomer generation will probably switch from equities to bonds. Since you say that the government will likely set required minimum distributions with Roth IRAs, what, again, is the possibility the federal government requires an IRA have a certain percentage of its balance invested in U.S. Treasuries?”

The 5: Good memory you have.

We did think it was a real risk perhaps a decade or so ago — a forced allocation to Treasuries in retirement accounts. But we underestimated the “creative capacities” of the Federal Reserve to just sop up the excess Treasury issuance with newly printed money.

For now, it strikes us as a rather remote possibility. The example of Japan seems instructive.

Japan has a staggering level of government debt relative to its economic output — a debt-to-GDP ratio of about 266%, or double that of the United States.

Is there any doubt that under similar circumstances, the Fed would make a similar choice — keep a lid on rates and tank the dollar?

Besides, what would such a forced allocation ultimately look like? People would have to dump stocks in order to buy the bills, notes and bonds. That would tank the stock market… which we know in the present era is something the Fed absolutely does not tolerate.

So while we’ve got plenty of worries right now… that’s not one of ‘em!