File under “shocking but not surprising”… 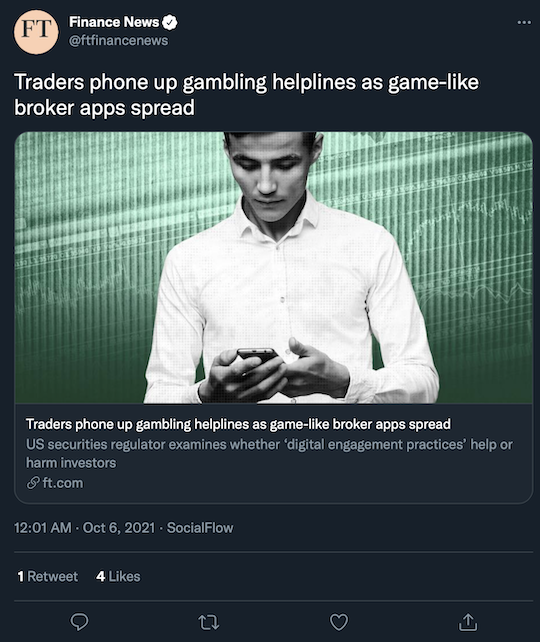 With the advent of Robinhood and other super-slick brokerage apps, “the line between gambling and investing, which was already pretty fluid, has almost been completely erased,” says Keith Whyte, executive director of the National Council on Problem Gambling.

Whyte’s remark appears in a Financial Times article with the following premise: “The rise of mobile brokerage applications outfitted with prompts, animations, rewards and digital flourishes have brought the feel of investing platforms closer to online sports betting and gambling.”

Makes sense, right? The background of Robinhood’s founders isn’t in finance but in social media. Thus the video confetti to celebrate each transaction and push notifications whenever a position moves up or down 5% or 10%.

Still, we’re a bit skeptical: The article has a vibe of what the media critic Jack Shafer calls a “bogus trend story” — long on anecdotes, short on statistics to back up the story’s premise.

Only two statistics show up in the article. One comes from the outfit behind the 1-800-GAMBLER helpline — which says calls related to day trading are up 50% since the start of the pandemic. But that call volume still pales in comparison with calls about lotteries and sports betting.

The other statistic is that the Securities and Exchange Commission collected more than 2,000 submissions during a public-comment period ended last Friday. The topic at hand — potential regulations governing the “gamification” of brokerage apps.

But even if we lay aside that objection and concede the story is onto something… so what?!

Millennials who use these apps are well aware the lines between capital markets and casinos are, well, rather blurry.

Indeed, we addressed the phenomenon at length last January when young people were bidding up the shares of GameStop Corp. (GME) — a video-game retailer that by traditional Wall Street standards should have been circling the bowl.

The WallStreetBets crowd on Reddit — scarred and impoverished at a vulnerable age in the Panic of 2008 even as Wall Street fattened itself on bailouts — saw a chance to both level the playing field and better their lousy lot in life.

“It’s no coincidence that millennials treat the stock market like a casino and see cryptocurrencies as their ticket to financial freedom,” observed our acquaintance Demetri Kofinas, host of the Hidden Forces podcast.

“Investing in Bitcoin isn’t seen by my generation as a speculation — it’s seen as a ticket out of a system that is structurally disadvantageous to us and which is built to extract our income in the service of debts owed to the previous generation.”

Not that he finds this a salutary development. As 2021 has worn on, Mr. Kofinas has developed a thesis of what he calls “financial nihilism.”

In essence, the millennials have adopted a zeitgeist in which macroeconomic forces and traditional valuation metrics like sales and earnings are meaningless. All that matters is the creation of a narrative and the ability of enough people to move an asset by sheer force of their numbers.

If government officials are going to wring their hands about the “gamification” of investing, shouldn’t they examine their own responsibility in giving rise to the phenomenon?

They’re the ones who repealed the Glass-Steagall Act in 1999 — giving Wall Street license to make all manner of leveraged bets with a taxpayer backstop.

They’re the ones who decided near-zero interest rates were the only thing that could “save the economy” in 2008 — pushing savers out of fixed-income and into the stock market.

They’re the ones who locked down the economy last year, leaving a generation of baristas and Uber drivers with time to spare and money to burn. What did they expect those millennials to do with their stimmy checks?

And so The 5 presents a financial variation on the “Who radicalized you?” meme that’s been going around right-wing circles for a while now…

But no, it’s easier to blame it all on Robinhood and the algorithm, isn’t it?

To the markets — where the big movers are crypto and crude.

Meanwhile, the major U.S. stock indexes are giving back some of yesterday’s gains. The Nasdaq is holding up best, down a half percent to 14,364. The Dow is taking it worst, down more than three-quarters of a percent and clinging to the 34,000 level.

Oil? After the weekly inventory numbers from the Energy Department, a barrel of West Texas Intermediate is down $1.40 at last check. But at $77.43, we’re still basically looking at highest-since-2014 levels.

“We have all manner of budding energy crises,” says our resident oil field geologist Byron King — and he’s not even talking about gasoline shortages in Britain or electricity cuts in China. We’re talking strictly stateside.

“Begin with natgas production based on the past decade of fracking. The U.S. is a gas giant, with ample output in the pipelines. But the economics of gas (and by extension of LNG) have created incentives for producers to liquefy molecules at seaside terminals. Then the LNG is exported, mostly to Asia and not to Europe, which contributes to Europe’s energy problems.

“In other words, China is paying high prices for LNG and that draws supply via LNG out of the overall U.S. energy complex. Exported LNG has tightened U.S.-Canadian pipeline gas supplies and led to dramatic price rises this year, over 100% since January. If you haven’t seen a shockingly high gas bill so far this year, just wait until the cold winds begin to blow.

“On the oil side, U.S. output has declined over the past 18 months for all manner of reasons, many related to COVID and many more related to the Biden administration and its visceral hostility to the hydrocarbon industry.

“One aspect of this is higher oil prices, and certainly higher fuel prices at the pump, up by 75% or more since last January.

“Stand by to continue paying high prices at the fuel pump, if not even higher prices per gallon. And your electric and gas bills will likely go up this winter as well.”

You can always offset those rising bills with a well-chosen energy play. Right now Byron likes Exxon Mobil (XOM) — and why not, with a 5.8% dividend?

The Evergrande saga remains in suspended animation for the moment.

Still no word about the Chinese property giant selling off a piece of the company to raise cash so it can pay its creditors. And so the spillover threat still looms.

“Evergrande is not merely the largest real estate lender in China,” says our Jim Rickards. “It is a major property developer with interests in construction, finance, property management, banking, media and even electric vehicles.

“Evergrande is currently illiquid and is heading quickly toward insolvency and bankruptcy. The company has financed much of its activity through the issuance of wealth management products (WMPs), a kind of unsecured commercial paper sold by Chinese banks. Retail customers routinely mistake WMPs for insured bank deposits. They are not.

“WMPs constitute the largest Ponzi scheme in the history of the world. New WMPs are issued to bail out projects financed with maturing WMPs. Those maturing WMPs are either rolled over or redeemed with new WMPs. That’s the essence of a Ponzi scheme.

“Evergrande’s failure will not be limited to real estate and will not be confined to China,” Jim goes on.

“Evergrande has connections to a network of private companies, state-owned enterprises, vendors, noteholders and homebuyers all of whom will suffer losses as Evergrande collapses. Vendors will go unpaid. Creditors will suffer huge haircuts on their notes. Stockholders will likely receive nothing in the end.

“Worse yet, homebuyers will find that their apartment buildings and houses will go unfinished. WMP holders will be wiped out. The losses will be so great that social unrest cannot be ruled out. Some demonstrations in bank and Evergrande offices have already started.

“Part of the attempted bailout consists of seizing Evergrande projects and paying creditors in kind in the form of deeds to unfinished projects. But those real estate projects will quickly be dumped by creditors. This will depress real estate prices and lead to further sales. The ripple effect of the Evergrande collapse will be an across-the-board crash in real estate markets beginning in Asia and spreading around the world.”

Until the next Evergrande shoe drops, there’s still time to watch Jim’s exclusive debriefing yesterday about the “four quarters of chaos” he expects will define markets going forward. Watch now — before it’s too late to prepare.

Well, here’s somebody making the most of the global supply-chain snags… 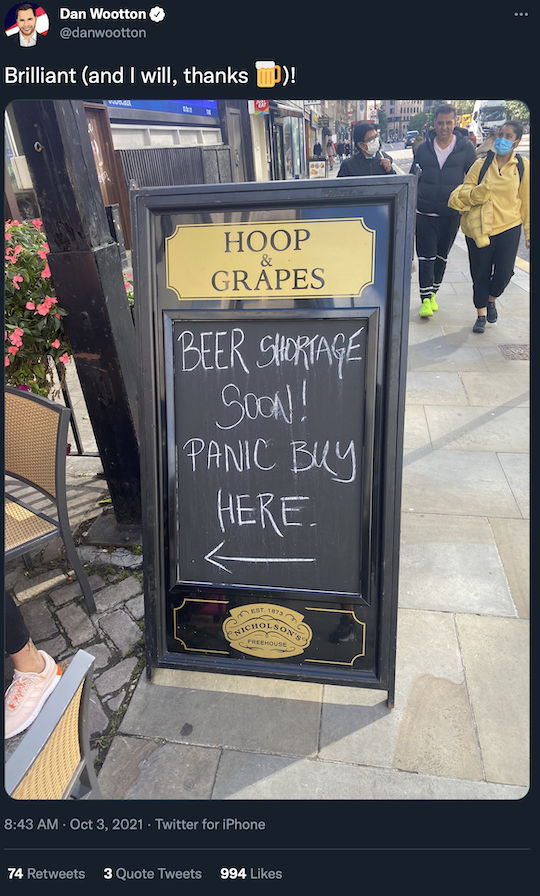 Near as we can tell, that’s somewhere in Great Britain. They are experiencing spot shortages of beer across the pond thanks to a shortage of truck drivers — a hangover (so to speak) of both lockdowns and Brexit.

“There are definitely different real estate markets in different areas,” a reader writes after we took note of a burned-out home in the Boston area (on a postage stamp-sized lot) listed for $400,000.

“I receive constant offers from real estate developers to buy my house. They don’t want the house; they want to buy it so that they can tear it down and build a 5,000-square-foot mansion.

“A half-mile away, a developer purchased an old house, tore it down but went even further. They are building two houses on that 7,500-square-foot lot. The larger unit (4 bedrooms, 3.5 baths) is selling for $2.4 million and the smaller unit (2 bedroom, 2.5 baths) for $1.2 million.”

The 5: The mind boggles. Thanks for checking in. Anyone else with their own hair-raising tales, write in and regale us.

P.S. We’ve got something new and exciting cooking at our firm — indeed, something I don’t believe we’ve done since 2015.

Perhaps you’ve gotten a sneak-peek announcement already, but if not we’ll be sure to clue you in before week’s end.

In the meantime, you might want to pencil in the following date on your calendar — Thursday, Oct. 14. That’s a week from tomorrow. Stay tuned…