World leaders are hurtling their way ever faster toward implementing a “GloboTax” — a worldwide minimum corporate income tax rate of 15%.

Our Jim Rickards anticipated this very development in his 2016 book The Road to Ruin.

In June, leaders at a G7 summit came to terms on a GloboTax deal. “Expect this to become law in the next year or two,” Jim said here in The 5.

But the speed with which GloboTax is becoming reality is breathtaking.

Last Friday, representatives of 136 governments and jurisdictions agreed to implement the concept. It was the last major procedural hurdle.

The proverbial dam broke when Ireland agreed to go along with the 15% minimum. Ireland is rather famously home to a 12.5% corporate tax rate — and thus also home to the European headquarters for some of the biggest U.S. tech companies.

Hungary too would have to jack up its rate — to say nothing of zero-tax havens like the Cayman Islands, British Virgin Islands and Channel Islands.

Why did the tax havens and low-tax countries give in?

“The answer is that they were bullied into it by the G7 and other major developed economies,” says Jim Rickards.

“Those countries control global payments channels such as Fedwire and SWIFT. The low-tax countries were threatened that if they did not join the new accord, their access to dollar and euro payments systems could be cut off. It was a case of join or be shut out of the system.”

Once again, we see the reality described by France’s finance minister in 2018: “The international reach of U.S. sanctions makes the U.S. the economic policeman of the planet.”

The train had stalled out during the Trump years, but Biden’s Treasury Secretary Janet Yellen has been making up for lost time this year — decrying the “race to the bottom” among countries undercutting each other with lower corporate tax rates.

Most important for Yellen and co., a global minimum gives Washington cover to raise the corporate tax rate in thiscountry from the present 21%.

“The most important part of this new global tax system is not the unified rate, but the information-sharing provisions,” Jim goes on.

“Mega companies such as Google, Facebook and Apple have been able to avoid paying high income taxes,” Jim explains, “not just by using tax havens, but also by directing sales revenues and intellectual property royalties to low-tax countries that may have arisen in higher-tax countries such as France, Japan and the U.K.

“These transfer payments were difficult for authorities in individual countries to track down because they could not see the entire global picture from the perspective of the taxpayer. Now tax authorities will have access to that information through the sharing arrangements.

“Companies will find they are being audited by five or six major countries at the same time, all with access to complete income and expense figures and critical cross-border payment information.”

Granted, the U.S. Congress still gets a say before all’s said and done — for whatever that’s worth.

Congress would have to first update the existing minimum tax — a provision that would probably pass with ease.

Then it would have to adopt changes to the global rules about where income is taxed — which might not come as easily.

Sen. Pat Toomey (R-Pennsylvania) says such a sweeping change would amount to an international treaty — thus requiring a two-thirds majority in the Senate.

“Even Democrats seem unsure,” according to a Bloomberg article this morning. “When asked whether a treaty would be necessary, Ron Wyden, chairman of the Senate Finance Committee, responded cryptically. ‘I think there are going to be some procedural issues there,’ he said.”

[Wyden is a tax-and-spend liberal, but he’s got a healthy measure of respect for the Constitution. More than many Republicans, we daresay…]

“This global tax plan is just one more property grab by governments with an insatiable appetite for more revenue,” Jim says by way of a final warning.

“I did global tax planning for Citigroup earlier in my career and I can attest to the fact that this type of information sharing can be quite effective at increasing taxes on companies. Of course, higher taxes for governments mean lower profits for companies or higher prices for customers.

[Ed. note: Jim Rickards will be on hand for our exclusive Six Predictions Summit this Thursday, featuring six of our top editors. He’ll have the very latest intel on the China Evergrande saga… how it’s turning into a financial contagion… and what it means for your investments this month.

We’re all set for this Thursday at 1:00 p.m. EDT. Access is FREE, but we do have a capacity limit of 10,000… so we ask that you register in advance by clicking this link.]

The stock market is off to a “meh” start for the day — all of the major U.S. indexes in the red, but by slender margins. For the record, the S&P 500 is about 4% off its record high notched on Sept. 2.

The rupture in interest rates we anticipated yesterday hasn’t materialized; in fact, the yield on a 10-year Treasury is retreating as we write to 1.59%.

Bitcoin is down slightly the last few hours, but still near five-month highs over $57,000.

Traders are chewing on an update to the International Monetary Fund’s economic outlook — lowering its global growth forecast and upping its global inflation forecast for the rest of the year. Really sticking their necks out there, huh?

Speaking of the IMF…

It was Georgieva who was running the World Bank a few years ago during a “pay for play” scandal we’ve described before.

As it happens, the pressure resulted in China getting a better ranking than it should have in 2017 — at a time China happened to be seeking a World Bank loan. The 2019 report was also manipulated on behalf of three countries including Saudi Arabia.

But nope, the IMF board concluded there was insufficient evidence the scandal sullied Georgieva’s hands. In a statement, the board says it trusts her “commitment to maintaining the highest standards of governance and integrity in the IMF.” 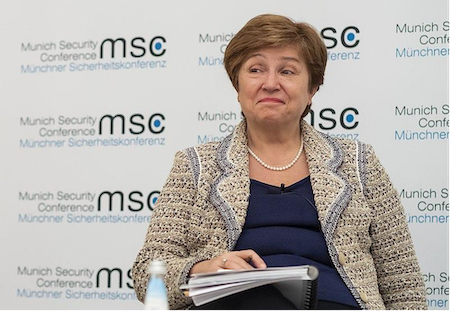 Meanwhile, we still haven’t heard about anyone at the World Bank who’s been fired or disciplined.

But as mentioned here last month, the World Bank has discontinued the Doing Business report. Too bad — it did compile some useful information, especially about the ease of launching a new business.

“Small-business owners are doing their best to meet the needs of customers, but are unable to hire workers or receive the needed supplies and inventories,” says Bill Dunkelberg, chief economist for the National Federation of Independent Business.

The NFIB is out this morning with its monthly Small Business Optimism Index. It fell during September from 100.1 to 99.1 — a six-month low.

Helping push the number down is a drop in expectations for business conditions over the next six months.

On the “single-most important problem” part of the survey, good help remains extremely hard to find: “quality of labor” is cited by 28% of survey respondents — a record high in the decades-long history of NFIB surveys.

Taxes are in a distant second place at 17%. In third place are labor costs — cited by 12%, also a record.

From the “Anything Not Mandatory Is Prohibited” Department… Texas Gov. Greg Abbott has issued an executive order banning “any entity” including private businesses from implementing vaccine mandates.

Uh, what happened to Abbott’s insistence via a spokesperson last summer that “private businesses don’t need government running their business”? 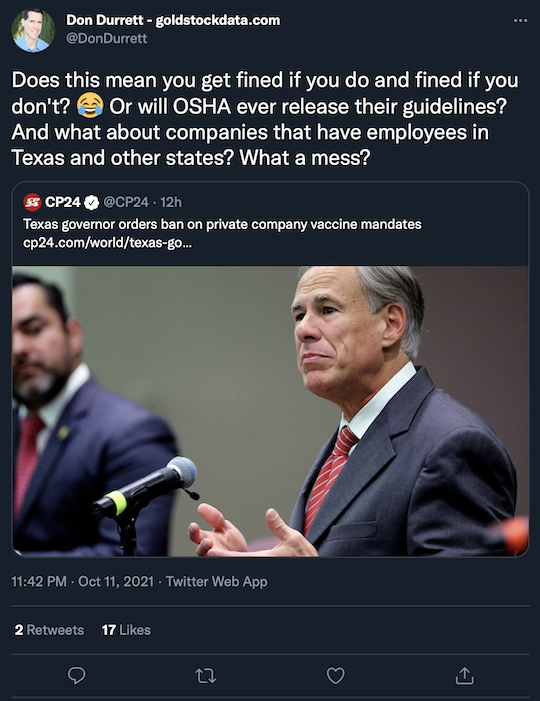 What do Texas-based Southwest and American Airlines do? As noted here yesterday, they’re both federal contractors and are thus under very real federal orders to have all employees vaccinated by Dec. 8.

Hey, we have an idea: Why not leave it up to each business to decide what vaccine policy they want to pursue and leave both state and federal government out of it?

Yeah, we know. Too sensible…

Because our contempt for politicians is thoroughly bipartisan, we’re also compelled to call out California Gov. Gavin Newsom for his own brand of meddling.

Under a law he signed Saturday, “California will soon ban the sale of new gas-powered leaf blowers and lawn mowers,” says The Associated Press — “a move aimed at curbing emissions from a category of small engines on pace to produce more pollution each year than passenger vehicles.”

But get this: The category of “small off-road engines” prohibited under the law incorporates… portable generators.

So wait. If you want to buy a genny so you can cope with California’s increasingly erratic electric grid… you’re SOL after Jan. 1, 2024, when the new rules might take effect? Amazing.

Presumably you can get around the law by buying a generator powered with natural gas or propane — unless thosecome into the regulators’ crosshairs.

Whelp, just one more way California is wiping out the middle class…

On the subject of vaccine mandates and their effect on businesses, a reader writes…

“I have multiple nurses who are dental patients and they are quitting after 25-plus years of work or more because of vaccine mandates. And they have all had COVID, some more than once. Apparently natural immunity doesn’t matter. Only the vaccine. Idiotic if you ask me.”

The 5: So much for last year’s “health care heroes,” right? 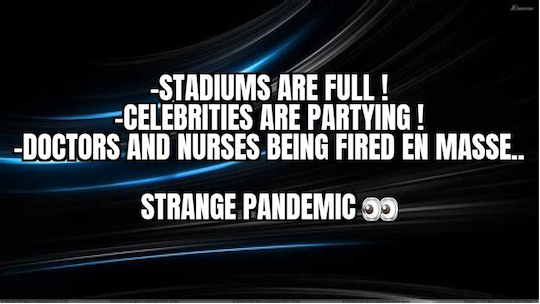 “I bought a house in Tempe, Arizona, in 2016 for $195K,” writes a longtime reader with a ground-truth report on the real estate market.

“Weekly I get texts from cash buyers who will take this house as is, pay all closing costs, etc. I generally ignore or STOP-reply.

“As this insane market goes up, seemingly forever, I decided it was time to take profits, because nothing is forever.

“Rather than fix up the house and make it all pretty I decided I would start answering these texts. So I would reply with, ‘Make an offer,’ or ‘$400,000 out the door and it’s yours.’ This did not seem to get any of these buyers’ attention.

“Then I got a text from a person who asked some specific questions about the property. How old is the AC unit? Granite countertops?

“About five questions, answered. I then told the person what the house needed: new electrical panel, some repairs in the kitchen, etc.; basically all that was wrong with it.

“Sight unseen, except for a possible drive-by, almost a half a million dollars! It will close on Oct. 29.