“The Chinese handed an incredible opportunity to the U.S. and Canada to now dominate the digital currencies,” says Jim Bianco, founder of the institutional research outfit Bianco Research. “Let’s not blow it.”

As you might recall, the Chinese government banned cryptocurrency mining in June.

Up until that time, China was responsible for the lion’s share of crypto mining around the world.

Now? According to the Cambridge Bitcoin Electricity Consumption Index from Cambridge University… it’s advantage America. Check out the bottom red and blue chunks of this graph… 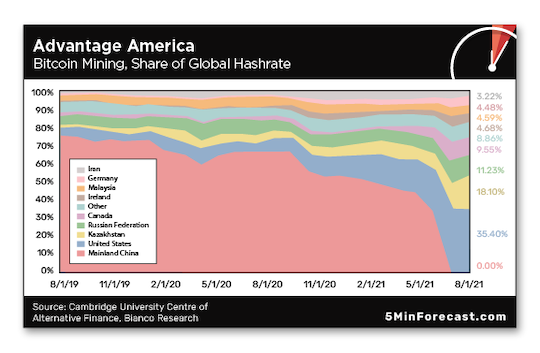 “But hold on,” you might be saying. “I keep hearing how American regulators are going to strangle crypto in its crib.”

True enough. As noted here in August, Securities and Exchange Commission chief Gary Gensler has been rather vocal about how there’s no “use case” for crypto beyond money laundering, tax evasion and so on.

But our resident crypto evangelist James Altucher is willing to give the feds the benefit of the doubt. In fact, he sees America pressing its advantage.

“More than ever, policy decisions are made with a consideration toward the escalating tension between China and the West,” James explains.

“China’s aggressive policy changes over the past year — including asserting control over Hong Kong and Chinese internet companies — indicate an increasingly unfriendly attitude toward democracy and free-market economics.”

As a result, American regulators “are now recognizing the opportunity to use cryptocurrency as a tool to disrupt Beijing’s tough financial controls,” James ventures.

“It’s no secret that China has long used its banking system to limit currency flows in and out of the country.

“These policies have allowed the government to indirectly maintain influence over domestic and foreign companies.

“I would not be surprised to see the country exert even greater control over the financial system should the Chinese economy hit a rough patch.”

So let’s tease out that “rough patch” scenario a bit further: “In this case,” says James, “cryptocurrency’s decentralized design could offer a perfect workaround for Chinese citizens struggling to move their money out of the country.

“In an ideal scenario, U.S. regulators could even use cryptocurrency policy as a bargaining chip to advance other policy objectives with Beijing.

“For this reason, I expect regulators will take a more balanced approach to cryptocurrency regulation than CNBC and the financial media would have you believe,” James concludes.

“Although regulators may take a strong stance publicly, the reality is that China’s influence looms large over financial regulation.”

Word. We said more than two years ago in The 5 that Trump’s trade war with China would morph into a new Cold War, and it would last far beyond Trump’s administration. Crypto is just one front on which it will be fought.

James’ guidance: “Investors should be prepared for volatility following regulator comments in the coming weeks… and be ready to buy the dip!”

[In the meantime… Did you catch James’ talk during our exclusive Six Predictions Summit last week?

If you’re still trying to make heads or tails of Bitcoin, the blockchain and decentralized finance… James delivered a presentation that was a tour de force but also readily accessible. He also revealed one crypto whose price he thinks will one day overtake Bitcoin. (Uh, just doing a little napkin math here, that would be at least a 20-fold increase.) Considering James was talking up Bitcoin on CNBC when it was $63… and it’s over $62,000 today… it pays to watch.

Heck, we’ll do you a favor: You can scroll directly to James’ portion of the Six Predictions Summit. Here’s the link: James starts at 1:58:10.]

The stock market is taking a breather after its monster rally late last week.

Earnings season resumes in earnest tomorrow. So far, so good — but only 8% of S&P 500 companies have reported, and they’re mostly big financial names. The real test is about to get underway.

The big economic number of the day here at home delivered a severe downside surprise: U.S. industrial production sank 1.3% during September, in contrast with an “expert consensus” expecting a small jump of 0.2%.

Every component of this number was a stinker: Manufacturing has been hobbled by chip shortages, especially in the auto industry. Mining and energy production took a hit from bad weather, including storms in the Gulf of Mexico. Utility output also fell. 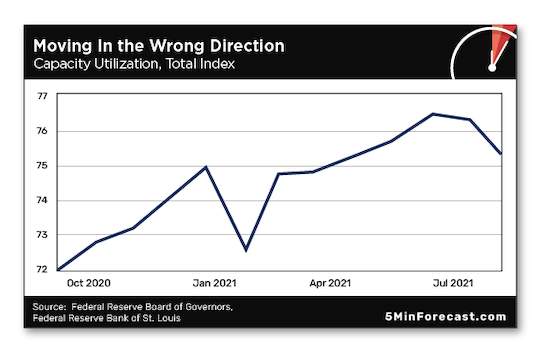 All told, 75.2% of U.S. industrial capacity was in use during September — down a full percentage point from August.

For the record: Facebook has taken another big step to ensure it gets a piece of the metaverse action.

As a reminder, the metaverse is an online world — often using virtual-reality headsets — suitable for work, communication and gaming. “A digital universe parallel to our physical universe,” as our Ray Blanco describes it.

Facebook plans to hire 10,000 people in the European Union over the next five years to develop a metaverse, including “highly specialized engineers,” per a company statement.

The plans come on the heels of FB’s pledge to plow $50 million into metaverse efforts. (In a “responsible manner,” the company was keen to add.)

But no, Facebook is not the way to profit from the trend. It’s too big and it has fingers in too many other pies. What you want is a basket of small companies putting everything into the metaverse — which is what Ray is in the process of identifying this month. Stay tuned…

Now it can be told: The too-big-to-fail banks were indeed the main beneficiaries of the Federal Reserve’s “repo rescue” in late 2019.

On Sept. 17 of that year, the market in repurchase agreements, or “repos,” seized up. Repos are short-term loans that big banks and hedge funds rely on to finance their daily trading.

The Fed stepped into the breach and issued repo loans when no one else would. Result: Six months before the pandemic hit full-bore, the Fed was already printing new money and swelling its balance sheet. 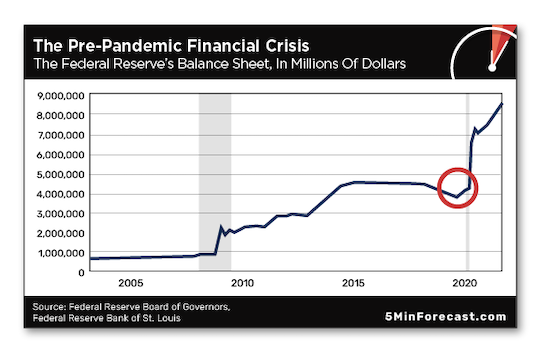 The day the rescue began, we said the official explanation didn’t add up — that corporations were withdrawing large sums from banks to make quarterly tax payments.

Two years later, we’ve got names and recipients of Fed loans. The official explanation was in fact a crock.

Instead, as Pam and Russ Martens write at Wall Street On Parade, “the fact that so many huge loans ended up going to foreign banks, as well as Goldman Sachs and JPMorgan Securities, suggests that this was a derivatives counterparty problem, potentially triggered by Deutsche Bank’s crisis at the time.”

Ah yes, Germany’s Deutsche Bank — we called it a “dead bank walking” as long ago as 2016. By 2019, its crisis was reaching full boil… and it was in hock to many other large banks.

Those are only a few daily snapshots from a very incomplete photo album. So far, the Fed has released figures only for the last two weeks of September. Figures for the rest of 2019 are due for release at the end of this year.

“It’s long past the time,” write the Martenses, “for the Senate Banking Committee and the House Financial Services Committee to get to the bottom of what the financial panic that started on Sept. 17, 2019, was all about.” Hear, hear…

Solved — the mystery of the “Potemkin” store shelves.

In recent days, the following two photos have been circulating widely on social media… 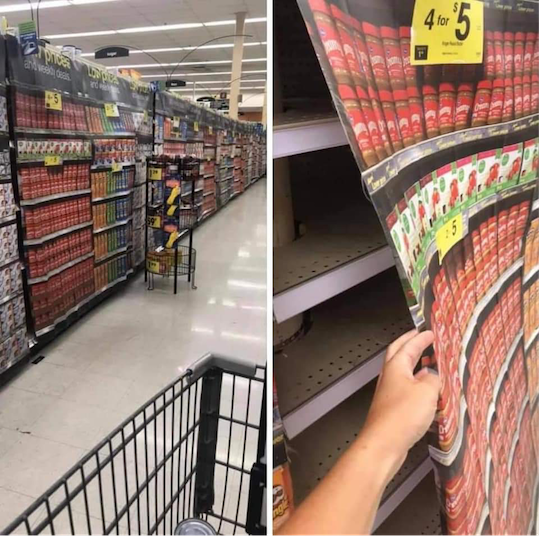 They’re presented as a sorry “sign of the times” image of what the world has come to amid snarled supply chains.

But if you think about it logically for a moment, it makes no sense. Why would a store create the illusion of plenty in the face of scarcity? Isn’t that a sure-fire way to alienate customers?

Near as we can tell, the phony shelves were created to temporarily accompany the remodel of a Kroger store in Ohio back in 2018; there’s a Flickr account with a bunch of similar photos.

In the meantime, some clever Photoshoppery has lent a new twist: In that second photo, you sometimes see the three empty shelves labeled sequentially as “Let’s,” “Go” and “Brandon.”

To the mailbag, where we hear about vaccine mandates from someone who works for one of the major defense contractors…

“They just came down with a vaccine mandate of Dec. 8 as well (which would require one to receive the jab much earlier than that date, two weeks or so).

“The tone and attitude around the company has suddenly become very heavy. A high-level manager over my group of 100–200 people outright told us that they were losing sleep over the mandate because there are groups within the company that have 60% of people who either still refuse to report their vaccine status or report as unvaccinated. They said they’re not sure how things will work after the enforcement starts.

“We’re a little different than Southwest in that we’re told to use our PTO after Dec 8, rather than before.

“If we have a considerable portion of the military walk out, and a large portion of the workforce that designs and builds the military’s cutting-edge technology, what comes next? Are China and Russia going through a similar problem? And if not, it suddenly makes more sense if a hostile nation designed the virus because they knew it would lead to this.

“Not destruction of the USA by the virus itself, but destruction by the division over those who still believe in freedom of choice and those who don’t. Something to think on.”

The 5: Seems as if U.S. leaders are perfectly capable of executing “divide and conquer” tactics without any foreign help, but that’s just us…