Or as a BuzzFeed News article notes: “And perhaps [de-emphasize] years upon years of bad press.” Ya don’t say…

Of course with Facebook contemplating a rebrand, social media’s atwitter with possibilities… 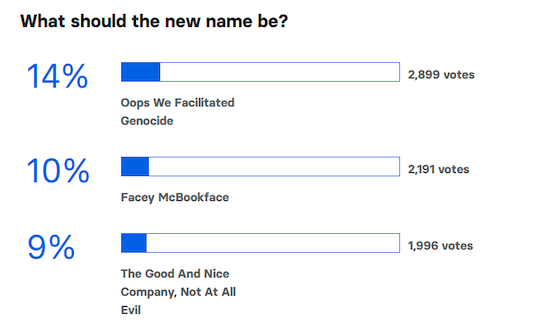 Some of our other favorite contenders? Definitely NOT Facebook… Myspace… and this deep cut: Mark Zuckerberg’s Zinc Sunscreen.

And since we said it (atwitter), we must mention our favorite billionaire ascetic…

“Twitter CEO Jack Dorsey has made fun of the ‘metaverse,’” says Business Insider, “a concept Facebook CEO Mark Zuckerberg has been pushing as the future of both Facebook and the internet at large.

“The ‘metaverse’ refers to a future version of the internet where, instead of accessing the web through laptops and phones, people use virtual-reality and augmented-reality devices to enter a virtual space.”

The 5’s noted before the term metaverse was coined by Neal Stephenson in his 1992 sci-fi, dystopian novel Snow Crash. A Twitter user asks then: “What if Neal was right?” Jack Dorsey answers… 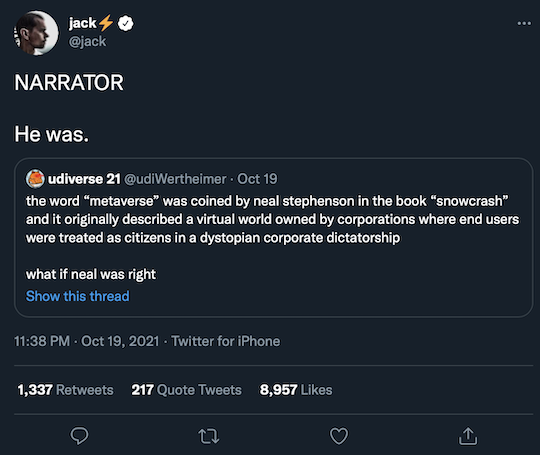 [Note: If you’re curious, “the Narrator” gag comes from the brilliant television comedy Arrested Development in which an omniscient narrator breaks the fourth wall to comment, often contradicting characters’ dialogue or actions.

It’s a trope Twitter users have been using for years. Dorsey’s tweet, however, doesn’t use “the Narrator” to great effect here.]

But Dorsey dissing Facebook’s metaverse aspirations has to be taken with a grain of salt. Dorsey and Zuckerberg have been seriously on the outs, especially since Facebook acquired Instagram — Dorsey was an early investor in the app. Plus, he was personal friends with one of Instagram’s founders. Ouch.

So Dorsey’s a little billionaire butthurt…

“There are alternative ways to work around our ‘corporate overlords’ now,” says our science-and-technology expert Ray Blanco, “and there will be then.

“Information wants to be free,” he says, “and the internet was designed to route around damage. But the ideals behind the internet are under serious attack today, and that threat extends to the future metaverse.

“Big Tech is drooling over owning and controlling it and is trying to strangle a free metaverse while it’s still in the crib,” he says. “If they get their way, we will have fragmented metaverses where you are locked into a particular vendor.

“The Zuckerbergs want to build walled gardens using closed standards where they own your data and identity.

“We don’t want a metaverse… where we are locked into a particular company’s vision, where our online personas and virtual property are dependent on some Big Tech player’s permission, where our personal data is owned by someone other than ourselves and where our interactions are subjected to censorship and control.”

“We need a blockchain-secured metaverse where you own your data and your identity,” says Ray. “We need open standards… in a global metaverse.

“We need a metaverse that levels the playing field for all comers and their crazy new ideas — like what happened when the internet gained traction in the 1990s.

“If we can get that, we can unleash a wave of innovation the likes of which we have not seen in decades,” Ray says. “And just think of the fortunes that could be made from investing in fresh new startups with great ideas that are able to operate independently.”

Ray forecasts massive potential in companies that are investing in the metaverse – publicly traded companies, startups and more. We’ll continue to follow this evolving story in the days and weeks ahead…

“Intel Corp. (INTC) is the first culprit,” he notes. “Shares tanked last night after reporting weak sales. Management says the chip shortage continues to cause problems — no real surprise there, but investors did not like what they heard.

“But the real trouble… came after Snap Inc. (SNAP) said that its ad business is hurting because of Apple’s privacy updates,” says Greg. “The stock completely fell apart in the after-hours session last night, dropping as much as 30%.” At the time of writing, SNAP is down 25%…

“The SNAP earnings surprise rippled through the tech space,” Greg explains, “slamming other social media stocks and anything associated with online ad revenue. We call these ‘sympathy moves’ — and they don’t always stick.”

“Prices paid by factories for raw materials rose at yet another new record pace,” says Chris Williamson of IHS Markit, “in turn feeding through to both higher prices at the factory gate and spilling over into higher service-sector prices. 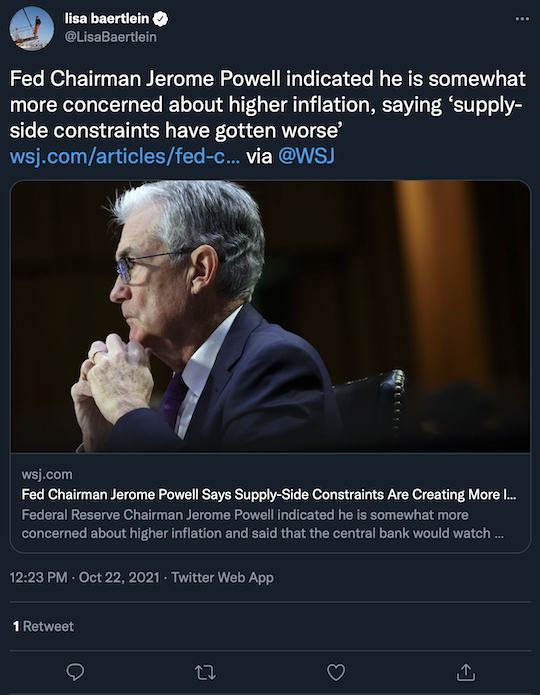 “China’s power crisis is expected to further disrupt supply chains bringing longer lead times and a preference for high-value goods,” says an article at The Loadstar.

According to CEO Jacky Yan of New Silk Road Intermodal: “With increased rates for coal and a relatively fixed electricity price, the energy firms have been losing huge amounts of money every day,” he says. “So they have the temptation to produce less electricity.

“Furthermore, winter is the dry season for the main rivers, which leads to less hydropower. Winter also means the government needs to prioritize the supply of electricity for heating and consumption,” Mr. Yan says.

Add to the energy crisis China’s new carbon emissions target: “Indeed, set out in the Made in China 2025 plan, Beijing has been heavily focused on moving manufacturing higher up the value chain and discouraging the low-value production said to be a major source of emissions.”

In just 44 days, the Federal Reserve “tightened” its ethics rules… That’s lightning-fast, by government standards, no?

A cynic might say Fed Chair Powell had no choice — if he wants to save his job come February. This after news broke (huh, like 44 days ago) about regional Fed presidents’ insider-trading shenanigans. Us? Cynical?

“The Federal Reserve announced Thursday,” says CNBC, “Fed officials can no longer have holdings in shares of particular companies, nor can they invest in individual bonds, hold agency securities or derivative contracts.” In other words, mutual funds only…

“Under the new rules, the officials will have to provide 45 days’ notice in advance of buying or selling any securities that are still allowed,” CNBC says. “They also will be required to hold the securities for at least a year, and they cannot buy or sell funds during ‘heightened financial market stress.’”

“These tough new rules raise the bar high in order to assure the public we serve that all of our senior officials maintain a single-minded focus on the public mission of the Federal Reserve,” says Fed Chair Powell.

In October 2020, we reported Buffalo Bill’s house from TheSilence of the Lambs was on the market. This year? The house from A Nightmare on Elm Street is up for sale… 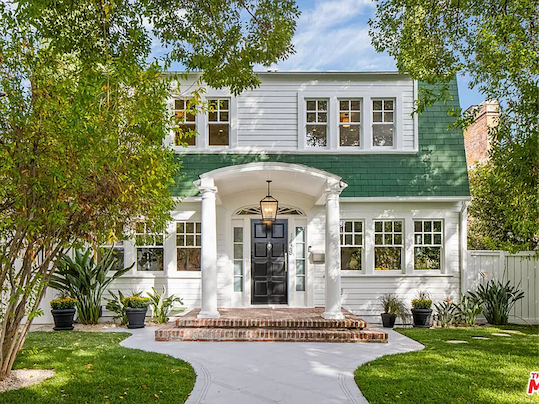 One, two… Freddy’s coming for you!

But this 2,700-square-foot Dutch Colonial-style house — which includes three bedrooms, five bathrooms plus a pool and guest house — isn’t on Elm Street; instead, it’s located on North Genesee Avenue in Los Angeles.

According to the Zillow listing: “This elegant traditional [house] was reimagined by an English designer in the mid-2000s, lovingly lived in by the current owner and a location for some of Hollywood’s favorite films, commercials and print.

Take care, and enjoy the weekend… We’ll be back Monday.