Really, now? A little over 40 years ago, Federal Reserve chairman Paul Volcker choked off 14.8% inflation by jacking up the fed funds rate as high as 20%. Yes, it threw the economy into a wicked recession… but it worked.

And while the official inflation rate is nowhere near 40-year highs, it is at 31-year highs.

This morning, the Labor Department regaled us with the Consumer Price Index. The month-over-month jump was way more than expected — 0.9%. That translates to a year-over-year inflation rate of 6.2%. 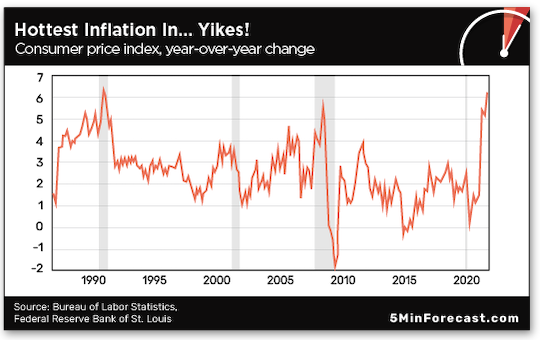 That’s the highest level since November 1990 — when Iraq’s invasion of Kuwait had sent oil prices zooming higher, when Home Alone was the big box office draw and when Mariah Carey topped the charts with “Love Takes Time.” (And you thought life sucked then, huh?)

As we’re wont to remind you, the official inflation rate seldom reflects your true cost of living. The real-world rate from Shadow Government Statistics — calculated with the same methodology the government used 40 years ago — is running 14.3%.

So let’s think this through for a moment…

When the inflationary crisis of the 1970s came to a head in the fall of 1979, inflation was running 12.2% — almost a full percentage point higher than the fed funds rate of 11.4% And that was thought to be such an emergency that Volcker imposed a shock interest-rate increase on a Saturday night.

Before all was said and done, Volcker pushed the fed funds rate five percentage points higher than the inflation rate. Again, stiff medicine but it worked.

Today? Official inflation is running 6.2% while the fed funds rate is near zero — a yawning chasm more than six times the size of the 1979 gap that prompted emergency measures..

Likelihood of the Fed doing something comparable to what Volcker did? We’d say it’s somewhere between slim and none… but in this case Slim never even came to town much less left it.

It’s too soon to tell whether 1970s-style inflation is in store… but it’s not too soon to say Ms. Yellen is delusional.

Back to the numbers today: Even the “core” inflation rate excluding food and energy is running much hotter than expected at 4.6% year over year.

Government types love to point to the core number because it’s usually lower than the headline number, and they justify it by saying food and energy prices are “volatile.” (Never mind you have to eat and drive, volatility or no.)

Among the non-core categories that stand out are used vehicles — up 2.5% in just one month, along with a jump of 1.4% for new vehicles.

As you’re likely aware by now, the main factor driving up auto prices is the supply-chain fiasco in general — and the shortage of semiconductors in particular. You can’t build a modern car without chips, in vast quantities.

We’ve devoted much of our digital ink this week to the chip shortage. And for good reason: “The shortage of silicon remains an ongoing issue that affects many industries,” says our tech-investing specialist Ray Blanco.

“A recent report shows that finished chips are taking longer and longer to deliver, reaching 18 weeks this past May.

“It’s worse for some kinds of chips than others. Ones used to regulate power are taking nearly half a year to deliver at this point. Since these chips are used in just about any electronic product, the impact is broadly felt.

“Chipmakers are scrambling to bring new capacity online. Automotive component supplier Bosch recently opened a $1.57 billion plant in Dresden, Germany. The 65-nanometer manufacturing process, however, is so out of date, it makes me wonder what the point might be. This process node was cutting edge in 2005, more than 16 years ago.

“Many big chip foundries are predicting we’ll remain in shortage mode for a year or two more at least. GlobalFoundries thinks we’ll be heading out of the woods in 2022. Intel thinks the situation will linger until 2023.

“One thing, though: With tech set to grow at a huge rate this decade, the longer-term demand for advanced chips will remain for years to come.”

The stock market is shrugging off the inflation numbers… while as you might expect, select non-dollar assets are soaring.

At last check, the major U.S. stock indexes are in the red, but not by much. The Nasdaq is the biggest loser, down half a percent to 15,809.

Thanks in part to inflation, the mood in small-business America has slumped to its lowest level in seven months.

The monthly Optimism Index from the National Federation of Independent Business tanked nearly a full point in October to 98.2.

“Small-business owners are attempting to take advantage of current economic growth but remain pessimistic about business conditions in the near future,” says NFIB Chief Economist Bill Dunkelberg. “One of the biggest problems for small businesses is the lack of workers for unfilled positions and inventory shortages, which will continue to be a problem during the holiday season.”

For sure, good help is still hard to find. “Quality of labor” continues to top the always-revealing part of the survey where business owners are asked to identify their single most important problem.

That said, it’s cited by 24% of survey respondents — which is down from a record high 28% the month before. What accounts for the drop? 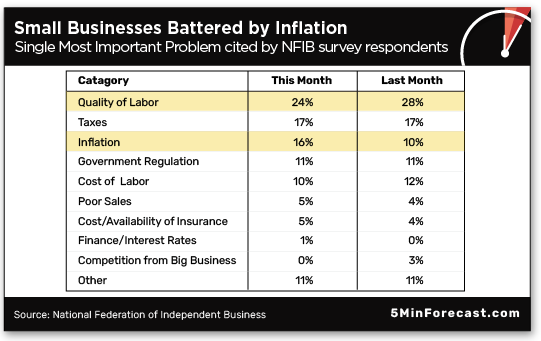 Yeah… Inflation is shooting higher — cited by 16% of survey respondents, up from 10% the month before.

Not that it’ll do anything to solve the shipping snags, but three major West Coast ports are now issuing additional fines to logistics companies that can’t unload cargo.

“Following announcements of levies at Los Angeles and Long Beach,” reports The Loadstar, “the practice is now coming into play at Tacoma, with one forwarder expecting carriers to pass on charges and customers will refuse to pay them – leaving forwarders between a rock and a hard place.”

Containers left at the terminals in Tacoma face a one-time charge of over $300 after 15 days. That’s on top of $230-per-day late fees after four days.

The Loadstar cites Craig Grossgart of the firm Seko Logistics as saying there was never any doubt the ports would impose these fees. But he adds matter-of-factly, “Carriers are not going to absorb them.”

That could get interesting…

“Whither Reddy?” a reader writes after we noted yesterday that General Electric is breaking up into three companies.

“A question on the minds of many of us boomers who grew up in the 1950s is: Which new company gets Reddy Kilowatt?” 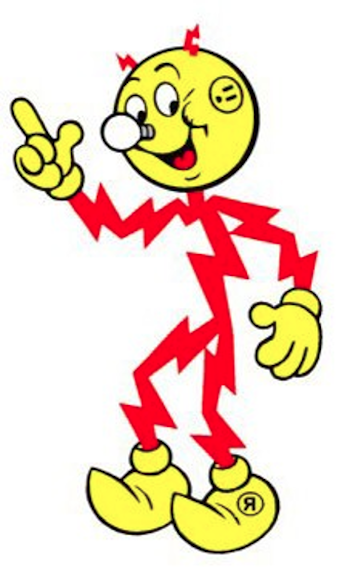 The 5: Interesting that you remember Reddy Kilowatt as a GE thing… because GE shows up nowhere in the Wikipedia entry about Reddy Kilowatt. However, a web search reveals GE did turn to Mr. Magoo to sell GE light bulbs in the early ’60s.

(Sorry, your early-wave Gen-X editor is a bit young to remember any of this from personal experience.)

Per Wiki, Reddy Kilowatt made its debut in 1926 on behalf of Alabama Power Co. By 1933, it became the representative of all investor-owned utilities under the umbrella of the Edison Electric Institute. The image most boomers remember is the one our reader dug up, designed in 1946 by the animator Walter Lantz — the fellow behind Woody Woodpecker.

Considering how Reddy Kilowatt was created to encourage electric consumption in both the pre- and postwar years, it’s not surprising he was slowly put out to pasture once the 1970s energy crisis hit and conservation became the name of the game.

Which reminds us once more about daylight saving time and its uselessness in curbing energy consumption. We’ve had fun for several days with this topic in our mailbag, and we have one more contribution from a reader overseas.

“Here in France, Martial Gitenet is a very reputable alternative medicine specialist (some doctors even send him their incurable patients),” the reader writes.

“He noticed that each time change wreaks havoc on biorhythms: Consequently, many serious diseases are triggered within a one-month span.”

The 5: Indeed. The Wall Street Journal had an interesting piece a year ago, when the work-from-home crowd found time change was taking an even bigger toll than usual.

“The fall-winter clock, known as standard time, is closer to the sun’s natural rise and set, meaning it is more aligned with our internal clocks that tell us to sleep at night and wake at daylight,” wrote reporter Ray A. Smith.

“When clocks spring ahead in March and daylight lasts longer in the evening, the cues to go to sleep come later than our biological clocks are accustomed to, says Till Roenneberg, a sleep researcher and professor of chronobiology at the Ludwig Maximilian University of Munich.”

Yeah, spring time change is way harder than fall. Best to take it as easy as you can the second weekend of March…