“On the flatbed trailer, thick straps hold down massive metal boxes. It’s the next-gen fueling system that the rest stop is adding,” he says. “Most folks will never see these massive hunks of metal and green paint. And heaven knows they won’t have a clue how they work.

“As you may have guessed, this new fueling system isn’t some kind of faster way to pump 87 octane into your gas tank. Instead, the gigantic metal boxes showing up at filling stations, shopping centers and rest stops all across the country are transformers.

“These enormous transformers convert line power from the alternating current used in homes and businesses to the direct current that gets sucked down by electric vehicle (EV) batteries.

“As we speak, transformers, charging stations and other infrastructure are being delivered all throughout the country,” Ray says, to remedy “one of the biggest hurdles to EV adoption.

“The allure of plugging in at home and waking up each morning to a fully fueled vehicle might work for 90% of the people 90% of the time, but it’s the less common scenario that keeps people from pulling the trigger: What if you need to take a trip a state or two over?

“Fully baked long-distance charging infrastructure is the final piece of the puzzle for many EV-curious car shoppers.

“But one problem with the current EV charging infrastructure is that it’s incredibly concentrated,” Ray says. “The semi trailer full of transformers pulling into the filling station in St. George, South Carolina? That’s Tesla’s proprietary Supercharging system,” he says.

“According to data compiled by EVAdoption.com, Tesla’s proprietary connector is found at nearly 40% of fast chargers in the U.S. today.

“But that’s changing,” says Ray. “Tesla has been a powerhouse in the EV business, but conventional automakers are finally making meaningful investments in electric. 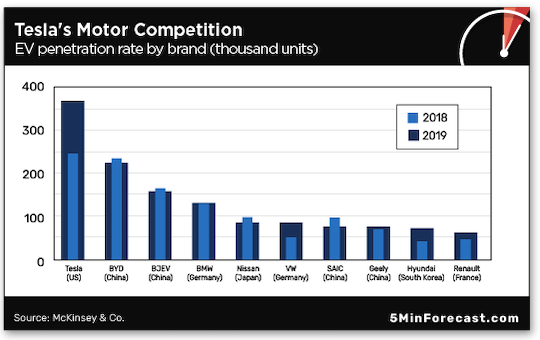 “One way these automakers can catch up is by joining forces on the charging front and doubling down on investment in standardized chargers along major highway systems,” he says. “That’s precisely what’s happening.

“You’ll see chargers manufactured, owned and operated by a handful of new charging infrastructure companies. Think of them like the gas station brands that dot the highways today,” Ray says. “Much like with gas stations, this isn’t a winner-take-all market.”

Ray’s take: “I expect that several electric charging networks will be winners from the electrification of the nation’s highway network.”

The solution is what Ray’s calling “Project I.C.S.” — that is, Project Interstate Charging System.

“Everyone from automakers to the feds is devoting substantial resources to Project I.C.S. over the next several years,” he says.

“And growth is happening rapidly,” he continues. Consider this: “Around 10% of new vehicles sold in the U.S. and Europe by 2025 will be electric. By 2030, it’ll be nearly one in three!” There’s even a new “Big Three,” representing a shift among automakers… 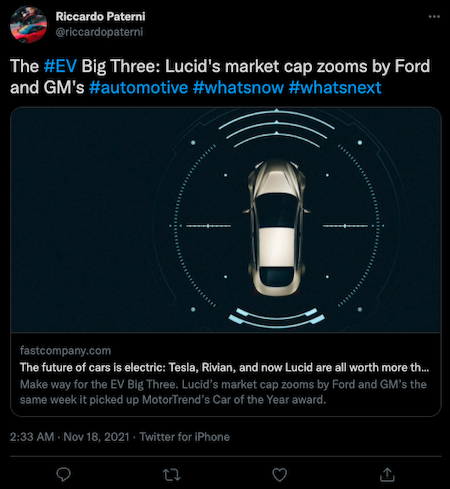 “Tesla, Rivian and Lucid are all worth more than Ford and GM,” said an article at Fast Company just yesterday. But EV makers are risky (Lucid has yet to turn a profit, for example). Compare that with the rocket-ship potential of I.C.S. names which provide an essential service… without which EV makers are lost.

This week? Ray says the I.C.S. stocks he’s eyeing are all up… after Biden signed $1 trillion in infrastructure spending that earmarks $7.5 billion to the EV-charging grid. “And EV makers will be spending billions more,” Ray adds. But there’s still plenty of headroom for investors…

How about those chipmakers? Nvidia shares are soaring over 10% after the company reported banner earnings with sales and revenue beats. “The chipmaker saw a 55% gain in data center sales from the same period a year ago and a 42% increase in gaming, its biggest market,” CNBC says.

Nvidia must be the rising tide because chipmakers including Advanced Micro Devices (AMD), Qualcomm (QCOM), Micron Technology (MU) and GlobalFoundries (GFS) are all getting a lift.

“Investors have long seen a spot Bitcoin ETF as a milestone in crypto’s breakthrough to mainstream investing,” says an article at CoinDesk.

On Monday, we reported VanEck’s much-anticipated Bitcoin ETF — based on the spot price of Bitcoin instead of Bitcoin futures — got the banhammer from Gary Gensler’s SEC.

“[The SEC] followed a long-standing tradition of stonewalling any and every physically backed crypto ETF product,” the article says. “That history began in summer 2018 with the Winklevoss twins falling flat. Three-plus years later and the song remains the same.”

Notwithstanding, other countries have leapfrogged the U.S. with their own Bitcoin ETFs… 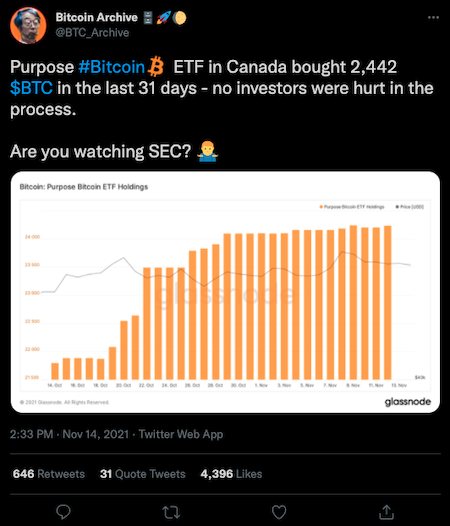 “The ETF industry here has always been cutting-edge,” says Spencer Barnes of Raymond James, Toronto. Canada, in fact, was the birthplace of ETFs…

“Canada is again leading the way with cryptocurrency ETFs,” says The Globe and Mail, “including the launch in February of the Purpose Bitcoin ETF [BTCC].”

“With BTCC — a Canadian-dollar, non-currency-hedged ETF — investors still own actual Bitcoin,” the article says, with “one key benefit” (depending on how you look at things). Investors aren’t required to take custody of their own crypto. Meaning? No crypto wallet, no keeping track of passwords, etc.

“Another upside to BTCC… is that, as an ETF, it can be held in a registered retirement savings plan (RRSP) and tax-free savings account (TFSA), whereas Bitcoin and other cryptocurrencies are ineligible.”

As for the ETF’s popularity? “BTCC is currently the largest Canadian-listed ETF, with about $1.1 billion in assets under management.”

But Mr. Gensler’s saving you from yourself… Despite that, our own crypto investor James Altucher is putting the final touches on something that’ll help make you a crypto expert. Stay tuned…

“President Biden says he’ll announce his choice to lead the Federal Reserve… by the end of this week,” says a staff Op-Ed at TheWall Street Journal titled, “Tweedledum and Tweedledee at the Fed.”

The top candidates are current chair Jay Powell, of course, and Fed governor Lael Brainard. The WSJ notes: “This reminds us of Hillary Clinton’s famous formulation in response to the Benghazi debacle: ‘What difference, at this point, does it make?’”

Wow. How the mainstream turns on its own…

“Mr. Powell has run the Fed for four years and was appointed by Donald Trump while Ms. Brainard was a Barack Obama choice,” the article continues. “But on monetary policy they have been conjoined twins over the last four years, and both have presided over an inflationary surge with nary a public dissent or reconsideration.

“Either one will continue a dovish monetary policy unless the markets force their hand.”

What’s interesting is Biden’s appointment is very late by traditional standards; Trump appointed Powell on Nov. 2, 2017. Here we are one week away from Thanksgiving…

The times they are a-changin’: On Monday, House Republicans introduced legislation to federally decriminalize marijuana and protect cannabusiness in legal-weed states.

Spearheaded by Rep. Nancy Mace (R-South Carolina) and five other Republicans, the bill — simply titled the States Reform Act — “would defer to state authorities on matters of prohibition and regulation,” Reuters reports. Mace calls the bill a “compromise” with fewer stipulations than Dems’ earlier proposals.

“This bill would… support businesses, in particular small businesses. That’s very important,” Mace says. “If we were to pass this bill today… businesses would operate and be legal and regulated just like alcohol.”

Like alcohol, the bill would set the legal age for recreational use at 21 but grant marijuana’s oversight to the Alcohol and Tobacco Tax and Trade Bureau. (Medical marijuana would fall under the FDA’s purview.)

While the bill is seen as a concession to Democrats, the bill’s content is distinctly different from Dems’ on at least one front: “Mace’s bill would impose a 3% excise tax on cannabis, compared to an increasing Senate tax proposal that would top out at around 25%.”

The bankrupt subscription movie-theater experiment MoviePass must have nine lives…

“The company — famous for once offering unlimited movie tickets for the too-good-to-be-true price of $10 a month — shut down in September 2019 after it could no longer afford the deals it was offering subscribers,” says the New York Post.

Meanwhile, the market gave up on MoviePass parent Helios & Matheson Analytics more than a year before that.

“MoviePass co-founder Stacy Spikes was granted ownership of the company by a Southern District of New York bankruptcy court judge who approved the sale on Monday,” according to Business Insider. “The financial transaction took place on Wednesday.” For an undisclosed amount…

“I can confirm that we acquired MoviePass out of bankruptcy on Wednesday,” Spikes says. “We are thrilled to have it back and are exploring the possibility of relaunching soon.

“Our pursuit to reclaim the brand was encouraged by the continued interest from the moviegoing community. We believe, if done properly, theatrical subscription can play an instrumental role in lifting moviegoing attendance to new heights.”

“I’m proud to be a fan of The 5,” a reader says about Monday’s issue. “Prouder still after Emily’s knockout punch of the ‘What complete bullcrap!’ reader. Made my day! Thanks.”

Happy to provide a little light and levity… You all take care, and we’ll be back tomorrow.