Nothing like new lockdowns to put inflation back in its box, right? Well, at least until the effects of an even more fouled-up supply chain make themselves evident.

So let’s back up a bit: After we went to virtual press on Wednesday, expecting a quiet holiday weekend, a couple of seemingly unrelated events took place later that afternoon.

First, the Federal Reserve issued the minutes from its meeting held on Nov. 2–3.

The gist was a way-too-late acknowledgment that “Golly gee, inflation isn’t receding in the way we expected a few months ago.” Thus, we’re told some of the Fed pooh-bahs advocated a faster pace of “tapering” back on the Fed’s bond purchases — beyond the $15 billion a month taking place now.

Meanwhile, the World Health Organization announced it would convene a panel the next day to review the emergence of a new COVID-19 variant detected in South Africa.

No one really perked up at the announcement. There are a dozen or so variants, after all, most of which you’ve never heard of.

Fast-forward to Friday morning: The governing classes and their media mouthpieces were engaged in a collective global freakout. 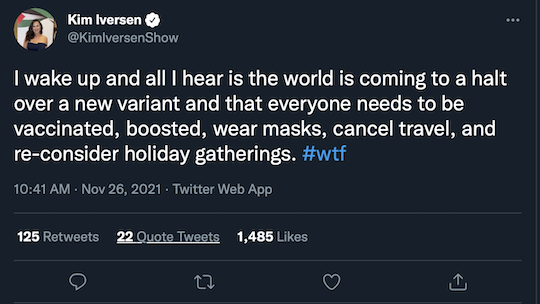 To say nothing of the U.S. stock market getting a 2.5% haircut and oil prices whacked 13% in a day.

Meanwhile, South Africans were scratching their heads. By all accounts, the symptoms are mild — which is what you’d expect from a new variant, given the mutation history of every other coronavirus in history. And that’s despite South Africa’s vaccination rate of only 24%. (The U.S. vaccination rate is 59%.)

No matter: Within hours, the U.S. president declared a travel ban from eight sub-Saharan African countries. 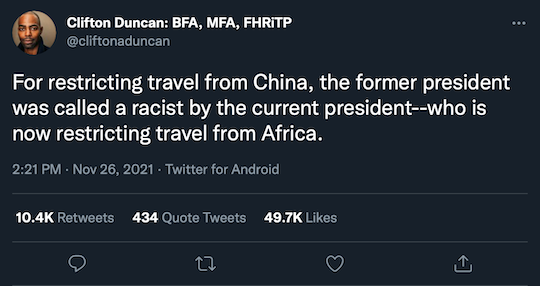 Regardless of political party, travel bans don’t accomplish a damn thing other than make politicians look as if they’re Doing Something! and Being Decisive!

Meanwhile, everyone diagnosed with the new variant up to that point had been on an international flight. It’s mighty hard to fly internationally these days without being vaccinated — or in rare unvaccinated instances testing negative before boarding.

Still, the control freaks and power trippers doubled down on their insistence that stopping the spread can be accomplished only by… imposing ever-tighter vaccine mandates.

And it’s by that twisted logic that while the stock market cratered on Friday, shares of Pfizer rallied 6% and Moderna raced up 21%.

Well, that and the promise of a new-and-improved vaccine within 100 days. (Why the rush now when there was zero urgency as Delta broke out?)

Which brings us back to the market impact: Under the circumstances, the conspiracy-minded are starting to look rather level-headed. “This was all by design,” says one fellow. “Central planners will do anything to keep this Ponzi up and running.” 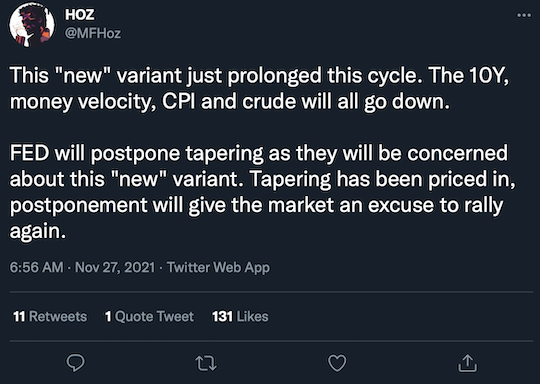 Sure enough, Treasuries were the only safe haven on Friday — prices up, yields down. The yield on a 10-year T-note fell to 1.49% — coincidentally or not, the steepest drop since the scary days of March 2020.

Travel bans surely set the stage for lockdowns… which are anything but inflationary. So yes, if we’re echoing March 2020, we’re looking at consumers getting frightened and tight-fisted. (That’s what slowing “money velocity” is all about.) Certainly it would put a hurt on demand for oil.

The Fed meets next on Dec. 14-15, a little over two weeks from now. A suspension of tapering looks mighty likely — at least looking from our vantage point in late November. And yes, that would be fresh rocket fuel for the stock market.

But to say “it was all by design” as if cooked up by some Smoking Man figure from The X-Files?

That’s giving these clowns too much credit.

Besides, if the past is prologue, the boomerang effect is going to be vicious. Inflation would retreat, only to roar back stronger than ever.

From the Reuters newswire: “U.S. Commerce Secretary Gina Raimondo said on Monday that it is too soon to tell if the new COVID-19 variant Omicron will have any impact on global supply chains.”

Voice of narrator: It will.

Per MarketWatch, Asian shipping stocks rallied hard today — Cosco leaping 11% on the Hong Kong exchange. “Lockdown measures in one country will ‘affect the whole supply chain,’ Daiwa Capital Markets analyst Kelvin Lau said, adding that ‘freight rates will be rallying quite a lot’ due to the disruptions.” 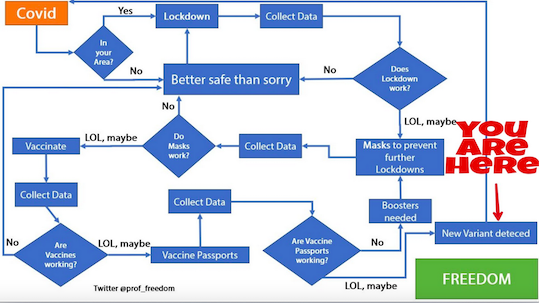 Well, as we said way back in March 2020, there’s no way in hell the powers that be will let us go “back to normal,” vaccines or no.

Not surprisingly, the U.S. stock market is enjoying an oversold bounce as the new week begins.

Shortly before the open, Twitter founder Jack Dorsey announced he’s stepping down as CEO. Hilariously, TWTR shares opened up nearly 6% on the day… but now they’ve given it all back and then some.

Crude is bouncing even harder than the stock market — up over 4% as we write and back above $71.

Cryptocurrencies were not spared from Friday’s sell-off, but they too are bouncing back today.

At $58,700, Bitcoin is very near the highs it registered on Thanksgiving Day before the WHO announcement. 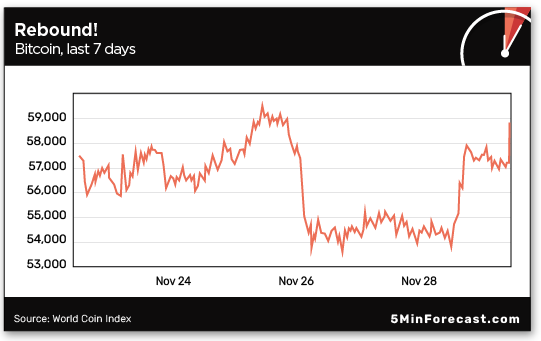 A chart of Ethereum looks nearly identical, the current price $4,446.

If cryptocurrency seems like too risky an asset class for your retirement… the managers of an Australian retirement fund beg to differ. Sort of.

Australia is home to “superannuation,” a sort of mandatory 401(k) program. And one of the companies administering the program, called Rest Super, is looking at investing in crypto.

“The fund has more than $46.8 billion worth of assets under management and around 1.8 million members,” says an article at Coin Telegraph.

Rest Super’s chief investment officer Andrew Lill promised to take it slow during his firm’s annual meeting last week: “It’s still a very volatile investment, so any allocation exposure we make to cryptocurrencies is likely to be part of our diversified portfolio as initially a fairly small allocation that may, over time, build.”

A Rest spokesperson dialed up the caution even more after the meeting: The firm is researching carefully but won’t invest in crypto “in the immediate future.”

Sooner or later, they’ll pull the trigger. As will many pension funds, in Australia and elsewhere. What choice do they have in a world where fixed-income investments return squat? They’ve gotta make up the difference somewhere.

During this exclusive event, James revealed a subniche of cryptocurrencies set to ride alongside a 9,900% industry boom over the next five years. He has the same level of confidence with this call as he did when he was talking up Bitcoin on CNBC in 2013 — then only $118.

But all good things must come to an end: Access to this summit expires tonight at midnight. Watch it now while you still can.]

Behold, a chunk of gold that’s worth way more than its bullion value… 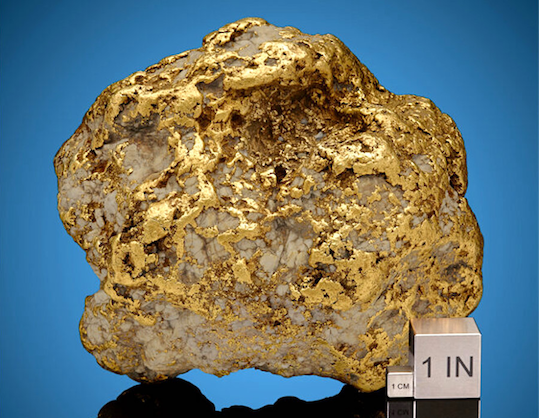 The Centennial Nugget, with helpful comparative measurements both English and metric [Photo from Heritage Auctions]

The Centennial Nugget — all 20 pounds of it — was found in the same general area that was home to the Klondike Gold Rush of the 1890s… except as the story goes, it wasn’t found until a century later, when prospector Barry Clay came upon it as he was moving dirt with a bulldozer near Ruby, Alaska.

Clay sold it soon after… and now the owner is ready to part with it. The rock goes up for auction 10 days from now.

The auctioneers figure it could go for nearly twice that. We’ll let you know how it turns out.

As long as we have market volatility on the mind, we turn to a reader in our mailbag who doesn’t fit our usual profile…

“I’m an Italian 18-year-old boy, and despite my young age I’m interested in gaining understanding of the main problems of our world, things that can’t be done by just following the traditional media.

“I appreciate so much the work you do!

“Moreover I have a question: After having seen Jim Rickards’ presentation, I thought that he was absolutely right in predicting a major sell-off of stocks. And in that presentation he talked about the crashes of the past: 1929, dot-com bubble, 2008 and the corona crash in 2020.

“In each of them the market went down almost vertically for at least two days, so my question is: Is it probable that we’ll see a Bloody Monday?”

The 5: We’re sorry we didn’t see your inquiry until this morning. Obviously that’s not how it’s shaking out. As noted above, there’s an oversold bounce, which isn’t very surprising.

But if the market is going to experience an echo of March 2020, no matter how faint, today’s bounce could prove to be of the “dead-cat” variety. And even if it doesn’t, it pays to prepare for Jim’s scenario.