“Folks have been predicting that electric vehicles were the way of the future since they first started appearing in the 19th century,” says our technology authority Ray Blanco. 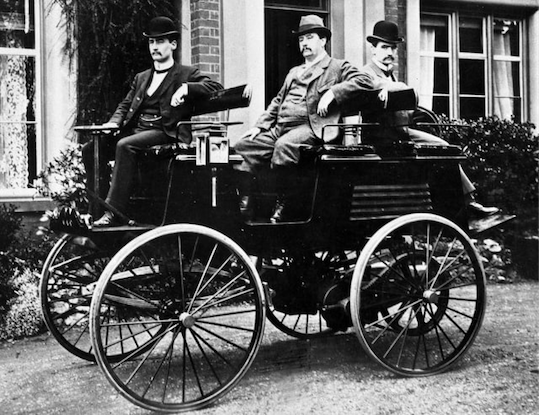 “But there’s been a single problem when it comes to mass adoption,” says Ray. “Up until recently, batteries have been too big… too heavy… too expensive… too weak… too fragile…and/or too hard to recharge to make them practical for everyday automobiles.

“Today, engineers have solved most of those problems, producing batteries that make electric cars a viable alternative to fossil-fueled ones,” he says, “by making batteries smaller, more powerful, more convenient and, most importantly, as inexpensive as possible.”

Ray notes: “The battery market alone is slated to grow by double digits per year, topping $85 billion by 2025.

“Meanwhile, the batteries for electric cars have become so inexpensive and reliable that the electric vehicle market overall is expected to become larger than that for traditional vehicles by 2040.

“That’s assuming battery development stays on its current path,” Ray says. “It doesn’t take into consideration a major development like the one Elon Musk has promised. Who knows Tesla is toast, unless…

equip his Teslas with a million-mile battery,” Ray continues. “To be clear, Musk is not saying the battery will run for a million miles without charging. Instead, he’s talking about the battery’s overall longevity.

“Current electric-vehicle batteries only have an eight-year or 50,000-mile warranty on them,” he says. “They’re expected to run for as many as 500,000 miles. Past that, they may no longer be able to hold a charge — meaning electric car owners will have no choice but to

“That might not sound like a big deal,” says Ray. “Most folks only drive about 13,500 miles a year. But truckers, taxi drivers and more could hit that limit much faster, which might make them reluctant to switch to electric vehicles.

“So obviously, a battery that can keep charging and recharging up to a million miles,” Ray concludes, “will be a major game-changer.”

[Note: Ray’s eyeing one small company with a patented manufacturing technology that could upend the battery industry.

Plus, the company can engineer low-cost batteries while creating less of an environmental impact than current methods. Pretty incredible…

Added bonus: The company already publicly lists about a dozen high-profile customers… with how many more waiting in the wings?

Ray says: “The potential is so incredible that I cannot believe anyone can still pick up shares for under $9.” To learn more, get started right here.]

“Cryptocurrency tax compliance has historically been poor, but the government is trying to get better at collection,” says an article at Forbes. Because… of course.

A provision of Team Biden’s $1 trillion Infrastructure Bill aims to collect some $28 billion in tax revenue — over 10 years — from crypto investors. “Unfortunately, lawmakers have overlooked several intricacies unique to crypto in drafting this provision.”

The policy “requires ‘brokers’ such as cryptocurrency exchanges to issue Form 1099-Bs to customers for the 2023 tax year.” The very same forms brokerages provide for customers every year, per IRS regulations, detailing annual gains and losses on stocks and securities.

But there are some in-your-face differences between traditional brokerages and crypto exchanges.

First, crypto platforms where investors buy, sell or store crypto don’t always collect know-your-customer (KYC) information, including name, address and Social Security number. (One of the guiding principles of crypto, after all, is privacy.) Not to mention many crypto investors prefer self-custody options.

Then there’s calculating “the difference between the asset’s original purchase price, known as cost basis, and the value upon sale or exchange, which can be tricky to assess,” CNBC notes.

We’ll stay on top of the situation going into 2022…

For the headline economic number of the day, the ISM Manufacturing Index reading came in at 61.1 in November — almost exactly in line with what economists’ anticipated — and up from a reading of 60.8 in October (A number over 50 indicates expansion of the manufacturing segment of the economy.)

Supply chain snarls and worker shortages remain constants, however. “Meeting demand remains a challenge, due to hiring difficulties and a clear cycle of labor turnover at all tiers,” says ISM Chair Timothy Fiore.

“Feeder operators at ports in southern China are extending service suspensions by at least six weeks over the Lunar New Year holiday due to strict quarantine measures for shipping crew,” says an article at South China Morning Post.

“Feeder operators own medium-sized ships that transport containers between small ports and major container terminals where they are loaded onto larger vessels.”

German shipping giant Hapag-Lloyd announced Friday: “This suspension is caused by the COVID-19 quarantine requirement for ship crew plying between south China and Hong Kong upon their return from the Chinese New Year 2022 holidays.” (The 16-day holiday starts on Feb. 1, 2022.)

To give an idea, at ports in northern China, crew members must quarantine for a full 21 days while ports in southern China require a 14-day quarantine.

“Many ports in China even prohibit crew from disembarking,” the SCMP says. And even after they reach their destinations to celebrate the Lunar New Year, Chinese crew members might still go through an additional two-week hotel quarantine, per local regulations.

The SCMP says: “As part of China’s zero tolerance approach to the COVID-19 pandemic, long quarantine times for sea crew have caused growing discontent among shipping firms, especially as the industry is already struggling with disruptions such as port congestion and a lack of workers globally.”

“Assume this could have further ripple effects on land-side congestion and flow of goods during the [Lunar New Year] period,” says Vice President Akhil Nair of Seko Logistics.

“By one measure, the number of containerships stuck waiting offshore of Los Angeles and Long Beach has plummeted,” says trade publication FreightWaves. “Problem solved?” the article asks. “Far from it…

“The waiting containerships are still out there — more of them than ever.” A new all-time high, in fact; as of last Tuesday, no fewer than 93 containerships were waiting for berths at the ports of Los Angeles/Long Beach.

“It’s just that more are over the horizon, where you can’t see them, thanks to the successful implementation of a new queuing system that began last week,” FreightWaves notes.

The new, voluntary system for lining up ships was designed to reduce congestion directly offshore with the stated purpose of cutting pollution and increasing safety.

“A more cynical view has emerged: that an unstated goal is to erase a politically nettlesome photo-op — attention-grabbing imagery of idle containerships stretching off into the distance.”

Well, there is that…

And speaking of rippling effects: “Because of the logistics snarl on land — at the terminals, with the trucks, the rail and the warehouses — the wait time to get from anchorage to a berth in Los Angeles is still rising. [Last week], wait time hit yet another all-time high: 18.6 days.”

“Cannabis businesses are being attacked,” says Oakland entrepreneur Amber Senter, whose own business was burglarized.

“In the past two weeks, at least 25 cannabis businesses — including retail storefronts as well as cultivation and distribution centers — in Oakland alone have been burglarized, with damages in excess of $5 million,” Forbes reports.

And according to cannabusiness owners, local law enforcement have done little to deter the crime spree, showing up late when break-ins are reported — if at all — and in one instance, appearing to stand by while a theft was in progress.

“Senter led calls Monday for tax relief and increased police presence for legal marijuana businesses, who pay the highest city and state taxes of any merchants in the city,” Forbes says.

“With an investment like that, marijuana businesses expect a return in the way of city services such as police protection.” Fair point.

[On the other hand, crime in the Bay Area is out of control in 2021. To the point where Oakland’s overwhelmed Chief of Police LeRonne Armstrong says: “Nobody should have to live through this.”]

“Omicron or Omigod?” a reader writes. “I know I’m not the first to point this out by any means — it’s all over the place — but an anagram for omicron is ‘moronic.’”

Take care! We’ll be back with more of The 5 tomorrow.