For one dazzling hour Tuesday evening, crypto HODLers were billionaires and even trillionaires… At least, on paper they were.

“Crypto data aggregator CoinMarketCap turned heads… with a website bug resulting in eye-popping figures for prices, market capitalizations and more,” The Block reports. Indeed. Bitcoin was erroneously priced around $870 billion per coin with a total market cap in the quintillions! 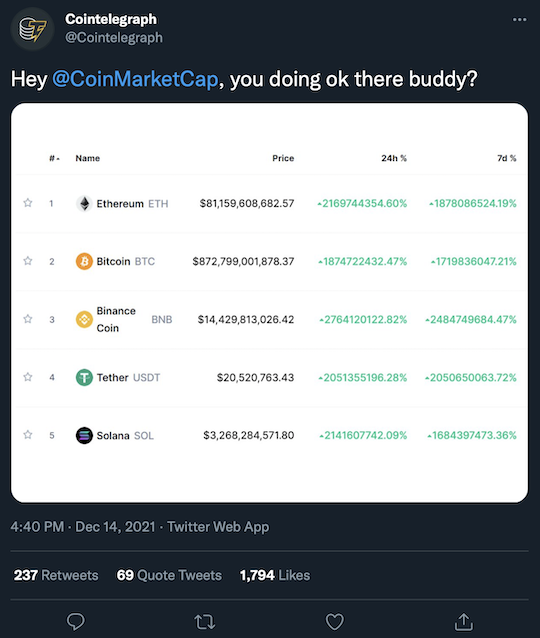 The website’s bug was live for about an hour, and at 5 p.m. EST, CoinMarketCap tweeted: “[T]he Engineering team is aware of incorrect price information… We are currently investigating and will update this status when we have more information.” A mischievous intern, maybe?

In a postscript, CoinMarketCap — which is owned by crypto exchange Binance — tweeted: “How did it feel to be a trillionaire for a couple hours?” We bet a few folks were humming “The Ballad of Jed Clampett.”

Then there’s this from across the pond…

“All seven ads or promotions were ‘banned for irresponsibly taking advantage of consumers’ inexperience and for failing to illustrate the risk of the investment,’” the BBC reports.

But the standout among the seven advertisers has got to be pizza chain Papa John’s U.K. for a Bitcoin-related promotion.

“The banned Papa John’s website promotion offered consumers ‘free Bitcoin worth £10,’ as well as telling customers: ‘Save £15 when you spend £30 or more & get £10 worth of Bitcoin from Luno!’” 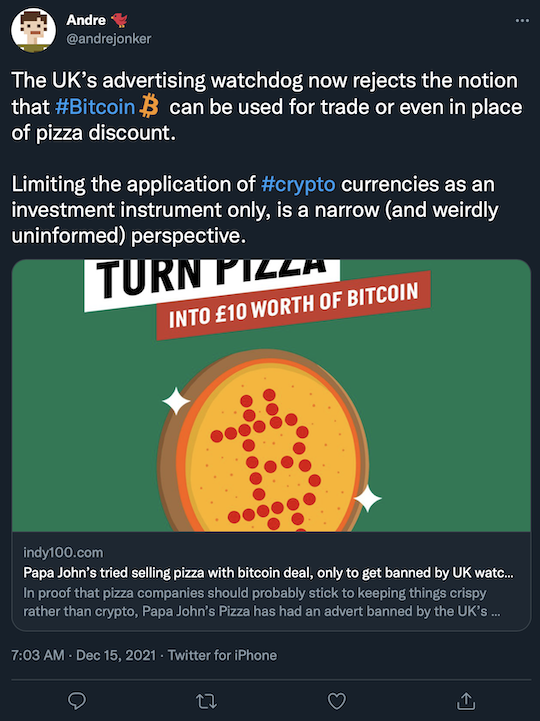 “The firm said it was part of their annual celebration of ‘Bitcoin Pizza Day,’ which is said to mark the trading of two Papa John’s pizzas for 10,000 bitcoins in May 2010.” (Worth about $462 million today.)

The pizza chain argues the “free” Bitcoin offer is pretty harmless — it’s not as if Papa John’s is offering investment advice!

But the ASA will have none of it, saying the promotion “[trivializes]… a serious and potentially costly financial decision, especially in the context of the intended audience who were likely to have limited knowledge of cryptocurrency.”

Translation? If you’re a Papa John’s customer, you must be a knuckledraggin’ dope who couldn’t possiblyhave a shred of market savvy, much less be aware of crypto’s volatility. Sheesh…

Truth is, screwups (i.e., CoinMarketCap) and volatility happen, even in more traditional markets. One example? In January this year, Elon Musk tweeted “use Signal” — an encrypted messaging app. Instead, investors rushed to buy OTC company and parts manufacturer Signal Advance, rocketing the stock price 438%. And we could cite loads of other examples…

All to say, crypto’s still the new kid on the block… Expect it to take some lumps.

[Editorial note: This afternoon, iconic crypto investor James Altucher held a live Q&A session, answering questions — related to all things crypto — that readers submitted over the past week. If you missed it, we’ll let you know as soon as the replay is available to watch!]

Our market analyst Greg Guenthner notes: “Mega-caps had been propping up the averages for weeks,” he says. “But yesterday, MSFT lost more than 3%. Some of the other FANG+ names like AAPL, GOOG, AMZN, TSLA, etc. — all finished in the red.” (More on mega-cap stocks below.)

“All eyes are on the Fed,” Greg says. “We see predictions that the Fed is going to start winding down its bond buying in order to set the table for raising rates next year.

“That’s not a secret,” he says. “What we don’t know is how the market will react if this becomes the way forward.

“We’ve already watched tech stocks pitch a fit. But is this the end of their little tantrum… or just the beginning of a bigger, broader drawdown?” And by the time you read this, the Fed will have done its thing… We’ll tease out the ramifications tomorrow.

The major U.S. economic number of the day is a serious downer. The Census Bureau is out with its monthly retail report, showing sales rose just 0.3% in November, contrary to economists’ expected 0.8% increase… and well below October’s 1.8% increase.

Econoday says: “Now the worry will be that consumer spending in the fourth quarter overall will be below expectations and contribute to softer GDP growth than presently forecast.”

Best of luck to the Fed today! Trying to stimulate growth and contain inflation at the same time…

“Mega-cap stocks posted some of the biggest gains investors have enjoyed this year,” says our income specialist Zach Scheidt. “But because of the way the S&P 500 is put together, these stocks have an oversized effect on what most people consider the market.

“The S&P 500 is a capitalization-weighted index that pays much more attention to the biggest companies. It’s heavily weighted toward the largest companies…

“So even though the index covers 500 different companies, the top five stocks alone represent almost a quarter of the entire index!” he says.

But Zach wagers you don’t buy stocks based on size, right? “Instead, you look at things like the company’s profits, future prospects and the price you have to pay to own these stocks.”

To wit, “Wall Street has a simple measure that helps us understand what we’re getting for every dollar we invest. It’s called the forward price-earnings ratio, or forward P/E.

“This measurement tells you how much you are paying for every dollar of profit a company is expected to earn next year,” he notes. “Let’s look at that list of mega-cap stocks to see what you’re paying for their expected one-year profits…

“Whenever you see a high multiple like this, two things must happen over time,” he continues. “Either the companies have to increase profits to eventually grow into their lofty valuations… Or the stocks have to come down to match what the companies actually earn.

“Because history tells us that high valuations like this are only temporary. Eventually, they always come back to reasonable levels.

“That’s why it’s so important to be in the right stocks so that your investments continue to grow,” Zach says.“In any given year, those stocks can shift from one area to the next.

“Meaning, if you buy stocks of smaller companies, you’ll pay much less for every dollar of profit these stocks are generating, which gives you two distinct benefits as an investor.

“First, buying shares at a low forward P/E reduces the risk you’re taking with your investment,” says Zach, “because you’re already buying shares at a discount. Even if earnings don’t turn out to be quite as good as expected, you’ve paid less than many investors are paying for bigger companies.

“Second, you’ve got much more potential for future profits,” he says, “because instead of companies needing to grow into their high valuations, these stocks are reasonably priced. So any growth in profits can easily push the stock prices higher.

“Add it all up, smaller stocks are statistically much more likely to have a great 2022 than the larger mega-cap stocks,” Zach concludes. “So be on the lookout for more small stocks for you to add to your watch list and invest in throughout 2022.”

The world’s largest automaker, Toyota, has been a major procrastinator when it comes to EV adoption. No longer…

Toyota’s president Akio Toyoda was candid during a recent press conference: “I wasn’t interested in Toyota’s EVs until now. But now I’m interested in future EVs.” Got it.

Now the carmaker “aims to sell 3.5 million battery-powered vehicles annually by 2030, with the launch of 30 EV models by then in a line-up including sports cars and commercial vehicles.”

“The $35 billion… will be equally divided between car development and continuing investment in battery improvement,” FT says. On Monday Toyota announced it will be building its $1.3 billion EV battery facility in North Carolina, hiring a projected 1,750 workers.

[Our technology investor Ray Blanco sees rocketship potential in companies providing an essential service… without which EV makers are lost. The best part? There’s still plenty of headroom for investors.] 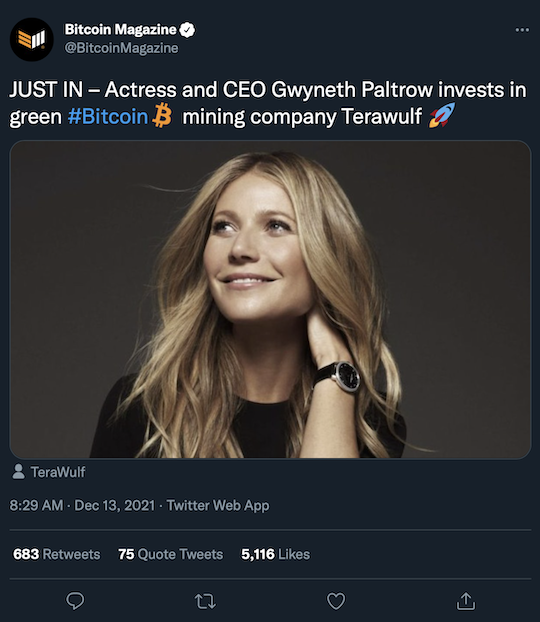 The company, which claims to mine crypto in a more eco-friendly way, made its IPO debut on the Nasdaq yesterday. After which, TeraWulf shares promptly collapsed 40%… But to be fair, “the slump comes amid a broader drop in the shares of other cryptocurrency miners,” Bloomberg says.

[Brief aside: TeraWulf’s ticker (WULF) reminds me of Ryan’s “Wuph.com” from the television comedy series The Office. And if you’re not a fan… Well, gimme a minute.]

Oh, hey, The Office actress and writer Mindy Kaling is another TeraWulf investor!

You all take care… We’ll have more of The 5 tomorrow.