Thanks for the Advice, but No Thanks

“[Turkey’s] lira has lost more than half its value this year, wiping out much of Turks’ savings and triggering sporadic protests,” says an article at The Wall Street Journal.

On Monday alone, the currency dipped 9% to a record low of more than 18 lira to one U.S. dollar after President Recep Tayyip Erdogan pledged to cut interest rates further in opposition to the citizens who’ve been openly critical of Turkey’s monetary policy. 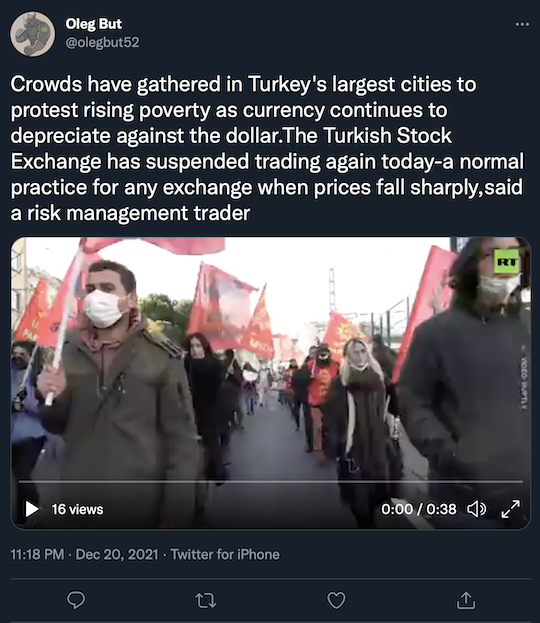 “Investors and ordinary Turks… [rushed] to trade lira for other currencies and gold during the crisis.” Also on Monday, the Turkish stock exchange halted trading in an effort to staunch the hemorrhaging.

As the WSJ notes: “The lira’s collapse is the result of four interest rate cuts in the last four months, all demanded by Mr. Erdogan.” In fact, Erdogan has fired a series of economists and central bankers who’ve forewarned hot inflation, to no avail.

“Inflation [is] well above 20% and set to accelerate further in the coming months after the lira plunged,” says Piotr Matys, analyst at InTouch Capital.

Nevertheless: “Erdogan has long railed against interest rates, calling them the ‘mother of all evil’ and insisting that increased rates cause inflation, rather than cool it down,” says an article at CNBC.

Then on Monday evening, Erdogan “revealed a plan to support the battered currency and protect local deposits against market moves,” the article continues.

In response, the lira “charged back” almost 20% in early trading Tuesday. “Despite the wild swings, the lira is still down more than 40% against the dollar year to date.”

Hard and fast details about Erdogan’s plan are questionable. “Erdogan outlined steps to guarantee savings in lira, saying the government will step in and make up losses to lira deposits if their value against hard currencies falls beyond the interest rates set by banks,” says CNBC.

Regardless, the president vowed to increase Turkey’s minimum wage too — by 50% — to offset the rising costs of inflation… In short? Erdogan’s economic-recovery plan resembles a 7-year-old’s running a curbside lemonade stand.

Our macro expert Jim Rickards cautions: “Financial conditions in Turkey are unraveling quickly.” And he had a front-row seat…

“True story,” Jim continues, “on Nov. 16, 2021, I shared the stage at the Turkish Capital Markets Summit conference in Istanbul with Turkish Minister of Treasury and Finance Lütfi Elvan. 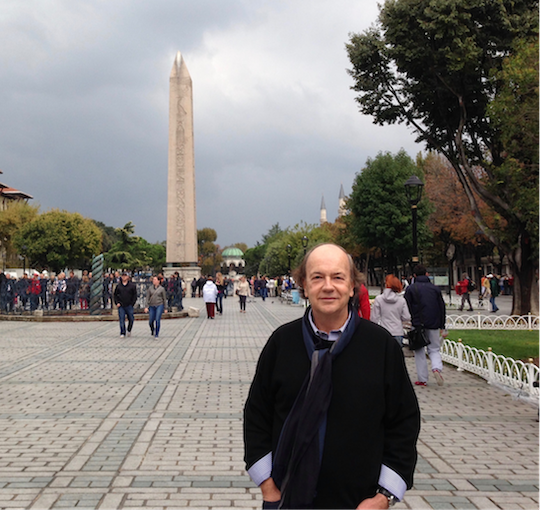 “The minister of finance gave a speech, left the stage and then I took the stage,” says Jim. “My recommendations to government officials in attendance: Turkey should raise rates to support the currency, attract foreign capital to drive exports and increase reserves.

“Instead, Turkey cut rates, trashed the currency, sank the stock market and sent foreign investors running for the hills,” he says. “The minister of finance was fired a few days later.”

Jim adds: “A currency crash of this magnitude (with no end in sight) is certain to deter foreign investment. It also leads to a run on the currency as foreign investors try to get capital out of the country.

“I [wrote] about the futility of currency devaluation and the negative impact of a cheaper currency in terms of higher import costs and imported inflation in my bestselling book Currency Wars.” Which, ironically enough, has been translated into Turkish and widely read… 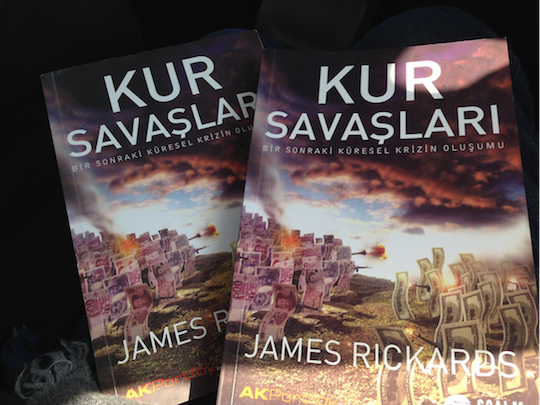 “Turkey is the 20th-largest economy in the world,” Jim says, emphasizing its global significance, “with a GDP of almost $800 billion per year, comparable in economic size to Taiwan, Saudi Arabia and Switzerland. Not insignificant, in other words…

“The government’s adherence to an experimental policy of monetary easing, despite accelerating inflation and the depreciating Turkish lira… could plunge the country into a deeper currency crisis over the next year,” says private geopolitical intelligence resource Stratfor.

Presumably, with rippling effects across the globe… Or as an astute macroeconomics observer notes some parallels: 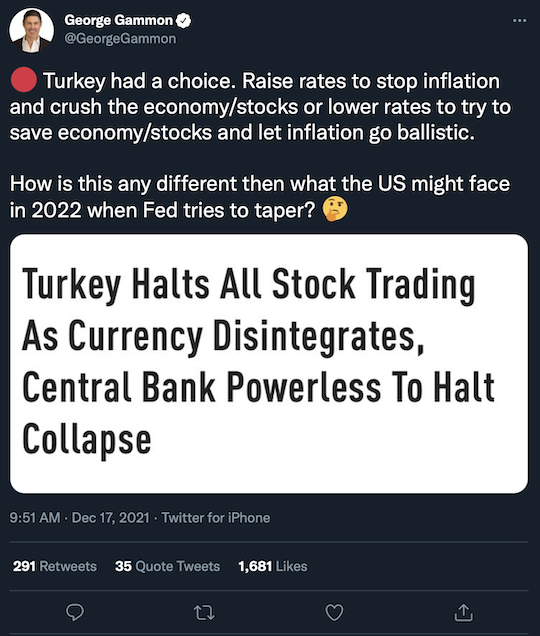 Jim concludes: “With the recent crash of the Turkish lira, foreign direct investment will take a hit and Turkish stocks will feel the effect as a result.” Our question: Will the fallout in Turkey jolt the U.S. stock market? Jim advises, brace for impact…

[Note: This type of analysis is Jim’s specialty. In 2015, when most mainstream economists forecast robust growth for emerging-market economies, Jim predicted years of chronic weakness, particularly in the Turkish lira. Yesterday, his premium subscribers parlayed the current crisis into a 70% gain inside of a month.

Tomorrow at 1 p.m. EST, Jim will be speaking on the record about what he sees as some of the biggest economic threats in 2022, including…

You’re invited to join the Zoom call too, happening this Wednesday at 1 p.m. EST. We simply ask that you register beforehand. See you then!]

Our market analyst Greg Guenthner notes: “With so many stocks and groups at critical junctures, we’re going to learn A LOT about this market very soon,” he says. “We’ll see if the action we’ve seen over the past month or so is just a routine growth stock correction or something potentially bigger.” 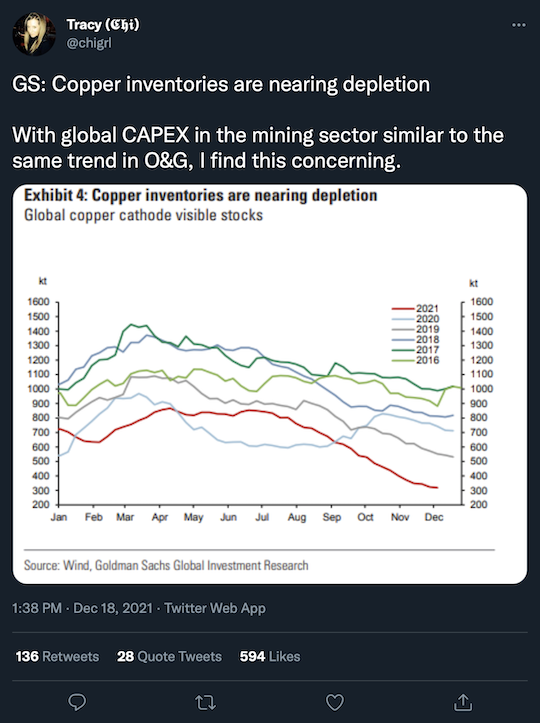 Reuters says: “The positive increments from other channels of copper demand such as EVs, renewables and electrical network investment actually outweigh the drag from Chinese property and machinery, Goldman Sachs said in a note, while raising onshore demand growth for the metal to 4.5% from 3% in 2022.

File under “Problems We Hadn’t Started to Worry About Yet”: Execs at Boeing and Airbus signed a letter to government officials, warning 5G phone service could have “an enormous negative impact on the aviation industry.”

“Concerns have previously been raised that C-Band-spectrum 5G wireless could interfere with aircraft electronics,” the BBC says.

“5G interference could adversely affect the ability of aircraft to safely operate,” say Boeing’s and Airbus’ CEOs in a joint letter to Transportation Secretary Pete Buttigieg.

The FAA and the aviation industry as a whole have raised questions about the possibility that 5G might interfere with aircraft instruments, including radio altitude meters.

But U.S. telecoms Verizon and AT&T have already delayed deploying C-Band-spectrum 5G wireless by one month to Jan. 5, 2022. “The U.S. wireless industry group CTIA has said 5G is safe and accused the aviation industry of fear mongering and distorting facts,” the BBC reports.

“A delay will cause real harm,” says CTIA chief Meredith Attwell Baker. “Pushing back deployment one year would subtract $50 billion in economic growth, just as our nation recovers and rebuilds from the pandemic.”

I’m no expert… but safety first?

[Back to Turkey] If you love the iconic hazelnut spread Nutella: “The world is on the verge of a hazelnut shortage,” says business consultant Turgan Zülfikar.

Turkey is the world’s largest hazelnut producer, and the lira’s crash “is having a knock-on effect on hazelnut farmers,” says Business Insider. “These farmers say it has become costlier to buy imported products such as fertilizer and seeds used to produce hazelnuts.

“Nutella-maker Ferrero buys around one-third of Turkey’s hazelnut exports.” Now the Italian-based company Ferrero is looking to its home country — the world’s second-place hazelnut producer — as its new major supplier, but “Turkey is leagues ahead in this market,” says Business Insider.

“Higher costs for farmers could ultimately lead to higher consumer prices,” the article concludes. Assuming you can find the nutty-chocolatey treat: “If you are a Nutella fan, you better stock up at your next food-shopping visit,” advises Mr. Zülfikar.

An underreported cyberattack in October is causing widespread shortages, just in time for the holidays. The target? Cream cheese…

The hack of the largest U.S. cheese manufacturer, Wisconsin-based Schreiber Foods, caused the company’s plants and distribution center to close for several days, “heading into its peak busy period before the Thanksgiving, Hanukkah and Christmas holidays,” CNN reports.

And here’s your supply chain snarl of the day…

“Even before the cyberattack and holiday demand peak, manufacturers were struggling because of labor shortages and supply chain disruptions for raw materials, packaging and trucking.”

“Last year, demand for cream cheese jumped 18% compared to 2019,” CNN says, “as more people were baking at home during shutdowns. Kraft said it’s stayed at that high level in 2021.” 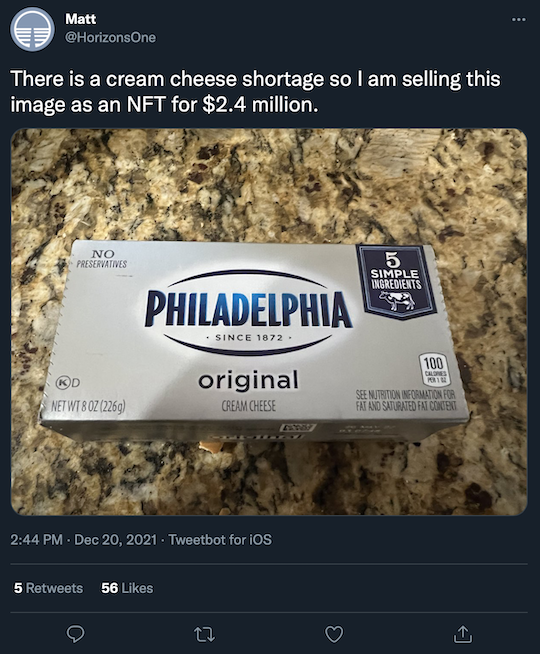 Heh… And nuts! I guess I’m scrapping that new recipe I was going to try for our Christmas dessert: Nutella cheesecake.

You all take care, and we’ll be back with more of The 5 tomorrow…