There’s an old saying in markets about how “nobody rings a bell at the top.” It’s not entirely true.

“Sometimes,” wrote our Jim Rickards in 2014, “the global power elites do ring a bell. But they ring it for the wealthiest and most powerful individuals only. Everyday investors like you are not intended to hear it.”

The warnings come in the form of reports from outfits like the International Monetary Fund and the Bank for International Settlements. They’re written “in highly technical language and are read by only a relatively small number of expert analysts,” Jim said.

“Some of these reports may be picked up and mentioned briefly in the press, but they don’t make the front pages. For you, such pronouncements are just more financial noise in a flood of information that washes over you every day on TV, radio, the web, in newspapers and in other publications.

“The power elite are not signaling you — they are signaling each other.”

As we write this morning, the S&P 500 is back in record territory. Quite the turnaround from the freakout over the Omigod variant a few days ago.

But as we’ve mentioned more than once recently, only a handful of stocks like Apple and Tesla have driven the gains in the big indexes this year.

Which reminds us of another old saying about how it’s a bad sign when “the generals” are charging up the hill… but “the troops” aren’t following.

And sure enough, there’s a new “warning you’re not supposed to hear” — courtesy of the International Monetary Fund. It actually includes the word “collapse.”

To be sure, it’s a veiled warning: “We may see economic collapse in some countries,” wrote IMF chief Kristalina Georgieva on Dec. 2, “unless G20 creditors agree to accelerate debt restructurings and suspend debt service while the restructurings are being negotiated.”

“Admittedly,” says Jim Rickards, “Georgieva is warning about economic collapse in certain countries rather than the global economy. And she has an agenda of getting the more advanced G20 countries to restructure debt obligations from emerging economies.

“Still, we know that economic collapse on any but the smallest scale is contagious and has the potential to spread to developed economies and major capital markets,” Jim warns.

“The channels through which economic distress spreads are too numerous to count, but include major bank loan losses, derivatives such as credit default swaps, trade channels and the ongoing supply chain breakdown.”

Did Jim say “supply chain breakdown”? It’s about to get worse, looking at the news this morning.

China has locked down the city of Xi’an — population 13 million — based on only 127 positive COVID tests.

Given China’s “Zero COVID” approach to the virus, it’s likely more cities are to follow. Given how China is the first link in so many supply chains, it’s not a promising sign.

Yesterday, Jim held an urgent Zoom call with readers titled “Countdown to Crisis.” It’s not just the IMF warning and snarled supply chains Jim has in mind, either. He also addresses…

If you missed it, you can watch the rebroadcast right here. We know it’s something of a downer going into the holidays, but we would never advise burying your head in the sand when a crisis looms. Once more, here’s the link.

But in the meantime, as the day wears on and a three-day market weekend approaches, the rally is gathering steam.

Federal statisticians, eager to start the holiday weekend, got a flurry of numbers out the door this morning. The ones that stand out to us are…

Business uncertainty over the Biden administration’s vaccine mandate will drag into the new year.

The mandates are set to take effect Tuesday, Jan. 4, although enforcement isn’t set to begin until Monday, Jan. 10.

The Supreme Court will hear arguments on… Friday, Jan. 7.

Well, that fits in with everything else about this “emergency” order. Recall the vaccines have been widely available since the spring of this year… but the president didn’t announce the 100-plus employee mandate until Sept. 9. Oh, and OSHA didn’t publish the rules until Nov. 4. And again, they don’t take effect until Jan. 4.

Hell of an “emergency,” huh? No wonder the Supreme Court’s in no rush.

Also unclear is the fate of the mandate applying to federal contractors — which a federal appeals court has put on hold nationwide.

Who needs new lockdowns/restrictions imposed by local government when major tech companies are happy to act on their own?

Amazon, Facebook and Twitter have all pulled out of the Consumer Electronics Show — set to begin in Las Vegas on Wednesday, Jan. 5.

That’s despite the fact the organizers are requiring masks and proof of vaccination, and they’ll offer on-site COVID testing. Also, never mind the research that suggests someone with Omigod is 50–70% less likely to require hospitalization than someone with earlier variants. 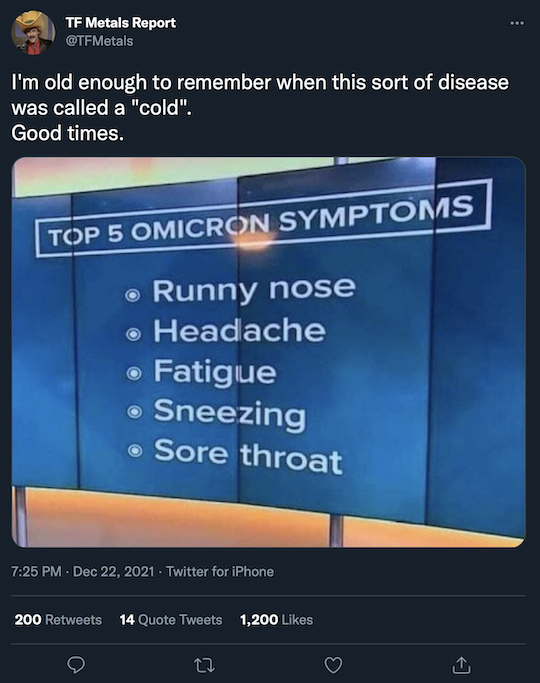 Last year’s CES was a virtual affair; this year’s will be a hybrid thing. In years gone by, the CES hosted more than 180,000 visitors.

A day before the announcement on Tuesday, the investment bank William Blair was already projecting record revenue for the likes of Abbott Labs (ABT), Becton, Dickinson (BDX) and Quidel (QDEL). It cited a “perfect storm” of demand for tests amid a surge in cases ahead of the holidays. The free government tests will only intensify that perfect storm.

Not that the tests will do any good: For most folks, they won’t arrive till next month, by which time millions of people both vaxxed and unvaxxed will have contracted Omigod. 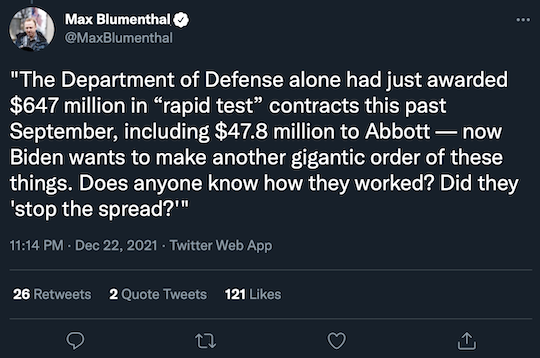 But the feds’ bulk order will do plenty to line the pockets of the test makers, right?

Which makes the testing fiasco at the outset of the pandemic that much more maddening.

In the spring of 2020 we lamented how the CDC refused to let private labs use testing kits that were proven to work overseas — insisting instead on spinning up its own tests that didn’t work.

It’s actually worse than we realized at the time: This week, ProPublica reported the story of an MIT scientist who developed a reliable 15-minute test costing only $10. But the FDA refused to approve it because it was less accurate than a PCR test.

But accuracy wasn’t the point; anyone who tested positive on the cheap test could have followed up with a PCR test for confirmation, right?

And yet the limited supply via a few favored players doesn’t even translate to a decent bump in those players’ share prices: ABT has simply kept pace with the S&P 500 year to date, while BDX is flat on the year and QDEL is down more than 25%.

“The change in the NFL’s testing policy shows what a total farce this whole thing is,” a reader writes — proving once again we never know when a passing remark might generate a flurry of activity in our mailbag.

“When money is on the line, out goes The Science. Why are those vaccinated given more lenient treatment? Don’t we know that the vaccinated can spread Omicron too? Though Twitter users may not know. And it has been a disaster. It’s more than just playing the games. Anyone who plays fantasy football can tell you that. Not to mention the playoff races have been seriously compromised.”

The 5: First-world problems, to be sure, but yeah…

“Thanks for printing my note about the dishonesty surrounding COVID,” writes the reader who kicked off the discussion.

“You of course are correct. Professional sports haven’t been decimated, but rather their rosters. But my point stands. There is exactly one unvaxxed player in the NHL, and not many in the other sports.

“Those who have publicly stated their stance have been pilloried. The press has taken great delight in Cole Beasley’s positive test, pointing to his vaccination opposition. So what makes his test results any different from those of the other hundred or so vaxxed athletes who have tested positive?

“Rather than gloating, I would think anyone with half a brain might be rethinking the all-in stance on the vaccines. Again, my fundamental point about the dishonesty surrounding the subject still stands.”

“Love The 5! And (no but) the reader was accurate in the use of ‘decimated’ regarding the NFL,” points out our final correspondent.

“The term means reduced by 10%, which is pretty close to reality.