“The more popular crypto becomes, the louder the haters will become… Expect it.” says crypto expert Chris Campbell as we continue our lineup of 2022 predictions this week.

And no, that’s not our fulsome prediction; although, Chris does expect crypto opponents — and its champions alike — to make more noise this year.

Chris roots this expectation in the zeitgeist during the early days of another cataclysmic technology — the internet circa the 1990s. “Most people didn’t get it,” he says. “They had lots of questions.” But mainly: “What in the world do you do with it?”

Anecdotally, Chris recalls The Late Show With David Letterman in 1995 when the gap-toothed Hoosier interviewed Bill Gates, asking: “What about this internet thing?” 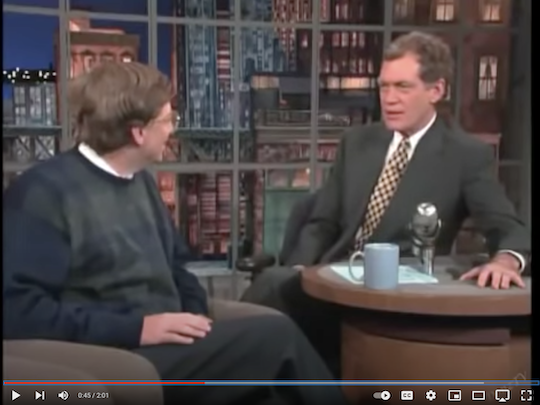 Courtesy: YouTube
Letterman:
“You could listen to a baseball game on your computer… Does radio ring a bell?”

“Letterman was echoing popular sentiment at the time,” Chris says. “Why do we need the internet? It didn’t make sense.” Least of all to economist and Nobel Prize winner Paul Krugman who, in 1998, said: “By 2005 or so, it will become clear that the internet’s impact on the economy has been no greater than the fax machine’s.” (The ol’ flopparoo.)

Chris adds: “As time went on, the skepticism didn’t die down. It grew. Right alongside the hype…

“Meanwhile, government sentiment ranged from skeptical to alarmist to exploitative,” says Chris. “At one point, the U.S. government thought they could control email. The prime example is the Post Office’s E-COM service,” he says.

In hindsight, E-COM seems farcical, but in 1982, the U.S. Postal Service was way ahead of its time. “A rare example,” Chris quips. “[E-COM] allowed Postal Service customers like banks to prepare their statements on computers… and then transmit these messages to USPS computers,” says an article at Technical.ly.

“From there, the postal service would send the messages in the blink of an eye to post offices around the country, where clerks would print them out, seal them in envelopes, and pass them on to letter carriers who would deliver them to people’s homes along with their junk mail and packages,” says Bloomberg Business contributor Devin Leonard.

(We follow Letterman’s cue and ask: Does the telegram ring a bell?)

“Though [E-COM] fell apart pretty quickly,” Chris says, “the intention was to be the go-between for all commercial (at least) electronic messages to protect the USPS.” Eventually in 2001, the service’s inventor repackaged E-COM as Mail2000 and sold it to UPS. For $100 million…

Since we’re reminiscing about the ’90s, we recall something editor and crypto investor James Altucher said in our digital pages in 2017: “Cryptocurrency is the most exciting thing I’ve seen since I first used the world wide web in 1992.”

“From all angles, Ethereum is the clear winner,” he says. “There are thousands of potential use cases for Ethereum.” Need about a score of examples?

James says: “Without going too deep into the weeds, Ethereum tokens are the ‘gas’ fueling the Ethereum network, an ecosystem of distributed applications.

“It’s a way to incentivize developers to build efficient, clean apps (wasteful code costs more ether) and so that people are compensated for helping to run the network.

“The more applications built on the Ethereum network, the more valuable Ethereum becomes.

“It’s the network effect on steroids. And it just takes one killer dApp to make the Ethereum network worth it,” says James. “But I think there will be many.

[Note from editor: If you’ve been kicking yourself for not investing in crypto sooner — or even if you’re a seasoned pro — Chris Campbell and iconoclast investor James Altucher have written a comprehensive book on the subject.

It’s called The Big Book of Crypto… and reviews are beyond favorable:

Learn how to claim your copy of The Big Book of Crypto now… just in time for 2022!]

Taking a look at commodities, the price of crude’s ramping up fast; a barrel of WTI exceeded $80 earlier today but has since settled to $78.40. This after OPEC+ agreed yesterday to increase oil production by 400,000 barrels per day in February.

For the economic number of the day, private job growth totaled 807,000 in December, according to payroll processing firm ADP… which blows the consensus 375,000 out of the water. So much for the “everyone is hiding from the virus again” narrative?

Supply-chain drag of the day: One thousand new COVID cases in the central Chinese city Xi’an led to stringent lockdowns on Dec. 23… adding to semiconductor shortages?

“Samsung’s memory chip operation in Xi’an is one of the largest foreign projects in China,” Reuters says. “The tech giant has two production lines in Xi’an.” In fact, Samsung’s advanced memory chips — for smartphones, laptops, etc. — manufactured in China, account for 15.3% of the total global supply.

Then there’s chip manufacturing giant Micron, also operating in Xi’an. The company released a statement, saying: “The city’s closure has reduced Micron’s team member and contractor workforce at our Xi’an site, resulting in some impact to output levels.”

Both Samsung and Micron say they’re tapping into reserves and should be up to meeting demand, at least, in the short term. “The impact on global supply is controllable,” says Yan Chengyin of Beijing-based Bayes Consulting, “though there are uncertainties.” And that’s a certainty…

The year ahead for cannabis: “It appears likely that the SAFE Banking Act, at a minimum, will pass,” says our pot stock authority Ray Blanco.

“SAFE has already passed the House for the fifth time in seven years,” he says. “It remains to be seen what the Senate will do, [but] because it’s an election year, I believe the odds improve.

“Cannabis legalization is popular in much of the country,” Ray notes. “Congressional Democrats, as well as some Republicans, want to go home to their constituents with a legislative win they can use to improve their re-election prospects.”

He continues: “Even if all the industry got” — at the federal level — “is SAFE, it would represent a big boon. The ability to bank normally would reduce costs for cannabis companies, making them more competitive with black-market weed.

“Plus, the SAFE Act would open [cannabis] players up to new sources of funding via investments and loans, including the potential to uplist to a major stock exchange,” says Ray. “SAFE also opens U.S. cannabis companies up to acquisition from outside the industry, like tobacco or alcohol companies.

“Deals like this have already been inked with Canadian operators; SAFE will put U.S. names on the M&A map,” he says.

“That means 2022 could bring a huge boost to cannabis stocks’ current low valuations,” Ray concludes. “If early 2021 was any guide, the repricing of the sector could be very strong and swift, creating huge profits for investors buying at current levels.”

“Bacteria may have played a major role in the formation of some of the world’s largest silver or gold deposits,” says an article at Mining.com.

“After analyzing the coprolites under a scanning electron microscope the researchers found carbon, pyrite and aluminum silicates, which are commonly deposited in the type of rocks they were looking at. However, they were surprised when they also noticed the presence of elemental silver.”

Lead researcher Julien Kimmig says: “We likely had the poop first, then we had some bacteria or algae growing on the poop, and some of those were likely leaching silver out of the water… To form the biggest piece of silver we found, which measures 300 micrometers, the microbial colony must have been a relatively decent size…

“It might also indicate that while fluid flow plays a big role in the formation of ore deposits, some ore deposits might have had bacterial help, and these microorganisms could have played a major part in creating some of our bigger silver or gold deposits in the geologic past.”

Guess miners better know their sh*t from Shinola? We’ll leave it at that… Back tomorrow!