After The 5 went to virtual press yesterday, the market did a swan dive. A sell-off accelerated with the Dow plunging 500 points… the S&P 500 dipping below 4,500… and the Nasdaq shedding 3% of its market cap.

Then Amazon announced earnings, which, if you read the report beyond the headline record revenue — $137.4 billion for Q4 2021 — were a mixed bag of earnings beats and misses. (Even that “record revenue” was shy of forecasts.)

But it appears the market was mollified by the online retailer’s announcement that due to supply-chain slowdowns and associated inflation the company would be raising Amazon Prime membership from $119 to $139 per year.

With that, AMZN shares rocketed 16% in after-hours trading. Today? Shares are still in double-digit territory: up 13% at the time of writing.

Despite upbeat Amazon, Big Tech’s been through the grinder so far this year…

To wit, Facebook (FB) shares collapsed 25% yesterday after the company revealed its social media platform had lost daily users last quarter for the first time since 2004. But that’s just the tip of the proverbial iceberg…

According to former hedge fund manager James Altucher: “A recent change to Apple’s iOS privacy settings… reduces the efficiency of Facebook’s advertising machine by disrupting its ability” to track user data. As a result, the company forecasts a $10 billion sales loss in 2022.

James notes: “Although Facebook’s rebrand to Meta seemed peculiar when Mark Zuckerberg made the announcement back in October, now the reasoning is finally clear… 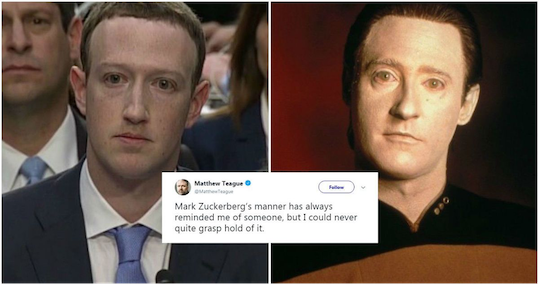 Lt. Cmdr. Data: “Early bird gets the worm?”
[Star Trek: The Next Generation]

“The smartphone ecosystem represents a risk to Facebook’s business. Having identified this risk, Facebook appears determined to be a major player in the next generation of computing: virtual and augmented reality.”

James’ conclusion: “The recent drop in share price represents a prime opportunity to snatch up shares of a company that is already positioning itself to become larger than ever.” (And investors have come to the same conclusion today — shares are down a little over 1%. Buy the blip?)

“Facebook has a home court advantage,” James adds, “when it comes to introducing and transitioning to metaverse opportunities.” Yep, Zuck’s one wily son of a gun. And our tech-stock expert Ray Blanco says you should imitate his example…

“As a technology investor, one of the best things you can do is put yourself ahead of the curve,” says Ray.

Right now? “We have all manner of tech giants racing toward the metaverse,” he says. “Lucky for us, the metaverse will not be a winner-takes-all opportunity. Much like how the internet… functions today, we will see a multitude of companies create their own corners of the metaverse.

“It makes sense: None of this technology can get off the ground without the hardware necessary to run it. Hardware companies like Nvidia and Advanced Micro Devices, which provide the coveted microchips necessary for advanced computing that will build out the metaverse.

“Once hardware and infrastructure are in place, software providers will be where much of the attention goes…

“Software will be necessary to operate within the metaverse,” Ray says. “Companies including Snap Inc. (NYSE: SNAP), which has become a metaverse leader.

“For those unfamiliar, Snap’s main service is its messaging app Snapchat — an app where you can send picture messages that only last for a time.” Think ephemeral Instagram…

“One of Snapchat’s key features is its filters or augmented-reality (AR) overlays that add virtual content to the real-world pictures and videos being sent within the app,” Ray says.

“[Snap’s] latest focus has become wearable technology called Spectacles. In fact, about five years ago, Snap developed early versions of what look like regular sunglasses with attached cameras that sync to the Snapchat app.

“With the latest iteration of Spectacles unveiled last year…

“The technology has moved beyond camera glasses and into true AR smartglasses territory,” Ray adds, “perfectly positioning Snap to capitalize on the metaverse trend.

“Most consumers are only familiar with AR through smartphone camera apps that display virtual objects and interfaces through phone screens,” he says. “But the end goal for many of these leading AR tech companies is to develop a lightweight pair of glasses that can display the same AR content independent from a smartphone.

“The problem is this tech isn’t very accessible. Right now, to get the best AR experiences, you would need to purchase expensive, large devices like the Microsoft HoloLens 2… 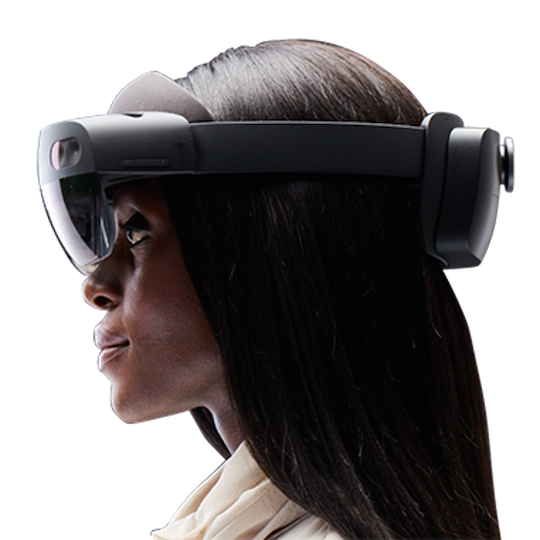 “Prices and designs for these devices act as a barrier to entry and make them impractical for the majority of consumers,” he continues. “This is where Snap could deliver in spades, by bridging the gap between functionality and practicality.”

[Indeed, Snap’s Spectacles 3 have a price tag of $380; although the AR Spectacles aren’t for sale yet — the company is still in the beta phase of development — we’ll see if they’re competitively priced too.]

Ray’s takeaway? “Snap is ahead of the curve on delivering the metaverse future that Mark Zuckerberg dreams of. [The company] offers a wide variety of AR capabilities… using machine learning algorithms.

“Even still, we are some time away from full adoption of the metaverse,” he says. “And accurately calling who will be involved and to what degree is a difficult feat.

“While Facebook [Meta] was the first to plant its flag with branding around the metaverse, it certainly won’t be the last or necessarily the most lucrative opportunity for investors.”

[Editor’s note: Facebook’s historic rebound today represents a major metaverse milestone — in other words, believe the hype. Personally, Ray’s convinced 2022 will be the year companies large and small go all-in on the metaverse.

Ray also knows there’s a critical piece of the metaverse story the mainstream financial media aren’t telling. And most investors will miss the biggest chance to profit because of it. Click now to uncover the metaverse story you’re not hearing anywhere else.]

According to the Bureau of Labor Statistics, total nonfarm payroll employment increased by 467,000 in January — trouncing economists’ consensus 150,000. Plus, November and December payrolls were revised upward for a combined 709,000.

*Sigh* On Wednesday, we mentioned ADP’s estimate of new private-sector payrolls for January — 301,000 jobs lost— and because the number was such a noticeable outlier, it sorta juked us. Although we’ve long been skeptical of ADP’s predictive value for the BLS’ monthly job numbers. Skepticism confirmed.

On the big chart from Calculated Risk depicting the job losses and recoveries from every recession over the last 75 years, here’s where we stand… 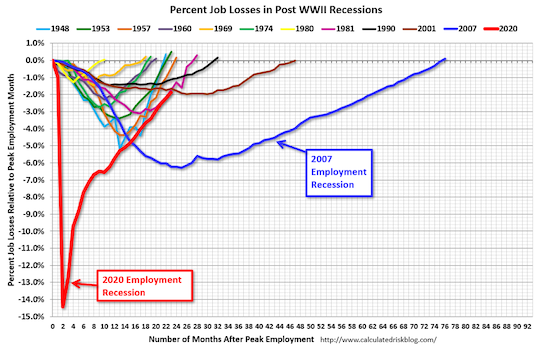 “The current employment recession, 23 months after the onset, is now significantly better than the worst of the ‘Great Recession,’” says Calculated Risk. And we’re now in the vicinity of 2001 recession levels…

Commodities are flush too; oil’s up almost 3% to $92.51 for a barrel of West Texas crude. Something about $100 per barrel? Turning to precious metals, gold’s above its $1,800 resistance line, and silver’s hanging out above $22.

“India’s finance minister has said the country will launch a digital version of the rupee as early as this year,” says a BBC article.

“Introduction of a central bank digital currency [CBDC] will give a boost, a big boost to (the) digital economy,” says Minister of Finance Nirmala Sitharaman. “Digital currency will also lead to a more efficient and cheaper currency management system.”

Jim Rickards’ weighed in on CBDCs in May 2021, saying: “Central bank digital currencies are different from cryptocurrencies, although the differences are often overlooked.”

Most noticeably? “A blockchain is not necessary; instead, the CBDC ledger can be maintained in encrypted form by the central bank itself.” He added: “CBDCs are not new currencies. They will still be dollars, euros, yen or yuan as they are today.” And, in this instance, rupees…

“Only the format and payment channels will change,” Jim said. “No need for credit cards or costly wire transfers.” Or, you know… cash!

Hand in hand with the CBDC announcement, the finance minister broadcast plans to tax the hell out of Indian crypto traders…

In her yearly budget speech, Ms. Sitharaman put forth a plan to levy a 30% tax on income generated from crypto. “It would put profits from trading or transferring cryptocurrencies and non-fungible tokens in the country’s highest tax band,” according to the BBC.

Sumit Gupta, CEO of India-based crypto exchange CoinDCX, says he’s in favor of the government’s scheme to introduce CBDCs, adding that it lends legitimacy to cryptocurrency in general.

However… he’s not fanboying the tax proposal: “A tax rate of 30% is on par with that imposed on gains from speculative activities like lottery, gambling and other gaming activities. That proposed 30% might act as a dampener for greater adoption.” Well, yes…

India’s central bank banned crypto trading in 2018, a move that the country’s supreme court overturned in 2020. So if you can’t drop the regulation banhammer, simply tax crypto to death?

For one day only, a 410-pound 24-karat gold cube was on display in NYC’s Central Park on Wednesday… 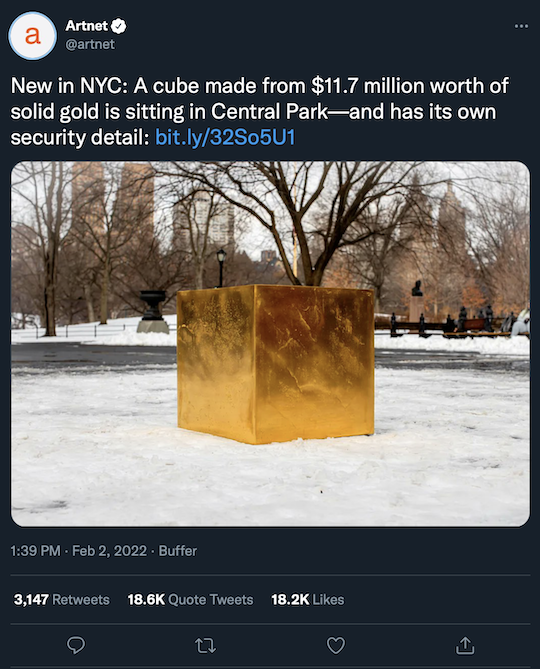 Equal parts art installation and publicity stunt, German artist Niclas Castello conceived the actual shiny object to grab attention for his own crypto called — what else? — the Castello Coin.

Although the Castello Coin will not be sold on U.S. crypto exchanges, an NFT auction will be held on Feb. 21, according to Artnet.

“The cube can be seen as a sort of communiqué between an emerging 21st-century cultural ecosystem based on crypto and the ancient world where gold reigned supreme,” says Viennese gallery owner Lisa Kandlhofer, who was in New York for the art installation’s launch.

Yeah, what she said…

Take care, enjoy the weekend and we’ll be back Monday!