On Friday, hours before China’s President Xi Jinping hosted Russia’s President Vladimir Putin at the opening ceremony for the Winter Olympics in Beijing… the two leaders made their biggest “de-dollarization” gambit yet. 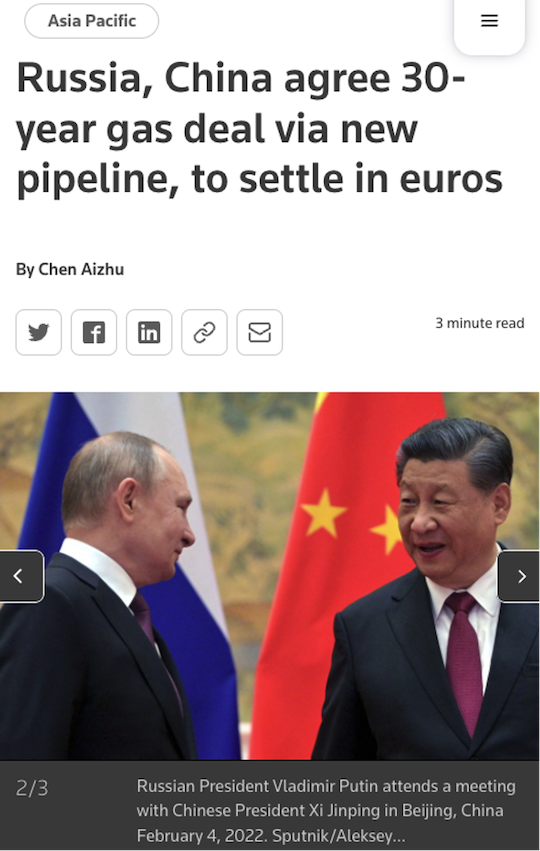 “Russia has agreed a 30-year contract to supply gas to China via a new pipeline and will settle the new gas sales in euros,” reports the Reuters newswire.

“Gazprom, which has a monopoly on Russian gas exports by pipeline, agreed to supply Chinese state energy major CNPC with 10 billion cubic meters of gas a year, the Russian firm and a Beijing-based industry official said.”

Reuters didn’t say so, but the agreement builds on a previous deal the two leaders struck in 2014 — also for 30 years. That deal likewise sought to bypass dollar payments, but by most accounts payments were settled in yuan and rubles.

The Chinese won’t be the only ones paying for Russian energy in euros if Russia invades Ukraine.

An invasion would bring on new dollar-based economic sanctions. “Russia would have to price its oil and natural gas in euros so that it could receive payment,” says Jim Rickards, our ace observer of international economics.

And Jim says the economic upheaval wouldn’t end there.

As we write, French President Emmanuel Macron is meeting with Putin in Moscow, aiming to defuse the crisis. American and Russian diplomats are still talking, too — even if their bosses continue rattling sabers on the Sunday talk show circuit.

Indeed, there’s a good likelihood diplomacy can address Putin’s concerns about being encircled by the NATO alliance — i.e., promises to keep offensive missiles out of Ukraine and a system to verify those promises are being kept.

“If Putin can get most of that through negotiation,” says Jim, “there is no reason to invade Ukraine.”

But if invasion comes… it behooves us to tease out some of the economic consequences.

“These sanctions will include bans of Russian banks from U.S. dollar payment systems, and a prohibition on Russian companies seeking finance in Western capital markets.

“Additional sanctions will include freezes on financial transactions by Russian leaders and firms, prohibitions of certain high-tech exports to Russia, a ban on Russian investment in U.S. businesses and perhaps tariffs on U.S. imports of Russian goods.

“The U.S. will not prevent Russian bank transactions on SWIFT, the international financial communications network based in Belgium. That would be regarded as an act of war by Russia and would not be supported by European members of SWIFT.

“These sanctions would have some impact on Russia but would not change Russian behavior,” Jim assesses.

“Sanctions have been imposed on Russia since the 2014 annexation of Crimea and have had no material impact on Russian policy. Russia has moved over 20% of its reserves into physical gold bullion stored in Moscow in anticipation of freezes on digital payments.

“Because the gold is physical, not digital, it cannot be hacked, frozen or seized. This gold bullion is worth about $140 billion at current market prices.

“Importantly, U.S. sanctions would not affect exports of Russian oil or natural gas,” Jim goes on.

A more likely outcome, though, would be Russia cutting off natural gas exports to Western Europe.

“The impact on Russia would be marginal; it has a waiting list of customers for the natural gas in China. The impact on Western Europe, especially Germany, would be devastating.

“In a best case, higher energy prices from Russian dominance of the Western European market would feed inflation and damage the profitability of manufacturers around the world.

“Financial sanctions would reduce global liquidity, increase market uncertainty and possibly trigger a global financial panic of the kinds seen in 2020 and 2008.”

If that’s the best case… what would a worst case look like?

Basically, it would be the economic fallout from an invasion combined with a string of financial stresses Jim says could very well break out this week. If you haven’t seen Jim’s “Bloody Wednesday” presentation yet… well, best give it a look now because Wednesday is only two days away.

In the meantime, however, the major stock indexes begin a new week treading water.

For now, the rally off the January lows remains intact; on Friday the S&P notched a weekly close juuust above the 4,500 level our Alan Knuckman is watching carefully.

Cryptos rallied handsomely over the weekend, and that momentum is carrying into today — Bitcoin only $200 away from $44,000 and Ethereum over $3,100.

The time might be near for some dip-buying opportunities in speculative tech names, according to our tech specialist Ray Blanco.

But on the other hand, “The widespread selling has created some serious value opportunities in beaten-down innovation and biotech stocks with some names even trading for less than cash.

“We are even seeing SPAC stocks trading for less than their trust value… it’s like free money when you can grab a SPAC like IPOF for under $10 per share.

“It’s an ideal opportunity for investors looking for cheap entry points. Many of these stocks will come roaring back, and when they do, they will post huge gains from today’s prices.” Ray is scouting out some possibilities right now in his premium Catalyst Trader service.

No economic numbers of note this morning, but we have a postscript to Friday’s sunny job numbers.

We’re seeing an unusual amount of pushback online against the Bureau of Labor Statistics’ output. The February report is always subject to annual revisions and without getting into the weeds, it appears this one was, umm, more “subject” than most.

A good reality check always comes from the real-world unemployment rate issued by Shadow Government Statistics — which runs the numbers honestly, the way the feds ran them over 40 years ago. It includes part-timers who want full-time work, and people who’ve plain given up looking for work.

By this yardstick, unemployment held steady last month at 24.5% — which is still higher than the pre-pandemic record of 23.5% in May 2014.

With its ham-fisted cancellation of the Canadian truckers, GoFundMe has inadvertently demonstrated the utility of cryptocurrency. 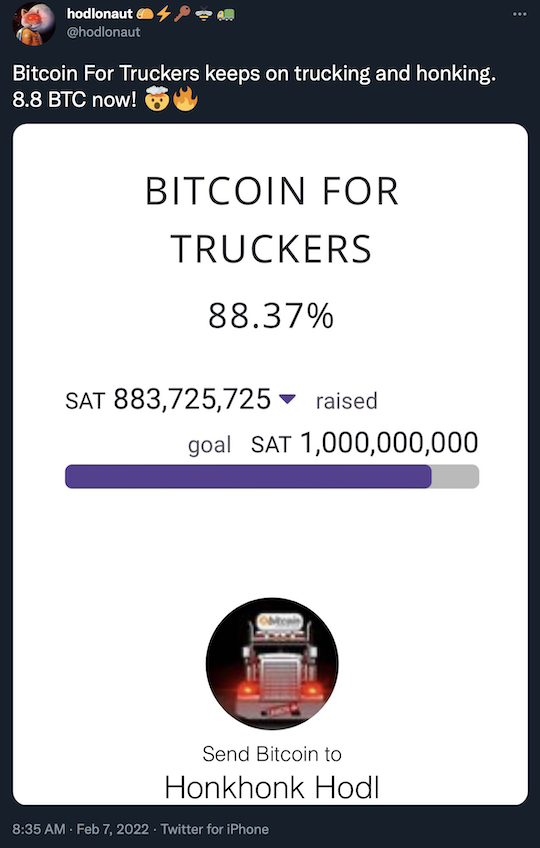 On Friday GoFundMe announced it would withhold $7 million in funds raised for the protesters. About $1 million had previously been disbursed to the convoy demanding Canada rescind its vaccine mandate for truckers crossing the U.S.-Canadian border.

“We now have evidence from law enforcement that the previously peaceful demonstration has become an occupation, with police reports of violence and other unlawful activity,” GoFundMe said in a statement.

An odd assertion, given that at the time police in the Canadian capital, Ottawa, had arrested all of three people — one for carrying a weapon, one for “mischief under $5,000” and a third with making threats on social media.

We can only imagine there were some interesting discussions between GoFundMe executives and the Canadian authorities, seeing as Prime Minister Justin Trudeau denounced the protesters for engaging in “hateful rhetoric” and “violence,” evidence to the contrary notwithstanding. 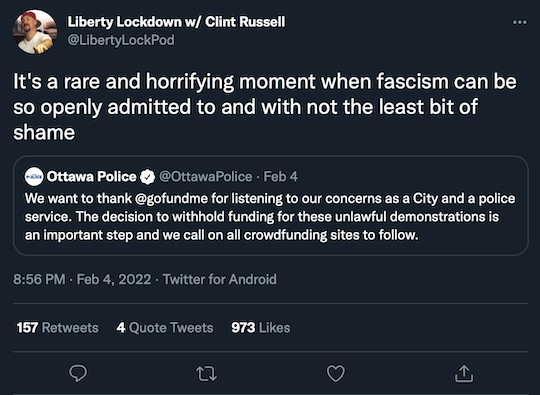 But it was the next part of GoFundMe’s statement that went too far. Way too far.

“No further funds will be directly distributed to the Freedom Convoy organizers — we will work with organizers to send all remaining funds to credible and established charities verified by GoFundMe.” [Emphasis ours]

If donors wanted a refund… they had to jump through the hoops of applying for one.

The wrathful reaction came instantly… and GoFundMe backed down after what must have been some more interesting discussions — this one with its legal team — that included words like “criminal fraud” and “racketeering.”

But the damage is done. As one protester sign says, “F*** GoFundMe. Bitcoin fixes this.”

As you saw in that tweet earlier, donations via one platform total 8.8 BTC — or at today’s prices, around $385,000. Yes, there’s another fundraising site that’s raised far more money using plain ol’ fiat… but we’re hard-pressed to think of another instance where crypto has delivered on the promise of doing an end-run around the traditional financial system.

And we’re pretty sure it won’t be the last…

To the mailbag: “Dave, about gold not having any intrinsic value…”

“Please note just one of many web sites touting the uses and value of gold.

“Of particular note, the last section on ‘Future Uses of Gold’ states:

“This means that the number of uses for gold has been increasing over time. Most of the ways gold is used today have been developed only during the last two or three decades. This trend will likely continue. As our society requires more sophisticated and reliable materials, our uses for gold will increase. This combination of growing demand, few substitutes and limited supply will cause the value and importance of gold to increase steadily over time. It is truly a metal of the future.’

“I am not anti-crypto. I just think gold has more intrinsic value.

The 5:The article sort of reinforces our point. Yes, gold is used in electronics and dentistry and such… but those uses don’t move the needle of gold demand in the way that investment and jewelry do.

If someone were to discover an economical industrial application for gold that could be put to widespread use — something akin to the use of platinum and palladium in catalytic converters — its store-of-value utility would be greatly diminished. Gold would then be subject to the booms and busts of whatever industry was using it in quantity.

Either way, gold still has no “intrinsic” value because the only value any physical object has is the value that you and I and other people attach to it.

And — coming back to where this discussion began — if a critical mass of people decides Bitcoin has utility as a store of value, the same way gold has been for millennia, there’s nothing you or I or anyone else could do to change that.

Again, that’s “if.” The jury’s out and it may not come back for many years.