After we went to virtual press yesterday, Fed funds futures indicated there was a 56% probability of a 50-basis point increase in March. Then St. Louis Fed President James Bullard opened his pie hole, claiming a 96% probability.

Regional Fed presidents have no power — even when they have a rotation on the FOMC — but for whatever reason, this got a reaction. And by the closing bell, the major U.S. indexes were selling off. Hard.

Then the rumor circulated about an emergency rate increase today or Monday. The fallout? The Dow cratered 1.5%… the S&P 500: 1.8%… while the tech-burdened Nasdaq lost 2.10% market cap.

But hold the phones! Just before midnight yesterday, the Fed supposedly backpedaled. Hard.

No half-point hike? The Fed is rapidly losing control of its messaging, and volatility could be considerable. Which leads to our discussion today about tech stocks (Nasdaq, amiright?) and interest rates…

“Many of the most popular, speculative tech companies won’t turn a profit for years,” says our retirement-and-income specialist Zach Scheidt.

“And even then, it might take much longer until those profits really scale,” he says. “And that time delay really matters to Wall Street investors.

“Most professional investment managers use a formula called the discounted cash flow (or DCF) model to determine a fair price for the stocks that they buy.

“When I was working for the hedge fund and studying for my professional designations, I had to learn all the exponential math and technical variations of this model.

“The DCF formula is used by Wall Street professionals day in and day out,” Zach says. “It’s like their bible for pricing stocks.”

The Financial Post explains: “Discounted cash flow modeling, or DCF, is a method of arriving at a fundamentally driven net present value for companies… Future earnings potential is ‘discounted’ in light of the presumption that receiving a dollar today is usually more valuable than a dollar tomorrow.” (Emphasis ours.)

“This is especially true when interest rates go higher,” Zach adds. “And now that interest rates are moving higher, Wall Street investors know that they should invest less money for the same expected returns.

“The longer Wall Street has to wait for profits, fewer investors will be willing to pay today,” says Zach.

“And since speculative tech stocks aren’t expected to generate profits for years, the value for these future profits is now sharply lower,” he says. “It doesn’t matter if the company’s technology is superior or if the new innovation will change lives in the future.

“What matters is that profits won’t show up until much later. And now, thanks to higher interest rates, you should be paying less for these stocks today.

“It’s frustrating for investors in speculative tech companies,” he admits. “But it’s just the way the market works.

“This is where investors are locking in big profits today,” he says. “And if you still love your speculative tech stocks, you can temporarily park your money in the areas that are working now while waiting for interest rates to peak.

“Then, once interest rates are done driving the current value of your speculative stocks lower, feel free to jump back in at a better price. That way you can start fresh with new positions that have a much better chance of trading higher.

“That’s the playbook for us here in the early months of 2022,” Zach concludes. “Buy stocks that are generating reliable profits today… And keep an eye on companies that will profit tomorrow, adding shares once they’re done pulling back.” 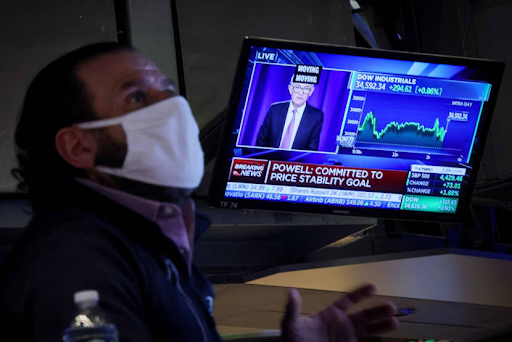 At the moment, the Fed is refraining from making an emergency interest-rate hike before March. Don’t be silly! Not at the risk of “signaling panic and cementing criticism that the central bank is too far behind in reining in inflation,” Bloomberg notes, like, unironically?

Last week, the U.S. national debt topped $30 trillion for the first time. “It’s worth a moment to explain how to think about that gargantuan debt number,” says an article at The Wall Street Journal.

First, lop $6 trillion or so off that headline number because that’s the figure “the government owes to itself in Social Security and other IOUs,” the article notes.

“[Social Security] isn’t a contractual debt like a Treasury bill that must be repaid or risk default. Future politicians can refuse to pay workers what they owe, and eventually they will.” Alrighty then…

“The debt held by the public is some $24 trillion, which is bad enough,” says WSJ. “That’s more than 100% of GDP, a level the U.S. has previously reached only during wartime.”

Our macro expert Jim Rickards says: “There’s no need to pay off the national debt… We just have to keep rolling it over.

“But to do so, we need to maintain our credit standing, as Hamilton understood.” Yes, that Hamilton — America’s first Treasury secretary who invented the U.S. bond market in 1790.

At the time, “the newly formed United States of America was facing claims from creditors who had financed the Revolutionary War,” Jim says. “Congress had a simple solution: Default!”

“This plan was so successful that the U.S. Treasury market is now celebrating its 230th anniversary.”

To wit: “Debt went up during the War of 1812, the Mexican-American War of 1848, the Civil War, World War I, World War II, Korea, Vietnam and during the Reagan era to win the Cold War,” Jim lists. “The only major debt increase without war, prior to 2000, was during the Great Depression.

“It was only after 2000 that things went off the rails and government debt went straight up under George W. Bush, Barack Obama, Donald Trump and Joe Biden,” says Jim. “Now the debt is unmanageable.” (And after withdrawing from the war in Afghanistan — arguably America’s longest war — what are the chances we’ll pay off the national debt now?)

“Say goodbye to Hamilton’s master plan,” Jim concludes. “Time to buy some gold before it’s too late,” he recommends.

We’ve frequently mentioned that Jim believes 10% of a robust portfolio should be allocated to precious metals. With one caveat: Only partner with a reputable company that offers the best in service and security.

You should know our company bought a stake in the Hard Assets Alliance a few years ago to strengthen our business relationship. We benefit when you do business with them… but we think you’ll benefit too.

[The latest on the Canadian truckers’ uprising] Prime Minister Justin Trudeau has fled Ottawa to a “secret location” for “security reasons.”

“[It’s] a politically disastrous move denounced by just about everyone with a microphone or a Twitter account, including members of his own party,” says journalist Matt Taibbi at Substack.

Example? “Liberal MP Joël Lightbound… ripped Trudeau’s politics as divisive, saying his government needs to recognize people have ‘legitimate concerns’ while adding, acidly, ‘Not everyone can earn a living on a MacBook at a cottage.’” Which, we’re guessing, is the vibe of Trudeau’s “secret location”?

Taibbi concludes: “A near-exact repeat of the ‘basket of deplorables’ episode, Trudeau’s imperious description of [truckers’] ‘unacceptable’ views instantly became a rallying cry.” While “Trudeau is becoming the ultimate example” of an out-of-touch politician.

More on the situation in Canada Monday…

In September last year, Michael Leigh-Mallory uncovered a gold penny — circa 1257 — in Devon after he dusted off ye olde metal detector… for the first time in a decade!

“I was in a state of shock,” he told the BBC. “I knew it was gold and medieval but I had no idea it was from Henry III.” And what a find too: one of just eight such coins known worldwide… 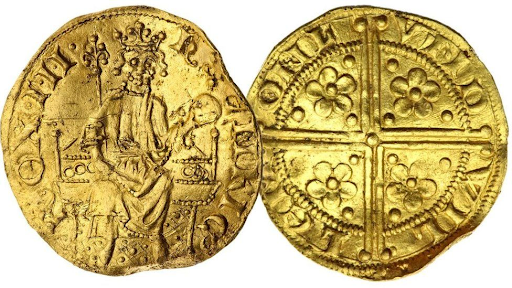 That’s because the majority of these pennies were melted down shortly after they were minted. “It was… at a time of emergency when [King Henry III] had to pay off his campaigners in Wales,” says Spink’s senior numismatist Gregory Edmund.

The NFT postscript? The coin’s auction was historic for another reason too — it was the first numismatic NFT sold by an auction house, according to Spink. The NFT recreates the moment the coin was unearthed.

The proceeds from the NFT (almost $25,000) were split between two charities.

“Mark my words,” a reader prognosticates, “coming sometime this summer, Biden and the Dems will claim that they have ‘defeated’ COVID, just as they promised. We will hear this theme nonstop up to Election Day, and the MSM will turn it into fact by the time we go to the polls.”

The 5:The media’s narrative has unquestionably shifted this week, including COVID Czar Fauci saying the U.S. is exiting the “full-blown” phase of the pandemic and entering a time when “more people [make] their own decisions.” Gee, thanks.

Fauci’s even retreating from vaccine mandates… in favor of, what, taking a chill pill? This after COVID’s biggest hype man amped hysteria to 11 for literal years… Quite the reversal, indeed.

Take care, and try to have a good weekend. We’ll be back Monday!