The most we can say about the State of the Union Address is President Biden didn’t push us any closer to the brink of nuclear war. Yay… And it’s something TheWall Street Journal’s editorial board — following in the mainstream footsteps — is chiding Biden for.

“Mr. Biden did offer stirring support for Ukraine and its fight for freedom,” WSJ says. “He was properly condemning of Mr. Putin.” OK…

Once again, we’re shaking our heads at upper-crust mediaites ensconced in their comfy home offices, spouting off about deterring “autocrats” with little concern for real-world consequences. (We’ll spell it out: N-U-C-L-E-A-R consequences.)

But in the scramble to halt Putin’s Ukraine invasion, “Washington professes to have a killer weapon,” says Ambrose Evans-Pritchard, international business editor of the Daily Telegraph.

The way America sees it, “to cut off Russian access to the global market for semiconductor chips” is the “modern equivalent of a 20th-century oil embargo, since chips are the critical fuel of the electronic economy.

“It would gradually asphyxiate Russia’s advanced industries and would in theory reduce Putin’s regime to a stunted technological dwarf,” according to Mr. Evans-Pritchard.

On the other hand, Russia already leans on China for about 70% of its semiconductor imports. It’s questionable then whether choking off chips from other manufacturers will have much impact. (Albeit, the high-tech quality of Chinese semiconductors is debatable.)

And on the other other hand… 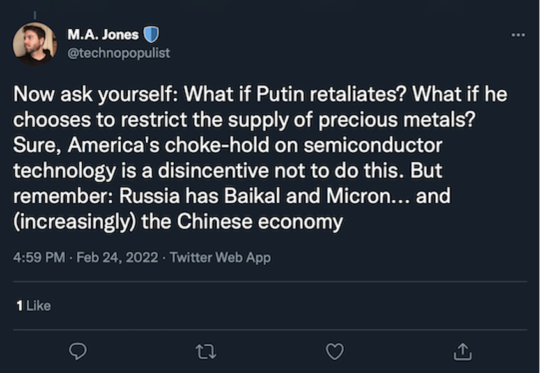 “Putin has the means to cut off critical minerals and gasses needed to sustain the West’s supply chain for semiconductor chips,” Evans-Pritchard concurs, “upping the ante in the middle of a worldwide chip crunch.”

Furthermore? “If [Putin] controlled Ukraine, his control over key strategic minerals would be even more dominant,” he says. “Some 90% of the world supply of neon, used as laser gas for chip lithography, comes from Russia and Ukraine.” 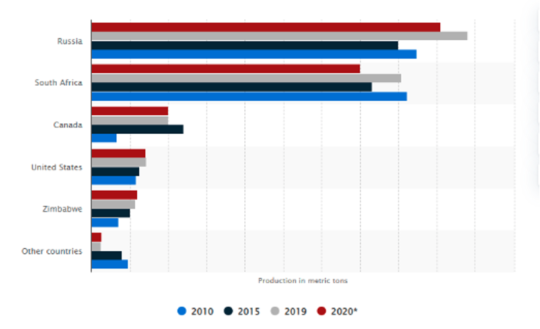 “Russia has been the leading global producer of palladium in recent years,” Statista says. In 2020, for example, “210 metric tons of palladium was produced worldwide” — with Russia singlehandedly accounting for 91 metric tons.

Plus, state-owned titanium producer VSMPO-AVISMA of western Siberia accounts for one-third of global titanium supply. And Ukraine is replete with titanium and other natural resources, including uranium, manganese and iron ore.

One might almost conclude Russia has the upper hand when it comes to the basic building blocks of 21st-century technology, right?

“Once you drill into the menu of Western sanctions,” says Evans-Pritchard, “it becomes painfully clear that the economic deterrent does not add up, either because the measures are less than they seem or because retaliation risk makes them unusable.”

Dan Amoss — Jim Rickards’ colleague and senior analyst — agrees: “Putin’s control over the supply chain is probably not something the trigger-happy Western sanctioners contemplated ahead of time.” (Our resident mining expert Byron King is even more plainspoken: “Yes, Russia has us over the barrel for many critical items.”)

“My point is this: If delicate, densely interconnected trade and payment links around the globe get rearranged, it’s going to be very costly.

“There’s no sugarcoating it,” Dan concludes, “duplicating supply chains would take a decade or more, raise marginal production costs and lower standards of living — mostly through inflation,” he says.

OPEC+ convened for a meeting this morning: “Today’s OPEC+ meeting lasted less than a quarter of an hour — the shortest meeting on record,” says The Guardian. “No mention was made of Ukraine.”

The agenda for these monthly meetings is simple: “Set quotas for crude oil production,” Econoday says. And even though Russia is the second-largest oil exporter in the world, the country is just an “associate” of “the oil cartel OPEC,” as The Guardian puts it. Heh…

“OPEC+ agreed at today’s meeting to stick to their plans for a modest rise in output in April — despite Russia’s invasion of Ukraine, and in defiance of calls from the United States and other major consumers for more supplies.”

For more context, a barrel of WTI surged 10% yesterday, surpassing $105 for the first time since 2014. (Or the last time Russia invaded Ukraine.) And crude’s flirting with $106 today.

In the meantime: “Before refiners and banks are certain they won’t fall afoul of complex restrictions… they won’t do business with Russian oil, traders and others involved in the market,” The Wall Street Journal reports. So as the price of crude skyrockets and supply dwindles, “about 70% of Russian crude trade is frozen,” says Energy Aspects, notes Bloomberg. 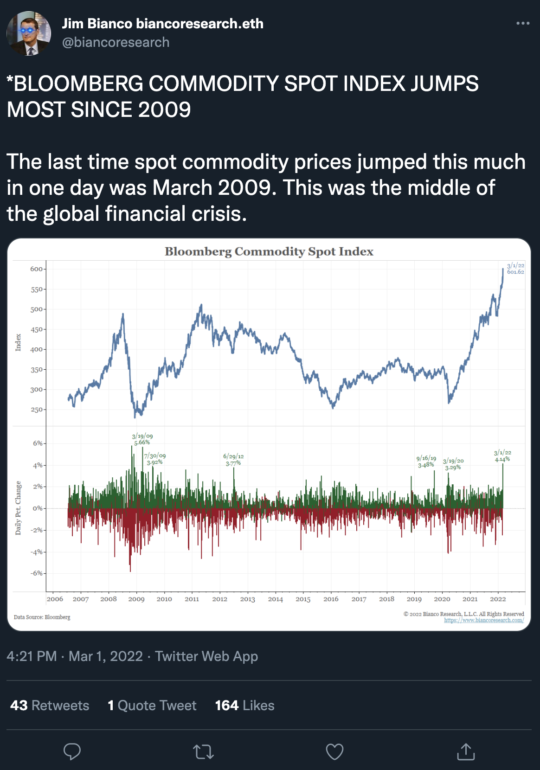 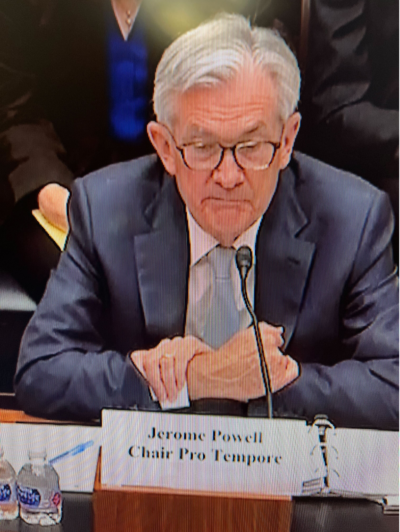 Notice glum-looking Jay Powell’s moniker? His term expired on Jan. 31, and until he’s either reconfirmed or someone else takes his place, Powell is technically the acting Fed chair.

“If Powell [displeases] the Senate… they could march down to the floor and vote him out. So maybe his title is right, he’s the temporary chairman until he angers the Democrats by not reining in inflation,” Bianco says.

(For some perverse reason, Powell’s predicament reminds us of nu metal group Korn’s 1998 hit song “Freak on a Leash.”)

FAANG strikes back? (Not what you think.)

Facebook and Google have followed suit, deplatforming Russian state media accounts and, in Google’s case, removing Russia Today (RT) and Sputnik from Google’s app store Play. Which leaves Amazon: The company has no direct operations in Russia or Ukraine but has vowed to donate up to $10 million to NGOs providing relief for Ukrainians.

“Whenever there’s a major global event or a big shift in the economy, it’s tempting to focus on just that one thing,” says our retirement-and-income specialist Zach Scheidt.

“You may have had that feeling last week when Russia invaded Ukraine, the stock market gapped sharply lower and then rebounded.

“Panic selling gave way to fear of missing out,” he notes. “And many investors I know simply froze like a deer in the headlights.

“During times like these,” Zach says, “it’s important to take a step back and remember that there are many other things going on in the market right now…

“My point is that despite the importance of the Ukraine issue (and it is important),” he says, “there are still many other factors to consider.

“There are plenty of opportunities developing that aren’t affected by major issues investors are focused on today.

“The most important thing is to keep your wits about you when others are zeroing in on a single issue,” Zach concludes. “You’ll soon see many opportunities to buy names on your watch list — at cheaper prices — simply because the rest of Wall Street is only seeing part of the whole picture.”

[Shrinkflation] The largest Burger King franchisor in the U.S. is “fighting” inflation by cutting the number of chicken nuggets in a meal and more.

“The Whopper, the brand’s most popular product by a wide margin, has also been removed as a core discount item and is no longer available in the two-for-six or two-for-five promotions,” says CEO Daniel Accordino of Carrols Restaurant Group.

“Recent actions… include lifting price caps on value menu items and reducing the number of nuggets [in] meals from 10 pieces to eight,” he says.

More to the point, while Burger King’s parent company Restaurant Brands International (QSR) stock is down about 8% year to date, Carrols Restaurant Group (TAST) — which owns and operates more than 1,000 Burger King restaurants — is down more than 23%.

But paying the same for less? No, thanks…

“From a Canadian who’s been involved in a small business for close to 20 years,” a reader says,“98 on the freedom scale?!”

“Either I’m naive about doing business anywhere else in the world (possibility), or whoever thought Canada deserved a 98 has never spent time in Canada… And to be clear, I’m talking pre-debanking debacle.”

“You’ve mentioned the military draft system in several of your recent 5 Min. Forecasts,” writes another reader.

The 5: Sure seems like a slam-dunk case, but the Supreme Court already did its job in 1918, ruling against American men during World War I who attempted to apply our reader’s logic. You know the drill: Civil rights are eighty-sixed “during times of war.”

Take care… We’ll be back with more of The 5 tomorrow.