The Truth About Cyberattacks

OK, our advice a month ago about hitting the ATM, topping off the gas tank and charging all your devices? It goes double this morning. 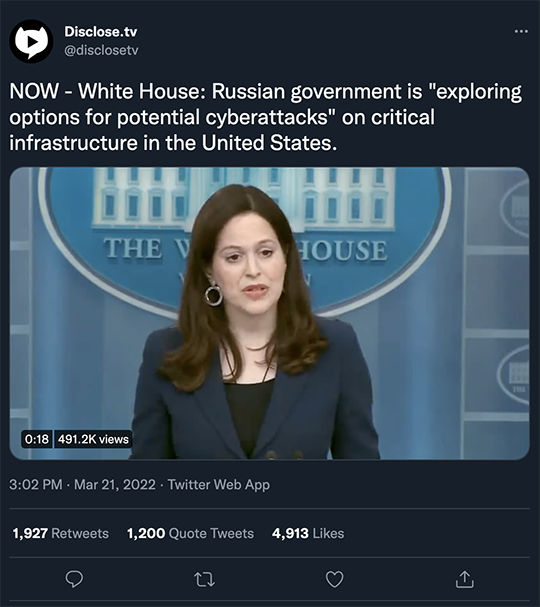 Ordinarily, we’d dismiss this sort of chatter from the White House as so much arm-waving. Or butt-covering, as the case may be.

But one day after Russia invaded Ukraine on Feb. 24, we chronicled how the Biden administration was floating the half-baked notion of offensive cyberattacks against Russia. By way of example, “You could do everything from slow the trains down to have them fall off the tracks,” said an anonymous spook-type to NBC News.

Have such attacks now taken place? And is Team Biden slyly warning about a looming counterattack on our internet or power grid?

Reminder: It was around this time in 2017 we noted that for every dollar Washington spent on cyber-defense, it spent nine dollars on cyber-offense.

That is, the federal government placed almost no priority on protecting Americans… while sparing no effort to sabotage foreigners.

In a particularly outrageous example —one we learned about only through WikiLeaks —the CIA discovered vulnerabilities in the hardware and software produced by American high-tech companies like Cisco.

But rather than say to those companies, “Hey, we found this stuff —you might want to patch it,” they said to themselves, “Hey, what if we use this stuff to jack around with the Russkies and the Chi-coms and the Eye-ranians?”

The fact that hackers might discover the same vulnerabilities and use them to jack around with you? The CIA couldn’t care less.

That 9:1 ratio of offense to defense probably isn’t as extreme now as it was five years ago —the feds actually sounded a little chastened by the disclosure —but what hasn’t changed is that you and I are pawns in a chess game of global power players.

Just remember that if there’s no electricity, there are no credit/debit cards and no power to the gas pumps. Proceed accordingly.

➢Comic relief: In response to the warning of Russian cyberattacks, one wag on Twitter said, “May I make a request that they obliterate student loans as a first target?” Heh…

Meanwhile —with sanctions disrupting the flow of Russian oil —Washington is prepared to aid and abet war crimes in order to secure a more reliable oil supply from the Middle East.

It was seven years ago this Friday that Saudi Arabia launched a genocidal war in Yemen. Rebels had seized much of northern Yemen, and the Saudi-backed president had fled the country. Soon, the United Arab Emirates joined Saudi Arabia in waging war.

Toward year-end 2021, the United Nations estimated the death toll in Yemen at 377,000 —that’s airstrikes, starvation sanctions, cholera outbreaks, the works. About 70% of those deaths are children under age five.

Under both Barack Obama and Donald Trump, Washington aided the Saudi Arabian and UAE militaries in this slaughter —indirectly with weapons sales, directly with targeting and refueling assistance.

Joe Biden dialed back the aid last year —but only up to a point. He went along with continued weapons sales on the pretense that the weapons were “defensive” in nature.

But as Quincy Institute research fellow Annelle Sheline points out, “Defensive capability converts directly to offensive advantage. By assisting Saudi Arabia and the UAE with defense, the U.S. allows these countries to attack Yemen with greater impunity.”

Fast-forward to the present and Biden is clearly willing to trade more Yemeni lives for access to more Saudi Arabian oil.

Perhaps you saw the news earlier this month: The crown princes who run Saudi Arabia and the UAE both turned down phone calls from Biden as he hoped to “contain a surge in oil prices,” according to The Wall Street Journal.

And as we mentioned last week, Saudi Arabia is now looking to sell some of its oil to China priced in yuan —a move that would severely undermine the “petrodollar” arrangement that’s helped prop up the U.S. dollar as the globe’s reserve currency since the 1970s.

Over the weekend, The Associated Press reported that Washington has shipped “a significant number” of Patriot missile systems to Saudi Arabia in response to the kingdom’s requests.

Yes, the Patriots can be passed off as “defensive” in nature… but it’s hard not to see cause and effect here.

It’s also hard not to see the sick irony: As Ms. Sheline observes, “The Saudi and Emirati military aggression that the U.S. supports is little different from Russian actions in Ukraine.”

To the markets, where it’s Reuters’ turn to acknowledge something is broken in the global commodity trade.

We’ve said as much for most of this month. Bloomberg started catching up last week. Now Reuters steps up —personalizing the phenomenon with a wheat farmer in western Kansas named Vance Ehmke.

Even though local prices had shot up about 30% to nearly $12 a bushel, Ehmke was unable to cash in. “He and his wife, Louise, told Reuters they couldn’t sell a nickel of their upcoming summer wheat harvest for future delivery.

“Futures prices for corn and wheat had rocketed so abruptly that many along the complex chain of grain handling – local farm cooperatives, grain elevators, flour millers and exporters – stopped buying for fear they couldn’t resell at a profit.

“Others couldn’t afford an industrywide risk-management strategy known as hedging that keeps global commodities markets moving. Missiles falling in Ukraine had rocked that system, sending middlemen scrambling to shore up positions in the futures market that were costing them millions of dollars per day.”

Oh, and the resumption of nickel trading at the London Metals Exchange we mentioned yesterday? We spoke too soon. The LME declared the afternoon’s trading a “disrupted session” and once again canceled trades after they’d already been executed.

But if you look at the quoted numbers on a screen, all remains calm.

Crude has pulled back nearly two bucks but remains above $110 a barrel. Precious metals have given up their modest gains from yesterday, gold now $1,920 and silver $24.78.

The major U.S. stock indexes have shaken off Federal Reserve chair Jerome Powell’s threats to tighten monetary policy at a faster pace than previously promised: The Dow is up two-thirds of a percent near 34,800… the S&P 500 up 1% and back above 4,500… and the Nasdaq up 1.6%, back above 14,000.

In the bond market, portions of the yield curve remain inverted. The 10-year Treasury note yields 2.37%, the highest since May 2019. But that figure is actually lower than the 7-year, 5-year and 3-year —an unnatural condition. It is still higher than the 2-year but by less than 0.2 percentage points. When that spread goes negative, it’s almost always a harbinger of recession.

Cryptocurrencies might be breaking out —Bitcoin over $42,500 and Ethereum a few bucks over $3,000.

The market news from overseas is mixed: After a week of COVID testing, production of Apple gear has resumed at Foxconn’s giant factory in Shenzhen, China. But trading of the debt-laden China Evergrande Group has been once again suspended after the firm announced it won’t be able to publish its audited 2021 numbers on time.

“You said it again,” a reader writes to call us out. “‘The Fed is way more concerned about inflation than it is the stock market.’

“Why didn’t the Fed on Wednesday boost the interest rate to 15% (-7.5% interest and 7.5% inflation) and make a real serious stab at inflation like President Carter and Paul Volcker did in 1979? Might there have been a major crash in the stock market, which you say they are not concerned about?

“Had to reply because you people are more educated than that or should be. Or maybe you think your customers are idiots.”

The 5: We get your point: If the Fed were truly serious about containing inflation, they’d jack up interest rates higher than the inflation rate. But that doesn’t negate our position.

Like in 1979, the Fed chairman is under enormous pressure from a Democratic president to curb inflation —with an important election looming and the potential for civil unrest lurking in the background.

Unlike in 1979, Jerome Powell operates under the illusion that he can curb inflation without inducing a recession. So he’s peeling off the bandage a millimeter at a time instead of ripping it off in one swift move. It’s dawning on him now that he’ll have to peel more quickly —which was the point of his jawboning yesterday about raising the fed funds rate in half-percentage-point increments.

Meanwhile, ever since Paul Volcker left the post in 1987, financial markets got accustomed to the “Fed put” —that is, a generous backstop every time something went wonky.

That’s what’s coming to an end. And as Jim Rickards says, as long as a stock-market decline is controlled and doesn’t become “disorderly” like the corona-crash two years ago… the Fed will continue tightening.

Speaking of Jim Rickards… “Your response to the reader yesterday is disingenuous,” a reader writes after we addressed a complaint about our campaign last week for Jim’s new Countdown to Crisis trading service.

“There were several emails/texts dramatically warning about the 2:00 p.m. Wednesday meltdown. I like Jim and respect his analysis of world events, but this whole megillah was over the top.

“I think you need to acknowledge and not repeat this nonsense, or you will lose readership.”

Adds another: “The part that annoys me is that we are bombarded with so many follow-up emails it makes me think that you people think we are idiots and need to be told 50 times when three–four would be enough!

“I have read and heard Jim Rickards for years and will continue to do so… but again, please…’less is better’!”

The 5: Did we grab the reader by the collar with the 2:00 p.m. talk? Absolutely. Once that collar-grabbing brought them in the door, were we also careful to specify that’s when the Fed would set events in motion eventually leading to a crash? We think we were. But we’ll keep your input in mind next time we launch a similar promotion.

As for the frequency of emails… it’s a fine line, to be sure.

We have many metrics by which to measure the success of a marketing campaign… but it’s hard to gauge how many emails are too many. Until we develop an alternative universe, there’s no way to A/B test that one!

At this time, our publishers and marketers are of the opinion that the benefits of a saturation approach outweigh the negatives. But the marketplace is a fickle thing and that’s always subject to change. Your feedback is a potential signal of that change, and so we thank you for your input. We don’t want to lose readership, that’s for sure!