As maybe you’ve heard, Joe Biden is in Brussels for a NATO summit. He announced some additional sanctions against Russia.

The one that’s got our attention is described this way by NBC News — “plans to try to blunt the Russian central bank’s ability to prop up the economy by making clear that any transaction involving gold related to the bank is prohibited.”

As our Jim Rickards has pointed out for many years, the Russian central bank’s gold stash — measured as a percentage of its economy — is the biggest in the world. Moscow has purposely built it up since 2009 as a defensive shield against American economic warfare.

Nothing announced this morning will change that.

Really, how does the president propose to enforce his declaration?

“Of course, the gold is physical, about 2,300 metric tons worth about $150 billion, and is stored inside Russia,” Jim Rickards explains. “So it can’t actually be frozen or seized at all.”

Presumably, Washington will impose secondary boycott sanctions on anyone who helps Russia transport or transact in the gold. But again, how can that be enforced?

“If Russia puts 100 metric tons of gold on a plane and flies it to Beijing in exchange for manufactured goods, they’re not exactly going to issue a press release about it,” Jim says drily. “That’s the kind of transaction that will go undetected by U.S. intelligence.

“Gold is an element, atomic number 79, and is easily melted down and re-refined into new gold bars with Chinese markings that are untraceable. The Central Bank of Russia can buy more gold from Russian miners for rubles to make up for the shipment. Again, that gold is untraceable (Russia and China both have numerous gold refineries).”

And so the gold-related sanctions amount to so much virtue-signaling — “doing or saying something that has a feel-good appeal but doesn’t actually accomplish anything,” Jim says.

“At best that’s useless and at worst it’s deeply cynical. If this is the best the U.S. can do, then Putin is not only on his way to winning the shooting war, he may win the financial war as well.”

Especially when you consider the financial volley Putin fired yesterday… 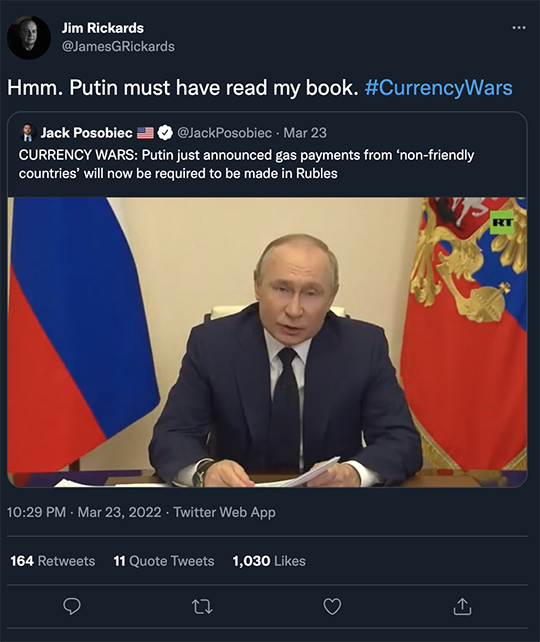 The details are still fuzzy, but Putin says Russia will take “measures” to ensure that “unfriendly countries” have to pay for Russian natural gas in rubles.

He didn’t say so… but that would surely include all the European Union countries that rely on Russia for about 40% of their natgas imports to stay warm and keep the lights on.

“If natural gas is priced in rubles,” Jim Rickards tweets, “buyers have to purchase the rubles with dollars. So Putin gets the dollars, a stronger ruble and still sells gas. The White House will figure this out in a few weeks.”

Ponder the irony: Western leaders are seeking to crash the ruble… but instead they might have to prop up the ruble, lest everyday Europeans freeze in the dark.

“We are facing the failure of Western sanctions policy,” says a hand-wringing column by Ambrose Evans-Pritchard in the London Telegraph.

“Russia has enough usable foreign currency to stay afloat for a long time. Western sanctions against the central bank are not proving to be the killer blow supposed at first, and nor is the ejection of some Russian banks from the SWIFT nexus of global payments… Iran endured tougher sanctions without buckling.”

Mr. Evans-Pritchard says only “a total energy embargo” for Europe — and all the economic pain that would come with it — would achieve Western aims. Current policy amounts to “the worst of all worlds. We are suffering an energy shock that is further inflating Russia’s war-fighting revenues.”

Which is more or less the way Putin planned it. “We laid out the Russian financial warfare plan in 2009–2011,” says Jim Rickards. “They’re following the playbook like Tom Brady.”

What Jim’s referring to is the Pentagon’s first-ever “financial war game” held in early 2009 — an event in which Jim was a key player. He told the story in gripping detail at the start of his 2011 book Currency Wars.

“The scenario I presented at the time,” he recalls, “was that Russia and China would accumulate large gold reserves, pool their gold and launch a new digital currency backed by gold in place of the U.S. dollar. Russia and China would then insist that any purchases of Russian energy or Chinese manufactured goods be paid for in the new currency.

“It was a clear-cut effort to get out from under U.S. dollar hegemony and to protect themselves from U.S. dollar-based economic sanctions. Of course, that’s exactly what’s playing out today.”

Heads up if you’re a current subscriber to a Rickards publication: Watch your inbox in the coming days for an invitation to our own Financial War Games event, hosted by Jim. “This will give you the chance to learn some of these secrets I helped teach the intelligence community,“ he promises — “and what you need to do right now to protect yourself and your wealth, and even how to profit in the days ahead.”

A related thought before we get to the markets today. For all the talk by Joe Biden and other Western leaders about how “isolated” Russia is now… 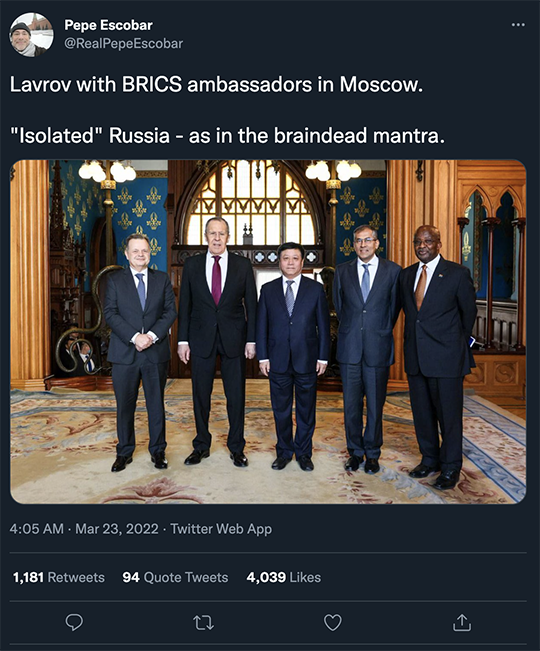 Yes, that’s the Russian foreign minister Sergei Lavrov (second from the left) meeting in Moscow this week with the ambassadors from the other four BRICS nations — Brazil, India, China and South Africa.

Let’s see, those five countries account for over 40% of the world’s population. Also note the governments of India, China and South Africa all chose to abstain from United Nations resolutions condemning the Russian invasion of Ukraine. That doesn’t seem particularly “isolated.”

Here’s what does: We remember the “APEC” summit of Asia-Pacific powers held in Beijing during late 2014. Note the wide shot of the photo op, and then the close-up… 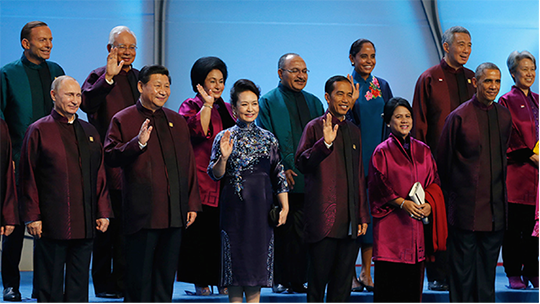 Yeah, there were Putin and Xi Jinping side-by-side… while Barack Obama was positioned next to the leaders of Indonesia and Singapore.

We also cited Asia Times columnist Pepe Escobar: “Washington’s No. 1 objective now is to prevent a full economic integration of Eurasia that would leave the U.S. as a non-hegemon or, worse still, an outsider.”

It was a situation he likened to the years before World War I. He feared “a 1914-style chain reaction of catastrophic blunders — by the West — that could fast spin out of control.”

Welp, you heard it here first…

But in the meantime, the U.S. stock market is still only about 6.25% below its all-time highs.

Bonds are selling off, pushing yields higher: A 10-year Treasury note yields 2.34%. And a portion of the yield curve remains inverted — with 7-, 5-, and 3-year T-notes yielding more.

Leading cryptos continue to show signs of a breakout — Bitcoin approaching $44,000 and Ethereum over $3,100.

Soft data refers to measures of sentiment — usually survey results. Hard data are actual orders, sales and so on.

In the soft data department, we have the “flash PMI” for March — which looks rock-solid at 58.5. Anything over 50 points to growth. Both the manufacturing and services components of this number came in way better than expected — indeed the strongest since last July.

But then, there are durable goods orders — orders for anything designed to last three years or longer, be they home appliances or jet engines. This number dropped 2.2% in February, more than four times the expected decline.

Worse is if you strip out the volatile categories of aircraft and military hardware: Orders for “core capital goods” fell 0.3% — in contrast with expectations for a 0.4% jump.

“Your whole campaign with Jim was way too much smoke,” a reader writes as feedback continues to pour in to our promotion this month for the new Rickards trading advisory Countdown to Crisis.

“Just admit it and move on. Your work is too good not to admit you blow it from time to time.”

Another: “I am also in the camp that felt you overstepped with the hype for Jim’s offer.

“You’ll be able to work out if you got the results, but for me it was a little bit of ‘cry wolf.’ Jim is deliberate, considered and unexcitable by nature – those dour tones infer logic over emotion. We are accustomed to an unflappable legal bean-counter (full respect), and maybe even quite like it.

“Therefore selling hype only waters down the brand and is less likely to make me tune in when there is a really urgent message.

“Just my tuppence worth.”

We’re gluttons for punishment: “Methinks you protest too much when it comes to negative comments about your marketing tactics.

“I’ve been around a long time and seen almost every marketing strategy. Your flood-the-world-style communications and hyped-up language make you come across as carnival barkers or snake oil salesmen rather than serious investment advisers. Urgent this, urgent that… well, not really, we just wanted to get your attention. Deadline for this or that, again just to get attention.

“You’ve conditioned me to ignore promotional materials you send out. I could easily afford your higher-priced offerings. Your marketing tactics give me zero confidence they are even worth trying. It will stay that way until you tone down the rhetoric, plus decide to get to the point quickly (i.e., an executive summary or equivalent first) with the option of hearing more in depth rationale if I am interested. As long as you maintain the reverse approach, I will keep hitting delete.

“All that being said, I appreciate your candid commentary and fully expect you to make decisions you think are best for your organization.”

But wait, what’s this? “So often you only get negative feedback when the rest of your readership is most likely (quietly) satisfied with your approach to marketing,” writes a reader who hit the “Buy Now” button last week.

“I have been listening to Jim long enough to be discerning about the marketing aspects and intelligent enough to get to the essence of a new service like this, to be able to ascertain its value. As to the number of saturation emails I receive, I welcome them! We live in a rapidly changing geopolitical/macroeconomic environment and I want to hear from Jim through your various email blasts/services as often as he is willing to share. So bring it on!

“As for grabbing us by the collar, I’ve always known Jim could sell Ice-9 to Eskimos!”

The 5: How could we not give you the last word today? Heh…