Somebody knew something. Note the date of this Twitter poll posted by Elon Musk… 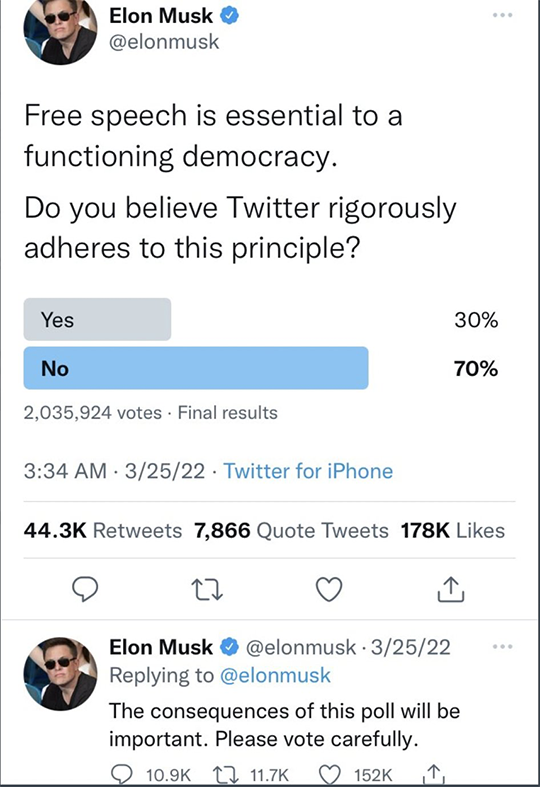 Fast-forward to the big financial news this morning: Musk just disclosed he’s taken a 9.2% stake in TWTR — making him the company’s biggest shareholder.

“We would expect this passive stake as just the start of broader conversations with the Twitter board,” says Wedbush Securities analyst Dan Ives.

Rewind to mid-January: The proprietary indicator we use in our options-trading advisory The Profit Wire began lighting up on TWTR.

The indicator’s formal name is QIT-4. Informally, we call it the “somebody knows something” indicator.

That’s because it detects intriguing activity in the complex market for derivatives — forwards, futures, options, swaps.

And in mid-January, connected insiders were loading up on bullish TWTR bets — ironically, at a time when there was growing talk in Washington about new legislation targeting the social-media giants.

We didn’t know what the insiders knew… but we didn’t have to know, given the indicator’s reliability.

After sifting through the QIT-4 data, our floor-trading veteran Alan Knuckman came up with a simple way retail investors could ride the insiders’ coattails — in-the-money call options on Twitter.

This morning, with TWTR shares opening 23% higher, those options delivered an instant 145% payout. Not bad for less than three months.

Matter of fact, it’s not the first time TWTR has paid off for Profit Wire subscribers. They took another triple-digit gain in mid-2020 — in a little over two weeks, no less.

The Profit Wire is currently closed to new subscribers, but we plan to open it up again later this spring. Stay tuned.

On to our main topic now…

Beware whenever congresscritters crow about legislation that will “help all Americans successfully save for a secure retirement.”

Especially when the legislation passes the House by a margin of 414-5.

The Securing a Strong Retirement Act sailed through the lower chamber last week. The buzz in the Beltway is that similar legislation will pass the Senate comfortably… and a final version will be folded into some sort of “must pass” legislation later this year, like the 2023 budget.

Assuming it’s an all-but-done deal, let’s dive into the highlights.

First, from the employer side: For any business employing more than 10 people, the big deal is a requirement to automatically enroll eligible new hires in a retirement plan and take 3% out of their paycheck pretax.

Meanwhile, the two big provisions from a retirement-planning standpoint — well, the ones touted in most mainstream articles about the bill — are these…

So far, so good, you’re thinking. What’s the catch? There’s gotta be one.

Oh yes there is. And it’s a doozy.

“Starting in 2023,” says a briefing for HR pros from the Society for Human Resource Management, “all catch-up contributions to employer-sponsored plans must be made to Roth accounts, allowing the government to tax these dollars sooner.” [Emphasis ours.]

But not under this bill. If you’re over 50, your catch-up contributions would go into a Roth account… the amount would count toward the current year’s income… and you’d pay the taxes upfront.

So it’s a new stealth retirement tax. Uncle Sugar wants his cut and he wants it now.

Yes, in retirement your Roth withdrawals will be tax-free. Theoretically. But for how long?

For the better part of a decade, we’ve fretted in these virtual pages about Washington trying to undo the bargain it makes with Roth holders — you know, pay the taxes upfront, but all your withdrawals are tax-exempt.

As Steve Forbes wrote in 2013, “Their contributions have been made with after-tax dollars, with the promise that the ensuing benefits would be exempt from federal income tax. Slapping a special ‘emergency’ levy on these assets will become an irresistible temptation for politicians as the pot of assets gets bigger.”

Among the possibilities: The “backdoor Roth” strategy that higher earners use to skirt the income limits on Roth IRA contributions could be scrapped. This notion was tucked into Joe Biden’s “Build Back Better” plan that stalled out in Congress last year.

Or perhaps required minimum distributions would be applied to Roths. Yes, your withdrawals would still be tax-free. But if this is money that you’d otherwise leave within your Roth — perhaps with an eye toward passing it to your heirs — you’d likely move that money to a taxable account. Suddenly, you’re paying tax on dividends, interest and capital gains.

In a more extreme scenario… the appreciation in your Roth, the growth above and beyond your original contributions, could be deemed taxable income.

Maybe none of these scenarios will come to pass. But what’s undeniable is this: Congress keeps changing the retirement rules, often to your disadvantage.

The SECURE Act became law under Donald Trump in late 2019. That law raised the age for required minimum distributions from 70½ to 72. But it also killed the “stretch IRA.” As a result, your heirs are required to clean out the proceeds of your retirement accounts within 10 years of your death.

In 2015, Barack Obama and congressional Republicans conspired successfully to kill off “file and suspend” — a strategy many couples were using to maximize their Social Security benefits.

Now we have the high likelihood that catch-up contributions will be “Rothified.”

And with a national debt of $30.4 trillion and rising… there’s more where that came from.

To the markets — where the yield curve remains inverted, signaling a recession anywhere between six months and two years down the line.

The yield on a 2-year Treasury note this morning is 2.442% — higher than the 10-year yield of 2.408%. As a reminder, it’s not normal for a shorter-term interest rate to be higher than a longer-term rate… unless there’s an expectation of trouble ahead.

➢ Besides Twitter, the other big mover today is Starbucks. Founder Howard Schultz — back in charge for the moment as CEO — has suspended share buybacks, intending to plow the money into growth initiatives.

Yes — expand the business going into a recession! SBUX is down 5% as we write. As it happens, readers of Rickards’ Crash Speculator picked up put options on SBUX last Friday — a trade with 245% profit potential before all’s said and done.

Meanwhile, let’s get an update on prospects for a return to normal in China’s biggest city and a major hub for semiconductors, electronics and automobiles… 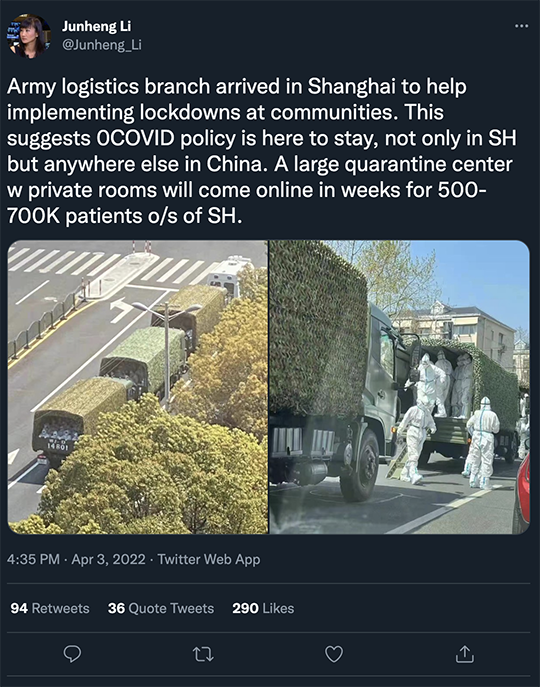 For the record: The U.S. House passed the MORE Act on Friday, providing for full legalization of cannabis coast to coast.

It was an almost party-line vote. In fact, fewer Republicans voted for it this time than in 2020.

A few days ago, our pot stock authority Ray Blanco was cautiously optimistic that this year’s “4/20” would be the last under which cannabis was a prohibited Schedule I substance at the federal level.

Alas, the tide is going out: Forbes says the bill faces “strong headwinds” in the Senate. At least two Democrats — Montana’s Jon Tester and New Hampshire’s Jeanne Shaheen — are cool to the measure.

To the mailbag, and two fervent responses to our Saturday edition about how the “Renewable Fuel Standard” that D.C. implemented in 2005 is making prospective food shortages worse.

(Just goes to show, we never know what’s going to rile people up…)

“I want to make two counterarguments,” writes a Midwest-based agronomist.

“When soybeans are crushed there are two main products — meal and oil. Meal is the primary food item and the primary reason we grow soybeans. It is fed to livestock and humans consume soy meal as meat and eggs.

“A small amount of the soy oil goes into the food chain. The rest, historically, was a waste product and was not used in any way. Biodiesel from soy oil provided a market for that unused oil. I grant that using oil for biodiesel does sometimes impact soybean prices. But the food oil market is very competitive across many different crops, and can easily price itself to ensure demand is met, whether it be from soy, sunflower, canola, etc. Biodiesel and the Renewable Fuel Standard do not impact the availability of soy for food.

“Corn and ethanol, on the other hand, are a much more convoluted story.

“There are issues with the Renewable Fuel Standard, but you can’t look at biodiesel and ethanol in the same light. And I get that lots of people don’t like the Renewable Fuel Standard. The issues are much, much broader than just that the RFS is bad policy. I would argue that the RFS is reactive policy to 100 years of bad food and fuel policy. But we can talk subsidies for Big Oil versus renewable fuels versus food production another time.”

“If only the explanation you presented for blaming the Russia-Ukraine conflict on skyrocketing fertilizer costs were so simple,” another reader writes…

“The researchers obviously didn’t speak with farmers or their suppliers — or at least get the story we’ve been told.

“It’s nothing new that when commodity prices are up, everyone in the ag chain wants a piece of the pie. American farmers’ inputs started escalating last year when domestic fertilizer corps filed anti-dumping charges with the SEC on some of the foreign suppliers. Magically, imports get halted while investigations ensue and they’ve created a supply shortage.

“Russia sanctions have just exacerbated the problem and help further juice the bottom line for our domestic suppliers. Most farmers will have to cut back on the amount of fertilizer they use, consequently produce less per acre and further aid in the diminishment of food supply.

“The dominoes still fall. It’s just a matter of which direction.”

The 5: Our thanks to both readers for the nuance. Good stuff.

Still, a boondoggle is a boondoggle. And RFS is right up there with another creation of the Dubya Bush era — Medicare Part D.

P.S. Two days before Elon Musk disclosed his new Twitter stake, his friend Jack Dorsey — the founder of Twitter who stepped down as CEO in 2021 — put this out to the world… 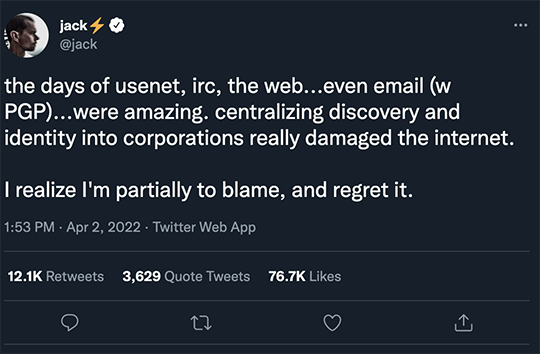 P.P.S. The Profit Wire booked another triple-digit winner today in addition to Twitter — this time on the hydrogen fuel-cell company Plug Power.