“For the first time since September 2020, gold has sustained a level above $1,900 per ounce for a full month,” our macro expert Jim Rickards observes.

“The question for investors is whether this new high is a foundation for a steady increase to levels about $2,000 per ounce, or whether it’s just a tease before another fall into the $1,800 range.

“To answer that question…

“We need to look behind the price chart and ask what’s driving the price… What are the fundamentals?

“Demand follows price spikes rather than causes them,” he notes. “Until prices move quickly to the $2,500 per ounce range or higher, there’s no reason to expect that any disequilibrium in supply or demand will drive prices one way or the other.

“The spikes and dips, driven by computers, cancel out and don’t affect fundamental trends,” he explains. “It’s frustrating for those engaged in real price discovery, but it’s mostly noise.

“Of course, the next day the peace talks end with no progress (risk-on) only to be followed by a Russian declaration that they will not attack Kyiv (risk-off). And so it goes…

“It’s not that the war doesn’t matter,” Jim says. “It’s just that the risk-on/risk-off style of trading is also driven by algos and is mostly noise.

“If supply and demand are stable, and algorithmic trading is mostly noise, what is driving gold prices?” he asks.

“Where gold does best of all is when real yields are negative,” Jim says. “That’s the situation we’re in right now.

“Interest rates on 10-year Treasury notes are 2.4%. Inflation is 7.9%. That means the real rate of interest on the Treasury note is negative 5.5%. That’s how much the note holder is losing to inflation.

“This is where the Fed enters the equation,” says Jim. “Even if the Fed raises rates as advertised, rates would still be negative 5.65% at year-end, assuming inflation stays where it is.

“In theory, the Fed would have to raise rates to 8.0% or higher in order to push real rates into positive territory. Of course, if the Fed persisted in that course,” Jim says, “it would crash stock markets and push the economy into a severe recession

“If the Fed remains behind the curve, inflation will rip, real rates will remain deeply negative and gold will have huge real returns because of inflation,” Jim says. “If the Fed pushes too hard to catch up, it will sink the economy and have to reverse course, in which case those new rate cuts will help gold also.

[Note: In 2006 — two years before the Panic of 2008 — Jim Rickards warned the U.S. intelligence community that a financial crisis was brewing.

Jim’s thesis was so in-depth, it was featured in the CIA journal Studies in Intelligence. He even supplied the Treasury Department with a plan for averting the crisis called: “Proposal to Obtain and Manage Information in Response to Capital Markets Crisis.”

Regrettably, no action was taken.

Now Jim is back in D.C., making another startling prediction — this time, directly to our readers. And if he’s right, he just released the “death date” for the entire U.S. stock market. (Hint: It’s coming sooner than anyone anticipates.)

If you own stocks, bonds, mutual funds or crypto, watch Jim’s presentation today.]

For the record: Global food prices in March were up 13%… over February’s already record-setting high.

The United Nations Food and Agriculture Organization is out with its monthly Food Price Index. At 159.3, the number is the highest reading since the FAO started tracking data in 1990. A number that’s quite literally off-the-chart… 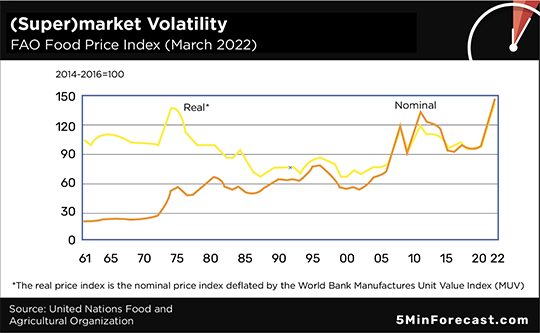 The big drivers in the last month were vegetable oils and wheat, up 23% and nearly 20% respectively, the wheat increase directly related to Russia invading Ukraine, considering the two countries account for 30% of global wheat production.

“Even before the Ukraine invasion, markets were already turbulent as investors began to worry about higher inflation and rising interest rates,” says our retirement-and-income specialist Zach Scheidt.

To adjust to rising inflation in the U.S., “the Federal Reserve has already committed to raising interest rates,” he says.

“Higher rates naturally attract capital from international investors. After all, the U.S. is still one of the safest countries from political and economic perspectives.

“All of that capital has helped to drive the value of the U.S. dollar higher. Just take a look at the chart below… 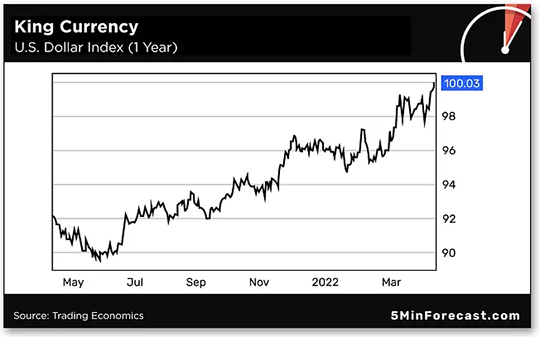 “As the value of the U.S. dollar increases, it naturally helps companies that do more business here in the United States,” says Zach.

“And it can be a headwind for American companies that sell a large number of goods and services abroad.

“With the U.S. dollar picking up momentum, I want to highlight three American stocks that should benefit from this trend…

“The company’s sales, earnings and dividends have been increasing steadily,” he says. “Meanwhile, the company has used some of its extra cash flow to buy back shares of stock.

“This helps investors by reducing the number of shares outstanding. So each share now represents a larger portion of the overall company.

“Shares of TSCO pulled back in late February alongside the overall market. But the stock has quickly rebounded and is within striking distance of its all-time high,” he notes.

“I’m encouraged by the relative strength of this domestic company…

“Our second American stock pick is Alexandria Real Estate Equities (ARE),” says Zach. “This real estate investment trust has built seven high-tech campuses in some of the most important U.S. regions for innovation,” he says, scattered from Boston to Seattle.

“ARE caters to tenants in the life science industry along with other cutting-edge science and technology areas,” Zach continues.

“And unlike other professional office REITs that may face challenges from telework, this real estate company operates in high-tech industries.

“Tenants are willing to sign long-term leases and will continue to use ARE’s properties because of the high-tech equipment.

“Best of all, investors currently receive a 2.4% yield on top of any gains from shares of ARE moving higher,” he says. “That’s cash you can use to reinvest in new shares or to cover day-to-day living expenses…

“Our third U.S.-based company is Bank of America (BAC),” Zach says, “which should benefit from rising interest rates in the year ahead.

“Shares of BAC pulled back earlier this year,” he concedes, “as investors worry about a pullback in the overall economy.” But data still shows that the U.S. dollar is king.

“And BAC shares have already started to recover in recent weeks, rebounding from what should ultimately be a key area of support.” Plus? “The stock currently pays a 1.9% dividend yield.

“So in the fight against inflation,” Zach closes, “higher interest rates should drive profits for these three companies. Consider adding one — or more — to your portfolio today.” 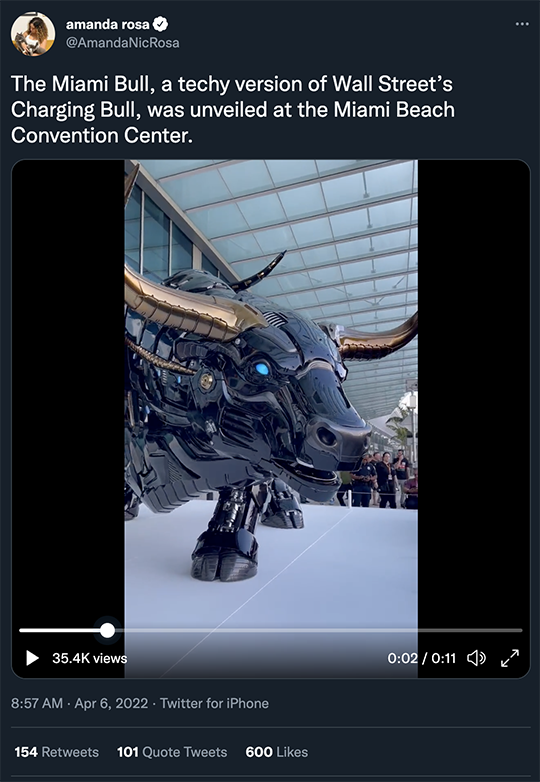 The 3,000-pound Transformer-like monstrosity — modeled after its bronze Wall Street counterpart — went on display Wednesday at the Bitcoin 2022 conference.

“Welcome to the future of finance,” said Miami Mayor Francis Suarez with a flourish… as he unveiled the animatronic, laser-eyed behemoth before a crowd expected to swell to 30,000.

In participation with crypto mining platform CityCoins, the south-Florida city launched the currency known as MiamiCoin (MIA) in August 2021.

“With MiamiCoin, what we’re doing is potentially creating a currency [where] a percentage of the mining is automatically going to the city… It’s going to redefine how cities are funded.”

So what’s in it for Miami? “Every time somebody mines a MiamiCoin, the city gets a 30% donation,” says Yahoo Finance.

“When you think about the possibility of being able to run a government without the citizens having to pay taxes — that’s incredible,” Mayor Suarez gushed.

“By February, that promise seemed to be coming true, when the mayor proudly announced the scheme’s first disbursement of $5.25 million, which was promptly spent on a rental assistance program,” reports Tech Monitor.

“Since [its high point in September], however, the value of MiamiCoin has tanked by 92.76%.”

(“Man I wish I wouldn’t have sold my car for it at this point,” one Miami resident lamented on a CityCoins server. We sincerely hope he was just trolling MIA.)

Tech Monitor notes: “Miami commissioners had only a limited understanding of MiamiCoin and the municipality’s relationship with CityCoins.”

And once-confident Mayor Suarez is having second thoughts. “I don’t know whether it’s going to work or not,” he says. “Innovation doesn’t always work.”

Sounds like a real cock and bull story, right? But proof MiamiCoin was dodgy from the start was hiding in plain sight… what with an acronym like MIA.