Boy, those economists are really sticking their necks out there…

“The Federal Reserve is expected to deliver two back-to-back half-point interest rate hikes in May and June to tackle runaway inflation,” according to Reuters — which polled more than 100 economists last week.

Besides, the Fed made clear last week — in its carefully massaged “minutes” from the March meeting — that it’s half-point increases from here on.

The Fed telegraphs its intentions routinely. Not a lot of guesswork there. “The analyst,” says our macro maven Jim Rickards, “merely has to pay close attention to what the Fed is saying (both formally and in speeches and interviews), listen for Fed-speak code words (like ‘patient’ and ‘transitory’) and take them at their word.

“The hard part is understanding why the Fed is misguided, why their policies will fail and the implications of that failure for markets and investor portfolios,” Jim adds.

Which brings us to another intention the Fed telegraphed last week — the plan to shrink its swollen balance sheet to the tune of $95 billion a month.

In reality, Jim says it’ll work out closer to $80 billion. Running off the Treasuries on the Fed balance sheet is easy — just collect payment on its existing T-bills when they mature and don’t buy new ones.

But mortgage-backed securities are another matter. The maturities are longer — up to seven years. So they don’t run off as quickly — “especially when interest rates are rising and homeowners are not refinancing their mortgages due to higher rates,” Jim says.

“The Fed will be reluctant to sell MBS because that could make mortgage rates go even higher. So they will probably sit tight in the MBS market for the time being and simply not hit the cap.”

But whether it’s $80 billion or $95 billion, it’s a lot — especially when combined with half-point rate increases, something the Fed hasn’t done in this century.

“On the whole,” says Jim, “this will amount to an extreme form of monetary tightening especially relative to the last tightening cycle in 2015–2018.

“Of course, the question for investors is whether these actions will reduce inflation or hurt the stock market.

“The answer is no, it will not reduce inflation and, yes, it will hurt stocks,” says Jim.

“A negative rate of that size doesn’t stop inflation,” says Jim — “it feeds it.”

“The only way either one of those scenarios can play out,” says Jim, “is if the U.S. enters a deep recession.”

Well, OK, he says there’s one other way: “That’s where the Fed starts to raise rates, the stock market goes wobbly and the Fed loses its nerve and stops the rate hikes before the market completely falls apart. That’s what happened in December 2018 after the Christmas Eve Massacre when stocks fell 3% in one day to top off a 20% crash in the fourth quarter.”

But if that happens, it won’t happen for several months. For now, the course is set.

“Our expectation is that the Fed will continue down its aggressive rate hike path at least through the summer, that inflation will continue to surge and that stocks will perform poorly.

“By September, a critical juncture will arrive. Will the Fed continue to tighten and sink stocks, or will the Fed lose its nerve and let inflation rip?”

Sorry, too many variables between now and then to give you a firm answer. Anyone who claims to have a firm answer is blowing smoke.

Still, there are steps you can take right now to prepare yourself for any of these outcomes — so that when this critical juncture arrives in September, you’ll be ready.

That’s what Jim helps you do in his new premium advisory called Countdown to Crisis — using a time-honored strategy proven successful during every severe market downturn for over 100 years. Click here to learn how it works.

Wall Street is picking up the new week where it left off the old one — with an orderly sell-off continuing apace.

Traders are shrugging off the news Elon Musk won’t be joining Twitter’s board after all; TWTR is down 0.2% at last check. No, we don’t have any brilliant insights into what happened — other than being the richest person in the world buys yourself a lot of leeway to be flighty.

Precious metals are rising and testing stubborn resistance levels — gold a little over $1,950 and silver a hair below $25.

Cryptos are struggling mightily — Bitcoin back to mid-March levels around $41,000 and Ethereum threatening to break below $3,000. 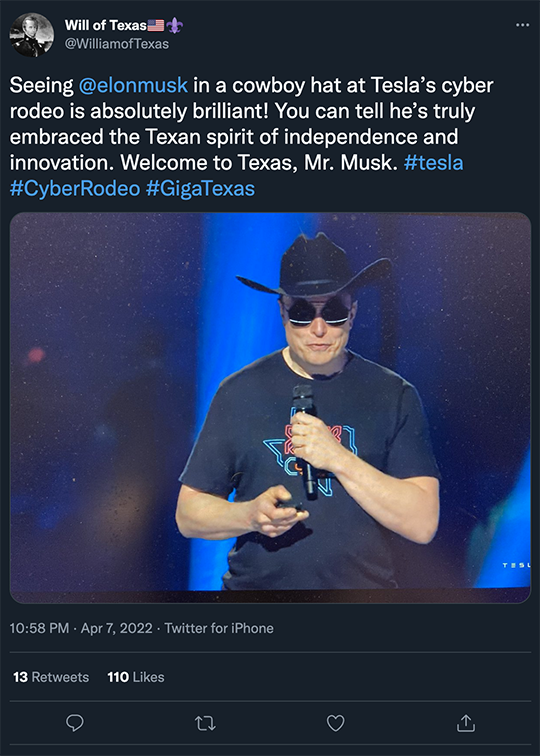 Tesla hosted a “Cyber Rodeo” last Thursday to mark the opening of its newest assembly plant in Austin, Texas — which Musk promises will crank out up to 500,000 vehicles per year.

Electric vehicles may be the future… “but simply getting rid of the oil-based supply chain in favor of clean-running electricity simply replaces one critical resource and supply chain headache with many others,” points out our science-and-wealth specialist Ray Blanco.

“EVs might not burn gas, but they are dependent on a long train of globally sourced and sensitive resources like lithium, nickel, rare earth elements, graphite and cobalt. 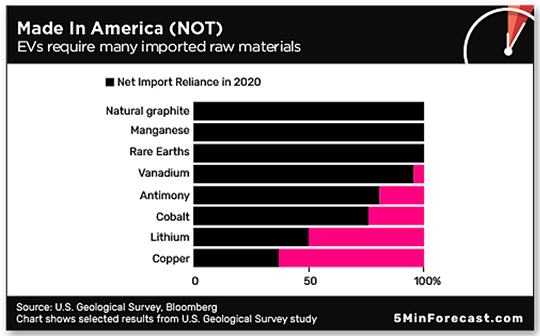 “If the country is going to hit its vehicle electrification goals,” says Ray, “it will need to do much more than build assembly plants for Tesla Model Ys. It will need a crash course of investments in everything from critical raw material extraction and finishing, to vehicle charging facilities, to increased energy production.”

With that in mind, the Biden administration recently invoked the Defense Production Act — first enacted during the Korean War.

The aim — “to increase domestic production of minerals needed for the manufacture of electric vehicles and, critically, their batteries. Bringing the provisions of the act to bear will improve access to capital for domestic sources of battery materials.”

Of course, bureaucrats issuing grand proclamations is no guarantee the job will get done.

Look at that chart again and zero in on lithium. Even if more American production were possible, it wouldn’t solve a global problem.

“There simply isn’t going to be enough lithium on the face of the planet, regardless of who expands and who delivers. It just won’t be there,” says Stuart Crow, chair of the Australian lithium producer Lake Resources.

“The carmakers are starting to sense that maybe the battery makers aren’t going to be able to deliver,” he tells the Financial Times.

“Right now China owns basically 70–80% of the entire supply chain for electric vehicles and lithium-ion batteries, and therefore energy storage,” Crow continues. “The West has been remarkably slow to adopt a strategy to try to assist and secure a supply chain.”

Good news for Crow’s company, and if you’re wondering it does trade in America — albeit on the pink sheets as LLKKF. If you’re looking for a play that’s a bit less speculative, Ray Blanco is on the case. Stay tuned…

When even an expert can’t make heads or tails of this chart, it might be time to worry… 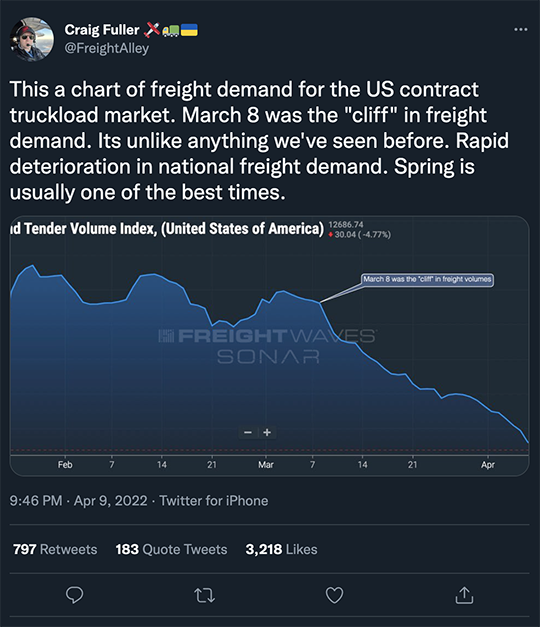 The writer there is Craig Fuller, who founded the FreightWaves website and American Shipper magazine.

What gives? “We believe it’s more of a domestic problem and the big China impact hasn’t shown up in the market yet,” he says. In other words, Beijing’s obsession with zero-COVID and the current lockdowns in Shanghai and elsewhere do not account for that drop.

Instead, it appears to be a matter of falling demand stateside. Which means either warehouses are full-up with inventory, consumers are tapped out or both. Fuller can’t say. We shall see…

“No self-serve stations in Europe?” says an incredulous entry in our mailbag.

“Curiously, I’m not sure the reader who wrote in last week has been to Europe anytime in the last 25 years.

“My wife is European and we’ve been going together annually (except during that damn COVID thing!) since 1994 to visit family while always taking additional time each year to visit a variety of countries from Portugal to the Balkans to the Baltics (even to Ukraine a couple of times) and all points in between.

“EVERY country throughout the continent has self-serve petrol stations.

“That doesn’t really change the overall message of your reader’s comments, but that one element of his argument is certainly misleading and untrue.

“Thanks for all you do!”

After our main topic last Thursday, exploring the intersection of central banking and corporate media, a reader writes…

“I know you have touched on this before but in light of current events this reporting on the Fed shows why many are cynical and skeptical of anything coming out of our capital. The big banks get these big loans — and Wall Street gets its sweet tooth satisfied.

“You guys do a good job of showing why we need independent journalists out there exposing the bull#&*% of the media and psyops propaganda from the government.

“I’ve been a conservative all my adult life — but not as right-wing as I used to be. Age (mid-60s) and experience in the work world change one’s perspective.

“Thanks for your work.”