The News Is a Psyop

Please examine everything about this social media screenshot closely. It’s about a month old… 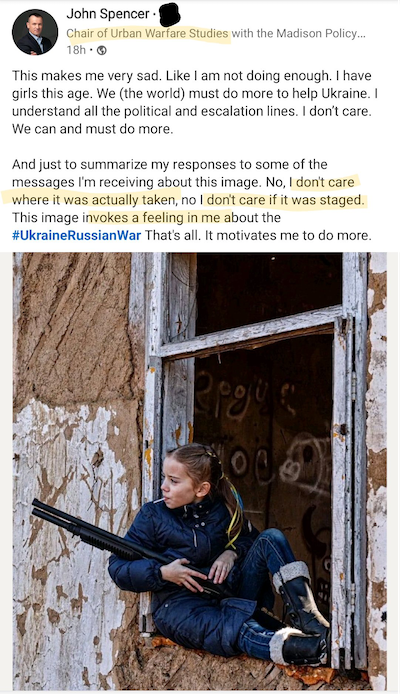 So yeah, that’s a retired Army major now working for a think tank — one that does not disclose its funding sources on its website, by the way. Defense contractors? Foreign governments?

No matter: The likes of CNN and MSNBC regularly turn to him as an “expert analyst” on the war in Ukraine. 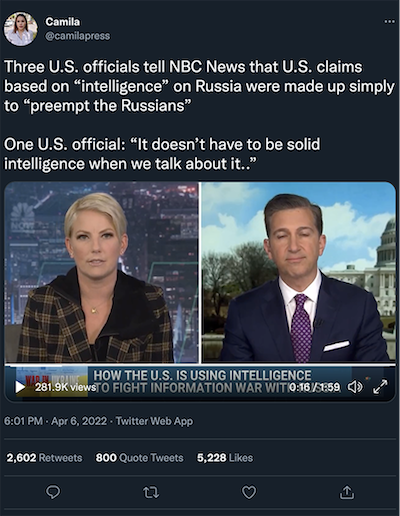 Turns out there was nothing to the claim last month that Vladimir Putin was about to unleash chemical weapons on Ukraine, or the claim that Moscow had asked China for military help. Washington purposely spewed this bilge in the interest of “information warfare.”

“Multiple U.S. officials,” according to NBC News, “acknowledged that the U.S. has used information as a weapon even when confidence in the accuracy of the information wasn’t high. Sometimes it has used low-confidence intelligence for deterrent effect, as with chemical agents, and other times, as an official put it, the U.S. is just ‘trying to get inside Putin’s head.’”

OK, then what are we to make of the story three days later that Putin “may use the Biden administration’s support for Ukraine as a pretext to order a new campaign to interfere in American politics”?

That was according to The Associated Press, in yet another instance of what passes for “news” these days — anonymous officials citing secret evidence, retailed by stenographers who pass for “reporters.”

So is this just another attempt to mess with Putin? Or are we supposed to take this one super-seriously because Russia Man Bad?

See what I meant last week when I said we’re living in the midst of “a giant hall-of-mirrors mind**** psyop?”

“Psychological operations (PSYOP),” per Wikipedia, “are operations to convey selected information and indicators to audiences to influence their emotions, motives and objective reasoning, and ultimately the behavior of governments, organizations, groups and individuals.”

That’s a better definition than you find in online dictionaries, which tend to describe the intended audience as “foreign” or “the enemy.”

Long ago when I was still working in the TV news racket, a scandal broke out at CNN and NPR.

This story goes back to the Kosovo war of 1999, when Bill Clinton bombed Serbia for 78 straight days. The two networks took on a total of nine Army psyops officers as unpaid interns — all from the 4th Psychological Operations Group at Fort Bragg, North Carolina. The CNN interns worked at network headquarters.

We’d have never known about it were it not for a Dutch newspaper, Trouw, that broke the story in February 2000. An embarrassed CNN promptly canceled the internship program.

“Maybe CNN was the target of a psyops penetration and is still too naive to figure out what was going on,” mused the late journalist Alexander Cockburn. “In the Kosovo conflict, as with other recent wars, CNN’s screen was filled with an unending procession of bellicose advocates of bombing, many of them retired U.S. generals.”

Fast-forward a generation, and the deep state no longer has to go about its media infiltration in secret. The “intelligence community” and corporate media work hand-in-hand.

For the most part, the media uncritically peddled the Cheney-Rumsfeld line — can’t let that smoking gun be a mushroom cloud, you know.

If you wanted the truth, you had to explore the foreign press online. Or if you were lucky you came across the skeptical reporting of the now-defunct Knight Ridder newspaper chain — acts of journalistic courage adapted for the big screen by director Rob Reiner in 2017’s Shock and Awe.

Otherwise, you were among the 69% of Americans who in September 2003 — six months after the invasion of Iraq — still believed Saddam Hussein had a role in 9/11.

It was the instant I saw those poll numbers that I knew my chosen profession had failed spectacularly at its most solemn responsibility.

“Only a free and unrestrained press can effectively expose deception in government,” wrote Justice Hugo Black in the 1971 Pentagon Papers case. “And paramount among the responsibilities of a free press is the duty to prevent any part of the government from deceiving the people and sending them off to distant lands to die of foreign fevers and foreign shot and shell.”

“Normal expectations are that wars are always more newsworthy in America when American lives are at risk,” writes researcher Andrew Tyndall — but the current conflict “has overturned all normal patterns of journalistic response.”

Since 1987, the Tyndall Report has quantified the coverage of the three network newscasts that air at 6:30 p.m. Eastern Time.

Yes, they’re dinosaurs, watched far less than they were in the early Rather-Jennings-Brokaw years when Tyndall launched his project. But they still reach 20 million people on a typical weeknight — far more than the cable channels’ prime-time fare. And their dominant demo is the over-65 set that votes in the highest numbers.

Tyndall finds they devoted 562 minutes of coverage to the war’s first full month.

“Astonishingly,” Tyndall writes, “the two peak months of coverage of the Iraq War each saw less saturated coverage than last month in Ukraine (414 minutes in March of 2003 and 455 minutes in April).”

If the quantity is astonishing, the quality is appalling: In this war, the media — like the “urban warfare expert” above — are peddling the line that the truth doesn’t even matter.

As you might recall, bogus stories and viral videos abounded in the war’s earliest days. There was the heroic “Ghost of Kyiv” fighter pilot, some of whose exploits were derived from a video game. Then there were the 13 Ukrainian soldiers defiantly fighting to the death at a place called Snake Island — except, no, they were captured by the Russians.

When the longtime internet debunking site Snopes tackled one of those instances, it got pushback on social media.

The Times piece concurred: It’s all good, “as Ukrainians try to keep morale high among the fighters and marshal global support for their cause.”

That brings us to the inflation numbers with which we started yesterday’s edition (hey, we haven’t forgotten our money-and-markets beat)… 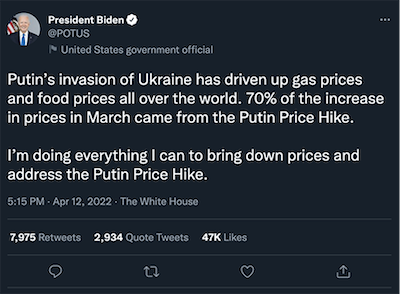 Our own macro maven Jim Rickards was aghast: “No one in America believes inflation has anything to do with Putin,” he tweeted. “It was here before the war and will remain after.”

Alas, we fear Jim has underestimated the gullibility of Boobus Americanus: An ABC News/Ipsos poll conducted last Friday and Saturday finds 71% of Americans believe Putin bears either “a good amount” or “a great deal” of blame for “the recent price increases in gasoline.” (Oil companies aren’t far behind at 68%.)

Whelp, the White House and the Establishment media machine had to try out something different after its line a couple of weeks ago fell flat… 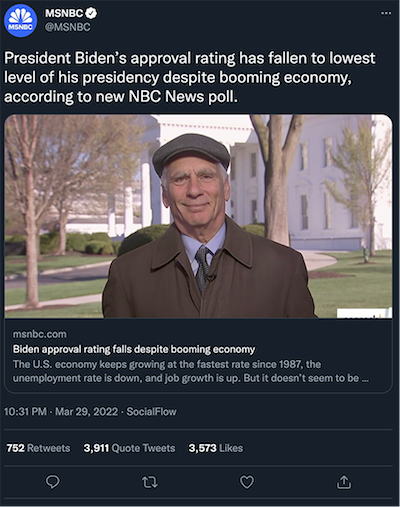 As an honest lefty on Twitter responded, “I think Democrats should run on the slogan ‘Actually the economy is great and you’re wrong to be upset.’” Heh…

Around that same time in late March, the dean of statehouse reporters here in Michigan — he’s been at it since 1970 — ran with the same line on the many media outlets that give him a platform.

Interviewing no one other than a university economist, he concluded that sunny statistical aggregates outweigh the lived experience of frustrated citizens — whose attitude he summed up as, “Don’t confuse me with the facts, my mind is made up.”

Earlier this week, it appeared the Biden White House was going to shift tactics to what the Bush White House tried in 2008 when gasoline was also above $4 a gallon — point to the “core” inflation rate.

The core rate excludes food and energy, on the theory those prices are “volatile” and skew the longer-term averages. But again, there’s that pesky real-world experience thing — which is why some wags skewer the core rate as “inflation for people who don’t eat and drive.”

As Politico wrote in its “Morning Money” column on Monday, “while the top-line number will undoubtedly be high, the White House is hoping there will be signs for optimism in core CPI… If core CPI does tick down, that could be a positive signal that macroeconomic factors feeding inflation are starting to ease.”

The core number did come in on the (relatively) cool side, but White House chief of staff Ron Klain saw those poll ABC/Ipsos poll numbers we mentioned earlier, so “Putin Price Hike” it was.

What no media outlet will tell you is there’s ample blame to go around for present circumstances: Even going by the official numbers, inflation looks awful… 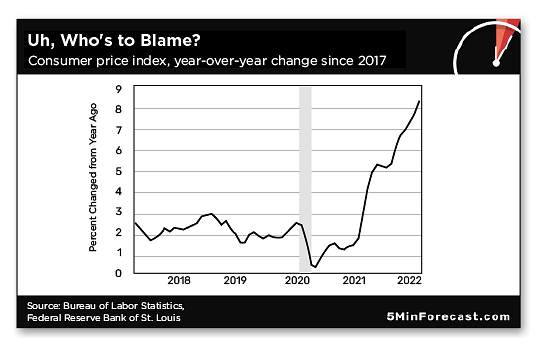 Careful drawing too many conclusions from that chart, though: We’re seeing conservatives pin the blame solely on Joe Biden, seeing as the jump began around the time of his inauguration.

But it was Donald Trump who ran up a trillion-dollar deficit while the economy was still relatively healthy… who caved to the “experts” demanding the economy be shut down… and who signed $3.1 trillion in pandemic “stimulus” bills while still in office.

Biden took the baton, but it was Trump who handed it to him.

No mention of the Federal Reserve — which miscalculated to catastrophic effect last year. Just over a year ago at its March 2021 meeting, the Fed projected its preferred inflation rate would be 2.2% at year’s end.

The reality was more than twice that — 4.9%. Too, the Fed stuck with its line about inflation being “transitory” as late as last November. It persisted with near-zero interest rates and an ever-expanding balance sheet — changing course only one month ago.

Even an uber-Establishment figure like the economist Mohamed El-Erian conceded it was “the worst inflation call in the history of the Federal Reserve” going back to its founding in 1913.

For a little while early this year, Joe Biden was promising the Fed would do the job of getting inflation under control. Seeing how that’s not going to work out, the new cure-all is “blame Putin.”

And the media play along. After all, they’re certain they’re working in service to a worthy cause: “Why can’t we just let people believe some things?”

P.S. The markets today, you ask? Nearly everything is rallying.

The major U.S. stock indexes are all up, the Nasdaq by nearly 2%. Bonds are rallying, pushing yields lower. Gold is only $22 away from $2,000. Crude is back above $104. Cryptos are generally in the green.

The only really sour note is the start of earnings season: JPMorgan Chase booked a 42% drop in quarterly profit thanks to what CNBC euphemistically calls “market dislocations fueled by Russia sanctions.”