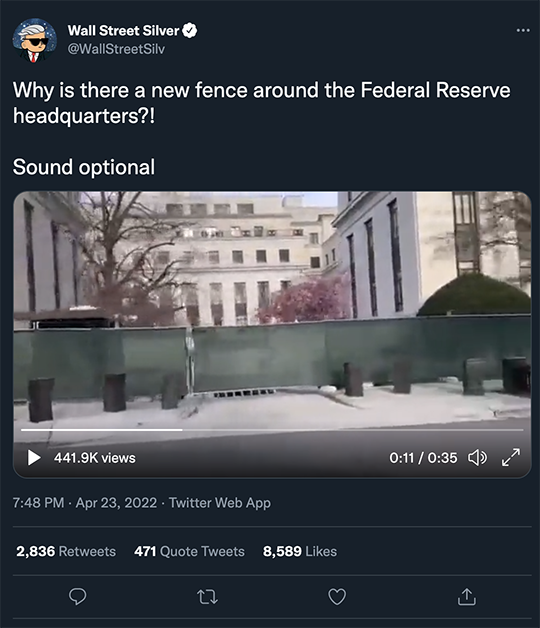 Well, let’s bring it back to a point we’ve been making here all year: Jerome Powell is the first Federal Reserve chairman since Paul Volcker who’s under pressure from the White House to get inflation under control.

Volcker’s strong medicine back in 1979 worked… but the side effects were unavoidable and undeniable.

That underplays the backlash: On Dec. 7, 1981, a guy marched into Fed headquarters armed with a pistol, a shotgun and a knife.

James von Brunn was his name; he intended to kidnap members of the Fed. He also had a phony bomb, prompting the building’s evacuation. “Von Brunn told officers he was upset over high interest rates and the state of the economy,” according to a CNN retrospective. He went to prison for six years.

OK, so he was also a neo-Nazi nutball who decades later shot and killed a guard at the Holocaust Museum in Washington. The point stands. Von Brunn had an economic grievance — and a willingness to act it out.

Granted, the Fed hasn’t tanked the economy this time the way it did from 1979–82. Not yet.

Unlike then, the Fed is still operating under the illusion it can pull off the proverbial “soft landing” — tightening monetary policy just enough to bring inflation under control without crashing the economy, the markets or both.

Late last week, Powell said the Fed’s Open Market Committee will raise short-term interest rates by a half percentage point during its next meeting on May 4.

He’s said as much for over a month now; we’ve chronicled it in these digital pages. But for whatever reason, the Wall Street consensus was that he didn’t mean it.

Now, however, he’s said it repeatedly enough or loudly enough that the message has sunk in. Thus, the Dow tanked nearly 1,000 points by day’s end on Friday. And get a load of this “heat map” depicting every company in the S&P 500… 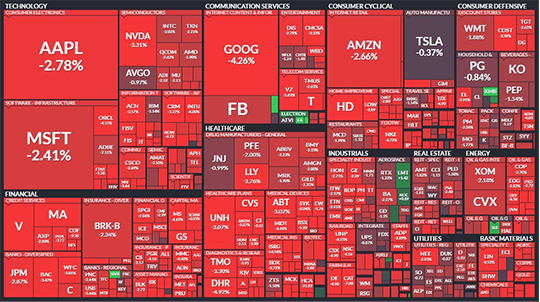 And so the “soft landing” thesis is quickly going by the boards. No one captured the mood on Friday better than Mr. Buy-Netflix-at-the-top himself… 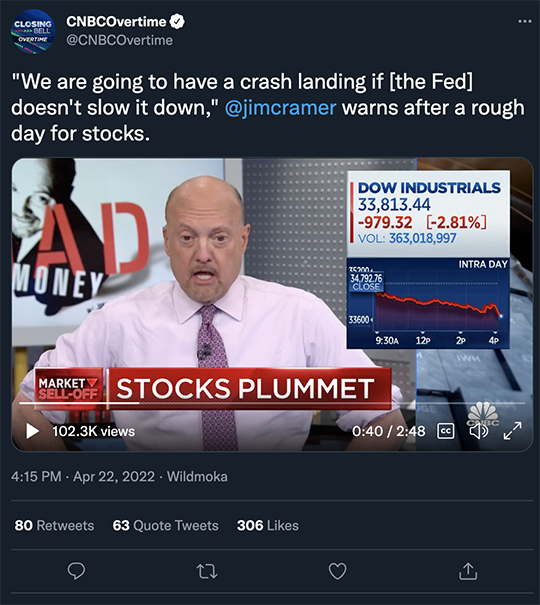 Because that’s what the trade in fed funds futures is pointing to this morning. Indeed, that activity points to a fed funds rate of over 2% come the end of July… and over 3.5% by mid-2023. (Right now, it’s still not even 0.5%.)

Meanwhile, the consensus among Wall Street economists surveyed by Bank of America is that the Fed won’t even get to 2% before changing course.

In other words, Wall Street is in for a rude shock.

But that’s how it happens nearly every time. Our Jim Rickards has done the research going back more than a century. The Fed almost never pulls off that soft landing… but Wall Street still expects it time and again, like Charlie Brown figuring Lucy will let him kick the football for once.

Thing is, if Wall Street is going to be caught off-guard, you don’t have to.

You can be hip to market history… and act in front of it before the mainstream panic really sets in and we have day after day of red-soaked heat maps like the one above.

Click here to let Jim walk you through this history and what you need to do to prepare. Watch it now because events are moving so quickly that the presentation could soon be out of date. (In fact, I just got word we’re taking it down at midnight tonight. Here’s the link again.)

So about the market slumping again today: All the major U.S. stock indexes are in the red and it’s the S&P 500 down most, about 1.25%.

As the week wears on, earnings will be in view: The three biggest publicly traded U.S. companies are all set to report their numbers — Microsoft tomorrow, Apple and Amazon on Thursday.

But for today, the buzz is about Twitter — where suddenly it seems the board is warming up to Elon Musk’s offer to buy the company outright.

Officially, the story is that the board is receptive to the idea now that Musk has lined up proper financing and he’s not just blowing smoke. The media are referring vaguely to “feedback from shareholders.”

We can’t help wondering if that feedback amounts to, “Yo, board members — Elon’s offering a substantial premium on the current share price and now we know he can pay up. If you turn it down, we’re going to sue you into oblivion.”

Even with TWTR rallying nearly 4% after this weekend’s developments, shares still trade under $51… and Musk is offering $54.20.

Crude prices have slumped to their lowest in two weeks — perhaps because China’s zero-COVID obsession is getting worse.

“China’s capital Beijing has begun mass testing and shutting down residential and business districts amid a new virus outbreak of 40 cases since Friday,” reports The Associated Press. “Residents were staying in and stocking up on food in case they are confined to their homes.”

To be sure, it was a lousy day for Asian stock markets — the Shanghai Composite closing the day down 5%. It’s logical to deduce a spillover effect in oil, on the assumption of lower demand; at last check a barrel of West Texas Intermediate is down $5.57 to $96.50.

Elsewhere in the commodity complex, precious metals are getting absolutely whacked — gold now a few bucks below $1,900 and silver slumping to $23.63.

Cryptos are rallying, but they remain below round-number support of $40,000 Bitcoin and $3,000 Ethereum.

That’s what she said late last week to reporters in Washington.

Yes, all else being equal, she says Europe should cut its reliance on Russian energy, and it would be fine and dandy to cut off Russia from its energy revenue. “But we need to be careful when we think about a complete European ban on, say, oil imports.”

As it happens, JPMorgan Chase warned last week that an instant ban on European Union imports of Russian oil would send crude prices up to $185 a barrel.

That would be very inconvenient a few months before the U.S. midterm elections, no?

And as for China… 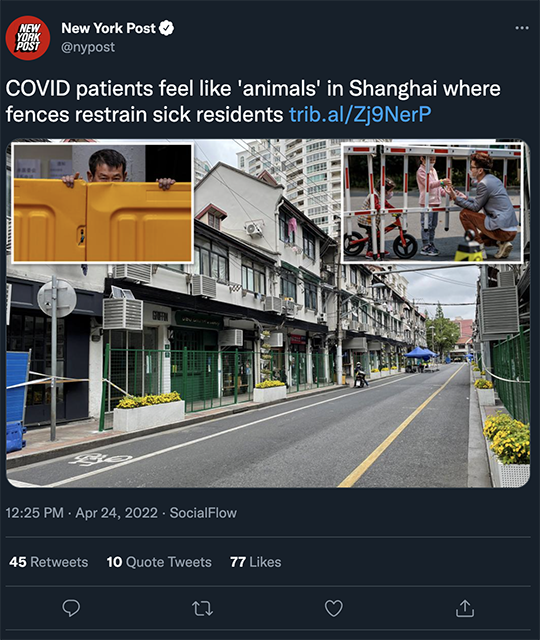 No, the dystopia known as Greater Shanghai hasn’t gotten any better since our Saturday edition.

“Shanghai authorities erected high fences outside the homes of residents who tested positive for COVID-19,” says the New York Post, “prompting outcry on social media that people were being treated like animals amid the city’s harsh lockdowns.

“Images and videos of workers in hazmat suits fencing off buildings with 6-foot-tall green metal bars made the rounds on the Chinese social-media site Weibo, where users also complained the structures were fire-safety hazards.”

In response, the BBC informs us that “Chinese internet authorities are trying to block a popular video highlighting the impact of Shanghai’s five-week lockdown on its residents.”

It runs about six minutes and spotlights the misery: “We haven’t eaten for days now,” says one person. “This virus can’t kill us. Starvation can,” says another.

And so began a game of online whack-a-mole — the authorities deleting the video from highly followed accounts on Weibo and WeChat, but other users quickly reposting it.

“The video was just presenting raw facts,” one user complains. “There is nothing provocative!”

What was it John Adams said about facts being stubborn things?

“Experience is a teacher who is never underpaid,” a reader writes after we solicited feedback to our Friday edition.

“The experience people got from 1929 was reflected in the Glass-Steagall Act, and the fact it took 70 years for Congress and the president to repeal it is testament to its wisdom.

“Anyone who has had to borrow from a Wall Street bank for a car loan or home loan can easily see the wisdom of keeping commercial banking and investment banking separate. From 2008–2016, my local bank prospered on money from the Fed while adamantly refusing to loan to local businesses, which had supported them for years.

“While the likes of JPM foreclosed on your loans, you got to sit next to your local banker at ball games, funerals and weddings whilst he shook his head and said: ‘Gee, that’s tough.’

“Those people in the 1930s learned a hard lesson. I sure hope we don’t have to learn it all over again.”

The 5: Just wait until we have another crisis in the repo market as we had in the fall of 2019.

’Cause it’s gonna happen again. Alas, that’s a topic we’ll have to leave for another day.

“Glass-Steagall is a red herring. The 2008 financial crisis would still have happened even if Glass-Steagall hadn’t been repealed,” another reader counters, complete with an article he submits as supporting evidence.

“The primary cause of the housing bubble was the Fed’s loose monetary policy combined with the government’s aggressive promotion of home ownership via policies that incentivized banks to underwrite mortgages for people who couldn’t afford them. Once the Fed tightened monetary policy, the collapse was inevitable.

“As for using antitrust against Big Tech, what do you think that is going to accomplish? Although I’m sure you can think of a way to regulate the Big Tech platforms that would make them more open, I know you’re not naïve enough to think that this kind of regulation would actually accomplish that. The Democrats control Congress right now, and most of them want the tech platforms to impose more speech restrictions, not fewer.”

The 5: C’mon. If the banks didn’t have the implied taxpayer backstop that was expanded under Glass-Steagall, there’s no way they’d have underwritten mortgages for people who couldn’t afford them.

And even if they did, there would have been no incentive to bundle those mortgages into securities that they sold to investors — frequently, other banks! — laughing to themselves about the “s***ty deal” they just made.

Anyway, we have no illusions that the Big Tech antitrust legislation would bring about a flowering of free expression online. It’s just that when deep-state types like James Clapper, Leon Panetta and Jeh Johnson say the bill threatens their concept of “national security”… well, it’s hard not to line up on the other side.