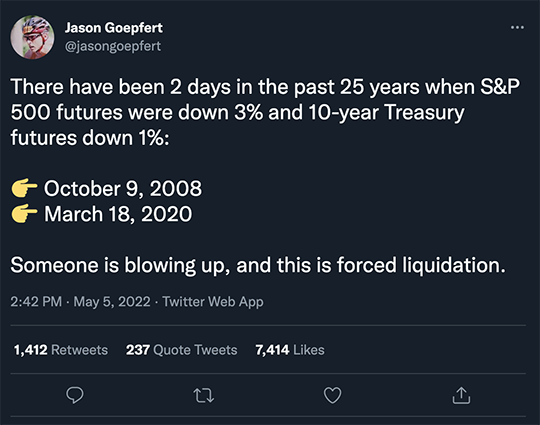 Exactly who’s blowing up is a mystery — at least as we write this morning.

Nor has the bleeding stopped today — although stocks are recovering from another “whoosh” down at the open.

The S&P 500 is likewise down a half percent at 4,126. That’s about five points below last Friday’s close, which marked the low point so far this year. Today’s closing level will be, well, interesting.

“How much money is the Plunge Protection Team pumping into the market these days?” a reader muses.

Hard telling… but it might have staged an intervention around 10:00 a.m. EDT.

Bonds are selling off as well, pushing yields higher: A 10-year Treasury note is up to 3.1%, once again a level last seen in November 2018.

Cryptocurrencies? Down again, Bitcoin barely holding the line on $36,000 and Ethereum about to crack below $2,700.

Crude is back above $110 for the first time in over a month.

It seems the stock market is taking a “good news is bad news” view of the monthly job numbers, out this morning.

The wonks at the Bureau of Labor Statistics conjured 428,000 new jobs for the month of April — a respectable figure, and a bit better than expected.

But from Wall Street’s standpoint, that’s bad news — because it won’t do anything to dissuade the Federal Reserve from continuing to raise short-term interest rates. 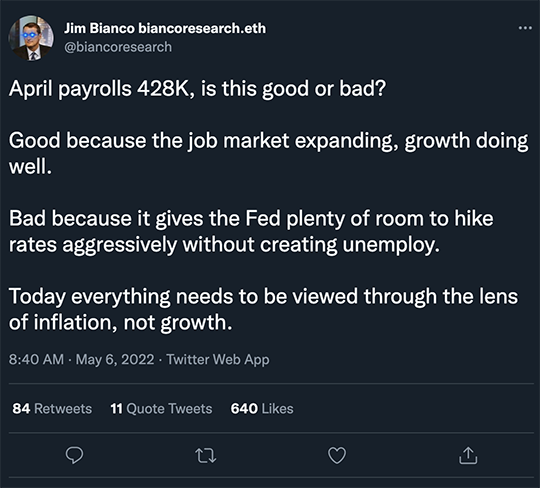 Actually, from where we sit, the good news about jobs ends there.

On the big chart from Calculated Risk, depicting the job losses and recoveries from every recession since World War II, the red line shows the United States is still 1.2 million jobs shy of pre-pandemic levels… 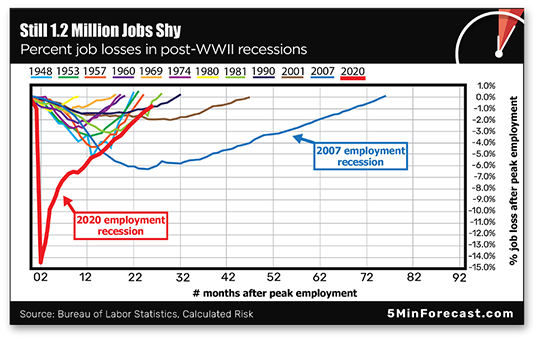 It’s enough to make you wonder whether the red line will get back to breakeven before a new recession begins. That would be a first in the postwar era.

The official unemployment rate held steady at 3.6% — mostly because 940,000 people departed the workforce during April. That means not only do they lack a job, they’ve given up looking for one.

Stripping out the statistical sleight-of-hand, the real-world unemployment rate from Shadow Government Statistics ticked up to 24.5% — where it was at the start of this year.

The elite media take on the official numbers is just insufferable. To wit, The New York Times…

And yet, at The Economist, those rising wages are cause for alarm: “America needs higher interest rates than any other big rich economy, because of its overheating economy and labor market.”

Which prompts the following reaction from our acquaintance Scott Horton, director of the Libertarian Institute…

A follow-up to the Federal Reserve meeting this week: A heretofore reliable indicator of the Fed’s intentions has gone haywire.

From time to time, we mention the trade in futures tied to the fed funds rate. They’ve often proven a more reliable indicator of the Fed’s intentions than the Fed’s own forecasts. They sussed out this week’s half-percentage point increase long before any Fed poobahs started talking about it publicly.

After the Fed made its move on Wednesday, chairman Jerome Powell ruled out a three-quarter-point increase at the Fed’s next meeting in mid-June. “[A] 75-basis-point increase is not something the committee is actively considering,” he told reporters.

And yet looking at the probabilities this morning, the sophisticated traders in derivatives linked to the fed funds rate are still pricing in an 81% likelihood of a 75-basis-point jump… There are only two possible conclusions…

Of course, conclusion No. 2 is rather more disturbing.

As disappointing as gold has been of late, it still looks good relative to other asset classes.

There’s been much chatter about the miserable performances of both stocks and bonds so far this year. That’s not how it usually works; bonds typically rally during times of stock market weakness. Indeed, that’s the whole premise behind a “60-40” portfolio consisting of 60% stocks and 40% bonds.

Over the years, we’ve always been more partial to the “Permanent Portfolio” strategy of the late newsletter guru Harry Browne — at least for the chunk of your holdings you consider long-haul investments and not short-term speculations.

It’s a simple allocation of 25% stocks, 25% bonds, 25% cash and 25% gold. Over the last 50 years, it’s been a solid performer. Maybe it’s not quite as strong as 100% stocks, but the advantage is there’s much less volatility, and thus much less temptation to submit to emotions — buying high and selling low.

And so, while a Permanent Portfolio is in the red for the year… gold is cushioning the blow of tumbling stocks and bonds. 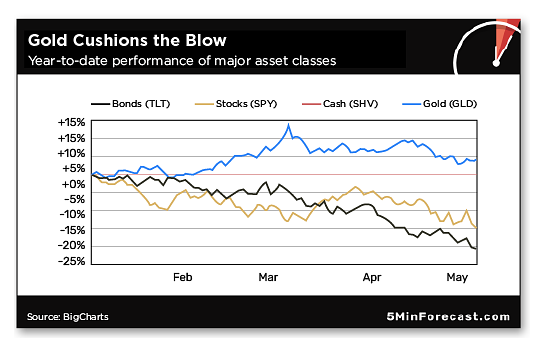 Yes, gold “should” be performing better in an inflationary environment. But on the other hand, it’s holding up relatively well in an environment of rising interest rates — where it typically performs poorly.

“I’m changing my mind on one of my favorite dividend stocks,” says our income-investing specialist Zach Scheidt.

The backdrop: “As U.S. interest rates move higher, international investors are moving capital into the U.S. to profit from these rates. More money moving to the U.S. naturally sends the U.S. dollar higher.”

Indeed, the U.S. dollar index — measuring the greenback against a basket of six other developed-world currencies — sits at a high-water mark last seen in early 2017.

That spells trouble for giant U.S.-based multinationals — for two reasons. “First,” says Zach, “customers in other countries have currencies that are weaker than the U.S. dollar. So that makes American goods and services more expensive when priced in these international currencies” — and thus, less competitive.

“The other challenge happens after American companies turn a profit in these international markets. Those profits must then be translated to U.S. dollars for reporting earnings to shareholders.

“So even if international companies grow overseas profits in euros or some other currency, the profits in U.S. dollars might actually decline.”

We won’t keep you in suspense: After several years, Zach is souring on Procter & Gamble (PG).

“The company makes dozens of great consumer products that you’re certainly familiar with. Cascade, Pampers, Charmin, Gillette and Pantene are just a few of the many brands that P&G sells.

“The stock has more than doubled over the last few years while also paying investors a steady dividend that continues to grow.”

But… PG generates about 58% of its sales overseas.

What’s more, “the stock is currently trading near peak valuation,” Zach tells us. “Investors are paying nearly 27 times expected profits to own this stock.

“That’s very expensive for a mature company like P&G and well above the historical value that investors have paid for this stock.”

Bottom line: PG is both vulnerable and overpriced. “It may take five years or more for the storm clouds to clear,” Zach surmises. “It’s not often that I recommend selling a company as strong as Procter & Gamble. But today, it makes sense to close this position and shoot for better profits elsewhere.”

Our daily foray into financial snark is a pop quiz, courtesy of a commenter at the Fark website…

If you guessed 4), step up and collect your prize.

Your editor was working in a Chicago newsroom when Boeing ditched Seattle for the Windy City in 2001. It was a big deal, even though the number of jobs was minuscule. The younger Mayor Daley teamed up with future felon Gov. George Ryan to throw beaucoup “incentives” at Boeing — more incentives than Denver and Dallas were offering, anyway.

As it happens, those incentives had a 20-year expiration date. So off to the Beltway goes Boeing.

The company occupied 13 floors of a 36-floor tower fronting the Chicago River — or it did until everyone started working from home. Per Colliers International, downtown Chicago’s office vacancy rate stood at 19.7% at the end of the first quarter — actually up from 17.9% at the end of Q4 2021.

To the mailbag: “I can empathize with the manager’s sign,” writes a reader responding to our item about the now-fired Dollar General manager in Indiana who sought to hire only baby boomers.

“At 68 and having moved back to the U.S. after 30 years overseas, I am amazed at the lack of the concept of a work ethic among some (many) in the younger generation; they have not been taught and perhaps it’s never been modeled to them.

“Having done AIDS research in the 1980s and also having a master’s degree in nonprofit management, I am saddened that at least some, perhaps many, of the 18–30 crowd does not understand what ‘work’ is.

“I work in a kiosk for minimum wage at a gas station, as I was getting bored in retirement. One person was let go and he asked me for a reference. I liked the guy, but asked him if I could give him one piece of advice — I told him to show initiative in his new job, as I said this alone will make you stand out from your peers.”

The 5: Cynical as we are, we’re actually feeling a bit of sympathy for the millennials today.

They pursued the American Dream as it was sold to them by the Establishment — racking up enormous student debt only to end up living in their parents’ basement after the 2008 crisis and later stuck driving Ubers or slinging lattes at Starbucks.

Even if they managed to scrimp and save, low interest rates forced them to gamble in the stock market if they were to have a prayer of saving up a down payment on a house… and when that gamble started to pay off in the post-COVID rally of 2020–21, housing became unaffordable because Blackstone and other companies with access to cheap capital courtesy of the Fed were buying up single-family homes and turning them into rentals.

Under those circumstances, maybe my attitude would suck too…

On the subject of Homeland Security’s new “Disinformation Governance Board,” one of our regulars writes…

“And the next new body they’ll create will be the ‘Ministry of Love,’ which will fall under the Department of Justice, as disseminating ‘disinformation’ will be classified an act of terrorism, and perpetrators will be declared criminally insane and an imminent threat to society.”

The 5: We’ll have a thing or two to say about the subject next week. Matter of fact, we were planning it for today until — uhhh, more urgent matters intervened.