Let’s see… How is Washington’s campaign of economic warfare against Moscow going? 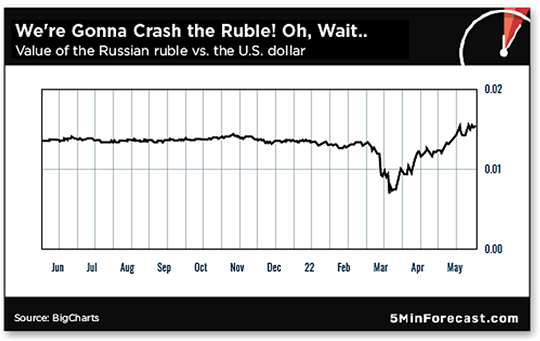 But it doesn’t end with the rebounding ruble. “Oil and natural gas prices are up,” our Jim Rickards reminds us; “so Putin has taken in about $60 billion in new sales since the invasion, mostly from Europe.

“Assets including yachts and townhouses in Belgravia owned by Russian oligarchs are being seized. Putin is fine with that because he despises the oligarchs. Putin’s support comes from the people, the Orthodox Church, the military and the intelligence services, not the oligarchs. He has long wanted to curb oligarch power but didn’t dare. Now the U.S. is doing Putin’s dirty work for him by crushing them. Putin should send Biden a polite thank-you card.

But hope in Washington springs eternal: “Treasury secretary Janet Yellen is stepping up talks with EU and G7 allies on a potential price cap or tariff on Russian oil,” the Financial Times reports.

European leaders are keen to end Russian oil exports in hopes of sticking it to Putin… but as we mentioned last month, Yellen doesn’t want it to happen too quickly. JPMorgan Chase forecasts $185 oil if Europe goes cold turkey — it’s a shade below $111 this morning — and that would be very, very bad for Democrats’ prospects in the U.S. midterm elections.

“The officials in the U.S. and EU who are imposing these sanctions don’t seem to understand that basic commodities, such as oil and natural gas, trade on world markets,” Jim Rickards says.

“If Europe can replace the energy, they will have to pay the world price even as Putin receives the same world price from India or others. That’s how commodity markets work. The only difference is the price will be higher for everyone, including drivers and homeowners in the U.S., because of the boycotts and sanctions.

“The biggest winner is Putin because he’s a net seller, not a buyer. The same dynamic will play out with strategic metals like aluminum, titanium, palladium, platinum; in precious metals like gold and silver; and in commodities markets for wheat, barley and corn.”

Like last week, Jim remains particularly alarmed by the prospect of “enormous destruction to global supply chains and possible mass starvation by late this year due to the ban on Russian exports of wheat and other grains and the impossibility of exports from Ukraine.

“While you’re reallocating your portfolio to account for this new reality, you may want to buy an extra freezer and stock up on beef, chicken and frozen vegetables. The food shortages are coming.”

Once you get that taken care of, you’ll want to examine Jim’s action plan for the next phase of the U.S. stock market’s downdraft. He says it’s baked into the cake based on his latest research into market patterns and intelligence. Give it a look at this link. 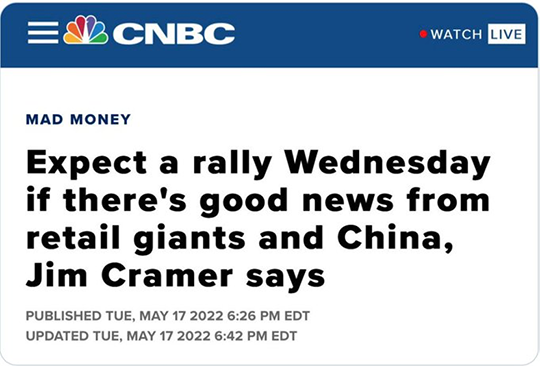 Heh… To be fair to Mr. Cramer, there was an “if” attached to his projection.

And in the event, Target’s quarterly numbers absolutely stunk up the joint — revenue was up, but costs were way up and as a result earnings missed expectations. (Walmart told much the same story yesterday.) TGT is down a staggering 24% as we write.

In addition, “Consumers are pushing back,” avers Morgan Stanley’s Andrew Slimmon. “It could be a situation where consumers are saying we’re not going to pay higher prices.”

Either way, in econ-speak, that’s “demand destruction” — exactly what the Federal Reserve wants right now to get inflation in check, seeing as it doesn’t have any control over the supply of oil or baby formula or semiconductors or anything else other than funny money.

The risk-off environment is helping bonds — prices up, yields down. The yield on a 10-year note is back to 2.93%. Alas, whatever signs of life precious metals exhibited yesterday have gone dormant again — gold at $1,816, silver at $21.48.

As noted earlier, crude sits a little below $111 — a drop from yesterday and partly a reaction to the Energy Department’s weekly inventory figures.

The major cryptos have sunk below round-number support. Indeed Bitcoin is threatening to break below $29,000, while Ethereum is down to $1,956.

Speaking of demand destruction… there are the latest housing numbers.

Housing starts as reported by the Commerce Department slipped 0.2% last month, while permits — a better indicator of future activity — fell 3.2%.

In its summary, Econoday tries to apply lipstick to the hog as best it can: In contrast with red-hot numbers late last year and early this year, the current figures are “consistent with a more sustainable pace of homebuilding in a modest economic expansion.”

“As we look at the market now, even the good stocks are getting beaten down,” says our value-minded dividend hound Zach Scheidt.

It’s one thing for the highflying tech and tech-adjacent names of 2021 to be getting slammed; as Zach has explained before, rising interest rates make it much harder for those companies to borrow the money they need to keep growing.

But why are good stocks getting dragged down with the bad?

“Let me tell you a story from 20 years ago at the very start of my hedge fund days,” says Zach.

“It was right after the peak of the dot-com crash. I was proud of the fund I worked at because we didn’t lose money as so many other investors did during the crash.

“But one day, my mentor Bill came into my office looking pretty frustrated and told me that we had to sell a bunch of our positions that day.”

The reason? Too many redemption letters were coming in. “It’s when your investors tell you that they need to pull cash out of their accounts. And that meant we had to sell some of our positions to free up their money.”

Why did they need the cash? “It’s because they lost money in so many other areas of the market. And they needed money to fund their day-to-day expenses. So they decided to pull their money out from the fund that still had money because we didn’t lose it during the dot-com crisis.”

Point being, “investors are doing pretty much the same thing today,” Zach says.

They either need to free up cash to pay their expenses or they’re afraid of the recent pullback. So they’re selling the stocks that have held up well since that’s where their profits are.

“That’s a big reason why quality stocks are trading lower here at the end of the recent bear market trend.

“I understand that it doesn’t make it any easier for you as someone holding onto these stocks. And it can be frustrating to see your investments trading lower. But I think it’s a sign that we could be nearing the end of this particular selling period.

“It also gives you the opportunity to buy more shares of quality stocks at a discount while they’re still trading lower.”

Well, this gives new meaning to the term “golden parachute”… 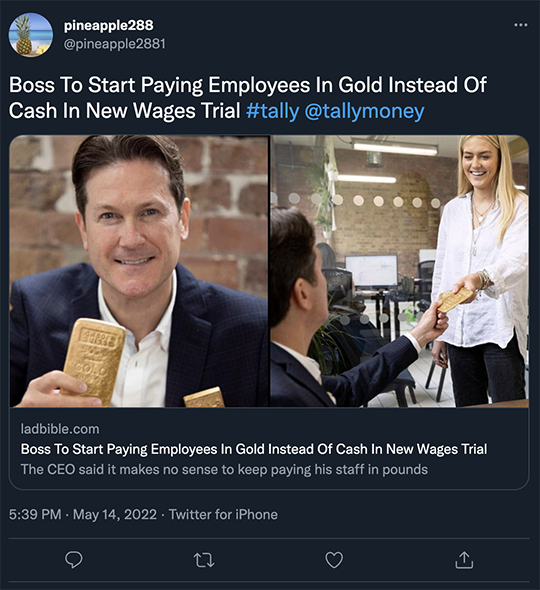 A small finance firm in the City of London is offering its 20 employees the option of getting paid in gold.

As noted here yesterday, a chart of gold priced in pounds looks pretty impressive — rising steadily for more than three months and only a bit below its all-time highs.

“With the cost-of-living crisis going from bad to worse,” says TallyMoney CEO Cameron Parry, “it didn’t make sense to continue offering pay hikes in pounds when its value is being eroded further with every passing day. It was like putting a Band-Aid over an open wound,” he tells local paper City A.M.

It only makes sense since gold is central to the firm’s business model: TallyMoney offers gold-backed debit accounts paying 2% interest. (The downside: If the gold price in pounds declines, so does the value of your account.)

Of course, there’s the not-small matter of payroll taxes: Those are “applied as normal,” says City A.M., “with the exchange rate for gold to pounds taken into account.”

“My wife’s daughter has a friend who was overjoyed on Monday to learn that her college debt of $30,000 was forgiven by the federal government.

“Did you have any idea that the program was active? It makes me ill to think that 50%-plus of the student-age population [that did not go to college] will be paying her and others’ loans.

“Have you heard of any others like this? BTW, this happened in California.”

That said, for the past 15 years, there’s been a “Public Service Loan Forgiveness” program for people working in government or for nonprofits.

But the program’s requirements are so byzantine that precious few borrowers have successfully jumped through all the program’s hoops — even if they manage to keep up 10 years of on-time monthly payments.

“Over the years, PSLF has spawned much confusion and frustration,” the Education Department acknowledged last June.

“Millions of people are employed in public service, including teachers, firefighters, law enforcement and some nonprofit workers, yet only about 5,500 borrowers have received PSLF discharges thus far, totaling $453 million.”

Maybe the friend of your wife’s daughter managed to pull it off?