Oh, no — here we go again. Only the mainstream is passing it off as new… 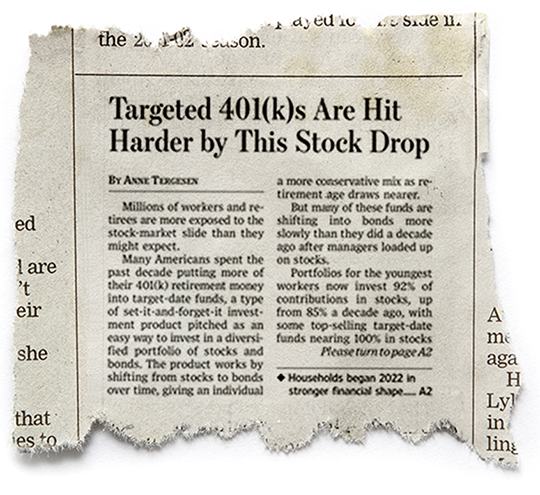 On the front page of today’s Wall Street Journal is a warning that during the present stock-market swoon, so-called “target date” funds are more heavily invested in stocks than their investors probably realize.

As you might already know, target date funds are the default choice in the vast majority of 401(k) plans nowadays. They’re designed around this question: What year do you plan to retire?

The fund manager constructs a portfolio of stocks and bonds based on that date and on the theory that as you get older your funds should be invested more “conservatively.” So if you’re young and won’t retire until 2060, chances are the fund will be heavily invested in stocks. If your target date is 2030, bonds should make up a much bigger portion of the mix.

The operative word there is “should.”

Per the Journal article, “Many of these funds are shifting into bonds more slowly than they did a decade ago after managers loaded up on stocks.” According to figures from Morningstar, a typical 45-year-old in a target date fund is currently 82% invested in stocks — up from 69% a decade ago. Even retirement-age workers have a slightly bigger stock exposure — 46% now versus 43% in 2011.

“For more than a decade, the strategy was a boon for investors,” the article goes on. “But now, with the S&P 500 on Friday closing about 19% below its peak, the strategy is facing a test.”

What the Journal doesn’t tell you is that the strategy has faced a previous test — and failed.

Your editor performed some deep-dive research into target date funds during 2015 for our firm’s gone-but-not-forgotten Laissez-Faire Letter.

One of my findings is especially relevant now: During 2007 and 2008, many of the target date funds hypothetically geared toward older workers were still heavily invested in stocks. The typical fund with a target date of 2010 fell 40% during 2008 — even more than the broad stock market.

“It will be interesting to see if investors are able to stick with the greater volatility in these portfolios or if they start selling, which could cause them to miss out on a rebound,” Morningstar analyst Megan Pacholok tells the Journal.

So far, that’s not been the case. A mere 0.9% of savers in Vanguard target date funds have made trades this year.

For their part, fund managers are flattering themselves with the fantasy that they have legions of savvy account holders who are invested for the long haul. “People aren’t making emotionally driven, often ill-advised decisions” reacting to market volatility, says Vanguard’s David Stinnett.

Hmmm… My 2015 research turned up a survey by Behavioral Research Associates. People who invested in target date funds were asked questions like these…

Other surveys by the likes of AllianceBernstein and even the Securities and Exchange Commission turned up similar results.

I strongly doubt the typical 401(k) account holder — preoccupied with work and family and doctor visits and soccer practices — is any more savvy now than they were in 2015. I daresay ignorance is the reason they’re not panic-selling.

But target date funds have an even bigger problem now — one the Journal article mostly glosses over.

Not only have stocks been lousy performers year to date — so have bonds. As we’ve mentioned now and then, that’s an atypical situation — at least if you’re using the last 40 years as your guide.

But there’s a reasonable probability that the 2020s are shaping up to be a decade similar to the inflationary 1970s — stock portfolios in the doldrums even as bond portfolios are crushed by rising interest rates.

Unfortunately, there’s no such thing as a target date fund with a commodities component.

Hopefully this isn’t an issue for you: Either you’re retired already and converted your 401(k) to an IRA… or your employer offers enough choices in your 401(k) that you’re not locked into a target date fund.

But for millions of working-age Americans who have no choice, a lot more tears are in store. That is, if they even realize how much of a hit their account balances have taken this year.

➢ Cold comfort: One thing that has changed since my original 2015 research is the fee structure for target date funds. Back then, the typical fund had an expense ratio of 1.08%. But by 2020, the low-fee wars in the fund industry brought that average down to a less-outrageous 0.52%.

To the markets today… where the major U.S. stock indexes are giving back a fair chunk of yesterday’s gains.

Tech is getting sold mercilessly after Snapchat parent Snap Inc. reported quarterly sales and profits lower than it projected only a month ago. That bodes ill for bigger players in the online-ad business. (Talkin’ ‘bout you, Google and Facebook.) At last check, SNAP is down — gulp — over 40% on the day.

Precious metals continue their quiet rally — gold back to $1,865 and silver over $22 for the first time in more than two weeks. Crude is back above $110. But the flagship cryptos are breaking down again — Bitcoin a hair above $29,000 and Ethereum at $1,934.

The day’s economic numbers fooled all the “experts” — unfortunately, to the downside.

The “flash PMI” number for May from Standard & Poor’s rings in at 53.8 — lower than the lowest guess among dozens of economists polled by Econoday. The manufacturing component registers 57.5 and services 53.5. Again, no one figured the numbers would be that low.

The only comfort is that they’re still above the 50 dividing line between growth and contraction — so not a recessionary print, but definitely a slowdown. Blame it on rising prices… as well as weaker demand growth.

New home sales also went “clank” — tumbling 16.6% in April, and that’s from a revised-lower March figure. Again, no one among the “expert consensus” saw it coming. Inventory is up to 9.0 months’ worth — the highest since May 2010. But the median price for new construction still rose — to a blistering $450,600.

Econoday’s summary bows to the inevitable — and the obvious: “The boom brought on by historic lows in mortgage rates and by changing housing needs during the pandemic, and later by rising incomes and rental costs, is pretty much over.”

“We’ve been undergoing the worst biotech market in the past 30 years,” says our Ray Blanco.

“It’s gotten so bad that biotech stocks are down 63% since they peaked early last year. In fact, Bloomberg recently reported that out of the Nasdaq Biotech Index, 86 stocks are trading for less than cash.”

As you can imagine, companies whose market caps are smaller than their cash on hand are outstanding bargains — and investors might be waking up to those bargains this month. Ray noticed a 5% pop in the SPDR S&P Biotech ETF (XBI) a week ago today — right off important chart support at $65. This morning, it’s $68.30.

“We saw a similar experience during the COVID-related sell-off that hit stocks back in 2020,” Ray reminds us. “Investors then got excited about biotech stocks since one of the lead stories involved all the biotech companies working on vaccines and therapies to get us out of this COVID-19 crisis. Unfortunately, that enthusiasm waned, and the sector has sold off strongly since.”

Is this the start of a new biotech bull? Ray says it’s too soon to make that call… but he’s got his eyes peeled and he’ll keep us in the loop.

To the mailbag: “Since the student loan subject just won’t die amongst your readership, let me add my own 200 cents’ worth (inflation, dontcha know)…

“When my children were old enough to understand the idea that they might actually desire to continue school after their mandatory prison sentence was lifted upon completing Grade 12, I informed them that they were on their own. Daddy wasn’t going to pay for college.

“My rationale was very simple, and based entirely on my own observations during my college career. The folks who paid their own way generally benefited a great deal from their college education and experience. The ones for whom Daddy paid did not value it, often failed out or barely got by and were often in some way, shape or form in the way of those endeavoring to actually obtain a useful education.

“Fast-forward to the present day: My eldest attended a state university, which, including housing, mandatory meal plan, tuition, fees, books, etc., was roughly $30K per year. Times four years, roughly $120K. She did have an $8K/year scholarship, so knock her out-of-pocket cost down to about $88,000.

“My suggestion for those who managed to obtain six figures’ worth of student loan debt? Be grateful.

“My daughter, while not preferring the route of debt, would have loved to receive such an offer, and to actually be able to rest a little between semesters and not have to work quite so much. What she was offered in total over four years wouldn’t have paid for even one year.

“You got $100,000-plus in loans that somebody was willing to give you so you could pursue your educational/vocational dreams? Be very grateful. Not everybody gets such an opportunity.”

“Thank you for your brief coverage of the Jif peanut butter recall. Your piece was my first notice of it.

“I actually have two jars of the relevant batch numbers. J.M. Smucker’s phone numbers have recordings admitting to ‘wait times over one hour’ and referring callers to the website to get a refund.

“The website (jif.com) has a ‘Contact Us’ function, where they allow questions and comments, so this is presumably where you ask how to get a refund. But it requires that you enter your name, street address, email address, phone number and birth month and year.

“This is just brilliant — add an even worse P.R. fiasco to an already bad enough one, and a plant shutdown! I will switch to Skippy, probably permanently, not because of the possible Jif product contamination, but because of the ‘We must know almost everything about you to talk to you’ approach Smucker has taken.

“And for anybody (especially corporate executives) who think that complaining customers are just a nuisance, I was in marketing for industrial (B2B) products long enough to know that for every customer who actually bothers to contact the company and complain, there are about five additional customers who just ‘vote with their feet’ and stop using your company’s product, and maybe all of your company’s products, without telling you.

“That’s for industrial products. For consumer products, that ratio is not five, but at least 10 and probably 20.

“I appreciate your daily commentary — keep up the good work!”

The 5: In pre-internet days, our rule of thumb in the newsroom was that for every viewer who phoned in to complain about something, there were 10 more — equally upset — who did not…